Objective: To determine the type and sensitivity pattern of causative organisms of septicaemia in intensive care unit, to prepare a guideline for empirical antibiotic therapy.
Setting: Department of pathology and adult medical intensive care unit, PNS SHIFA (Naval Hospital), Karachi
Methods: The study was conducted from January 1997 to June 1999. Blood specimens for culture were drawn from patients who developed symptoms/signs of bacteraemia/septicaemia 48 hours or more after admission in medical ICU. The specimens were inoculated into Brain Heart Infusion broth. Subcultures were done on days 1,2,3,5,7 and 10. The isolates were identified by standard biochemical tests. Antibiotic susceptibility pattern of the isolates was studied by Modified Kirby Baur method.
Results: Eighty-six aerobic organisms were isolated. They included Staphylococcus aureus.(n=34), Pseudomonas aeruginosa (n=13), Escherichia coli and Enterobacter spp(n=9 each), Klebsiella pneumoniae(n=8), Acinetobacter spp and Serratia spp(n=5 each), Citrobacter diversus(n2) and Proteus vulgaris(n=1). On antibiotic susceptibility testing, 48.18% Staphylococcus aureus isolates were methicillin resistant. Susceptibility to other common drugs was also quite low while 100% of these were susceptible to vancomycin and amikacin. In case of gram negative rods more than 80% were resistant to ampicillin and co­trimoxazole. Susceptibility to gentamicin was as low as 25% for Klebsiella pneumoniae to 44.4% in case of Escherichia coli. Susceptibility to the third generation cephalosporins and the quinolone tested (ciprofloxacin) varied between 50-75%. All these isolates except Pseudomonas aeruginosa were susceptible to imipenem and amikacin.
Conclusion: In view of the isolation of antibiotic resistant organisms, vancomycin in combination with amikacin or imipenem are the drugs of choice for empirically treating blood stream infections in CU. Infection control procedures and antibiotic control policies can help to tackle this problem (JPMA 51:213;2001).

Infections are amortg the most difficult problems confronting clinicians managing intensive care unit (ICU) patients. ICIJ patients are 5-10 times more likely to acquire nosocomial infections than other hospitalised patients1. An in fection incidence of 28% among patients in ICUs has been reported2. The nature of ICU environment is such, that it makes it a focus for the emergence and spread of antibiotic resistant pathogens. Excessive use of broad spectrum antibiotics, immunocomprom ised hosts, use of catheters and invasive procedures make the ICU patients susceptible to colonization with highly resistant pathogens3. Septicaernia accounts for 19% of the total ICU infections, third after the urinary and respiratory tract infections4.
Gram positive otganisms are the most common cause but gram negative bacteria carry a higher risk of sepsis, septic shock and death5. Hospital acquired bacteraemia carries a poor prognosis. Prior knowledge of infecting organisms and their sensitivity6, as is determined in this study are essential for selection of empirical antibiotic therapy.

This study was conducted at the department of’ Pathology, PNS SHIFA, Karachi during a period extending from Jan 1997 to June 1999. The cases admitted in adult medical ICU and developing symptoms/signs of septicaemia 48 hours or more after admission, were included in the study. Five ml of blood was collected aseptically for culture from all these cases. The specimens were inoculated directly into 50 ml of Brain Heart Infusion broth (Difco). The inoculated broth bottles were incubated at 37 °C The subcultures were done on Blood and MacConkey agar plates on days I .2,3,5,and 7. The colonies isolated were identified by Gram’s stain, conventional biochemical tests using methods of Cowan and Steel7 and also by using API 20 E galleries (System Montalieu Vercieu, France) for enterobacteriaceae. Antibiotic susceptibility pattern of the isolates was studied by using Modified Kirby Baur disc diffusion technique8. Staphylococcus azireus ATCC 25932, Escherichia coli ATCC 25922 and Pseudomonas aeruginosa ATCC 27853 were included as control strains.

Majority of the cases were male (11=56) and the rest were female (n=30). The age range was from 15 to 79 years but majority were in their fifth and sixth decades. Eighty-six blood cultures yielded growth of aerobic organisms. The organisms isolated were Staphylococcus aureus 3 9.53%(n34), Pseudomonas aeruginosa 1 5. 11 %(n 3), Escherichia coli and Enterobacter cloacae each I 0.46%(n9), Kiebsiellu pneuinoniae 9.3 0%(n=8). Acinetohacter baumannii and Serratia marcescans each 5.81%(n=5), Citrobacter diversus 2.32%(n=2) and Proteus vulgar/s 1.16%(n=1). The results of antibiotic susceptibility testing of Staphylococcus aureus, Pseudornonas aeruginosa and Escherichia coli is as shown in Table 1. 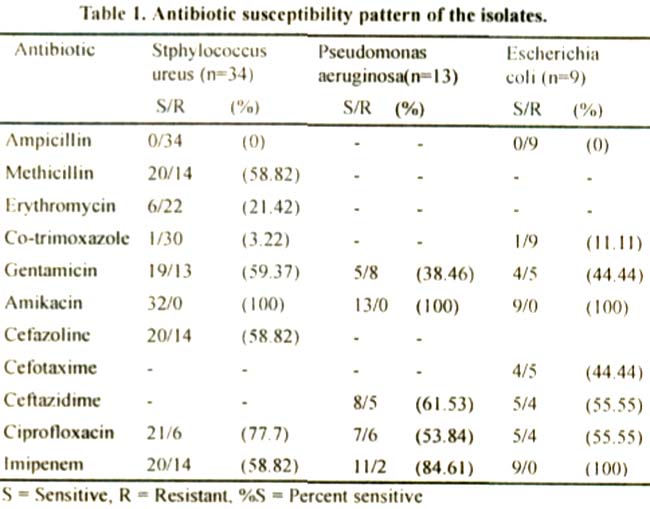 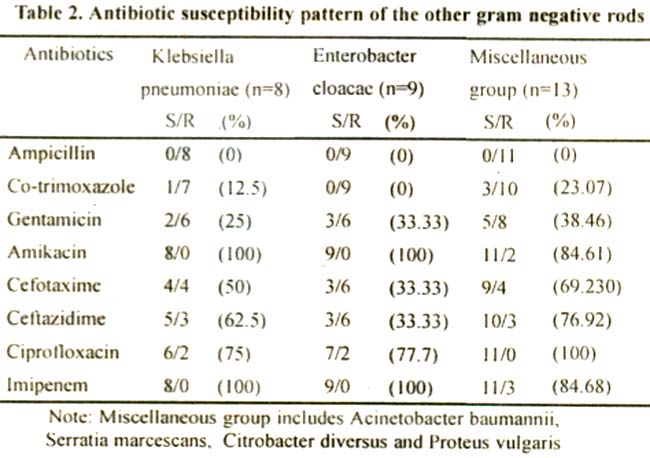 Intensive care units are generally considered epicenters of antibiotic resistance and principal sources of outbreaks of multi-resistant bacteria9. Antibiotic strategies to combat ICU infections are controversial. Therapy is usually empirical. The fact that many patients in ICUs are colonised with resistant or multi-resistant bacteria poses a fundamental challenge to the development of an effective antibiotic strategy10. For effective of antibiotic therapy, the knowledge of the likely organisms is essential. In this study about 40% of infections have been caused by Staphylococcus aureus, and the rest by the gram-negative rods. In Kuwait, 46.8% of the infections reported have been caused by gram positive cocci and the gram negative rods isolated were similar to those found in our study i.e. Enterobacter spp. Klebsiella pneumoniae and Serratia spp6. A similar group of gram negative rods including Escherichia coli (43%), Klebsiella pneumoniae (18%), Acinetobacter spp (7%) was reported and Enterobacter Spp (7%) in a study conducted at Karachi11. More than one third (41 . 1 8%) of Staphylococcus aureus isolates in present series were methicillin resistant. Susceptibility to the other common drugs was also quite low while 100% of these were susceptible to vancomycin and amikacin. In case of gram negative rods more than 80% were resistant to ampicillin and co-trimoxazole. Susceptibility to gentamicin was as low as 25% for Klebsiella pneumoniae to 44.4% in case of Escherichia coli. Susceptibility to the third generation cephalosporins and the quinolone tested (ciprofloxacin) varied between 50-75%. Susceptibility of Enterobacter cloacae to third generation cephalosporins was 33.3%. Enterobacter spp rapidly develop such resistance, the mechanism described is of inducible beta-lactamase production12. All the isolates except Pseudomonas aeruginosa were susceptible to amikacin and imipenem. Susceptibility to imipenem in case of Pseudomonas aeruginosa was 84.6 1%. Bush sykes class 1 enzyme along with porin deletion have been described to provide resistance against carbapenems in case of Pseudomonas aeruginosa13. In this study vancomycin and amikacin are the most effective drugs for Staphylococcus aureus and amikacin and imipenern for gram negative rods while the third generation cephalosporins and ciprofloxacin have intermediate position. So empirically a combination of vancomycin and imipenem or amikacin has to be used to be really effective for blood stream infections in this setting. Third generation cephalosporins and quinolones can be used once the antibiotic susceptibility results are available. This situation is quite serious as vancomycin, amikacin and imipenem are the last line available. If used frequently, resistance will obviously emerge and spread against these as well. To tackle this problem a comprehensive as previously described approach is suggested. This includes unit based microbiological surveillance, reinforcement of infection control procedures (hand washing), appropriate isolation and barrier precautions for patients infected or colonised with resistant organisms and antibiotic control policies14.