Objectives: To find out the incidence of p53 mutations and their possible correlation with clinicopathological presentation in females with breast carcinoma.
Settings: Department of Surgery, Pakistan Institute of Medical Sciences, lslamabad.
Patients and Methods: Seventy four patients with operable carcinoma breast that underwent mastectomy were included in this prospective study. Tumour tissue specimens and peripheral blood samples were examined for p53 mutations. Age, tumour size, nodal status and histopathology was assessed in patients with and without p53 mutations.
Results: Ten (13.5%) patients showed p53 mutations in their tumour specimens while 64 (86.48%) had normally functioning p53 gene. Patients were divided into two groups, A (normally functioning p53), and B (mutated p53). Intraductal carcinoma was the most frequent histological variant(A=57, B=10), while lymph nodes were involved in 67.19% (A=47) and 60%(B=6) cases respectively.
The age of patients and clinical parameters (tumour size, nodal status and histopathological diagnosis) were compared between the two groups and no statistically significant correlation between p53 mutations and clinicopathological parameters was found.
Conclusions: It was concluded that p53 mutation is present in carcinoma breast in Pakistani population but there was no significant correlation between p53 mutation and tumour aggressiveness (size, nodal status and histopathology) (JPMA 51:21 0;2001).

Carcinoma breast is the commonest tumour and the leading cause of death worldwide1 and is also the commonest malignant tumour in Pakistani females2,3.
Of the various risk factors known or believed to cause cancer (smoking, diet, alcohol, environment and life style), genetics in the recent years have reached the attention of most clinicians and researchers. Molecular biologists now believe that tumour suppressor genes are central to the development of most, if not all tumours in human beings4-6.
p53 appears to be involved in up to 50% of human tumours, with the highest incidence in lung and gastrointestinal tumours6-9 and a significant number of breast cancers10-14 Breast tumours with p53 mutations have been shown to be more aggressive and present at a more advanced stage15-17. Although some studies have shown positive correlation, others deny any significant association between p53 mutations and clinicopathological features of the diseas&8.
This study was undertaken to see the difference in clinical presentation; (regarding age, tumour size, nodal status, metastasis and histopathology), of patients exhibiting p53 mutations, from those without p53 mutations.

This study was carried out at the Pakistan Institute of Medical Sciences, Islamabad in collaboration with A. Q. Khan Research Laboratories (Bio-engineering and Genetics Division). Seventy four female patients with operable breast cancer were included in the study. The medical and pathological data regarding stage of the disease, number of lymph nodes involved, histopathology and presence or absence of p53 mutations, was collected.
Patients were staged according to the American Joint Commission Staging System (TNM). The histopathological diagnosis was reached by trucut, excision or incision biopsy of the tumour and later confirmed by repeat histopathology of the excised tumour and involved lymph nodes, if any. Modified radical mastectomy was performed in all the cases. A tumour specimen was taken immediately after excision and frozen at -70 degree Celsius and later sent to the bioengineering and genetic Laboratory for screening of p53 mutations, along with peripheral blood sample of the same patient.
The clinicopathological parameters of the patients with p53 mutations were compared with that of the patients not exhibiting such change, with the help of student t test, and ‘p’ value of < 0.05 was considered significant. 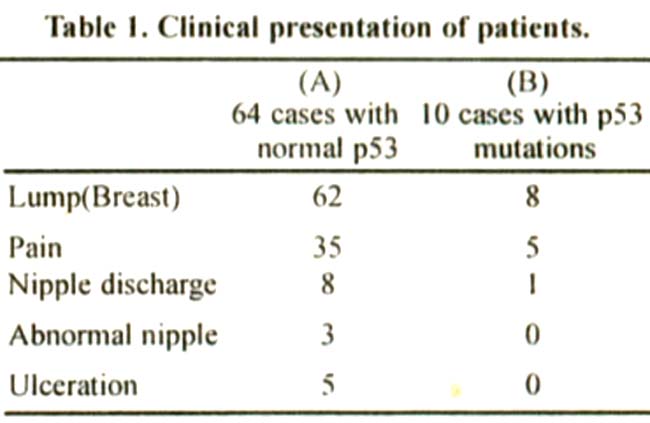 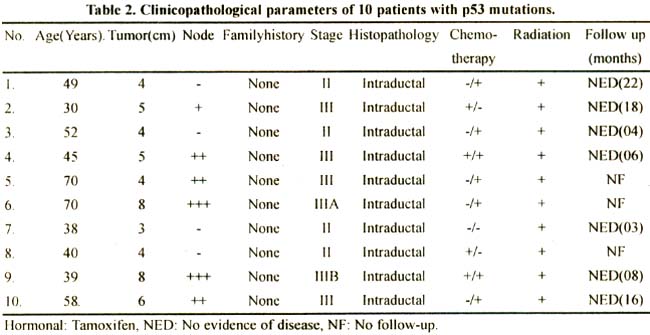 Most of the patients (A=62, B=8), presented with a painless lump in the breast, followed by (A=35, B=5) and (A8, B=1) having pain and nipple discharge respectively.
Upper, outer quadrant was involved in most of the cases (A=37, B6). There was no family history of breast cancer disease in any of the patients At 3 months follow up. 7 patients were alive with no evidence of the disease and 3 were lost to follow up. No significant correlation was found regarding the clinicopathological features of the disease in the two grouPS.

Recently, p53 mutations have been implicated in a number of human malignancies including breast carcinoma5. p53 belongs to the class of tumour suppressors and it occupies a pivotal role in the control of deciding the fate of the cells, especially those who have been stressed. So the genetically damaged cells owe their removal to the functioning normal p53 gene and damage to the gene itself may allow the cells bearing other mutant genes to proliferate unchecked.
Alteration of the p53 gene and its encoded protein is the most frequently encountered genetic event in human malignancy. p53 is a phospoprotein containing 393 aminoacids, it resides in the nucleus of the cell and is located on the short arm of the human chromosome 17, band 13 and is approximately 20 Kilo bases in length.
The spectrum of mutations at the p53 locus indicates that different environmental mutagens are likely to be involved18. Keeping in view the involvement of p53 in carcinogenesis as described by over 10,000 papers published so far, it was reasonable to expect p53 mutations in Pakistani breast cancer patients.
Despite the vast amount of information now available, it must be stressed, that little is surely known about the exact mechanism of p53 function. Recently, homologues of p5319-22 and an mdm-2 related protein (mdm-x)23 have been described to have important implications. It seems possible that these homologues make up a family of molecules with similar effects but induced by different signals and therefore play fundamentally different roles in cellular hemostasis.
It can be concluded, that if any adverse prognostic effect is present, it probably is too small to be depicted in this study conducted on a limited number of cases and that more studies are required to confirm its role, although recent studies even with a significantly large number of patients of breast cancer have failed to confirm any prognostic significance of p53 mutation. This may be, because of the fact that, malignant transformation has already occurred indicating a fundamental breakdown of cellular control and there is no good reason to believe, whether the p53 mutations have or have not contributed to this process, especially when the patients rarely present at an early stage of the disease, so was the case in our study, with most of the patients presenting in stage II and III.
p53 mutations are not a consistent finding in breast cancers of the same histopathologic nature. The sensitivity of this approach is poor, but the specificity is very high and p53 mutation screening in suspicious specimens may prove to be a useful adjunct to morphological assessment. Interest is building in the detection of p53 mutations in blood cells as a marker of residual disease after surgery, but encouraging reports in this regard are still awaited.

Thanks are due to the people at the Bio-engineering and Genetics Division of A.Q. Khan Research Laboratories for their technical support in topographic genotyping of tumour specimens.