Augmentation of anti-platelet effects of Aspirin by chocolate

Objective: To establish the anti-platelet or aspirin like effects of flavonoid rich food (chocolate).
Methods: This was a non-randomized quasi experimental study in which, 65 healthy adult volunteers, 27 males and 38 females, participated. The subjects included were healthy, non-smoking adults. Health of subjects was evaluated by a questionnaire for which a written informed consent was taken prior to admission in the study. Research protocol was approved by the college\\\'s, "Research and Ethical committee". Division of subjects into two groups, a control group which consumed 100mgs of oral aspirin and an interventional group consuming 100mgs oral aspirin and 18.75gms of dark chocolate (flavonoid rich), was carried out. The Bleeding time estimation for both the groups was done by "Duke Method" of bleeding time estimation.
Results: Data was analyzed by SPSS 15.0. First, a bivariate analysis was done by comparing both the pre-test groups i.e. before consumption of aspirin and also before consumption of chocolate and aspirin together through independent t-test Later, regression analysis was also done. Bivariate analysis compared both the control and interventional groups. After comparing pre-test groups a p-value of 0.798 was obtained and after comparing post test groups a p-value of 0.006 was determined. Regression analysis yeilded an R-square of 0.25.
Conclusion: Chocolate has a significant role in augmenting the anti-platelet effects of aspirin.
Keywords: Chocolate, Anti-platelet, Aspirin (JPMA 61:304; 2011).

Aspirin ingestion alters platelet function. These effects are due to an irreversible inhibition of cycloxegenase, an enzyme of prostaglandin biosynthesis.1 The product of cyclooxygenase, Prostaglandin G2 in platelets is converted to thromboxane A2.2Thromboxane A2 can stimulate the platelet degranulation and vasoconstriction; its release into the plasma could mediate the vasospasm accompanying thrombotic episodes. Therefore, by blocking the production of PG G2 and thromboxane A2 in platelets, aspirin may have anti thrombotic effects and prolongation of bleeding time.3 Some foods and beverages rich in flavonols and flavonoids (e.g. grape juice, tea, cocoa and chocolate) have been shown to exert an antiplatelet effect similar to asprin in healthy human subjects suggesting the advantage of these food products with respect to platelet function.4,5 The flavonoids are the largest and most widely distributed class of phytochemicals, and can be found in foods such as cocoa and chocolate.6 It is now recognized that flavonoids can affect a variety of enzymatic, inter and intra cellular systems which can modulate immune function, inflammatory processes, vascular reactivity, antioxidant mechanisms, cell proliferation and platelet function including bleeding time. Research suggests consumption of chocolate prolongs bleeding time.7 Since ancient times chocolate has been used as a medical remedy and has been proposed to prevent various chronic diseases.8,9 Chocolate consumption has increased in the past half decade in all countries and with prophylactic use of aspirin for myocardial infarction and other vascular diseases.10,11 In this study we aim to elaborate the augmentary anti platelet effects of aspirin by chocolate to open a new door into medical discoveries in relation to vascular health and chocolate products.
In recent past research has been done in more developed countries but there is no experimental evidence in our part of the world. Therefore, it is important to consider the aspirin like anti-platelet effects of chocolate and highlight the importance of this food in our lives. This study was under taken to establish the anti platelet or aspirin like effects of flavinoid rich food.

This was a non - randomized qausi experimental study conducted at Karachi Medical and Dental College and Abbassi Shaheed hospital from August 2008 to September 2008. Sixty five healthy adult volunteers; 38 female and 27 males participated in the study. Subjects included in the study were healthy, non-smoking, between 20-30 years of age, with no history of blood dyscrasias, diabetes mellitus, cirrhosis, and ischaemic heart disease and no recent doctor visits. All the females were pre menopausal, non-pregnant and were not taking estrogen. Subjects consuming drugs that affect platelet activity or bleeding time were excluded from the study. All the participants gave written, informed consent before participation in the study, the study protocol was approved by the "Karachi Medical and Dental College", Research and Ethical Committee.
After the consent, subjects\\\' medical fitness was evaluated by a questionnaire. Subjects were asked to refrain from NSAIDS for 6 days, grape juice, onion, caffeine, theobromine and flavonoid containing beverages for 12 hours prior to the study. Subjects were asked to show up at the haematology laboratory in the morning at any time in between 8.30 to 9.30 am without having breakfast. The subjects were divided into two groups, group 1 containing 31 subjects and group 2 containing 34 subjects. Group 1 (control group) and group 2 (interventional group) Bleeding time estimation of subjects were done by trained laboratory professionals who were wearing sterile gloves and aprons and were blinded of the nature of the study. The method used for bleeding time estimation was "Duke Method" in which subjects\\\' middle finger was first cleaned with an alcohol swab. The skin area was rubbed briskly with the swab pad and the swab was discarded after single use. The swab contained 70% isopropyl alcohol. Then the cleaned finger was pricked by a sterile and sealed lancet needle of stainless steel (Blood Lancets), which was then discarded. Bleeding time was recorded on a filter paper which was portioned into segments labeled as 15 seconds each. The time was measured with the help of a digital stop watch. Readings were recorded along with the name and each subject was given a registration number. Cocoa causes aspirin like effects on platelet i.e. impaired primary haemostasis which is solely dependent on platelet plug formation and since bleeding time evaluates platelet function, Duke method can be used. The subjects in the control group were those who consumed aspirin only and subjects in the interventional group were those who consumed aspirin along with Dark chocolate.
Subjects in group 1 consumed 100 mgs of oral aspirin12 with one glass of tap water. The dose of 100 mgs was used because this is in range with the dose of aspirin required to produce its antiplatelet effects Subjects in group 2 consumed 100 mgs of oral aspirin along with 18.75 gms of flavonoid rich Dark chocolate (MARS) which also contained milk, sugar and butter. Subjects were given a two hour break, and were asked to refrain from food stuff during that period and were requested to return to the laboratory after two hours. Their bleeding time was again determined by the same method described above and their readings were recorded once again.
Their data along with the data obtained through the questionnaire were statistically analyzed using a Statistical Programme SPSS 15.0. 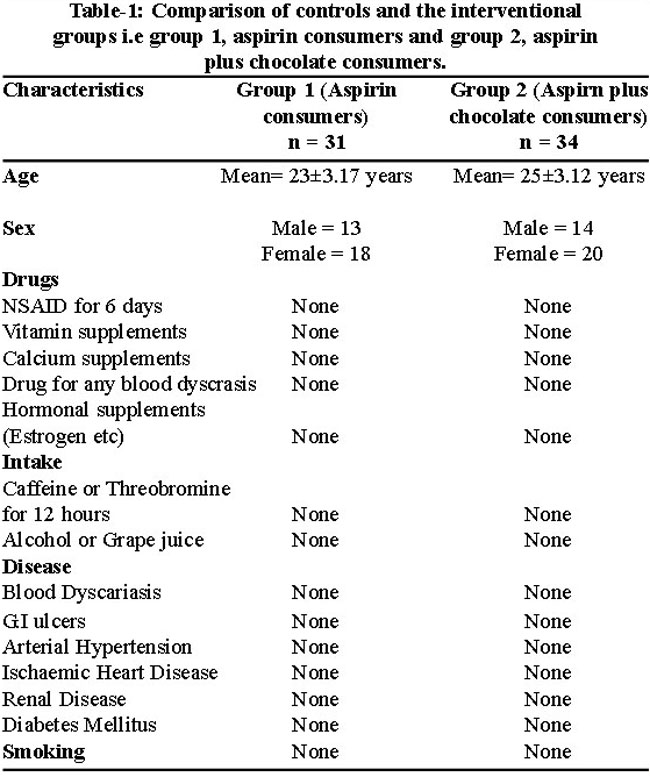 Table-1 showed health and intake comparison between the interventional and the control group depicting that both the groups were same at the start of the experiment.
The two main statistical techniques used were bivariate analysis and multivariate regression analysis model

Table-2 shows bleeding time comparison of both the groups before and after the experiment.
Furthermore, multiple regression analysis was also done for which multivariate regression models were used. In the regression models among the constant variables, sex, age, acute and systemic infections were applied and for dependent variables, bleeding time for both the control and intervention were used. The model summary for the multivariate regression analysis showing R-square of 0.250 which showed that the confounding variables had contributed by 25% in the result.

The putative health benefits of chocolate, a flavonoid rich food, have been in focus for the past seven years and the beneficial role of aspirin has also been established in the prophylaxis of myocardial infarction as well as in patients with other cardiac pathologies.13 A meta analysis also proved a potential role of chocolate in decreasing mortality in patients with cardiovascular diseases and protection against ischaemic strokes8 and our study supports that beneficial effects of the flavonoid rich dark chocolate is through the inhibition of platelet function. A study by Rein et al14 postulated that consumption of chocolate (flavonoid rich cocoa) can significantly alter platelet function by inhibiting the platelet activation markers in response to certain weak agonists, and in turn can prolong platelet - dependent primary haemostasis. In our current paper, we confirmed, and extended, these results by comparing the platelet related effects of flavonol rich chocolate to aspirin.
There is a constellation of mechanisms by which flavonoids exert their anti platelet effects. Cocoa and chocolate consumption cause aspirin like effects on platelets i.e. impaired primary haemostasis which is solely dependent on platelet plug formation and since bleeding time evaluates platelet function, we took bleeding time measurements as our primary variable for the evaluation of platelet activity.15 Flavonoids present in chocolate exert their anti-platelet action due to their effects on vessel wall stress. They decrease vessel wall stress which in turn decreases platelet adhesion.16 Moreover, dietary flavonoids can increase nitric oxide which in turn can decrease platelet adhesion17 and ultimately increase the bleeding time. We hypothesized that the flavonoids in the chocolate are responsible for the anti-platelet effects which is in resonance with the prolongation of bleeding time duration. Scramm and colleagues18 provided evidence that dark chocolate consumption alters the eicosanoid ratio, increasing the prostacyclin which is an anti aggregator of platelets and on the other hand decreasing the leukotrienes which promote platelet aggregation. Any anti-oxidant effect observed with chocolate can be attributed to the milk content of chocolate but milk itself does not have any antiplatelet effects.19
Aspirin is a cyclooxygenase inhibitor and because of this it blocks the synthesis of prostaglandin G2, which is involved in platelet aggregation and degranulation. A role similar to that of the anti-platelet effects of flavonoids. Our study evaluated the augmentary role of flavonoids rich chocolate in the anti-platelet effects of aspirin.
Regular consumption of aspirin can decrease the risk of myocardial infarction and stroke.20,21 Cocoa consumption in chocolate is found to be inversely related to increased arterial blood pressure which has a causual association with mortality. Regular intake of active cocoa components like chocolate may contribute in lowering the risk of thrombosis. Platelet suppressive effects of aspirin, an inhibitor of arachidonic acid metabolism and thromboxane A2, may be complemented by cocoa (chocolate) consumption.
To summarize, our study shows the aspirin like anti-platelet effects of flavonoid rich chocolate augmentate the anti platelet effects of aspirin when used in conjunction. This provides a very strong rationale for further investigating the other possible interaction between chocolate and aspirin, so that this possible augmentary role of chocolate in aspirin functions can be used for assessing the different therapeutic benefits of chocolate consumption along with aspirin in improving vascular functions.

Health related quality of life in pregnant women: A comparison between urban and rural populations

Association between maternal age and pregnancy outcome: implications for the Pakistani society

Expectations, competition and stress — A portrayal of a medical student’s journey