Spurious hyperkalaemia is a clinical condition in which there is an artifactual elevation of the serum potassium level due to a variety of possible causes.1 It is defined as the serum potassium concentration exceeds that of plasma by more than 0.4mmol/l, provided that sample is collected under strict techniques, remain at room temperature and are tested within an hour from blood specimen collection.2 Spurious hyperkalaemia can cause major difficulties in primary care and is a source of avoidable emergency referral and even admission to hospital. Laboratory analysis requires proper specimen collection, identification, processing, and chemical analysis. A failure in the first several steps (the incorrect sample collection or its mislabeling, etc.) usually is a clerical error that will be discovered and corrected when the test is repeated. However, if the test is abnormal due to an artifact which is unique to the laboratory test, then the error will be recognized only if the physician recognizes potential pitfalls associated with a particular test.3 We report a patient with Chronic Monomyelocytic leukaemia who presented with spuriously high level of potassium that lead to inappropriate intervention.

A 78 year old lady with hypertension, diabetes mellitus, mild chronic kidney disease (CKD) (glomerular filtration rate of 30 ml/min) and Chronic Myelomonocytic Leukaemia (CMML), was admitted for the management of hyperkalaemia, which was revealed on routine laboratory investigations with serum potassium of 7.3 mmol/l and serum creatinine of 2.0mg/dl. She was recently started on Losartan Potassium 50mg once daily and was neither on potassium supplement nor receiving any chemotherapy. Vitally she was stable, except for mild pedal oedema and mild splenomegaly, the physical examination was unremarkable. The other laboratory investigations were done which showed haemoglobin of 16g/dl, white blood cells; 40,600, platelets: 775,000, LDH: 81, serum uric acid: 11.6 mmol/l, serum calcium, phosphate, other electrolytes, short synacthen test for cortisol and detailed report of urine were normal with normal ECG findings. She was treated with insulin, dextrose and calcium gluconate infusion and also given Kayexalate. Her serum potassium came down to 5.1mmol/l. Losartan was supposed to be the cause of hyperkalaemia and thus stopped and she was discharged with the diagnosis of Angiotensin receptor antagonist (ARB) induced Hyperkalaemia with CKD. After a month, the routine follow up investigation showed serum potassium of 7.5mmol/l with serum creatinine of 1.5mg/dl. This time again, she was asymptomatic and was managed for hyperkalaemia in hospital. Her lab investigation showed haemoglobin of 14.8gm/dl, WBC: 39600, neutrophils: 71.8%, lymphocytes: 11.2%, monocytes: 14% and platelets: 1175000. Due to severe leucocytosis and thrombocytosis and no obvious reason for hyperkalaemia, a suspicion of spuriouis hyperkalaemia was raised. Two samples were checked for potassium simultaneously one with clotted blood and other in heparinized tube. The clotted sample showed serum potassium of 5.2mmol/l, while simultaneous heparinized samle showed serum potassium of 3.9mmol/l. This suggested that hyperkalaemia in this patient was spurious due to severe laucocytosis and thrombocytosis.
This patient fortunately, despite of being treated for spuriously high level of potassium, remained asymptomatic and went home with haematological follow up for CMML. The reason for highlighting this case is to bring physician\\\'s attention and to have a high index of suspicion for spurious hyperkalaemia in asymptomatic patients, especially in the presence of severe leukocytosis, thrombocytosis and other causes of spurious hyperkalaemia which are discussed. 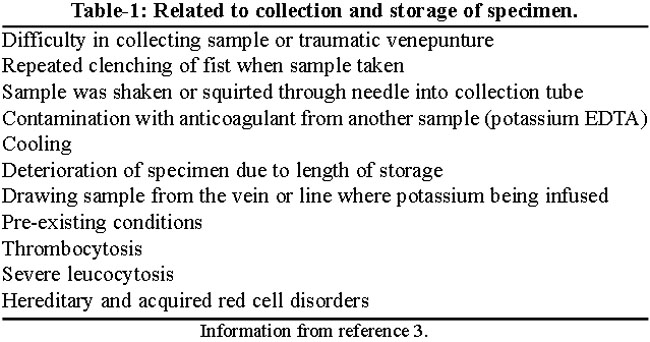 In asymptomatic patients the presence of spurious hyperkalaemia should be suspected whenever there is no apparent cause for the elevation of serum potassium concentration. Haemolysis, traumatic venipuncture, prolonged or tight tourniquet application can subsequently increase serum potassium level by its release from blood cell and skeletal muscle into blood stream. Measurement of the repeat plasma potassium concentration after proper technique, usually establishes the correct diagnosis.1 Similarly, repeated clenching and unclenching of the fist may artifactually increase the potassium concentration by as much as 1-2 mmol/l . The above conditions were excluded in our patient.
In some cases, potassium release on coagulation is exaggerated. This happens, for example, in hereditary or acquired stomatocytosis. Dehydrated hereditary stomatocytosis (DHS) is a rare dominant form of hereditary haemolytic anaemia. In some families, spurious hyperkalaemia accompanies DHS.6 This rare familial condition is characterized by a temperature-dependent loss of potassium from RBCs when stored at room temperature. In these situations an anticoagulated sample taken for analysis of plasma potassium will show a significantly higher than normal difference between the plasma and serum concentrations (typically about 0.3 mmol/l) than in the coagulated sample. Anticoagulation reduces the leakage of potassium that occurs on clotting and will produce a more physiological result. Lithium heparin is the recommended anticoagulant; plasma potassium EDTA (full blood count tube) should be avoided.5
Normally, the serum potassium concentration is typically 0.1-0.4 meq/l greater than that measured in a plasma sample in which clotting is prevented by drawing the blood into a heparinized tube. In patients with leukaemia or myeloproliferative disease this phenomenon becomes exaggerated7 where there is a marked elevation of the WBC count (>100 000/mm3) or platelet count (>1 000 000/mm3). It is estimated that for every 100 X 10 (9)/ L of platelets, an increase of 0.07 to 0.15 mmol/L of potassium is expected. Therefore in thrombocytosis, plasma rather than serum potassium should be measured. Reverse pseudohyperkalaemia has also been reported to occur in patients with haematological malignancies in whom the plasma potassium levels are greater than the serum potassium levels. The difference between serum and plasma potassium concentration (Dk) is increased in patients with erythrocytoses, thrombocytoses or both. This phenomenon is more profound in patients with a mixed type disorder, such as polycythemia vera patients, compared to those with erythrocytoses alone.8 This can be identified by checking the sample in lithium heparin.
Hyperkalaemia is most likely spurious if the patient has normal renal function and there is no predisposing factors like potassium supplement, drugs that raise potassium or combination of potassium raising drugs.9

Table-2 points out the factors which indicates true hyperkalaemina.

Hyperkalaemia, a life threatening condition, need not always be a truly raised potassium disorder. Spurious hyperkalaemia should be considered, especially when the patient is asymptomatic with no obvious reason for raised potassium levels, to avoid unnecessary treatment and hospital admission. Conditions leading to Spurious hypokalaemia including severe leucocytosis and thrombocytosis, should be known to all physicians especially those working in the emergency room.