An important cause of pulmonary oedema is Negative Pressure Pulmonary Oedema (NPPE) which characteristically develops soon after extubation from an endo-tracheal intubation. In this case report we identified a case of previously healthy man who was intubated for General Anaesthesia for extraction of impacted molar tooth. Soon after extubation he developed severe respiratory distress. Immediate diagnosis of NPPE secondary to post extubation laryngospasm was made. He was promptly treated with 100 percent oxygen via CPAP (continuous positive airway pressure) mask and within an hour he markedly improved and subsequently became asymptomatic.
NPPE is an important cause of morbidity and need for ICU admission in a healthy individual.
Keyword: General Anaesthesia, Post-extubation, Negative Pressure Pulmonary Oedema.

Pulmonary oedema is a well-known emergency in medicine which needs early detection and prompt treatment. It is typically characterized by rales, jugular vein distention, frothy pink sputum, dyspnoea, with characteristic chest radiographs findings and progressive hypoxaemia.
Pulmonary oedema most commonly occurs due to cardiac insufficiency or heart failure, however the non cardiac cause of pulmonary oedema includes Acute Respiratory Distress Syndrome (ARDS), Neurogenic pulmonary oedema, Pulmonary oedema due to fluid overload /renal failure, Drowning and Transfusion-related pulmonary oedema.1 One of the important cause of Non-Cardiogenic Pulmonary Oedema is Negative Pressure Pulmonary Oedema which characteristically develops soon after extubation from an endo-tracheal intubation and most likely results from patient\\\'s attempt to ventilate while he is obstructed usually due to laryngospasm, and thus generating a marked increase in lung negative pressure and causing a series of events followed by a fluid shift from the vascular compartment to the alveoli and bronchial tree.2
Described below is a case of a previously healthy male who developed acute pulmonary oedema shortly after extubation following general anaesthesia.

A 28 year old electronic engineer, with no past history of any significant illness was admitted in the daycare surgery for extraction of an impacted molar tooth under general anaesthesia. Patient was perfectly well before surgery, haemodynamically stable with no respiratory complaints. Anaesthesia was induced and endotracheal tube 7.5mm was inserted and patient was put on Control mode ventilation and anaesthesia was maintained by isoflurane. A total of 100 ml fluid was given during the procedure which lasted about an uneventful half an hour. Patient recovered from surgery and was extubated successfully. Within five minutes of extubation patient experienced severe respiratory distress. On examination there was frothing from the mouth with blood tinged secretion, respiratory rate was around 32/minute, heart rate 130/min and he was hypoxic with O2 saturation around 70%. Chest auscultation revealed bilateral generalized coarse crackles. Immediate diagnosis of Negative-pressure pulmonary oedema secondary to post extubation laryngospasm was made. Immediately 100% oxygen was delivered via CPAP (continuous positive airway pressure) mask and at the same time injection furosemide 40 mg IV was given. Chest X-ray at this time showed bilateral alveolar infiltrates consistent with the diagnosis of pulmonary oedema (Figure-1). 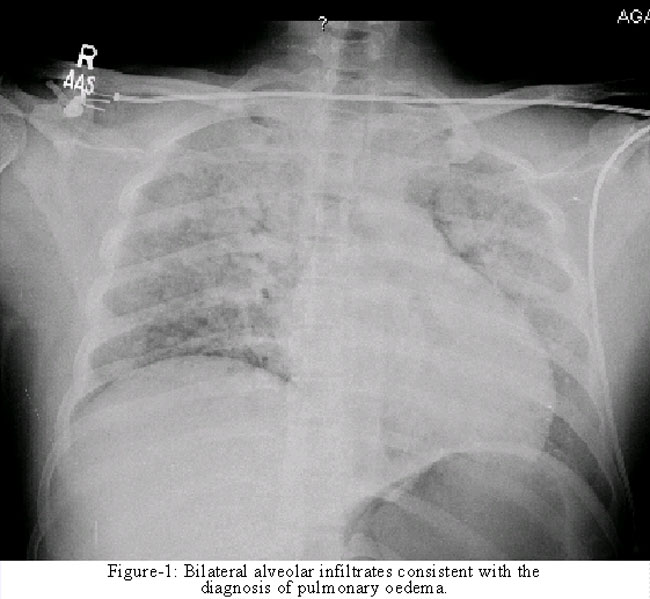 Patient gradually started improving, within half hour his breathing settled, his oxygen requirements reduced to 5 litre by face mask maintaining O2 saturations upto 98% and the crackles on his chest markedly decreased. Patient continued to improve, subsequently during the next 12 hours he was completely asymptomatic on room air, and his chest X-ray showed resolution of the infiltrates (Figure-2). 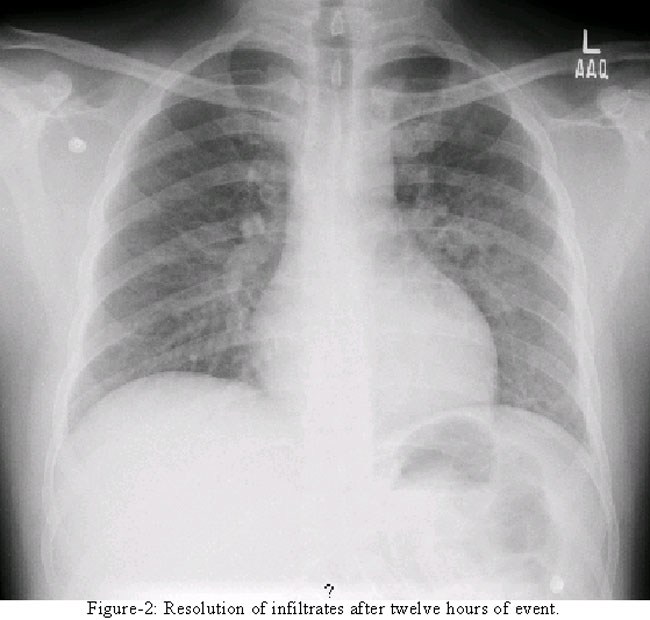 He was discharged from the hospital the next day.

Use of non invasive ventilation to avoid Re-Intubation in Myasthenia Gravis; a case report and review of literature