Objective: To assess the incidence of PONV, delay in discharge or unplanned admissions in paediatric surgical cases done at the Surgical Day Care Unit at Aga Khan University between January and July 2009.
Methods: All paediatric ASA 1-2 cases, from 6 months to 18 years of age undergoing day case surgeries at the Surgical day care unit were included in this retrospective audit. Data was collected on a designed form filled with information from preoperative, intraoperative and postoperative recovery forms. Any relevant data was also noted from nurses notes in recovery room and step down unit. Episodes of vomiting, delay in discharge, or unplanned admission due to PONV were documented. Data was analyzed on SPSS 14.
Results: Out of 163 patients only one patient (0.6%) had an episode of vomiting in the recovery room and two patients (1.2 %) had vomiting in the step down unit. There was no delay in discharge or unplanned admission due to PONV in paediatric day cases during the period of our audit.
Conclusion: The incidence of postoperative vomiting in paediatric day cases at our day care unit does not justify polymodal prophylaxis as a protocol for PONV.
Keywords: Nausea and vomiting, Postoperative, Day care (JPMA 61:273; 2011).

Post Operative Nausea and Vomiting (PONV) is a known complication of anaesthesia with reported incidence between 13-42%. PONV associated with ambulatory surgery increases health care costs due to intervention, delay in discharge or hospital admission.1-4 Anti emetic prophylaxis is considered more cost effective than treatment but incidence reported with monotherapy in young adults is 16-24%.5 PONV rate in children can be twice as high as in adults which suggest a greater need for antiemetic prophylaxis in this population.6-8 The Society of Ambulatory Anaesthesia (SAMBA) has published revised guidelines for risk prediction and risk tailored polymodal prophylaxis for PONV in adults and children at moderate to high risk, based on recent literature review.1 The drugs recommended are costly and not in routine use at our centre. Most recent research on antiemetics has focused on cost effectiveness. According to some published data on antiemetic drugs, the choice of drugs for prophylaxis has little impact on clinical outcome or patient satisfaction.9-11 It is also important to evaluate clinical data at the local health care facility prior to implementation of guidelines based on data obtained from different clinical settings, to avoid unneccassary drug exposure.11 Our day care unit caters to a sizeable population of paediatric patients. The objective of this retrospective audit was to assess the incidence of PONV in children at our Surgical day care unit and to identify delay in discharge or unplanned admissions due to this complication in a six month period between January to June 2009 in order to consider polymodal prophylaxis for PONV as a protocol, as recommended by SAMBA.

We performed a retrospective audit of all paediatric ASA 1-II cases from 6 months to 18 years of age undergoing a variety of day case surgical procedures between January and June 2009 at the Surgical Day Care Unit at Aga Khan University. Our day care unit does not accept children less than 6 months of age. All ASA III patients, those planned for admission, and non-surgical procedures such as intrathecal methotrexate injections were excluded from the audit. Data collection was done by means of a designed form which was filled by the principal investigator or co investigators. Information was obtained from preoperative and intraoperative anaesthesia forms, postoperative recovery forms, and relevant nurses\\\'notes. Any other relevant notes in the patient\\\'s file were recorded. Episodes of vomiting, postoperative recovery stay of more than two hours, or unplanned admission due to PONV was checked from these forms and documented. Data was analysed on SPSS version 14.

A total of 188 paediatric day case surgeries were performed in our Surgical day care unit between January to June 2009. A total of 163 files were retrieved from our medical records while 25 could not be accessed. The procedures included paediatric dental, ENT, eye, general and plastic surgeries as shown in Table-1. 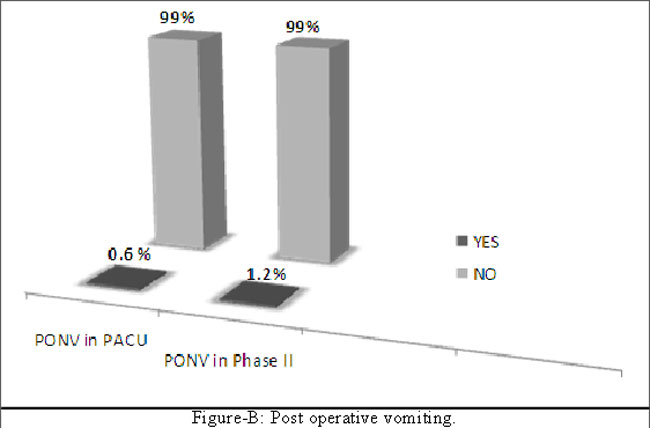 In identified high risk surgeries such as strabismus correction there was no PONV noted. There were no unplanned admissions due to PONV in this cohort of patients. Discharge home of five patients was delayed but it was not related to PONV.

Postoperative nausea and vomiting (PONV) is a common complication of surgery and anaesthesia in both adult and paediatric patients with incidence reported from 13 - 42%.1-4 It is twice as frequent in children with a rate variation in different paediatric age groups and different types of surgeries. Jamil et al reported overall frequency of PONV as 18%, 16%, and 24% in three groups of young adults undergoing tonsillectomy, randomized to receive monotherapy with metoclopramide, prochlorperazine and placebo respectively.5 Rates of more than 50% are associated with strabismus surgery, tonsillectomy/ adenoidectomy, orchidopexy, and hernia repair. Less frequent rates for postoperative vomiting (PONV) have been reported for younger children: 10% in children up to 1 year of age and approximately 20% in children 1-2 year of age. Due to difficulty in diagnosing nausea in children, vomiting and retching are the endpoints used in all research on the paediatric age group and it is more aptly referred to as postoperative vomiting or POV in most related literature.(Association of Paediatric Anaesthetists of Great Britain and Ireland guidelines 2009 on prevention of vomiting in children). Severe PONV can result in a range of complications including wound dehiscence, dehydration, electrolyte imbalance and pulmonary aspiration. It is distressing to the parents and the child and may lead to delayed discharge, unplanned admission and readmission after surgery. PONV following ambulatory surgery also results in increased health care costs both to the patient and the health care facility by reduced patient turnover, increased discharge home time, need for intervention and observation, and unplanned admission. Whereas prophylaxis is considered more cost effective and provides better parental and patient satisfaction6-8 indiscriminate prophylaxis is also probabaly unneccessary cost and drug exposure for the patient.9,10
Risk prediction and risk guided prophylaxis has been recommended by SAMBA,1 Four independent predictors of POV in children identified are duration of surgery  30 minutes, age  3 year, strabismus surgery, and a positive history of PONV in the patient, parent or sibling. The risk for PONV is 9%, 10%, 30%, 55%, and 70% when 0, 1, 2, 3, or 4 of those independent predictors are present. The SAMBA panel recommends that identified moderate to high risk children should be given a combination of antiemetic drugs of different classes of antiemetics for maximal efficacy. Ondansetron 4 mg, droperidol 1.25 mg, and dexamethasone 4 mg independently reduce PONV risk by approximately 25%. At our centre these guidelines have not yet been implemented and prophylactic multimodal antiemetic therapy is not in practice in day cases.
Implementation of a prediction rule to guide risk tailored PONV prophylaxis changes physician behaviour, resulting in an increase in preventive anti-emetic treatments. However published data are not always valid for every clinical setting and a cost-effective policy needs an evaluation effort from the local care providers. This is the only way to avoid improper use of conclusions possibly drawn in totally different medical and economical circumstances.11,12
To assess the need for implementing the new guidelines we decided to base our audit on incidence of PONV in children recovering from anaesthesia in our day case unit and delay in discharge or unplanned admissions, if any, due to this complication.
In our audit the incidence of PONV was 0.6% in the postanaesthesia care unit and 1.2% in the step down unit. There were no unplanned admissions due to PONV in children.
Anaesthetic factors implicated in causing PONV are inhalational agents, opioids, fasting and fluid deprivation.13,14 Although induction and maintenance of anaesthesia with propofol may have a role in preventing PONV(1), inhalational induction is more common in paediatric cases at our centre due to difficulty of intravenous access in awake children. We do not use propofol for maintenace of anaesthesia because of cost constraints.
Fasting is according to universal recommendations and all patients receive intravenous replacement and maintenance fluids.
Use of regional anaesthesia is associated with a lower incidence of PONV than general anaesthesia in both children and adults.1 For children undergoing infraumblical procedures we combine general anaesthesia with inhalational agents and caudal block using plain bupivacaine 0.25% for analgesia, supplemented with rectal paracetamol. Intravenous opioids in combination with rectal paracetamol or intravenous ketorolac are the most frequently used drugs for systemic analgesia in ENT, Eye, dental or plastic surgery procedures. In our audit 85.6% patients received systemic analgesia. Most children receive general anaesthesia with sevoflurane for induction and isoflurane for maintenance.
The antiemetic used is metaheborpamide. Occasionally but not always it is combined with decadron. These drugs are often but not routinely given prophylactically with opioid use in systemic analgesia.
In conclusion we did not identify any need to introduce polymodal PONV prophylaxis as a protocol for paediatric day cases.