Objectives: To assess the pattern of liver histology in chronic hepatitis C, with serum alanine transaminase levels persistently upto twice the normal range, and to identify factors associated with minimal and clinically significant histological disease categories.
Methods: This study was carried out at Ziauddin University Karachi and Pakistan Medical Research Council, Karachi, from January 2007 to July 2009. Biopsy specimens were staged and graded according to METAVIR scoring system. A fibrosis score of > F2 and activity score of > A2 was considered significant. Overall disease severity groups; minimal disease (less than F2 and A2) and significant disease (F2 or A2 and above), were compared for their association with different variables.
Results: Out of 83 patients, 32 had significant fibrosis and 15 had significant activity. Twenty three patients with significant fibrosis belonged to F2 stage. Nine had F3 fibrosis and none of our patients had cirrhosis. Overall 33 (40%) patients had significant disease. Age of the patient, alanine transaminase levels, number of the portal tracts and severity of the portal inflammation in liver biopsy were significantly associated with severity of the liver disease. Gender of the patient and steatosis in liver biopsy were not significant.
Conclusion: A substantial proportion of patients with alanine transaminase levels within twice the upper limit of normal had significant liver disease.
Keywords: Chronic Hepatitis C, Alanine transaminase levels, Liver histology, Metavir (JPMA 61:264; 2011).

Around 170-200 million individuals have chronic hepatitis C viral (HCV) infection worldwide and 3 to 4 million new infections occur each year.1 Around 75% of the patients with acute infection develop chronic disease.2 Morbidity and mortality associated with chronic hepatitis C (CHC) results mainly from the development of liver fibrosis and the subsequent occurrence of cirrhosis and hepatocellular carcinoma.3
The rate of fibrosis progression varies markedly from person to person. Thus, assessment of the stage and rapidity of progression of fibrosis are helpful in determining the prognosis and the need of therapy in the individual patient.4 Liver biopsy, the gold standard for assessment of liver fibrosis, is not always possible because of its complications, cost and poor patient compliance.5
In Pakistan prevalence of HCV infection is about 5% in the general population.6 In a developing country,7 this burden of the disease warrants a need to classify the patients into categories so as to rationalize the need for therapy. Serum alanine transaminase (ALT) levels have repeatedly been shown to correlate with the degree of fibrosis and rate of its progression along with other variables like age and gender of the patient and alcohol consumption.8,9 In Pakistan, treatment is recommended for patients having serum ALT levels above 1.5 to 2 times the upper limit of normal (ULN) for six months or more.10
The purpose of this study was to see the liver histology in patients having ALT levels within twice the ULN for the last six months and to evaluate the relationship of disease severity with different demographic and biopsy variables.

It was a cross-sectional descriptive study carried out at Ziauddin University Hospital, Clifton campus, Karachi and Pakistan Medical Research Council, Karachi, from January 2007 to July 2009. It was approved by Ethical Review Committee of Ziauddin University. The patients were selected by consecutive sampling during the study period. Eighty three PCR proven CHC patients, who had an ALT level of < 80 IU/L (2 times ULN) for the last six months, were included in the study. Patients with HBV co-infection (positive HBsAg), history of alcohol intake and blood disorders requiring frequent blood transfusions were excluded from study. A written informed consent was taken.
Blood was collected on the day of liver biopsy for the estimation of serum ALT levels. ALT was performed by UV enzymatic method using reagents from Roche (Cat. No. 10851132).
Percutaneous liver biopsies were performed with 16-18 gauge modified Menghini aspiration needles (Surecut® TSK, Japan). Biopsy specimens of more than 10mm length having at least five portal tracts were included in the study. Histological features of the liver biopsy specimens were analyzed according to METAVIR scoring system,11,12 by one histopathologist (QJ), without knowledge of the ALT levels. Every specimen was staged for fibrosis on a five-point scale as follows: F0 = no fibrosis, F1 = portal fibrosis without septa, F2 = portal fibrosis with rare septa, F3 = numerous septa without cirrhosis and F4 = cirrhosis.
F0 or F1 were regarded as minimal fibrosis and F2 to F4 as significant fibrosis. Histological activity, a measure of intensity of necroinflammatory lesions was graded on a four-point scale as follows: A0 = no histological activity, A1 = mild activity, A2 = moderate activity and A3 = Severe activity. A0 or A1 were classified as minimal activity and A2 or A3 as significant activity. Necroinflammatory lesions were graded through an algorithm based on focal lobular inflammation/necrosis, piecemeal and bridging necrosis. Portal inflammation was also recorded but was not part of grading algorithm. Primary end point for analysis was two severity groups, minimal disease (F<2 and A<2) and significant disease (F > 2 or A > 2).13
Steatosis was also divided into two broad groups; absent = grade 0 and present = any degree of steatosis. Effect of biopsy size on the assessment of liver disease was evaluated by categorizing them into two groups on the basis of number of portal tracts.14
Data entry and statistical analysis was performed using SPSS version 17.0. Results were expressed as mean ± standard deviation (SD) for quantitative variables and frequency and percentages for qualitative variables. Chi-square test was used to compare the qualitative variables. Independent t-test was used to compare the quantitative variables. A p value of less than 0.05 was considered as significant. 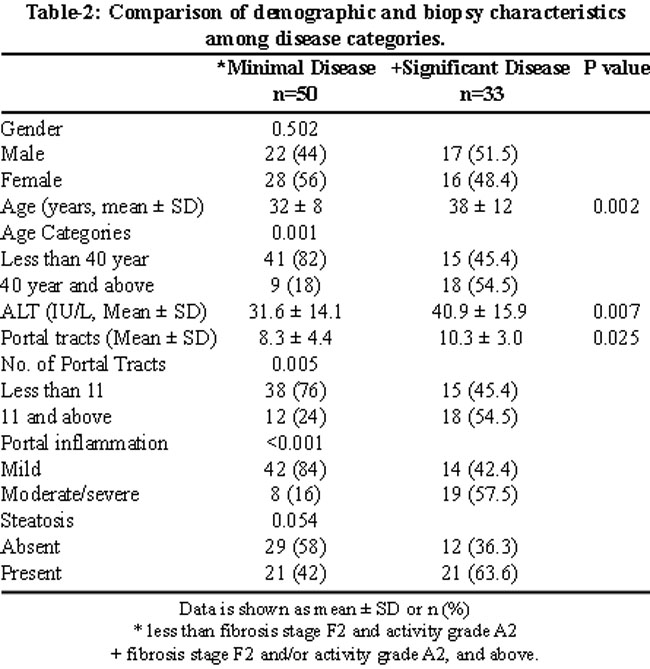 Serum ALT level is one of the earliest and most commonly used surrogate marker of liver injury.15,16 In chronic hepatitis C serum ALT levels remain persistently normal in 25 - 30% patients and these levels remain within twice the ULN in additional 40% patients. Importantly, most of these patients show lower scores for fibrosis stages and activity grades on biopsy.17 We selected patients with serum ALT level within twice the ULN because this cut off is recommended for making treatment decisions.10
Prevalence of severe disease has been found highly variable in different studies depending on study type, duration of infection and many other variables.18 Fifty (60%) of our patients showed minimal disease while 33 (40%) had significant disease. Our results showed higher proportion of the patients having significant disease than reported by Kyrlagkitsis et al,19 and Pradat et al,20 16% and 26% respectively. In both these studies patients had normal ALT; we have included patients with an ALT level of within twice ULN. On the other hand, proportion of the patients with severe disease, in our study, was slightly lower than other cross-sectional studies involving patients both with normal and raised ALT.13,21
Although liver biopsy is considered as the gold standard for estimation of liver disease, it is associated with sampling errors and interobserver variations.22 Fibrosis stage F2 (portal fibrosis with rare septa) is important in making treatment decisions but seems very subjective. We, in our study, considered any fibrous septum beyond portal tracts as significant. This element of subjectivity can be reduced by relating number of fibrous septa to portal tracts. Severity of the disease was also associated with the number of portal tracts in biopsy. Proportion of the patients with significant disease was significantly higher in the group having eleven or more portal tracts, a number that would eliminate more than half of liver biopsies in clinical practice. This difference is in conformity with the previous studies showing the effect of biopsy size on severity of the disease.14,23
Liver biopsy is not always possible because of its drawbacks and poor patient compliance, risk of a significant liver disease on the other hand, makes treatment decisions difficult in an individual patient. There is an increasing enthusiasm for the development of non-invasive surrogate markers of liver fibrosis, some of which are already in clinical use.24 These non-invasive markers need to be evaluated in this group of chronic hepatitis C patients, in our population.
In conclusion, majority of our patients showed mild necroinflammatory activity and mild disease, were less than 40 years of age at presentation and only few had steatosis. Although all these characteristics are for favourable prognosis, a substantial proportion of our patients had significant fibrosis and disease. Thus an ALT level within twice the upper limit of normal cannot be considered as a reliable marker for assessment of the disease severity. Treatment decisions need to be individualized even in this group of CHC patients.

This study is part of the research project PMRC No. 4-22-6/05/RDC/ZMU, jointly supported by Ziauddin University, Karachi and Pakistan Medical Research Council, Islamabad.