Objectives: To analyze the frequency and clinicopathologic correlation of different types of Non Hodgkin\\\'s Lymphomas (NHL) according to WHO classification of lymphoid neoplasms.
Methods: Total sixty two consecutive biopsy proven cases of NHL, from October 2008 to June 2010, were selected. The inclusion criteria was, all newly diagnosed patients of NHL with appropriate clinical information regarding age, gender, anatomic location and occurrence of B symptoms. All the cases were evaluated on Haematoxylin and Eosin (H & E) and special stains. Cases were subjected to Immunohistochemistry (IHC) using extensive panel of antibodies and classified according to WHO classification of lymphoid neoplasms.
Results: Clinical data showed that 42(67%) were males and 20(33%) females. The male to female ratio was 2.6:1. The age range was 6 to 80 years. Mean age for males was 39.6 ± 17.3 years and for females 45.1 ± 17.8 years. The B cell lymphoma comprised of 85.5 % as compared to T cell lymphoma consisting of 14.5%. The extra nodal involvement was seen in 25 (40.3 %) cases, while 37 (59.3%) cases showed nodal involvement. The B symptoms were found in overall 29 (46.7 %) cases.
Conclusion: B cell NHL is more common as compared to T cell lymphoma. Diffuse large B cell lymphoma (DLBCL) was the most frequent B cell lymphoma. The major bulk of T cell lymphomas comprised of anaplastic large cell lymphoma (ALCL). Significant association was seen in the occurrence of B symptoms with extra nodal origin and male gender.
Keywords: Non Hodgkins lymphoma, Immunohistochemistry, B cell lymphoma, B symptoms (JPMA 61:260; 2011).

Lymphoma represents one of the major health problems all over the world. NHLs are slightly more common in developed countries (50.5% of cases worldwide), with rates highest in Australia and North America, intermediate in Europe (except Eastern Europe) and the Pacific islands, and relatively low throughout Asia and Eastern Europe.1 The incidence of NHL has doubled over the past two decades in the United states (US) and most other western countries.2 It is one of the most common cancers in the United States, accounting for 4% of all cancers.3
At national level, NHL is 4th most common malignancy in males accounting for 6.1%.4 According to the first population-based study of NHL in Pakistan, a gradual increase in the annual incidence was observed (Karachi Cancer Registry (KCR) for Karachi South).5 Improved lymphoma reporting and changes in lymphoma classification have also contributed to the increased incidence of disease, and it is continuing to increase rapidly.6
NHL is a broad category consisting of several distinct lymphoid neoplasms, presently classified according to universally accepted WHO classification, where many B and T cell subtypes are recognized.7 Accurate classification of these requires correlation of clinical features, morphology, immunohistochemistry and genetic testing.8
Lymphomas sometimes cause systemic symptoms, referred to as B symptoms. These include drenching night sweats, unexplained weight loss, fever and severe itching. Patients having B symptoms show a more severe condition than asymptomatic patients with the same cancer stage, tumour location or size. Onset of B symptoms at the time of diagnosis suggests that lymphoma is progressing.9
The lymphomas encompass an array of heterogeneous malignancies. Deficient local data is available, hence clinical insight is needed to identify the exact picture of NHL for further prevention, control and disease etiology, especially in terms of efficacy of treatment protocols being followed.
Hence, we conducted this study to observe the clinicopathologic variations regarding age, gender, anatomic location and occurrence of B symptoms with different subtypes of NHL.

All the consecutive biopsy proven cases of NHL (n=62), from October 2008 to June 2010, referred from different centres of the city, were selected for this cross sectional study with the approval of ethical review board of Dow University of Health Sciences (DUHS). The study was conducted at Histopathology section of Dow Diagnostic Reference and Research Laboratory (DDRRL). The inclusion criteria was, all newly diagnosed patients of NHL having sufficient tumour material in paraffin embedded tissue blocks with appropriate clinical information regarding age, gender, anatomic location and occurrence of B symptoms. The pertinent clinical information of all the patients was noted for age, gender, site of the tumour and B symptoms, which were, fever (i.e., temperature >38°C [>100.4°F]) for 3 consecutive days, weight loss exceeding 10% of body weight in 6 months, drenching night sweats and severe itching. This was confirmed with the help of medical record, which was available with the patient\\\'s request at the time of registration of biopsy samples. The cases were classified according to WHO classification.10
All the biopsied samples taken from nodal or extranodal sites were fixed in 10% neutral buffered formalin and processed for paraffin embedding, sectioning and staining by H and E and special stains.
Immunohistochemistry (IHC) was done on 4µm thick sections of representative tumour areas, of all the cases. Histological slides were deparaffinized in xylene followed by target retrieval of histological sections with target retrieval solution (Cat # S1700, Dako, Denmark) in water bath at 95ºC for 40 minutes. Background quenching in all specimens was performed by 3% H2O2 for 10 minutes. The antibodies used were Kappa, Lambda, Ki-67, CD 15, CD 20, CD 79a, CD 3, CD 5, CD 45/LCA, CD 10, CD 56, CD 30, CD 23, CD 43, CD 138, Alk-1, EMA, bcl-6, bcl-2, TdT, CD 99 and cyclin D1 from (DAKO, Denmark). The panel of primary antibody was decided on the histomorphology. Primary antibody was incubated for 1 hour in optimized dilution at room temperature. IHC detection was performed using Envision + system (Cat # K4007, Dako, Denmark), previously used by others investigator\\\'s also.11 Positive control slides were included with each batch. Slides were examined for the presence of nuclear/ cytoplasmic/ membranous staining (depending on the location of the positivity) within the tumour itself. Each case for IHC was evaluated by three histopathologists separately. A disagreement was resolved by joint review on multi-head microscope and a final consensus was established in each case. Data was subjected to statistical soft ware, SPSS version 16. Gender, types of NHL, anatomic location and occurrence of B symptoms were computed in terms of frequency. Age was subjected for mean, median, range and standard deviation. Statistical significance of B symptoms with specific phenotype, anatomic location and gender was evaluated by applying chi square test. p value < 0.05 was considered statistically significant. 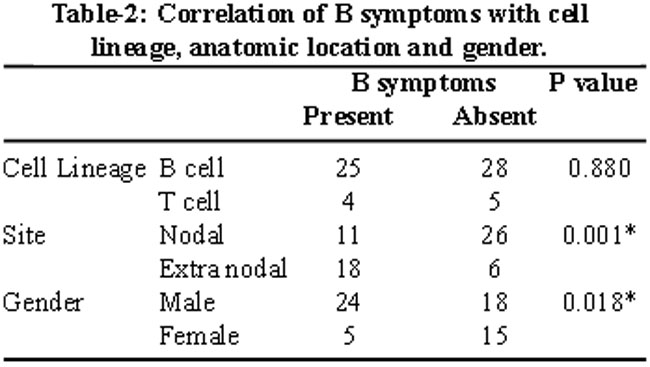 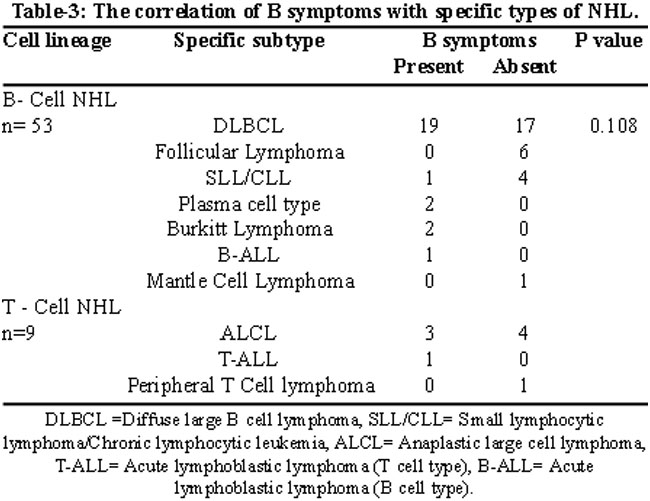 Our study updates the recent insight of NHL with the advanced techniques, as previously described by centres of repute.12,13
In the present study we investigated the clinicopathologic information of NHL to explore this challenging group of malignancies in relation to existing information. We found predominance of male gender in our series, in contrast to reported majority of females, (M:F :: 55:59) in some parts of the world.14 Still, there is need to generate more data regarding variation in gender predominance in our population for better understanding.
In our setup early presentation of NHL was seen with the mean age of 41.3 ± 17.5 years as compared to late presentation of 53.1 ± 16.5 years reported by Kilickap et al.15 Moreover T cell lymphoma specifically is also seen in younger age 28.4 ± 15.9 years in dissimilarity at national level with other studies.13
Compared to western world, where low frequency of T cell lymphoma is noted. In US, mature T/NK-cell neoplasms and lymphoblastic leukaemia/lymphoma accounted for 5%,16 whereas in our setup T cell lymphoma is 14.5%, in accordance with higher frequency of T cell NHL, also described previously at national level.13 Although, higher frequency of T cell lymphoma is different from other parts of the world but it is well established in literature that Asians have higher rates of aggressive NHL, T-cell lymphomas, and extra nodal disease.17 Similar to other studies12,16 the most common B cell subtype is DLBCL and amongst T cell lymphoma, it is ALCL.12
In year 2000 the incidence of extra nodal primary lymphomas, represented 27% of all incident lymphomas in the US. Stomach and skin were the most common sites.18 Variation was seen from study to study, with 34% of cases as primary extra nodal NHL19 and 37% of NHL as extra nodal in origin with GIT (30%) as the most common site20 in western literature. The ratio between nodal and extra nodal involvement has a wide range of dissimilarity in our set of series as compared to western figures20 however, it is in concordance with national studies as seen by Mushtaq at al,21 representing 62% and 38% of cases with nodal and extranodal involvement respectively. GIT was declared the most common extranodal site. Our data is more in accordance with national studies depicting extra nodal involvement of 40.3 % with head and neck region as the most common site followed by GIT. Though, it could be a referral bias because of the more active ENT department in collaboration with our laboratory. Therefore, this is also a question for future clinical based studies regarding NHL in our setup, because still dearth of literature exists at national level in this respect.
It is observed that localized disease is a good prognostic indicator for event free survival (EFS) and overall survival (OS).22 B symptoms are also associated with increased risk of failure of different treatment modalities.23 Little information is generated in relation to advanced disease, B symptoms and aggressive lymphomas in our population like other developing countries. In this regard our data shows 46.7 % of patients have B symptoms as previously seen by Hingorjo et al24 with the frequency of 37.1%, but additionally we found significant association of B symptoms with extra nodal involvement (p = 0.001) and male gender (p = 0.018).
The clinicomorphologic information in our set of series shows variation, when compared with western literature,20,25 which advocates that still there is a need to generate long term followup studies to further predict the survival and outcome in our population with the help of clinical and histomorphological parameters at the time of diagnosis, as strong supportive evidence.

NHL is seen in slightly younger age, in our population. B cell NHL is more common as compared to T cell lymphoma. The most common subtype of B cell NHL is DLBCL, whereas ALCL is the frequent subtype of T cell NHL. Significant association of B symptoms with extra nodal origin and male gender supports that, male gender and extranodal origin show aggressive behaviour of disease.

The authors are thankful to the laboratory staff of Histopathology section of DDRRL for participating in good histopathology processing. We also appreciate Miss Humera and Mr. Adeel for their contribution in Immunohistochemistry. We are especially thankful to Prof. Nazeer for his advice and cooperation in the statistical calculations of the manuscript.