Prevalence of Antenatal Depression: Comparison between Pakistani and Canadian women

Objective: To study the prevalence and correlates of depression in pregnant women of different cultures.
Methods: We used a score of 13 or greater on the Edinburgh Postnatal Depression Scale (EPDS) to indicate depression status and logistic regression to determine its correlates in pregnant women from Northern Pakistan (n=128), Caucasian (n=128) and Aboriginal (n=128) women from Saskatchewan, Canada.
Results: A higher proportion of Pakistani women (48.4%) had depression compared to their Aboriginal (31.2%) and Caucasian (8.6%) counterparts. Depression was associated with poor physical health in all women; however, there were unique correlates of antenatal depression in each group: physical abuse in Pakistani women (AOR=4.40:95% CI, 1.15-16.85), sexual abuse in Aboriginal women (AOR=3.02:95% CI, 1.09-8.40), and low income in Caucasian women (AOR=5.74:95% CI, 1.04-31.78).
Conclusion: Depression is a substantial public health problem among pregnant women, with women in Pakistan having a much higher burden of antenatal depression than their Canadian counterparts.
Keywords: Antenatal depression (JPMA 61:242; 2011).

Depression is a major contributor to disease burden worldwide1 with females twice as likely to have experienced a major depressive episode as males.2Maternal depression has implications for child health and it can adversely affect intellectual competence, growth, and well-being.3,4 The specific causes of depression remain unclear and a variety of factors such as hormonal changes, victims of abuse and oppression, and powerlessness have been postulated to play a role in the development of depression in women.5,6 In Pakistan, studies have indicated a high prevalence of depression in women, but there is a dearth of evidence about prevalence of depression during pregnancy, especially among women in the remote rural villages.
This study was conducted as part of University of Saskatchewan funded research grant "Pakistan and Canadian Teamwork (PACT) for chronic disease prevention in Pakistan. A random sample of 1000 households was visited in a rural district of Northern Areas of Pakistan to determine prevalence of hypertension, obesity, tobacco use, and mental stress. Mental stress among pregnant women was determined using the Edinburgh Postnatal Depression Scale. This scale was used to determine the prevalence of depression among women with Caucasian and Aboriginal ethnicity in Saskatchewan during the study period. We took advantage of the availability of unique data sets to highlight cross-cultural disparity in prevalence of depression during pregnancy.

Participants: The Pakistani women were recruited as part of the "Pakistan and Canadian Teamwork" (PACT) study of chronic disease prevention. A total of 1,000 households were selected by stratified random sampling from a list of households in the Ghizar district of Gilgit Baltistan province in Pakistan, an area that is made inaccessible by many of the world\\\'s highest mountains, including the Himalayas. The inaccessibility of the area has been a strong impediment to development and health care. One hundred and twenty-eight of the women in the sample were pregnant at the time of the survey.
The Canadian women were all participants in the "Feeling in Pregnancy and Motherhood Study" (FIP). FIP is a longitudinal study of antenatal and postnatal depression of 1,050 women in Saskatoon, Saskatchewan, Canada.7 Saskatoon is a city with a population of 210,000, 5.37% of whom are Aboriginal.8 Using a computer algorithm, we randomly chose 128 of 648 Caucasian FIP participants who were recruited from the general population of women of Saskatoon Health Region, and 128 of 256 inner-city Aboriginal women to compare with the women from Pakistan.
Depression Measure: We used the Edinburgh Postnatal Depression Scale (EPDS) to determine depression status.9 This instrument has been validated for use in pregnancy,10 in Urdu,11 the language of the region in Pakistan, and in Canadian Aboriginal women.12 Response categories are scored 0, 1, 2, and 3 according to increased severity of the symptoms. The total score is calculated by adding together the scores for each of the ten items. Depressive status was assigned to women who scored greater than or equal to a score of 13 on the EPDS.
Independent Measures: We collected data on physical, emotional and sexual violence and on socio-demographic variables using a questionnaire. All data were collected by female health visitors or community nurses who were trained to administer the questionnaire during home visits.
Both projects were approved by the Behavioural Ethics Board at the University of Saskatchewan and the FIP study was also approved by the Saskatoon Health Region, Saskatoon, Saskatchewan, Canada. Informed consent was signed by each study participant.
Data Analysis:
Descriptive, bivariate, and multivariate analyses were performed using SPSS software. For logistic regression analyses, presence of depression (> 13 scores on EPDS) formed the dependent variable. Variables used were available on all three groups of women; specifically age of mother, education level, parity, marital status, gestation in weeks, employment status, annual household income, perception of health, history of lost pregnancy, and experience of physical, emotional and sexual abuse. Perception of health status was converted from a five point Likert scale into a dichotomous scale i.e. poor/fair/good versus very good/excellent. Bivariate analysis was carried out to evaluate each variable for its unadjusted association with depression. For Canadian women, low income was defined as having an annual income of <$20,000 or on social assistance. Household income tertiles (three equal size groups) were determined for Pakistani population, with households in the lowest one-third (1st tertile) of income distribution were treated as having low income for this analysis. Independent variables with a p-value <0.25 in the bivariate analysis were selected for inclusion in the multivariable logistic regression. 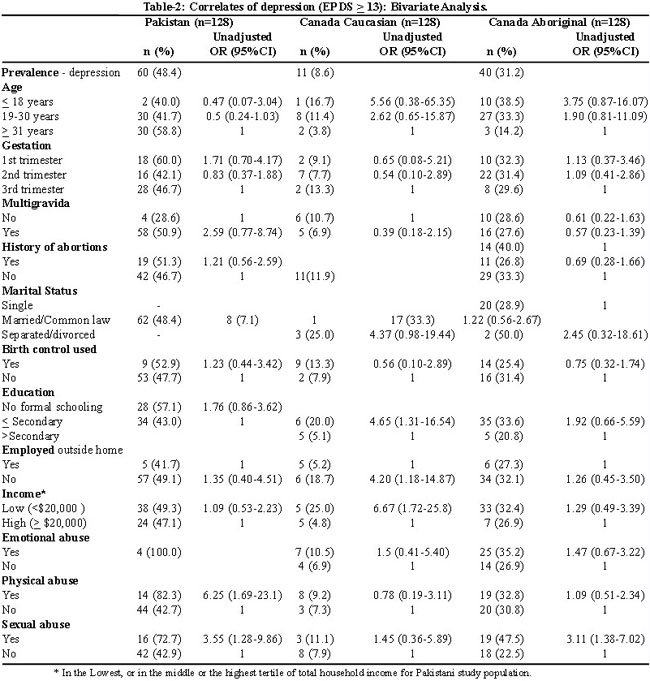 Table-3 shows independent correlates of depression. Pregnant women who had depression were more likely to report poor health among the Aboriginal (adjusted odds ratio (AOR) of 4.04: 95% CI, 1.44-11.35), Caucasian (AOR= 21.65: 95%CI, 2.37-197.32), and Pakistani women (AOR=2.08: 95%CI, 0.91-4.78) than the women who did not experience depression. Perception of having poor physical health emerged to be a strong and significant predictor of depression in each of the ethnic groups. Pakistani women with depression were more likely to be physically abused (AOR=4.40:95% CI, 1.15-16.85), while the Aboriginal women were more likely to be sexually abused (AOR=3.02:95%CI, 1.09-8.40). Depression in the Caucasian women was associated with low annual income (CA<$20,000 or social assistance) (AOR=5.74:95%CI, 1.04-31.78).
Self-harm thoughts are not often associated with pregnancy; however, item 10 on the EPDS which addresses self-harm was examined. Sixty percent of the Pakistani women with depression had had thoughts of self-harm in the past 7 days, with almost 17% of them thinking of harming themselves \\\'often\\\' during this time. This is in sharp contrast to the Caucasian women, where only 24% of those who were depressed reported self-harm thoughts at all and none of them had thought of self-harm often, and almost twice as much as the Aboriginal women with depression who had thought of self-harm 32% of the time in the last 7 days.

Almost half of the pregnant women in the rural mountain area in Pakistan reported depression compared to 36% of women from southern villages of Pakistan (12 weeks postpartum)13 however, they used a lower cut off on the EPDS (12 rather than 13 or more) to define depression than we did. Mumford et al. found a high prevalence (46%) of anxiety and depression among women in neighbouring Chitral, Pakistan, using Bradford Somatic Inventory.14 A population based study conducted in a sample of non-pregnant and non-lactating women aged 18 to 49 years in the same study villages in Pakistan found that 32.4% women had anxiety and depression, using the Aga Khan University Anxiety and Depression Scale.15
The high prevalence of depression during pregnancy in Pakistani women is a matter of public-health concern. Maternal depressive symptoms contribute to unfavorable patterns of health care seeking for women and their children.16 Depression during pregnancy has been associated with low birth weight and poorer health outcomes in children.17,18 In Pakistan, social norms, as well as cultural practices and relationship with in-laws may play a key role in women\\\'s mental health. In our study population, a high proportion of the Pakistani women were illiterate. Low education has been found to be a strong risk factor for depression.19 Physical abuse was a significant correlate of depression in Pakistani women. This finding is consistent with other studies that have shown high prevalence of depression among pregnant women exposed to physical violence.20,21
The prevalence of depression in the Canadian women is lower than the Pakistani women; however, we noted a significant disparity in the prevalence of depression across ethnicity. The Aboriginal women had high rates of depression, which is in keeping with other data that has been reported.21,22 The rate for Caucasian women is consistent with Statistics Canada data which found 9% of pregnant women had depression. In this study, depression was negatively correlated with household income. Other studies also noted increased rates of depression are associated with relative financial difficulties.23
Suicide is rare during pregnancy24 but as this study confirms, self-harm thoughts are not uncommon in pregnant women, especially those women with high levels of depression, Aboriginal, and Pakistani women. Some have questioned the single-item question on the EPDS as a screen for self-harm; but, compared to the Beck Depression Inventory, and the Hamilton Rating Scale for Depression, the EPDS was the most sensitive for identifying suicidal thoughts in pregnant women.25
In this study we compared populations with social, cultural, and language differences however this study highlights disparity within- and between countries. Studies comparing mental health conditions in developing countries with developed countries having modest resources can produce research data of excellent quality, notwithstanding variations in the genetic make-up of populations and differences in the cultural and social environment.26
Limitations:
This analysis compares the findings of two separate studies. We were able to add the EPDS to the PACT study before it began, but we were not able to include all of the variables studied in the FIP study. This would have given us a more complete view of the final model of associations with depression.

We have found extreme divergence in the amounts of depression and self-harm thoughts between three different groups of pregnant women. Given the high rates of depression in the Pakistani and Aboriginal women and the associated potential risks to mother and child, screening for depression needs to be an essential component of prenatal care, particularly in socially disadvantaged women. We found that women who perceive their overall health as poor were significantly more likely to have depression. This implies that simply asking a woman how she is feeling can be a quick, informal screen in the clinical setting that can lead to a more formal investigation and potential treatment of depression irrespective of country of residence or ethnicity.

Gratitude is extended to the women and staff: Healthy Mother Healthy Baby Program, Saskatoon Health Region and the Westside Clinic, Saskatoon Community Clinic, Saskatoon, Canada and also to the women, interviewers and Aga Khan Health Service staff in Northern Areas of Pakistan for their help in, of PACT project.
Funding:
The study was supported by the Canadian Institutes of Health Research (CIHR, Grant 145179 Nazeem Muhajarine and Angela Bowen, Co-Principal Investigators), the Community-University Institutes of Social Research (CUISR), and the CIHR-funded Community and Population Health Research (CPHR) Strategic Training Program within the Saskatchewan Population Health and Evaluation Research Unit (SPHERU) at the University of Saskatchewan. Funding support for the PACT was provided through the Seed Grant by the Dean, College of Medicine, University of Saskatchewan, Canada.