Objective: To review retrospectively, the resultsof Whipple\\\'s procedure from 1986 to December 2009 at the Aga Khan University Hospital.
Methods: Patient\\\'s case notes were reviewed to extract information related to demographics, clinical and laboratory data, operative procedure and post operative period. Surgical mortality was defined as death within 30 days of procedure.
Results: Hundred and twenty one patients underwent a successful pancreaticoduodenectomy during this period. There were 78 males and 43 females. Most presented with clinical features of obstructive jaundice. Perioperative evaluation in the majority included an abdominal ultrasound and contrast enhanced CT scan. A preoperative ERCP was performed in 64 (53%) patients and a stent was placed in 32 (26%). Stent related sepsis was noted in 8 patients (25 %). Eighty four (69%) patients underwent a standard resection, 31% had a pylorus preserving procedure. The commonest pathology was adeno-carcinoma located in the pancreatic head or periampullary area. Post operative morbidity was noted in 54% of patients, the commonest being chest infection (20%) followed by delayed gastric emptying and pancreatic anastomotic leak. There were 12 perioperative deaths giving a surgical mortality of 10%.
Conclusion: To our understanding this is the largest series of consecutive pancreaticoduodenectomies reported in Pakistan. Our morbidity and mortality rates compare favourably with international centers of similar yearly case volume. There is a need to establish regional centers to effectively manage complex disease conditions and improve the standard of care offered to our patients.
Keywords: Pancreaticoduodenectomy, Whipple’s procedure, adenocarcinoma pancreatic head (JPMA 61:232; 2011).

Pancreaticoduodenectomy (PD) is one of the most complex surgical procedures. Historically it was Walter Kausch, who in 1909 performed the first successful PD as a staged procedure. However the regional operative procedure for periampullary tumours was popularized by Allen Oldfather Whipple in a paper published in 1935,1 the procedure now is widely known as "Whipple procedure". Following Whipple\\\'s report, the operation became widely known but was infrequently performed because of high operative mortality rates. By the end of Whipple\\\'s career, he had performed 37 such procedures. Operative mortality from the original report of Whipple to well into the 1970s was in excess of 25%.2-4 It was only in 1990s that several major centers in western countries started reporting significantly reduced perioperative mortality rates of below 5%, these were attributable to a combination of improvements in surgical, anaesthetic/critical care and radiology techniques; both diagnostic and interventional.5-11 In recent years some studies12-14 have reported large numbers of consecutive Whipple procedures without mortality. Carcinoma of the head of pancreas is the most common indication for pancreaticoduodenectomy.10,15 With its improved safety profile PD is now also considered an appropriate treatment option for selected patients with chronic pancreatitis; this now constituting the second most common indication for the operation.10,15 Despite dramatic reduction in mortality rates the postoperative morbidity continues to remain high ranging from 40-50%.16,17
We have reviewed our experience with this procedure at a single institution over a 24 year period.

This is a retrospective case note review of all patients having undergone an elective PD, at the department of surgery between January 1986 and December 2009. The records were obtained through the hospitals health information and management system. A multivariable form was used to record information. Earlier data bases for the procedure, maintained in the department were also used to track missing information. Demographics, co-morbidities, history of presenting illness, past history, laboratory and radiological investigation, intra-operative data including operating time, estimated blood loss and number of packed cells transfused during surgery was recorded. Postoperative complications and mortality were also documented. Operative mortality was defined as death within 30 days of surgery.

A total of 121 patients underwent PD during the study period at AKUH. Patients included 78 men and 43 women (Table-1), 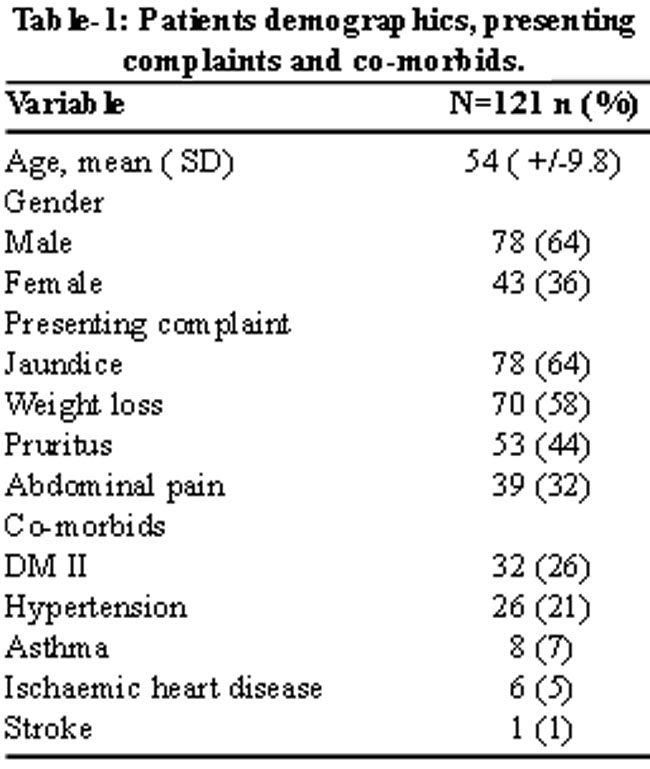 with a mean age of 54 ± 9.8 years. The trend line for annual PD with the number of cases is shown in the Figure. 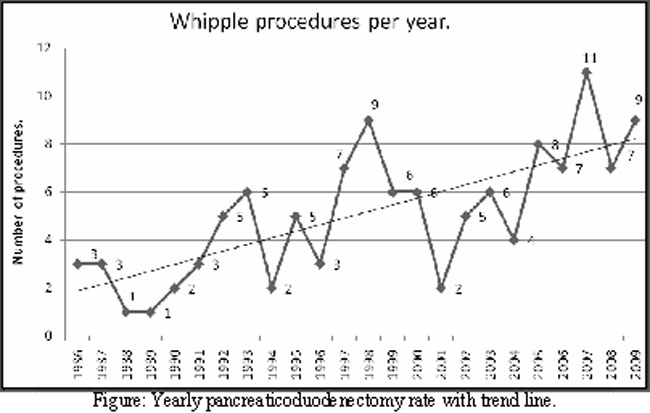 The most common of all preoperative signs and symptoms, was jaundice (n=78; 64%), followed by weight loss (n=70; 58%), pruritus (n=53; 44%) and abdominal pain (n=39; 32%). Fifty (41%) patients had one or more chronic comorbid illnesses, which included diabetes mellitus (n=32), hypertension (n=26), asthma (n=8), cardiovascular disease (n=6) and CVA (n=1).
Serum biochemistry demonstrated a raised total Bilirubin in 76 (63%) patients. Prothrombin time derangements were noted in 28 (23%) patients. A reduced serum albumin level was observed in 57 patients (47%).
The majority of patients 71% underwent a preoperative abdominal CT scan for staging and assessing resectability. A preoperative ERCP was performed in 64 (52%) patients and a stent was placed in 32 (26%). Stent related sepsis was noted in 8 (25%) patients.
Magnetic resonance imaging/magnetic resonance cholangiopancreatography (MRI/MRCP) were used only infrequently in 4% cases. Conventional ultrasonography (US) scan was used in 72 (60%) patients.
Adenocarcinoma of the head, periampullary or ampullary area was the commonest tumour type accounting for 83 cases. Other tumour types seen are listed in Table-2. 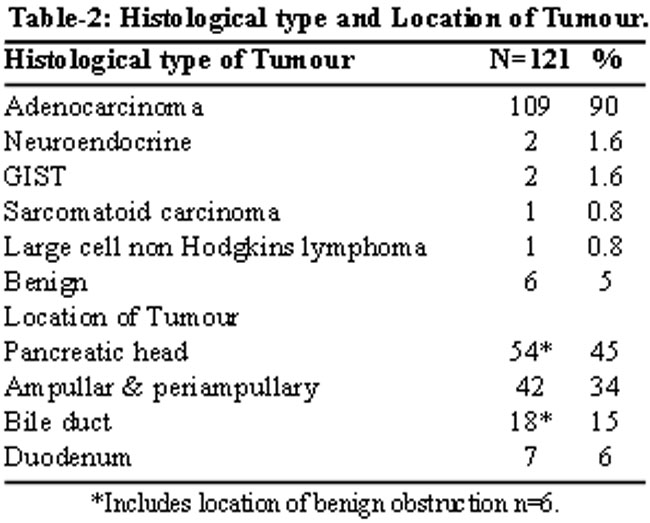 Pancreaticoduodenectomy continues to be one of the most complex operations and a formidable undertaking for both; surgeon and patient. The dramatic reduction in peri-operative mortality in the past 2 decades is well described in the literature but most of the reported series come from high volume referral centers. Recommendations from the same suggest that this procedure should only be undertaken in hospitals with well developed multidisciplinary and critical care facilities.7-11 From the literature one also gets an impression that the reduction in peri-operative mortality is a complex mixture of improvements in surgical techniques, multidisciplinary care and interventional radiology. The fact that peri-operative morbidities continue to be high also indirectly supports this assumption. The most obvious example of this is the dreaded complication of pancreatic anastomotic leakage, with its potential of proteolytic enzyme activation, setting off a series of events that lead to death. With high definition CT scanning and newer interventional radiology techniques this serious and previously often fatal complication can now often be managed conservatively. Another uncommon but potentially lethal complication is post-operative haemorrhage; gastro-intestinal or intra-peritoneal. This can now be successfully managed by angio-embolization or endoscopy. Three patients in our series needed angio-embolic control for life threatening haemorrhage from stump of gastro-duodenal artery.
The preferred approach to a number of important perioperative issues has been established over the past decade and half. Tumour resectability can be well assessed by present generation high definition (spiral/64slice) contrast enhanced CT scans and in the vast majority of cases further tests are not routinely needed. Endo-luminal US may have a complementary role, but is not well established. There is now significant evidence that surgical intervention can safely be undertaken in patients with obstructive jaundice and; biliary decompression is only needed in patients with very high bilirubin levels or in those with evidence of biliary sepsis.18-20
The approach to evaluation of suspected neoplastic obstructive jaundice now dictates a pancreatic protocol contrast enhanced CT scan as the 1st investigation following ultrasound and biochemistry. An ERCP should only be attempted if no lesion can be identified on CT; surgery is not being considered or palliation is to be offered. Suspected neoplastic obstructive jaundice continues to be one of the few conditions where major surgical interventions can be attempted in the absence of histological confirmation of suspected diagnosis.
A major as yet unresolved challenge in relation to this procedure is the nature of the illness, for which it is most often, employed i.e. adenocarcinoma of the pancreatic head. This continues to be a lethal illness with a dismal overall 5 year survival. At presentation up to 80% of patients are only eligible for palliation. Successful resection in cases of pancreatic adenocarcinoma does not guarantee prolonged survival but does improve the chances;21 at present complete resection followed by adjuvant treatment with chemotherapy or combination chemo-radiotherapy is widely considered the best available option, though there are differing opinions about the benefits of adjuvant treatment.22,23 The outlook is somewhat better for other malignancies that may arise in this same anatomical area like distal bile duct, duodenal or ampullary cancers.
A nihilistic approach to malignant obstructive jaundice continues to prevail in Pakistan. The main reasons for this are; a poorly developed primary healthcare system with its negative impact on referral patterns, and secondly the scarcity of well developed, tertiary care, multidisciplinary centers.
Other authors from Pakistan24,25 have published their experience with this procedure; the numbers involved have been small. Incidence of morbidities and mortality in these series has been similar to our experience, though in both series the time duration under review has not been specified. We describe what we believe is the largest series of pancreatoduodenectomies in Pakistan with a critical look at peri-operative events. Yearly case volume at our center has slowly but steadily grown over the years and we are now in the category of a moderate volume center. Our peri-operative morbidity and mortality rates are comparable to international centers of similar case volume.7-9
We identify the need and strongly recommend that efforts be made to develop regional referral centers to optimize the care of complex diseases like neoplasia related obstructive jaundice.