Objective: To determine the relative frequencies of different renal tumours in adults and to analyze the histopathologic characteristics of renal cell carcinoma and its variants in the population studied.
Methods: The study was carried out at Histopathology Department, Sindh Institute of Urology and Transplantation (SIUT) from April 2004 to October 2004. All consecutive adult patients with renal tumours managed surgically with tumour nephrectomies, were included. Nephrectomy specimens were fixed in 10% formalin. Gross and microscopic examination of the specimens was done according to standard protocol. Patients\\\' demographic and clinical data were obtained from clinical charts and the histopathological features of tumours were retrieved from biopsy reports.
Results: Among 50 patients, 33 (66%) were males and 17 (34%) females. Mean age was 47.9±15.1 years (range; 17 - 80 years). Most tumours were malignant: 47 (94%) vs. 3 (6%) benign. Among malignant tumours, renal cell carcinoma (RCC) was commonest; 41 (87.2%). Various subtypes of RCC included: conventional/clear cell RCC, 30 (73.2%); papillary RCC, 6 (14.6%); chromophobe RCC, 1 (2.4%) and sarcomatoid RCC, 4 (9.7%). Other malignant tumours were: rhabdomyosarcoma, 2 (4.2%); primitive neuroectodermal tumour, 1 (2.1%); transitional cell carcinoma, 2 (4.2%); and squamous cell carcinoma, 1 (2.1%). Benign renal tumours included one case each of angiomyolipoma, oncocytoma and metanephric adenoma.
Conclusion: The spectrum of adult renal tumours in this study consistent with that of previously reported literature. RCC is the commonest malignant tumor and conventional/clear cell RCC is the most common subtype. However, RCC presentation is delayed with a large size and an advanced stage of the disease, compared to published literature.
Keywords: Adults, renal tumours, histological spectrum, renal cell carcinoma (JPMA 61:224; 2011).

Renal tumours comprise a diverse spectrum of neoplastic lesions with patterns that are relatively distinct for children and adults.1-4 A wide variety of both benign and malignant tumours arise from different components of the renal parenchyma, notably tubular epithelium.1-4 Accurate diagnosis of most renal tumours is not possible before surgery and histopathologic evaluation. Moreover, currently the gold standard in the treatment of renal tumours is radical or partial nephrectomy.5 A detailed and meticulous histopathologic examination of tumour nephrectomy specimens is essential to establish histologic type and to record accepted histopathological prognostic determinants i.e. tumour size, histologic subtype, nuclear grade, and stage in cases of malignant renal neoplasms.5-7
There is little published data on the spectrum of renal tumours in adults in Pakistan and more specifically, the detailed histopathologic characteristics of renal cell carcinoma (RCC), which is by far the most common malignant epithelial tumour of kidney.8,9 We undertook this study to determine the relative frequencies of different types of renal tumours, their histopathological characteristics, classification and to compare our findings with those in previously published literature.

The study was conducted at the Histopathology Department, Sindh Institute of Urology and Transplantation (SIUT) from April 2004 to October 2004. Fifty tumour nephrectomy specimens from 50 adult patients were included in the study. Inclusion criteria were; nephrectomies either total, radical or partial, done for tumours, both benign and malignant of adult patients > 17 yrs of age. Nephrectomies performed for non neoplastic conditions, paediatric tumour nephrectomies and needle biopsies carried out for tumours were excluded. Patients\\\' demographic and clinical data were recorded from clinical charts and the histopathologic data including the gross and microscopic findings were obtained from pathology reports. The slides were reviewed by two experienced pathologists (MM, JIK) blinded to the original reports first independently and then jointly to arrive at a consensus on all pathological features including nuclear grade.
At the time of primary reporting, nephrectomy specimens were received fixed in 10% buffered formalin. Gross handling of nephrectomy specimens was done according to the standard protocol for examining nephrectomy specimens.6-9 Representative tissue blocks were taken and processed for paraffin embedding, haematoxylin and eosin (H and E) stained and examined by the pathologists. Special stains and immunohistochemistry (IHC) was done where necessary. WHO classification of renal neoplasms was employed for the diagnostic categorization of the tumours.4 Revised Tumour, Node, Metastases (TNM) classification (1997) was used for staging and Fuhrman nuclear grading system was employed for grading the malignant neoplasms.10,11 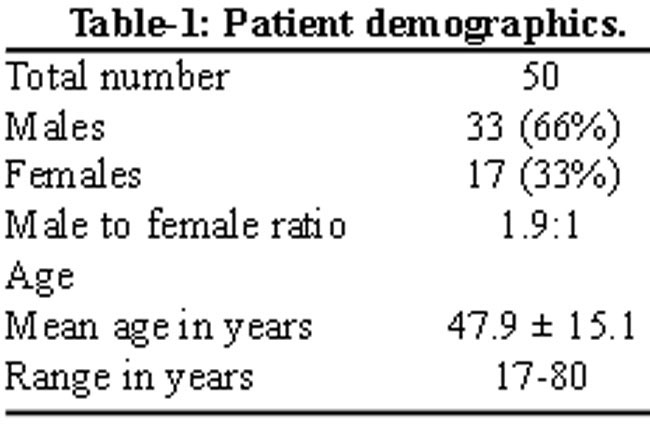 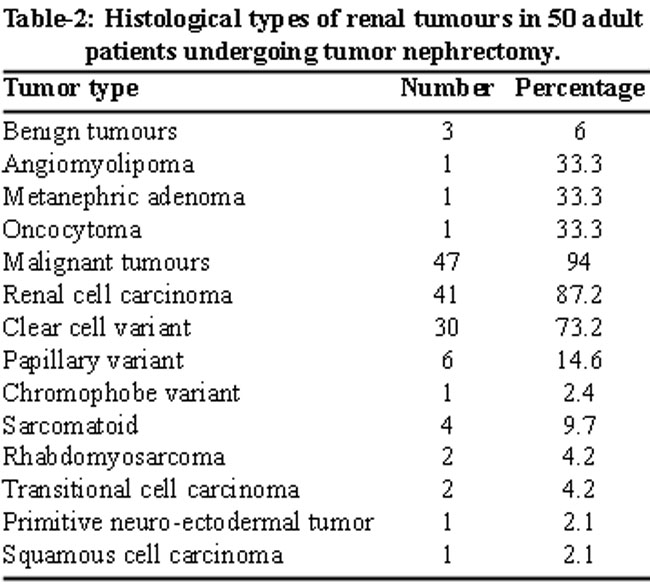 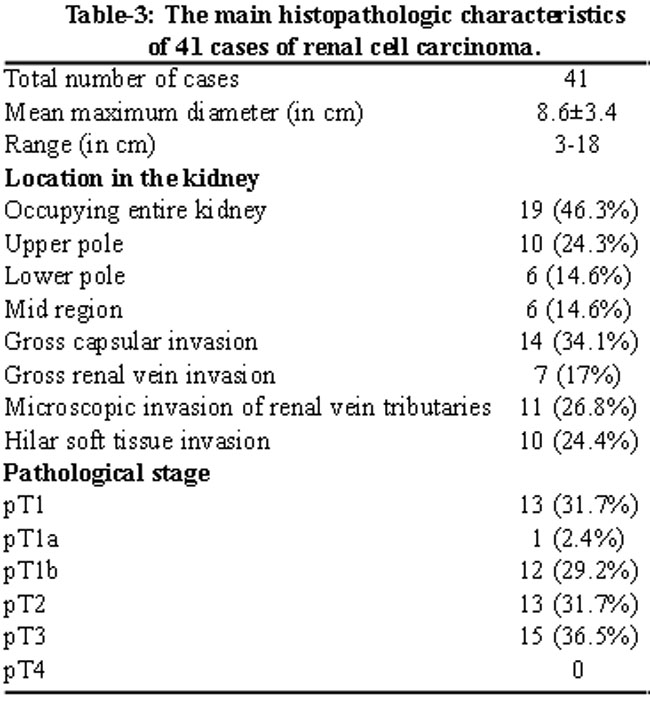 which shows that the mean maximum diameter of the primary tumour was 8.6±3.4 cm. The maximum diameter of primary tumour was 18 cm, as seen in 3 cases (7.3%) and the minimum, 3 cm, seen in 1 case (2.4%). In 19 (46.3%) cases, the tumour occupied more or less the entire kidney. In 10 (24.3%), it occupied the upper pole, in 6 (14.6%), the lower pole, and in 6 cases (14.6%), the mid region. Grossly, 90% of the tumours were variegated with areas of haemorrhage and necrosis. Gross capsular invasion with involvement of perinephric fat was observed in 14 cases (34.1%). Renal vein invasion was found on gross examination in 7 (17%) cases, while microscopic vascular invasion in small hilar vessels was seen in 11 cases (26.8%). Hilar soft tissue invasion was observed microscopically in 10 (24.4%) of the cases. Adrenal gland was involved in one case only. No tumour involvement was seen grossly or microscopically in adrenal gland. Lymph nodes were received in 5 (12.2%) cases. Lymph node metastases were present in 3 cases, remaining 2 nodes showed reactive changes. Fuhrman\\\'s nuclear grading system was applied to 30 cases of CCRCC and 6 cases of PRCC only and not to CRCC and sarcomatoid renal carcinoma. Among 30 cases of CCRCC, two cases (6.6%)) showed grade 1, 19 (63.3%) grade 2, six (20%) grade 3 and three (10%) grade 4. It is evident that majority of CCRCC exhibited nuclear grade 2, while grade 1 was rare. Higher nuclear grades (3 and 4) were seen in approximately one third of cases. Among PRCC, 5 cases (83.3%) exhibited low grade (1 and 2) nuclear features and one case (16.6%) showed high grade (grade 3). Immunohistochemical staining was performed in seven malignant tumours. Among these, all four cases of sarcomatoid carcinoma showed cytokeratin and vimentin positivity, two cases of rhabdomyosarcoma showed desmin and myogenin positivity, and one case of PNET showed diffuse positivity of CD99 and neuron-specific enolase (NSE).

In conclusion, majority of renal tumours in adults in our setting are malignant. Benign neoplasms are rare. Conventional/clear cell RCC is the most frequent histologic type; however, papillary RCC and chromophobe RCC also occur at a frequency compared to that already reported. Most malignant tumours of kidney in our population are of large size and present at advanced stage and higher nuclear grade.