Objective: To asses the frequency of ectopic pregnancy and to evaluate the relevance of the risk factors in a Medical Center, Kingdom of Saudi Arabia (KSA).
Methods: This retrospective study was done in Royal Commission Medical Centre, Yanbu Industrial City, KSA over a period of four years, where the medical records of patients with the diagnosis of ectopic pregnancy were reviewed. Data was collected on initial presentation, chief medical complaints, sociodemographic characteristics, past obstetrics and gynaecological history, history of previous surgeries (tubal, ovarian and/or uterine), history of infertility and use of ovulation induction and history of contraception was obtained. A total of 66 cases were included in the study.
Results: The frequency of ectopic pregnancy was 0.58% .Mean age was 30 ± 4 years. Multiparous women were found to be more prone to ectopic pregnancy (64%).Most frequent gestational age was 6-8 weeks. Majority (37.8%) of the patients had previous medical induced or spontaneous abortion. 18% had previous pelvic surgery, 15% used different treatments for infertility including ovulation induction, Intrauterine Insemination (IUI), and Invitro Fertilization (IVF) and 9% of patients had history of ectopic pregnancy, 4.5% of patients had Intrautrine Contraceptive Device (IUCD) in situ. 3% of patients had uterine fibroids.
Conclusion: Study has found that previous abortions are major etiological factor for ectopic pregnancy. Further more the other factors were IUCD use, previous pelvic surgeries, infertility, previous ectopic and induced conception cycles which may be the result of a previous pelvic infection that may cause tubal sequelae.
Keywords: Risk Factors, Ectopic Pregnancy, Saudi Arabia (JPMA 61:221; 2011).

Out of total 11,286 deliveries at Obstetrics and Gynaecology Department of RCMC, Yanbu Industrial City, KSA, 66 presented with ectopic pregnancy during the specified study period of four years. The frequency of ectopic was found to be 1 in 171 deliveries that is 0.58%. The risk of ectopic increases progressively with increasing age. The mean age of women was 30 ± 4 years and only 7% (n=5) were more than 40 years old. Twenty four percent (n=16) were primigravida. Multiiparous women found to be more prone to ectopic pregnancy were 64% (n=42). The gestational age ranged between 4-12 weeks and the most frequent gestational age was around 6-8 weeks, 2 patients were more than 12 weeks of gestation. Eighty seven percent (n=58) had some risk factors, 37% (n=25) had previous spontaneous and medical induced abortions (Table). 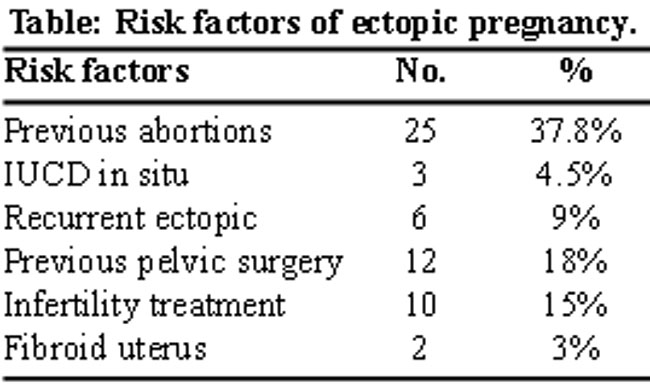 Fifteen percent (n=10) conceived after different methods of assisted reproductive techniques including IUI,IVF gonadotrophin injections and Oral Clomiphene treatment. Three patient had history of use of IUCD, while 18% (n=12) had previous pelvic surgery in the form of caesarean sections, laparotomy for twisted ovarian cyst (n=1), ectopic pregnancy (n=6) and appendicitis(1). One patient was operated twice for ectopic pregnancy, two patients had Fibroid uterus.Mean duration of admission was 3-7 days.