Objective: To determine the prevalence of common mental disorders in Qatari population attending primary health care settings and identify the people at high risk.
Methods: A prospective cross sectional study was conducted from July 2009 to December 2009 at the primary health care centers of the Supreme Council of Health, State of Qatar. A total of 2080 Qatari subjects aged 18 to 65 years were approached and 1660 (79.8%) patients particiapted in this study.
The study was based on a face to face interview with a designed diagnostic screening questionnaire which contained 79 questions on symptoms and signs of of various common mental disorders such as Anxiety disorder, Depression, Obsessive-compulsive disorder, Phobia, personality disorder, Bipolar disorder, Dementia, Schizophrenia, Alcohol abuse and other drug abuse. A standard forward-backward procedure was applied to translate the English version of the questionnaire to Arabic. Also, Socio-demographic charecteristics and medical history of patients were collected. The Diagnostic screening quetionnaire was reviewed and the final score, calculated which determined a provisional diagnosis. Physicians determined the definitive diagnosis by further checking and screening the symptoms.
Results: Of the studied Qatari subjects, 46.2% were males and 53.8% were females. The overall prevalence of mental disorders was 36.6%. Depression (13.5%) was the most common mental disorder, followed by anxiety disorders (10.3%). Qatari women (55.6%, p=0.005) were significantly at higher risk for common mental disorders compared to men (44.4%). Regarding their relationaships with age, Depression (42.9%), anxiety disorder (43.3%), obsessive compulsive disorder (56.9%), phobia (62%), personality disorder (51.6%) and bipolar disorder (47.9%) were found to be most common in the young population aged 18 - 34 years. The highest prevalence of Dementia was seen in the population above 50 years (52.6%), but schizophrenia was prevalent in the age group 35 - 49 years (52.5%).
Conclusion: The study findings revealed that the almost one-quarter of all Qatari adults who attended the primary health care setting presented with atleast one type of mental disorder. The high risk groups were females, younger age and education. The highest prevalence of common mental disorders in Qatari population was depression and anxiety disorder.
Keywords: Common mental disorders, Qatari population, Anxiety, Depresion, OCD (JPMA 61:216; 2011).

Mental disorders are widely recognized as a major contributor (14%) to the global burden of disease worldwide.1 Neuropsychiatric disorders which include unipolar depressive disorder, bipolar disorder, schizophrenia, epilepsy, alcohol and drug use disorders, dementias, anxiety disorders, mental retardation and selected neurologial disorders, the leading causes of disability worldwide, are responsible for 37% of all healthy life years lost through disease.2 Four of the 10 leading causes of disability in the developed countries are mental disorders. Also, they are the most disabling disorders even in low-income and middle-income countries (LAMIC), which can be least able to bear such burdens. Mental disorders are common in all countries, with a considerable variation in their prevalence. Over one third of people in most countries fulfill sufficient criteria for the diagnosis of a mental disorder at some point in their life.3 Many people suffer from more than one mental disorder at a given time.
The World Health Organization4 reported in 2001 that 450 million people worldwide suffer from some form of mental disorders. In the U.S.,5 an estimate of 22.1% of Americans aged 18 years and older - about 1 in 5 adults suffer from a diagnosable mental disorder in a given year. In the U.K, about a quarter, and in the U.S, almost half of people have mental illness at some time during their life. It was reported that prevalence of mental disorders was generally higher than any other class of chronic illness.6 The high prevalence estimates worldwide raised the concerns that even the richest countries could not afford to treat these people.
Mental disorders, though difficult to conceptualize and measure, tend to contribute significantly to disability and mortality as well as an exacerbation of other medical conditions and viceversa.1 Little is known about the extent of severity of untreated mental disorders, especially in less-developed countries. The early detection and treatment of mental disorders, which in most cases is the responsibility of non-psychiatric medical personnel, is essential, especially since symptoms of mental disorders are frequently not recognized. The WHO world mental health survey7 initiative was launched in 2000 to obtain mental health data in large-scale psychaitric epidemiological surveys. The World Mental Health Surveys are generating a wealth of new data on the prevalence of mental disorders and help seeking behaviour in low and middle income countries.
In Qatar, no previous study has been done to examine the prevalence of mental disorders in general population. The Annual Health Report8 of the Hamad Medical Corporation documented that outpatient visits of the Psychiatry hospital have increased considerably (32%) during the last ten years. Also, it is reported generally that there is a high prevalence of psychiatric morbidity in primary health care setting, but this is largely undiagnosed and therefore unmanaged. Hence, this study was conducted in the primary health care centers to determine the prevalence of common mental disorders and identify the high risk groups in Qatari population.

This is a prospective cross sectional study which included Qatari patients aged 18 to 65 years who attended primary health care centers throughout Qatar. Primary health care centers are frequented by all levels of the general population as a gateway to specialist care. The study was conducted among patients, who were visiting 12 health centers; 9 centers from urban area and 3 centers from semi-urban area as a representative sample of the community. IRB approval was obtained from the Hamad Medical Corporation for conducting this research in Qatar.
Data collection took place from July to December, 2009. Qualified nurses who have previous experience in mental health research projects were trained to interview the patients and complete the questionnaires. A total of 2080 Qatari patients were approached and 1660 patients agreed to participate in the study with a response rate of 79.8%. The survey instrument was tested on 100 patients who visited the health centers for validation of the questionnaire. The study excluded patients below 18 years and above 65 years, patients with any cognitive or physical impairment and who refused to give consent to participate in the study.
The data was collected through a validated self-administered questionnaire with the help of qualified nurses. Recruited nurses were Arab nationals who were well versed with the English and Arabic languages. The nurses were aware of the Arabic culture and thus were able to engage and gain the confidence of the study participants if they were not willing to discuss their problems and answer the questions. The questionnaire had three sections. The first part included the socio-demographic details of the patients, the second part with the medical and family history of the patients, and the third part was the diagnostic screening questionnaire which contained 79 questions about symptoms and signs of various common mental disorders such as Anxiety disorder, Depression, Obsessive-compulsive disorder, Phobia, Personality disorder, Bipolar disorder, Dementia, Schizophrenia, Alcohol abuse and other drug abuse. Patients were asked to answer the questions by grading them from 0 to 4; with 0 for "not at all" 1 for "a little", 2 for "moderately", 3 for "quite a bit", and 4 for "extremely".
For some participants who were illiterate, nurses read out the questions for completing them. Following completion of self-administered questionnaire by the patient, the provisional diagnosis score was calculated from the responses, which then was confirmed by psychiatrists through a clinical questioning using DSM-IV criteria. The general diagnostic screening questionnaire was not designed to make definitive diagnosis but rather to identify people at high risk. The main outcome measures of this study were the confirmed diagnoses; 608 mental illness patients.
Student-t test was used to ascertain the significance of differences between mean values of two continuous variables and confirmed by non-parametric Mann-Whitney test. Chi-square and Fisher exact tests were performed to test for differences in proportions of categorical variables between two or more groups. The level p<0.05 was considered as the cut-off value for significance. 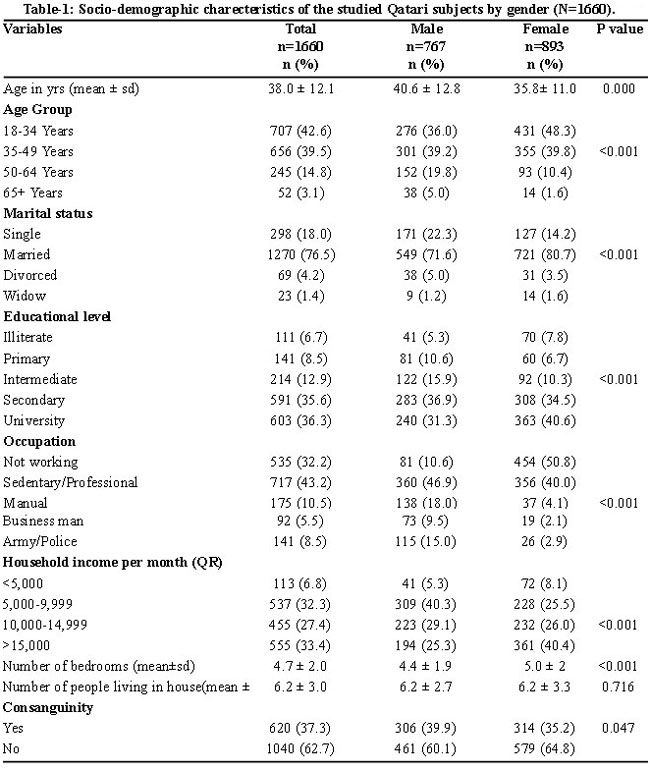 Table-1 shows the socio-demographic charecteristics of the studied subjects according to gender. Of all the subjects, 46.2% were males and 53.8% were females. Most of the respondents were in the age group 18-34 years (42.6%) and majority of them were married (76.5%) and educated to secondary (35.6%) and university (36.3%) levels. There was a significant association observed between men and women in terms of age group, marital status, educational level, occupation and monthly household income (p<0.001) 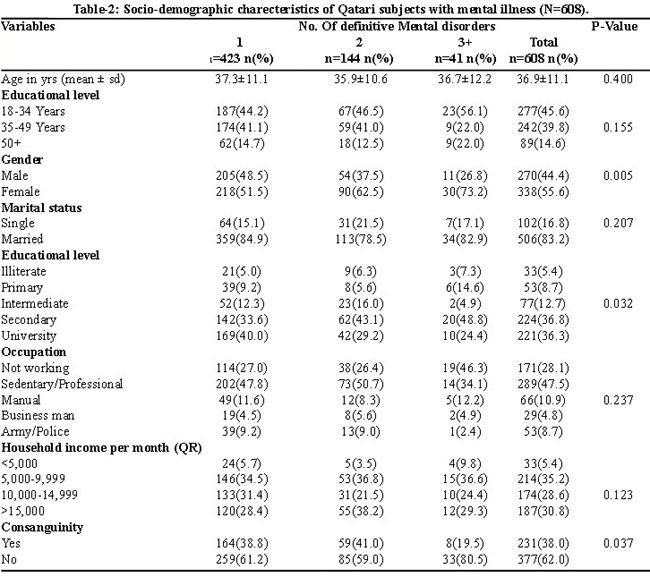 The study findings revealed that almost one-fourth of all adults who attended the primary health care setting presented with atleast one type of mental disorder. This study identified people at high risk for having mental illness, which included females, youngsters and educated people. Women\\\'s mental health is a significant public health issue. The highest prevalence of common mental disorders in Qatari population was depression and anxiety disorder. The young Qatari population in the age group 18 - 34 years were the most affected with mental disorders.
It is suggested that there is an urgent need to assess not only prevalence, but also determinants, treatment, failure and delays in treatment to obtain evidence for policy making.

This study was generously supported and funded by the Qatar National Research Fund- QNRF NPRP 30-6-7-38. The authors would like to thank the Hamad Medical Corporation for their support and ethical approval.