Objective: To evaluate the KAP of GPs in Karachi who treat most of the cases of STDs in their private clinics.
Methods: It was a cross sectional survey conducted by interviewing 103 GPs from different towns of Karachi through an interviewer administered questionnaire based on WHO protocol for control of STDs.
Results: Regarding organisms transmitted through sexual intercourse, 94.2% knew about Neisseria gonorrhoeae while only 38.8% knew about T.Pallidum. Only 26.2% had heard about WHO syndromic management of STDs. Regarding treatment of a HIV positive patient 40.8% said they referred them to an AIDS control programme. Ninety four percent knew the value of sexual history but 55.3% were aware of the recommended treatment regimen.
Conclusion: Knowledge and Attitudes of GPs was reasonably good but improvement is required with respect to management of STDs & HIV. Targeted continuing medical education programmes and special training sessions are recommended.
Keywords: KAP; STDs; HIV; GPs; Pakistan (JPMA 61:202; 2011).

More than 30 sexually transmissible viral, bacterial and parasitic pathogens have been identified. Sexual intercourse is the main mode of transmission for STDs, the other routes of spread being via blood products or tissue transfer, from mother to child during childbirth and pregnancy, and infrequently through other non-sexual means. Approximately every year 340 million cases of treatable STDs occur worldwide in males and females between 15-49 years of age.1
The risk of HIV spread and acquirement have both increased by a factor of 10 in the existence of untreated STDs. Therefore, in the general population STD treatment is a valuable tool for HIV prevention. STDs are often asymptomatic for long periods. STDs and their complications are rated amongst the top five conditions for which adults seek health care in the developing countries.2 Even in the developed countries such as the United States, STDs are one of the leading public health challenges as nearly 19 million infections emerge each year, and about 50% of them are in the population between 15-24 years of age.3 In a study done in1998 in Karachi, Pakistan on male transvestites (Hijras) the prevalence of syphilis was found to be 37%.4
According to WHO report of 2007 approximately 33.0 million people worldwide are living with HIV/AIDS out of which 5 million are in Asia.5 In Pakistan the first HIV case was detected 1987 due to contaminated blood transfusion.6 According to the AIDS epidemic update of Asia by UNAIDS & WHO, in Pakistan HIV epidemic is growing because of insufficient knowledge on HIV and its transmission routes. Persons at risk are not willing to change their behaviour. In Pakistan the prevalence of HIV is highest among injecting drug users as shown in the regional summary of AIDS epidemic update that in Karachi it increased from 1% to 26% in a period of two years (2004-2005) whereas in Quetta it was 24%, 12% in Sargodha, approximately 10% in Faisalabad and 8% in Larkana. Other risk groups have shown relatively low prevalence of HIV in Pakistan.7
In Pakistan, 75-80% of the citizens in case of illness, visit a general practitioner (GP), who can be the main educators for prevention of any disorder including HIV/AID.8 To raise awareness on HIV/AIDS in addition to the governmental facilities, more than 50 non-governmental organizations (NGO) are functioning.6
Karachi is the largest city of Pakistan and the ninth largest city of the world in terms of metropolitan population where approximately 18,000,000 people reside.9 In 18 towns. General practitioners in Karachi, mainly due to better privacy offered to the patients in the private clinic setting, treat majority of the STD cases.10 In this context this study was conducted to evaluate the Knowledge, Attitudes & Practices (KAP) of General Practitioners (GPs) on Sexually Transmitted Diseases (STDs) and HIV/ AIDS in Karachi, Pakistan.

This was a cross sectional survey carried out in Karachi, Pakistan from August 2007 to April 2008. Our sampling frame included GPs with appropriate qualification (at least an MBBS) from 5 towns of Karachi namely Gulberg Town, North Nazimabad Town, Liaquatabad Town, Saddar Town and Gulshan Town selected on the basis of simple random sampling.
WHO Protocol for Control of Sexually Transmitted Diseases was used to develop the interviewer administered structured KAP questionnaire.11 It consists of 35 closed ended questions out of which 13 were on knowledge, 7 on attitudes and remaining 15 questions were on practices.
Questions included diagnosis, risk factors, possible modes of transmission, epidemiological trends, clinical signs and symptoms, STD syndromes, laboratory diagnosis, causative organisms, consequences/complications, treatment protocols for various STD syndromes as well as for individual STDs, and preventive measures. Providers\' counseling skills, attitudes towards STDs and HIV/AIDS patients, and actual practices while dealing with these patients were determined. The questionnaire consisted of two divisions, first dealing with the socio-demographic information concerning the general practitioner and the second containing questions to evaluate the Knowledge, Attitudes and Practices of General Practitioners on STDs and HIV/AIDS.
The trained interviewers used a pre tested interviewer administered questionnaire for individual interviews. The respondents were interviewed after giving informed consent to the interviewer and only those GPs were included who consented to participate in the study.
Microsoft Access 2002 was used for data entry and SPSS 12.0 was used to carry out the Statistical analyses.

Out of 176 GPs approached, 103 (58.52%) consented to participate in the study.
There were 86 males and 17 females with a mean age of 35.34 ± 10.71 years. They were all working in various types of private facilities spread throughout Karachi. All of them graduated in different years ranging from 1959 to 1999. They were working in different capacities and for a period from 1 year to 40 years. The average numbers of patients seen daily were between 4 to 100.
Knowledge of the GPs regarding organisms transmitted through sexual intercourse, and different modes of transmission of HIV are given in Table-1. 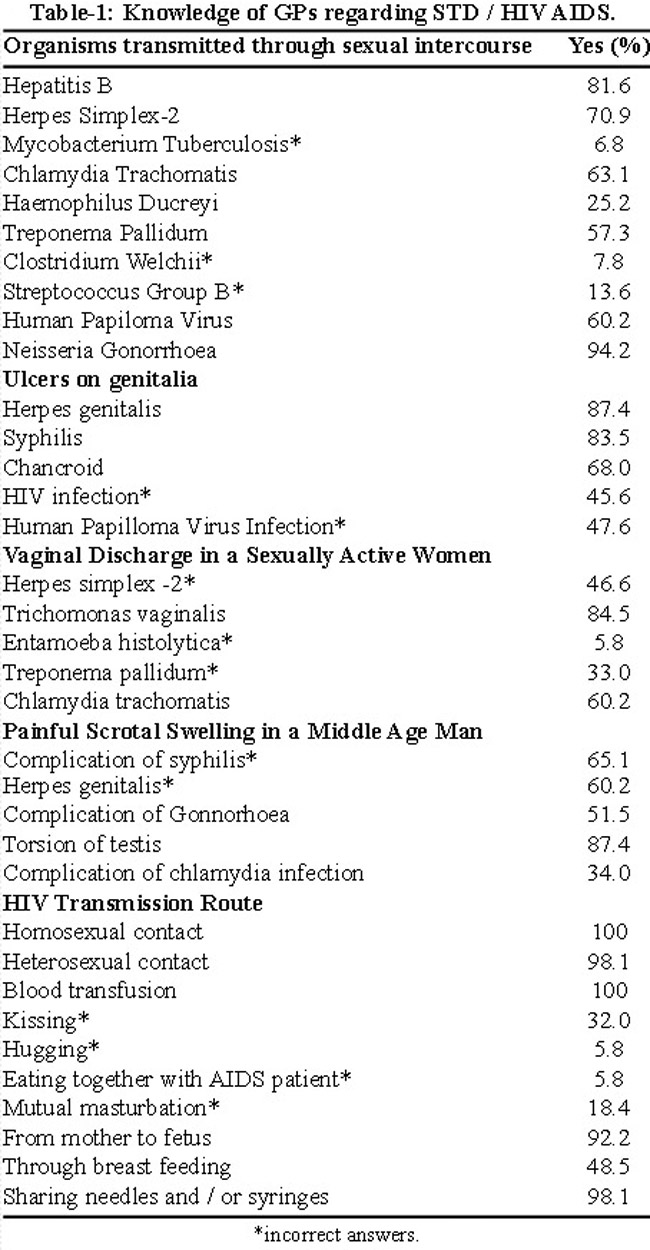 H. ducreyi, the causative organism of chancroid was known to 28.2% only. Fifty eight percent GPs admitted the fact that anal intercourse was more dangerous than vaginal for HIV transmission. Intravenous drug users as a high risk group for HIV was marked by 93.2% of the GPs. Seventy five percent knew that genital warts are a potential pre-cancerous change they should be treated.
Eighty six percent knew that infertility might result from some STDs in both males and females. On question of pussy discharge from urethra, 43.7% knew it is a salient feature of primary syphilis. Only 26.2% practitioners had heard about the WHO recommended syndromic management protocol for STDs.
Attitude of GPs regarding prevention of STDs and HIV/AIDS is shown in Table-2.

When inferred about if a known HIV Positive patient comes to your clinic with complaints of productive cough since one week, only 40.8% responded they will refer to AIDS control programme, whereas in the similar question 45.6% responded to examine the patient with gloves and 13.6% replied to examine as usual. In the question, how most of the HIV infected cases acquired the disease in Pakistan, 22.3%, 14.6%, 61.2% and 1.9% responded by saying "from abroad, Through blood transfusion in Pakistan, Through infected needles/syringes in villages and From mother to children" respectively.
Practice of GPs regarding STDs and HIV/AIDS is given in Table-3. 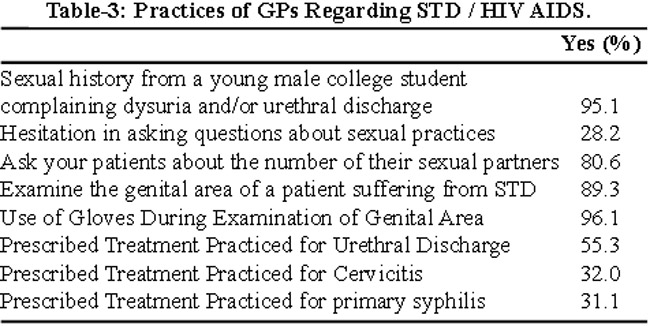 Only sixty three percent of GPs had seen a STD patient in their practice and out of those 20.4%, 29.1%, 8.6% and 4.9% saw 0, <5, 5-10 & 10-15 cases of STD respectively in the last one month.
WHO recommended treatment regimen for urethral discharge, vaginal discharge and primary syphilis was known by only 55.3% (57), 32% (33) and 31.1% (32) of the GPs respectively.
The above mentioned results showed that although knowledge and attitude of our GPs was found to be fairly good, there were definite gaps in their practice especially regarding symptomatology and management of STDs and HIV.

Our results showed an overall increase in knowledge of GPs regarding STDs as compared to a previous study conducted in Karachi on KAP of general practitioners and medical specialists in 2000. This study documented that physicians in Karachi, particularly GPs, had inadequate knowledge regarding symptomatology, diagnoses and treatment of STIs. In comparison with the GPs, specialists were more accurate in managing and counseling STI patients and among them urologists and dermatologists treated STIs better than gynaecologists.12
Another local study conducted in Lahore on health care professionals in 1998 concluded that knowledge was deficient regarding surveillance of spread of HIV/AIDS. They recommended the use of screened blood, sterilized syringes and instruments whereas our study showed that in Karachi GPs recommend screening of all the people (86.4%) and establishing sophisticated labs (67%) for the prevention of HIV/AIDS.13
Comparing our study with a survey on Kuwaiti general practitioners there were certain interesting comments to share as 80% of them were uncomfortable coming into social contact with HIV-positive persons whereas in our study 65% of the respondents had no hesitation in sharing a meal with a patient suffering from STD or HIV and 90.3% felt that they needed proper attention. This displays the difference in behaviour of practitioners of the two different regions. Moreover only 10% of Kuwaiti practitioners approved condom use for protection from HIV sexual transmission whereas 97% of our practitioners believed it to be a preventive measure for the control of spread of HIV.14

The study concludes that KAP of doctors has improved in the past years as now they have sufficient knowledge about the etiology and symptomatology of various STDs. They have shown a more positive attitude towards control and prevention of STDs in our community but still GPs lacked knowledge about the appropriate management of STDs. The presence of insufficiency of appropriate management might be due to the fact that most of our GPs do not attend special training sessions regarding diagnoses and management of STDs and during undergraduate studies very little importance is given to STDs.
The presence of risk groups, lack of awareness and increase in the frequency of STDs and HIV in our country needs effective control measures by creating awareness in the community.
Limitations of the Study:
There are three main limitations of the study; first of all as we excluded public and private hospital based doctors from the study therefore it did not give a generalized idea of KAP of doctors in Pakistan. Secondly this study was conducted in Karachi, which is the largest city of Pakistan with an adequate literacy rate therefore KAP of doctors here cannot be matched with those of rural areas where the majority of the population resides. The last main limitation is that as most of the questions in our study were close ended, we could not acquire information in depth from the respondents.

Causes of smoking in Pakistan: An analysis of social factors

Securing the future: the transfusion of physicians overseas

MDCT, an emerging method of investigation for coronary artery disease