Causes of smoking in Pakistan: An analysis of social factors

Objective: To determine the factors contributing to the initiation and propagation of smoking in visitors to a major tertiary health center in Karachi, Pakistan.
Methods: Seven major contributing factors to the initiation and propagation of smoking were presented to consenting study participants (n=170) in a questionnaire. Participants were then requested to use their experience and opinion to rate each of the given factors on a scale of 1 to 5 regarding its importance as a causative factor in the initiation and propagation of smoking.  Results were analyzed using SPSSv16.0.
Results: Preliminary analysis revealed occupational stress relief as the most important factor contributing to smoking with a mean score of 3.25 ± 1.32. Peer pressure ranked second (Score 3.20 ± 1.42).  Domestic stress relief ranked third with a score of 3.19 ± 1.32. Smokers gave lower rating than non-smokers to most factors. Younger participants gave higher ratings to peer pressure, and most participants were found to have begun smoking at a young age.
Conclusions: Even though the addictive power of nicotine or stress may appear as a factor in middle aged smokers, the root of their habit lies in the initiation due to peer pressure.
Keywords: Smoking, Stress relief, Peer pressure, Nicotine addiction (JPMA 61:198; 2011).

Tobacco is a well established risk factor for various diseases including lung cancer, cardiovascular disease and lung disease.  Passive smoking has been associated with upper respiratory tract infections (URTIs) and bronchial asthma in children.1 The WHO estimates that tobacco will kill more than five million people this year.2 Despite its health risks, the use of tobacco is common throughout the world, especially in developing countries like Pakistan. The consumption of cigarettes in Pakistan was estimated at 90,000,000,000 cigarettes in 2005.2
Pakistan ratified the WHO\'s Framework Convention on Tobacco Control  in 2004, which mentions that member states should endeavor to include counseling services on smoking cessation in national health and education programmes. Such counseling services and support groups are not yet available, and funding for the government\'s tobacco control programme is currently small (Rs. 5 Million).3 However, at least restrictions have been placed on cigarette advertisements.3 An increase in the government\'s efforts to curb smoking is also expected in the future.
When the government turns its attention to smoking cessation programmes, comprehensive data will be needed that provides a thorough understanding of the smokers\' psyche and the factors motivating people towards smoking. The major factors contributing to smoking need to be identified, in order for smoking cessation programmes to incorporate and address them. This data would be of utmost importance in designing control strategies best suited to our population.
Many causes have been attributed to the prevalence and acceptance of smoking in Pakistan, including peer pressure,4,5 social requirements,5 to relieve anxiety6 stress, anger, and frustration,7 along with the addictive nature of nicotine in cigarettes. However no discrimination between domestic stress and occupational stress has been taken when analyzing stress as a risk factor, independently analyzing the two sources may yield important information on our setup.
Borrowing cigarettes from friends has also been reported among 50% of adolescent smokers,8 thus easy availability may play a causal role in smoking.
Aggressive marketing strategies by tobacco companies have also been considered behind the rise in smoking prevalence in developing countries;9 however, since the restrictions on smoking advertisements in Pakistan, it is interesting to see the influence of the media on smoking.
This study aimed to evaluate and compare the social causes of smoking identified in other studies, and to determine how these causes vary with differences in age, level of education, and occupational status among visitors to a major tertiary health center in Karachi, Pakistan.

Seven major causative factors for smoking were identified and selected for this study after an extensive literature search on Pakistani as well as other populations. The identified factors included peer pressure, media influence, easy availability, price, social acceptance of smoking, domestic stress relief and occupational stress relief.
As part of a larger study, individuals in the waiting areas of the consulting clinics of Aga Khan University Hospital, Karachi, were approached and enrolled as study participants. Consenting participants were administered a questionnaire and asked to use their own experience and opinion to rate each of 7 given factors on a scale of 1 to 5 regarding its importance as a causative factor in the initiation and propagation of smoking. Their demographics along with their smoking status and age at which they began smoking were also noted. Participants included were 170, among whom 72 were smokers and the rest non-smokers. Demographic details are shown in Table-1. 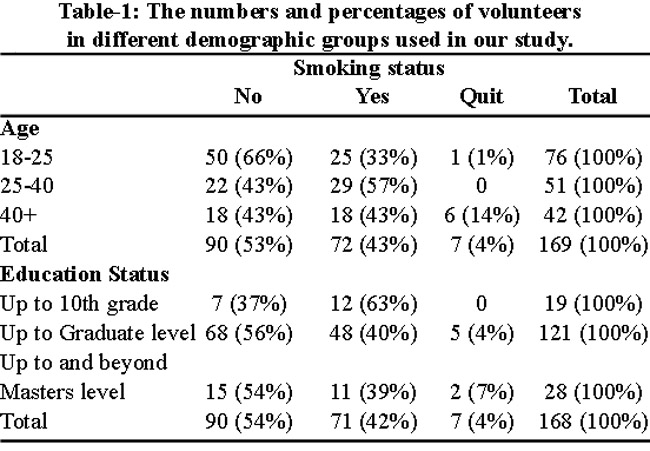 Due to lack of sufficient data and comparable prior studies, it was not possible to calculate appropriate sample size; hence a convenient sample size of 170 was arrived at.
Since all participants were selected from one center this study involved convenience sampling. Still, efforts to reduce selection bias included visiting various clinics of the hospital, approaching people at different times of the day and on weekdays and weekends, and approaching people randomly irrespective of appearance or demeanor. Since the hospital is a major medical center and receives patients from diverse social and financial backgrounds from all over the country, the study participants were projected to be a representative sample of the population; however our limited sample size restricts the generalization of our results.
All interaction with participants was defined in a protocol approved by Aga Khan Hospital\'s Ethics Review Committee.
Data was analyzed using SPSSv16.0 to calculate the mean score of each factor. These scores were ranked in descending order. Mean scores of different demographic variables, such as smokers and non-smokers, were also calculated and compared for significant difference using Analysis of variance (ANOVA). A p-value of <0.05 was taken to be statistically significant. Volunteers who had quit smoking were grouped with non-smokers in our analysis as the group was not individually comparable due to its small size.

The lowest mean score was given to price (2.42 ± 1.29), followed by media influence (2.77 ± 1.31) and social acceptance of smoking (3.15 ± 1.31).
Analysis of age groups revealed that younger participants (n=77, Age = 15-25) gave significantly higher ratings when compared to middle-aged participants (n=51, Age = 26-40) to the factors peer pressure (p- 0.032) and media influence (p- 0.038). Significant difference in these factors was also found between students and professionals upon analysis by education levels; however this may be attributable to the age groups.
Smokers gave significantly lower ratings than non-smokers to all the factors except easy availability (Table-2). Occupational stress relief, which received the highest mean rating from smokers, was given a mean of 3.0 ± 1.32. The ratings given by smokers did not vary significantly with age, level of education or occupation for the factors.
A significantly positive trend was found when comparing the smokers\' age groups to the number of years that they had been smoking (Figure-1), 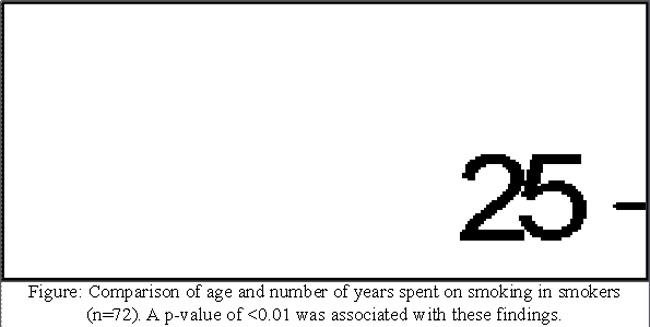 This study\'s  findings showed that smokers do not consider any of the given seven factors as highly important in contributing to smoking, as even the highest mean rating by smokers is a neutral 3.0 (for occupational stress relief). This lends support to the importance of the addictive nature of tobacco as a major contributor towards smoking. Craving for smoking was also identified as the main barrier to smoking cessation in another study with average participants\' age 37.4 years.10
Non-smokers however attributed a higher significance to social factors. It appears that non smokers underestimate the addictive power of nicotine believing that chronic smoking is a result of environmental pressures.
Occupational stress is known to be one of the most common work-related health problems,11 and those exposed to persistent high job strain may have a higher risk of major depression.12 This study showed occupational stress relief to be more significant than a number of other social factors, in contributing to smoking.  Peer support groups are considered effective in reducing stress at work11 and if incorporated into smoking cessation programmes, can help decreasing the smoking habit.
In this study, peer pressure was given significantly higher ratings by younger participants-who had only recently begun to smoke. These results are concordant with a previous study on Pakistani adolescent students which showed peer pressure to be the most important reason for smoking.5 The mean age of smoking initiation reported in studies done in Pakistan ranged from 13.1 (SE 0.2) years8 to 17 ± 12.7 years.13
Parents are known to influence their children\'s behavior; adolescent girls with smoking mothers tend to develop chronic smoking when compared to those whose parents do not.14 A study in Karachi also found a significant association between smoking in adolescents and smoking among their parents, uncles, peer smoking and spending leisure time outdoors.8
A study on Brazilian women shows that exposure to smoking-prompting behaviours through family members, peer pressure, media and easy access/low cost of cigarettes were contributing factors to initiation. It also points out that stress/anxiety-relieving benefits, weight control, access/low cost of cigarettes, being around smokers and risk-exempting beliefs decrease the initiative towards cessation.15
The ratings given to the causative factors in this study did not vary significantly with level of education of the participants. Thus, peer pressure, stress or social acceptance are probably not behind the higher prevalence of smoking reported in illiterate groups,16,17 and these results support the suggestion that low awareness of the adverse effects of smoking among illiterate groups  plays a causal role in smoking.16,17 However, there is evidence elsewhere that most smokers admit knowing that smoking is harmful to their health.8 Perhaps, people with low levels of literacy pay less attention to their health. At any rate, it appears important that the public, both literate and illiterate, should be made to understand how and to what extent smoking adversely affects health.
The low ranking of media influence as a causative factor in smoking is reflective of the decline in media advertisements for cigarettes, and is also concordant with the results of a recent study on school-going children in Islamabad and Lahore,18 and one on adolescents in Karachi,8 which reported no significant association between seeing advertisements for cigarettes on billboards and tobacco use.
An overall review of literature places peer pressure and proximity to smokers as the most important factors leading to chronic smoking in adolescents. Most smokers begin in their youth and continue smoking from there on. Even though the addictive power of nicotine or stress appears as a factor in middle aged smokers, the root of their habit lies in the initiation due to peer pressure. Keeping the above in mind the authors of this study recommend that any interventional strategy to prevent smoking should have a primary component targeting young peer groups and adolescents, with secondary components of cessation and support programs for work-related and domestic stress.
It is worth noting that convenience sampling and the small sample size of our study (170) restricts the generalization of our results, especially when comparisons of different demographic subgroups are made, which further reduce the sample size of each group. Also, statistics of public opinion may not be the most accurate evidence for an issue as complex as the causes behind smoking. This study does however provide supportive evidence and direction on this topic.

Securing the future: the transfusion of physicians overseas

MDCT, an emerging method of investigation for coronary artery disease