Letter to the Editor

Madam, the frequency of intracranial haemorrhage (ICH) in intracranial neoplasm patients ranges from 2% to 5% in scientific literature.1 It may occur in all brain tumours to a varying degree and extent, and in some cases may even be massive. Massive haemorrhage mostly occurs in more malignant tumours, such as glioblastoma multiforme (GBM) or metastases.1 GBM accounts for 15 to 20% of all intracranial neoplasms. Imaging characteristics of GBM are variable. However, most GBM lesions reveal a pronounced mass effect and heterogeneous enhancement with centrally necrotic regions on computed tomography (CT).1 GBM is easily identified on magnetic resonance imaging (MRI), but there are some non-characteristic findings that may be misinterpreted as a non-neoplastic disease. Here we describe a case of GBM with imaging findings mimicking ICH, thus confusing the diagnosis with non-neoplastic pathology.
A 38-year-old man, with no known co-morbid, presented to Emergency Department of Aga Khan Hospital, Dar es Salam, Tanzania with sudden severe headache, generalized tonic clonic seizures, inability to move left side of the body, and subsequent loss of consciousness. All his symptoms progressed within 6 hours. On arrival, he could localize with right upper extremity, had no eye opening, and verbal response was just mumbling sounds. He had anisocoria with right sided dilated and fixed pupil. The patient was intubated and was given phenytoin infusion. A CT scan of the brain was done which showed right parietal bleed with a ring-enhancing pattern and an impending herniation (Figure-1A). 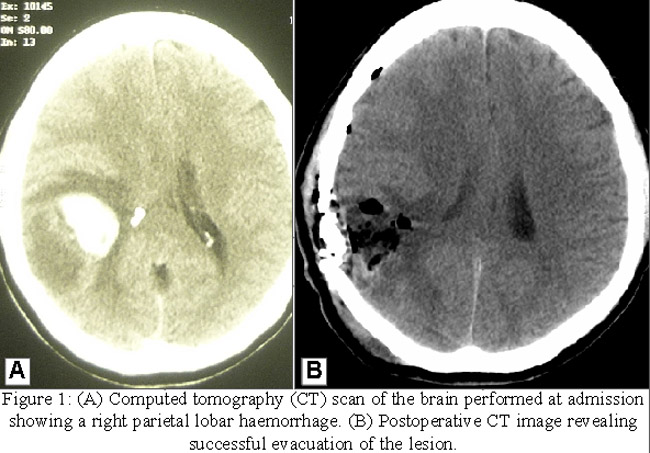 A significant right temporal oedema was noted in the vicinity of the bleed. The digital subtraction angiography (DSA) was not possible as it is not available in the whole country. Thus, the patient was moved to the operative room with a preliminary diagnosis of an arterio-venous malformation (AVM) or an infective mycotic aneursymal bleed. A right parietal craniotomy was done and haematoma with suspicious necrotic brain matter was evacuated (Figure-1B). The patient remained haemodynamically stable peroperatively and was extubated 24 hours after the surgery. Postoperatively, his pupils reverted back to normal and he started moving left side as well. After extubation, he started responding to commands, and was mobilized on third post-op day. He had receptive dysphasia initially with restlessness which settled in next few days. The patient was discharged on 10th post-op day. Later on, the histopathology report showed features consistent with a high grade glioma which was identified as GBM. The patient subsequently underwent radio- and chemotherapy (temazolamide), and after almost a year follow-up, he had a good functional status.
GBM mimicking non-neoplastic cerebral lesions and primary brain lymphoma has been reported in literature.2,3 Can et al4 reported a case where traumatic haemorrhage was found to originate in an underlying giant cell GBM. Cemil et al5 have also reported a case of GBM mimicking AVM. Based on our case and previous literature, we conclude that glial tumours can present in different forms. GBM should be considered in the differential diagnosis of ICH, especially in the absence of predisposing factors for ICH. The association of tumours and vascular malformations should always be taken into consideration and preoperative radiological investigation should be performed explicitly in cases that have intraparenchymal haemorrhage.

The impact of atmospheric pollution on vitamin D status