Thrombotic occlusion of a prosthetic valve continues to be an uncommon but life threatening complication of mechanical valves. However, recurrent prosthetic valve thrombosis is yet a rare complication. Urokinase and tissue plasminogen activator (tPA) have previously been used with success in cases of recurrent thrombus formation and/or failure of streptokinase treatment. We report the first three cases of recurrent prosthetic mitral valve thrombosis in Pakistan which were treated with Reteplase that resulted in re-establishment of adequate blood flow across the valve with reduction of mean gradient to normal.
Keywords: Mechanical valve thrombosis, Reteplase, thrombolysis.

Rheumatic mitral stenosis is the most frequently encountered valvular pathology in developing countries1 and often requires surgical replacement with prosthetic valves. Prosthetic valve thrombosis is a life-threatening condition that requires prompt detection and surgical intervention.2 Traditional treatment is emergent surgical replacement, but intravenous thrombolysis provides a non invasive alternative.3 In patients with recurrent prosthetic valve thrombosis and/or failure to streptokinase treatment, Urokinase and tissue plasminogen activator (tPA) have previously been used with success4 and their efficacy assessed and validated from haemodynamic parameters derived from echocardiographic examinations as well as on clinical grounds. We report, to the best of our knowledge, for the first time in Pakistan, three cases of recurrent prosthetic valve thrombosis successfully treated with reteplase with immediate complete regression of clinical and echocardiographic abnormalities.
Case-1:
A 37 years old lady, with underlying rheumatic heart disease and complaints of frequent episodes of dyspnoea and palpitations, underwent mitral valve replacement surgery with a 27mm Carbomedics mechanical valve. Patient was discharged in a stable condition after surgery on warfarin. However, she remained poorly compliant to her medication during subsequent follow-up. Approximately 2½ months later, she presented to the Emergency Room with NYHA class IV dyspnoea. Clinical evaluation and chest X-ray suggested acute pulmonary oedema. Echocardiography showed 11 mm thrombus on anterior disc with restricted movement and mean gradient across mitral valve of 20mmHg. Patient was given Streptokinase in a dose of 250,000 IU over 30 minutes followed by infusion at the rate of 50,000 IU/hour for 36 hours. Subsequent echocardiographic evaluation revealed mean gradient of 1.7mmHg with excellent opening of anterior and posterior discs and no thrombus. After successful thrombolysis, the patient was observed for 2½ years as a part of regular follow up on monthly basis when she again presented with acute pulmonary oedema and NYHA class IV dyspnoea with INR in sub therapeutic range. Transthoracic echocardiography (TTE) revealed 10 mm thrombus over mitral valve with mean gradient of 17.5 mmHg (Figure-1A,1B). 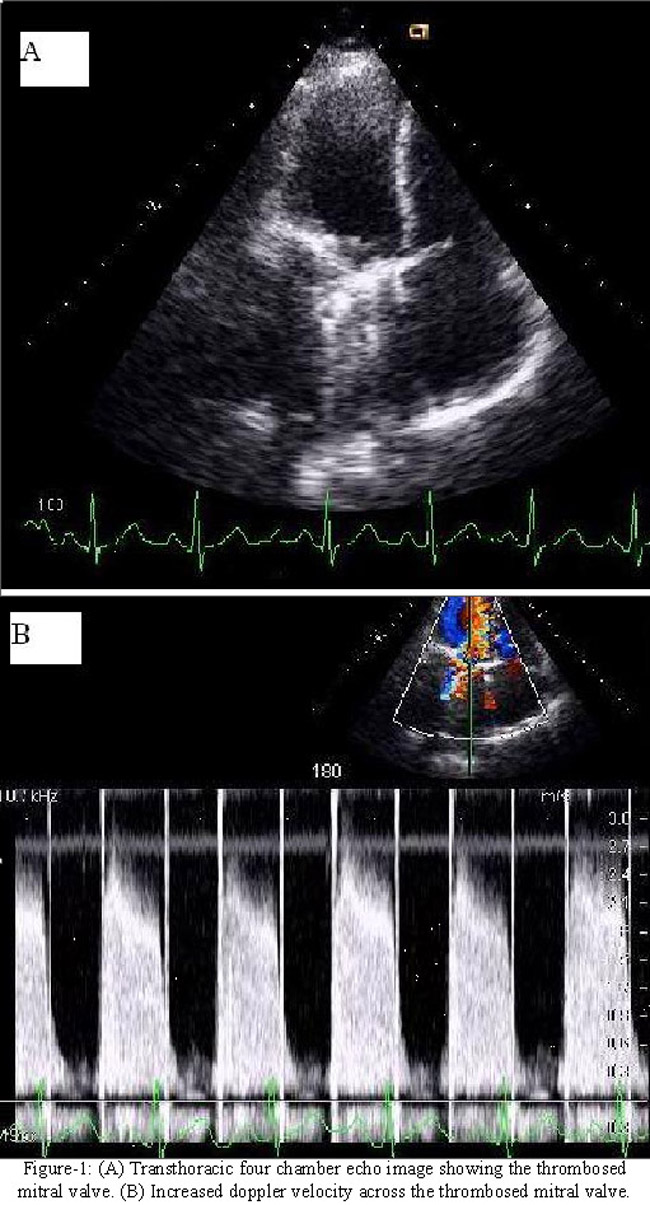 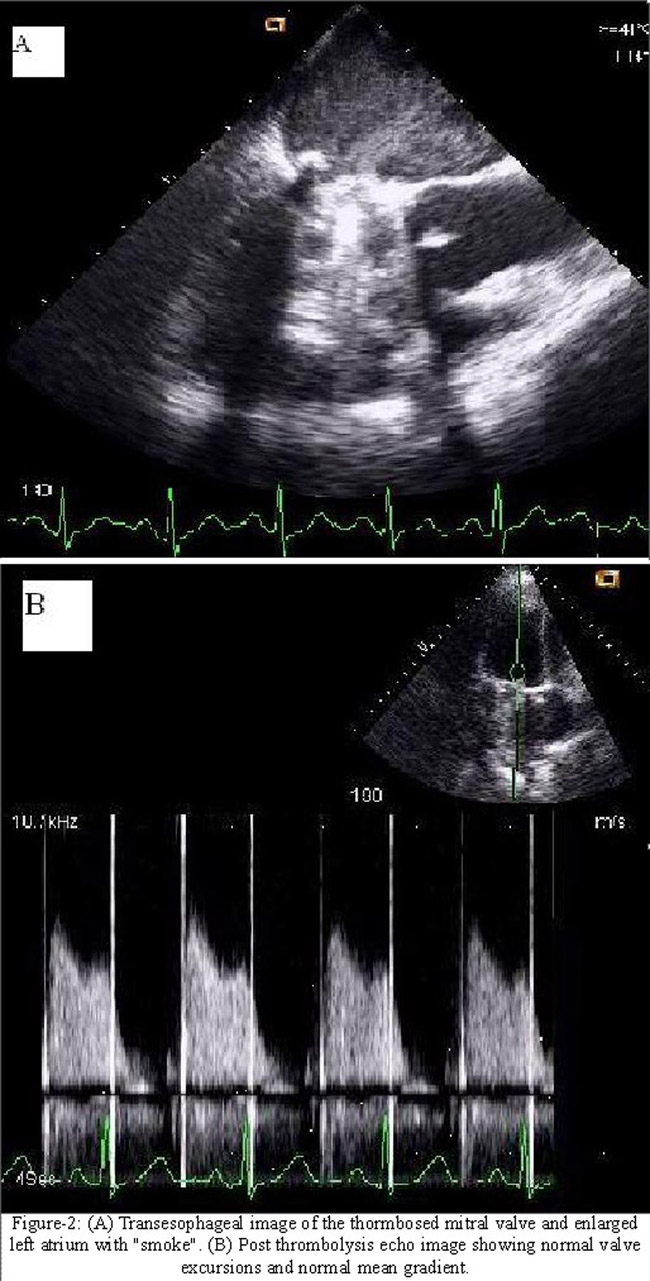 The reported incidence of thrombosis of prosthetic mitral or aortic valves ranges from 0.03 to 4.3 percent per year,5 in tricuspid position, incidence has reportedly been as high as 20% and is associated with substantial morbidity and mortality due to valve dysfunction, distal embolization, and the need for reoperation.6
Thrombectomy or valve replacement is the conventional treatment for this condition, with an associated mortality rate ranging from 4.7 to 20 percent. Thrombolysis is emerging as a promising alternative to surgery, particularly in critically ill patients, with a success rate ranging from 75 to 83 percent.7
Prosthetic valve thrombosis has been divided into two types, Obstructive Prosthetic Valve Thrombosis (OPVT) and Non-Obstructive Prosthetic Valve Thrombosis (NOPVT).
Both OPVT and NOPVT can present with systemic thromboembolism and heart failure, but it may be asymptomatic. Trans-Esophageal Echocardiography has emerged as the technique of choice for diagnosis and management.
There are three treatment options; surgery, thrombolysis and anticoagulation.
Surgery carries a high hospital mortality risk in severely sick patients. Surgical mortality may reach 69%, depending on NYHA class and need for emergency surgery. Thrombolysis has been successful in 80% of cases, with a mortality of 4%, depending on obstruction and functional class. Embolic complications were 8-10% depending on obstruction, but not on thrombus size.8 Heparin treatment has been successful only in NOPVT, if thrombus diameter is less than 5 mm.
Based on the latest evidence, thrombolysis should be first-line therapy, regardless of obstruction and functional class, if thrombus diameter is greater than or equal to 5 mm and there are no contraindications. Because surgery is invasive and quite expensive, noninvasive thrombolytic therapy may be a practical and effective treatment option. Heparin can be used initially for small non-obstructive thrombi, particularly if thrombolysis is contraindicated. While heparin may be used as an initial treatment for NOPVT, thrombolysis is superior if thrombi are > 5 mm in size. Surgery should be reserved only for patients in whom thrombolysis is either contra-indicated or has been ineffective, independent of NYHA class.
In the setting of recurrent prosthetic heart valve thrombosis or failure of streptokinase treatment, Urokinase and Tissue plasminogen have been used with safety and success.10 Success was significantly higher with non-obstructive as compared with obstructive thrombi (75 percent vs. 40 percent).11 The immediate efficacy was better for thrombosed aortic prosthesis than with the mitral prosthesis (85% versus 63%).
With particular attention to comparisons between the fibrin-specific tissue plasminogen activators (Alteplase, Reteplase and Tenecteplase) and the non fibrin-specific activators (Streptokinase or Urokinase plasminogen activator), the former are anticipated to be more efficacious and safer than nonspecific agents because of their pathophysiologically restricted mechanism of action. These agents act to convert plasminogen to plasmin, which in turn cleaves fibrin as part of the lysis process.
Since fibrin-specific tissue plasminogen activators have been found to produce thrombolysis faster than other thrombolytic agents in patients with myocardial infarction and has been used safely in a few patients with prosthetic-valve thrombosis, we used reteplase as first-line therapy for recurrent mitral-valve thrombosis.
We report three cases who had successful thrombolysis with reteplase and achieved significant clinical and echocardiographic improvement. Moreover, administration of Reteplase in all three patients established adequate blood flow across the thrombosed valve with reduction of mean gradient down to normal. All patients responded to lytic therapy without any complications. Serial echo doppler parameters were monitored in all patients to assess the need for additional dose of lytic agent in order to tailor the duration of thrombolytic therapy and to quantify its efficacy.
Our report suggests that in case of recurrent prosthetic valve thrombosis in patients who have previously been treated with streptokinase, reteplase is an excellent therapeutic option as an alternative to surgery with promising results especially in critically ill patients.
Furthermore, thrombolysis guided by trans thoracic echocardiography is a safe and effective method that may expand the indications for nonsurgical treatment of prosthetic valve thrombosis. By using serial echocardiography, the dose and duration of thrombolytic therapy can be tailored to the patient\'s requirement for normalization of valve haemodynamics.
Streptokinase, a widely used effective thrombolytic agent has a drawback of serious allergic reaction due to antibody formation against its antigenic structural foci. The association between antibodies and an immune reaction occurring after treatment with streptokinase is well known and may result in clinical failure of activation of fibrinolytic system by streptokinase especially in the presence of high serum titers of anti-streptokinase antibody.12 Therefore, second dose of streptokinase is not warranted within six months of previous administration. Antibodies may persist in serum for up to 4 years hence, if thrombolysis is necessary during this period, another drug e.g. antihistamine or pre treatment with neutralizing antibody, ought to be used to prevent hypersensitivity reaction, though within six months it is absolutely contra indicated. On the other hand, as compared to reteplase, streptokinase is widely available in most of the tertiary care centers in Pakistan and it is cost effective. Due to these reasons, streptokinase should be the first choice for thrombolysis in mechanical valve thrombosis in developing countries. However, in view of its antigenicity, streptokinase may be associated with serious anaphylactic reaction in critically ill patients with recurrent prosthetic valve thrombosis who have previously been treated with streptokinase. In such patients, reteplase is an excellent alternative thombolytic agent. The benefits of reteplase over other lytic agents are because of its rapid thrombolytic activity, higher efficacy, good overall safety profile and convenience of bolus doses, requiring no adjustment for body weight.