Internal carotid artery occlusion is generally taken to contraindicate carotid endarterectomy but this case report indicates that transient cerebral ischaemic events (TIA) can occur when the common carotid artery is occluded with perfusion of the internal carotid artery from the external carotid artery. Treatment involved an adaptation to conventional surgery which preserved cerebral blood flow as well as eliminating the embolic source.
An internet search of the medical literature has not identified a similar presentation or management of a patient with TIA\'s. 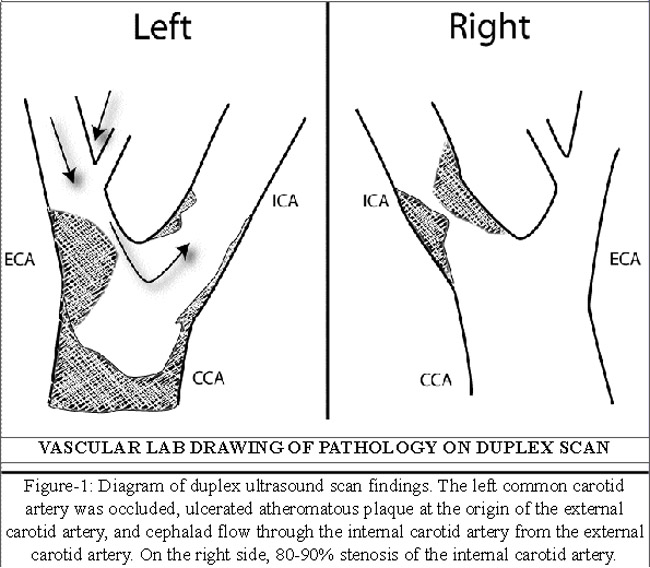 The patient made an uneventful recovery and was discharged home on day three with appropriate medical therapy and plans for interval re-admission and contra-lateral surgery.
Before the re-admission, the patient presented again with left arm weakness. No abnormalities were seen on computerised tomography of the brain and there was also no change to the earlier ultrasound scans in the right carotid artery system. On the left side, retrograde flow from external to internal carotid artery with good patency was confirmed. A conventional right internal carotid endarterectomy was undertaken and the patient again recovered uneventfully and was discharged home.
Carotid duplex ultrasound at four months and outpatient follow up at six months confirmed both radiological and clinical success from the surgery.

This patient presented with TIA\'s affecting both sides and for which duplex ultrasound confirmed significant disease of both carotid arteries. It has been estimated that approximately 36,000 patients in the United Kingdom at an incidence of 0.5 per thousand experience a TIA and 125,000 suffer a stroke in a year.1 TIA\'s are recognised as an important precursor of strokes and offer a short window of opportunity for treatment of hours or days.2 The majority of strokes arise from arterial embolism to the brain of which approximately one in ten originate in atherosclerotic plaques affecting the carotid artery bifurcation.3 This carotid artery disease is traditionally treated by endarterectomy following the principle of ensuring smooth, unobstructed blood flow to the brain.
For this patient, given the recent bilateral symptoms and the combination of severe right internal carotid artery stenosis and occluded left common carotid artery, it was logical to initially plan to deal with the right sided disease by conventional endarterectomy. However, new symptoms from the left side on the morning of surgery prompted a last-minute change of plan to treat the left side. The combination of findings at the left carotid bifurcation resulted in the innovative approach of ligation and re-anastomosis of the external carotid artery to the internal carotid. Had the right internal carotid flow firstly been restored to normal, then it is possible that this could have resulted in reversed flow down the left internal carotid artery and resolution of the risk posed by the ulcerated plaque at the external carotid artery origin. Ultrasound following the right endarterectomy could then have been used to gauge the need for treatment to the left side. However, it was felt that the very late symptoms from the left side could not be ignored and, with a ready surgical solution available, this side was treated first.
This case is unusual both from the aspect of symptoms occurring bilaterally within a short time but also from the perspective of the need to change the management plan at short notice and of the unusual surgical procedure required to deal with the left carotid artery.

This novel surgical treatment excluded the embolic source and preserved internal carotid artery flow on the most recently symptomatic side in a patient presenting with recent repeated bilateral TIA\'s despite an occluded left common carotid artery.