Coronary calcification is a common phenomenon of coronary artery disease. In cases of significant calcification the coronary lesion becomes resistant, in-distensible and difficult to dilate. Hence, one has to change the Percutaneous Coronary Intervention (PCI) procedure while dealing with this type of calcified lesion. Direct stenting procedures are not suitable when the calcification is visible and predilation with a balloon catheter is mandatory before stenting. Inappropriate predilation of calcified lesion carries the risk of inadequate stent expansion. Lesions that can not be dilated with a balloon catheter due to lesion rigidity may also be amenable to Cutting balloon Angioplasty (CBA),1,2 and Rotational Atherectomy.3 We describe a case in which coronary calcification was overlooked initially and stenting was done after insufficient predilation resulting in PCI failure despite of diligent and strenuous efforts.

A 55 years old hypertensive male had an acute anterior wall myocardial Infarction (MS) two months back for which he was successfully thrombolysed and discharged back home. Later on he underwent Nuclear Imaging test that revealed inducible ischaemia of moderate intensity in LAD territory. His coronary angiogram showed tubular tandem lesion in mid LAD. Elective PCI was planned and lesion was accessed with Judkins Left (JL) 3.5 guiding catheter and Balanced Middle Weight (BMW) coronary wire. The lesion was predilated with an undersized balloon (2.5 x 18) up to 12 atm proximally and 8 atm distally where the lesion was not apparently looking critically stenotic (Figure-1A). 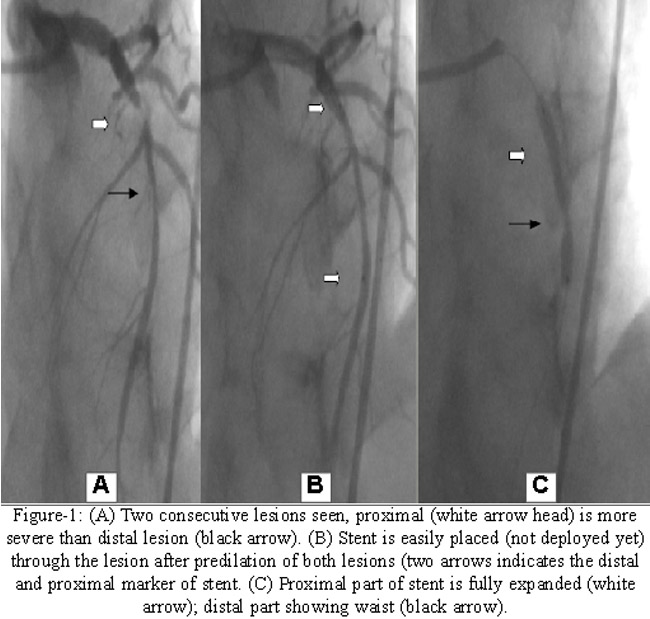 After that Bare Metal Stent (BMS) 3.0 x 24 (Driver) was placed with some difficulty and deployed at 14 atm for 35 seconds. Surprisingly, the result was underexpansion of the distal segment of the stent where the lesion did not appear to be severe (Figure-1-B and 1-C). That underexpansion was dealt with Non Compliant (NC) balloons of 3.25 x 12 up to 20 atm of inflation and then with 3.5 x 9 up to 22 atm, but the result was disappointing. After that the guiding cathter was replaced with XB 3 and another (buddy) wire was advanced into the same vessel. Then underexpanded part of the stent was tried to approximate with conventional balloon (Voyager) 3.5 x 12 along with buddy wire and it inflated up to 20 atm for 40 seconds. Then another balloon (voyager) 3.75 x 08 (bigger in diameter and shorter in length) was taken and inflated up to 18 atm for 50 seconds. Unfortunately, both of these balloons along with buddy wire failed to expand the stent (Figure-2A). 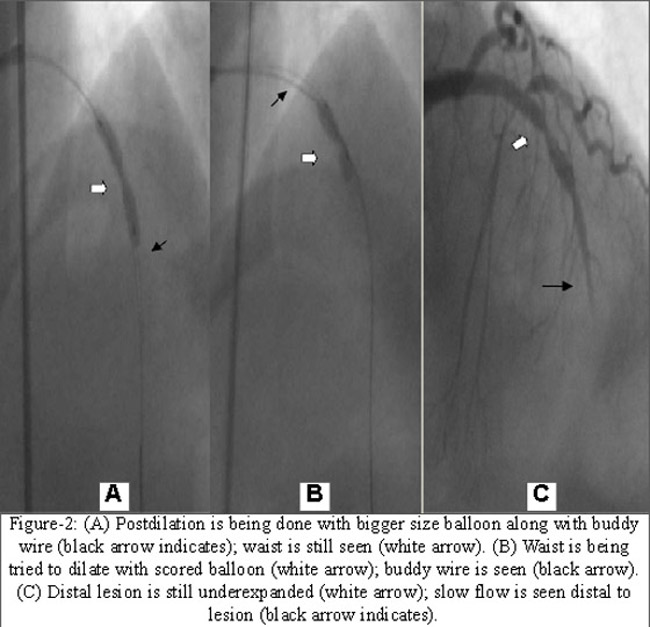 Calcifiied lesions carry the risk of inadequate stent expansion because of rigidity and reduced vessel distensibility. Fibrocalcific plaques have been found to lower the degree of stent expansion.4 Therefore, the proper selection of lesions is of crucial importance for stenting. In our case, the calcification was not initially noted during the angiogram, but a severe, focal and circumferential calcification was revealed later on at the target lesion.
The buddy wire technique is used to treat resistant lesions.5,6 With this approach, a coronary guidewire is passed alongside a conventional balloon catheter. When the balloon is inflated at high pressure, the adjacent wire creates a focused force like the microblade of a Cutting Balloon. It is important that the parallel guide wire is in front of a rigid atherosclerotic plaque. In our case when NC balloons failed to expand the stent, we used this technique with conventional balloons of sizes bigger than the stent. But high inflation pressure for prolonged period gave us no optimal results (Figure-2A).
The Cutting Balloon has also been used to treat resistant lesions.1,2 This catheter has 3-4 atherotomes (microsurgical blades) longitudinally attached to the balloon, with which balloon inflation induces cutting or incision of the atherosclerotic plaque. These microtomes, approximately 0.25 mm in height, are 3-5 times sharper than conventional surgical blades. The microtome edge initiates an indentation into the plaque, after which the shear force applied by the balloon inflation propagates the crack. Depending on balloon size, the cutting force at the blade edge is enhanced 200,000-400,000 times.7 Previous studies1,2 demonstrated successful Cutting Balloon angioplasty in resistant lesions with and without calcification that had been undilatable with conventional balloon catheters inflated at high pressure. Because of the microblades, the Cutting Balloon is less flexible and has a larger profile than conventional balloon catheters, which makes delivery failure to be more frequent with the Cutting Balloon compared to conventional balloon catheters. Scoring balloons are also being used to treat resistant lesions and in-stent restenosis. Cutting balloon and scoring balloon may be different in effect as they are structurally different. However there is no head to head comparison. Scoring balloon integrates at least one or more flexible stainless steel wires adjacent to the dilatation balloon. These wires focus the balloon\'s dilatation force to create longitudinal expansion planes in the coronary plaque and / or score the lumen surface and stabilize the balloon across the target lesion.8,9 In our case large diameter scoring balloon failed to get into the lesion therefore smaller diameter scoring balloon was taken and high inflation pressure was given to expand the stent but unfortunately we could not achieve the good result. Finally, cutting balloon was used and high inflation pressure for prolonged period was given but the result was total disappointment and we had to give up the procedure (Figure-2-B and 2-C).
Kang WC et al10 reported a case in which direct stenting was done in mid Right Coronary Artery (RCA) resulting in underexpansion of the stent due to calcification in the lesion that was not apparent initially. They used incremental upsizing of CBA and started with small diameter cutting balloon initially and then replaced by larger ones and got the successful expansion of stent. In our case we tried hard to expand the stent with conventional and scoring balloons and then took a cutting balloon. Could we get the success with incremental upsizing of CBA long before using the buddy wire technique and other balloons? It is difficult to answer.
Several other techniques, including rotational atherectomy11 and hugging balloon technique12 have been used for the treatment of calcified and resistant lesions. Rotational atherectomy is known to debulk calcified lesions effectively, resulting in increased compliance and a cylindrical geometry of the treated vessel. Hugging balloon inflation technique,12 which requires crossing the lesion with two guide wires and two balloon catheters followed by simultaneous inflation of both the balloon catheters in a lesion.
In conclusion, our case showed that it is important to check for the presence of calcification at the lesion prior to performing PCI. In the presence of calcification try every effort to break it and prepare the vessel for stenting before deployment. Once the calcified lesion becomes stented, it becomes more resistant and may not respond to best defined techniques.