Bisalbuminaemia is a rare condition with a variable frequency reported in literature.1-3 It can either be inherited genetically, or is acquired in association with various conditions. In the inherited form, the different alloalbumins reported differ in their genetic composition, with a single point mutation responsible for the variation.1,4 The variant albumin can have a faster or a slower mobility compared to the normal albumin fraction on electrophoresis.1 The inherited form is very rare, and is mostly discovered as an incidental finding on serum protein electrophoresis. It is not usually associated with any clinical manifestations, but may present as a diagnostic dilemma for the unwary.

A 50 year old lady presented to our Chemical Pathology Department with the request of Serum Protein Electrophoresis. SPE on cellulose acetate medium at a pH of 8.9 revealed two distinct peaks in the albumin region — a case of Bisalbuminaemia (Figure-1A). 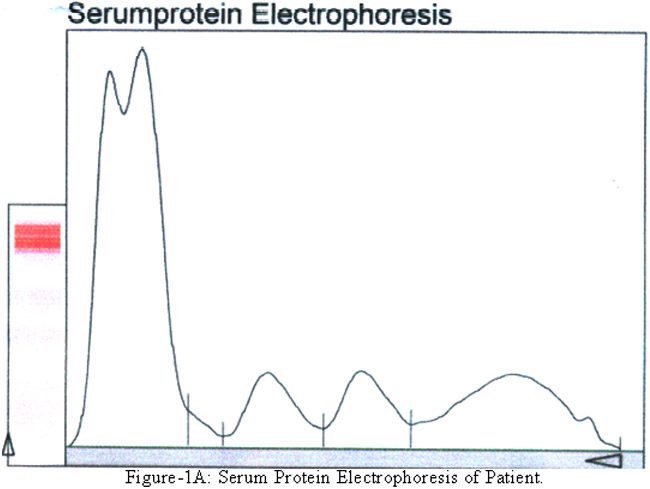 Mixing studies with normal serum in gradually decreasing dilutions of 4:1, 3:2, 1:1, 2:3 and 1:4 showed that the variant albumin fraction had slower mobility and was placed more cathodically (Figure-1B). 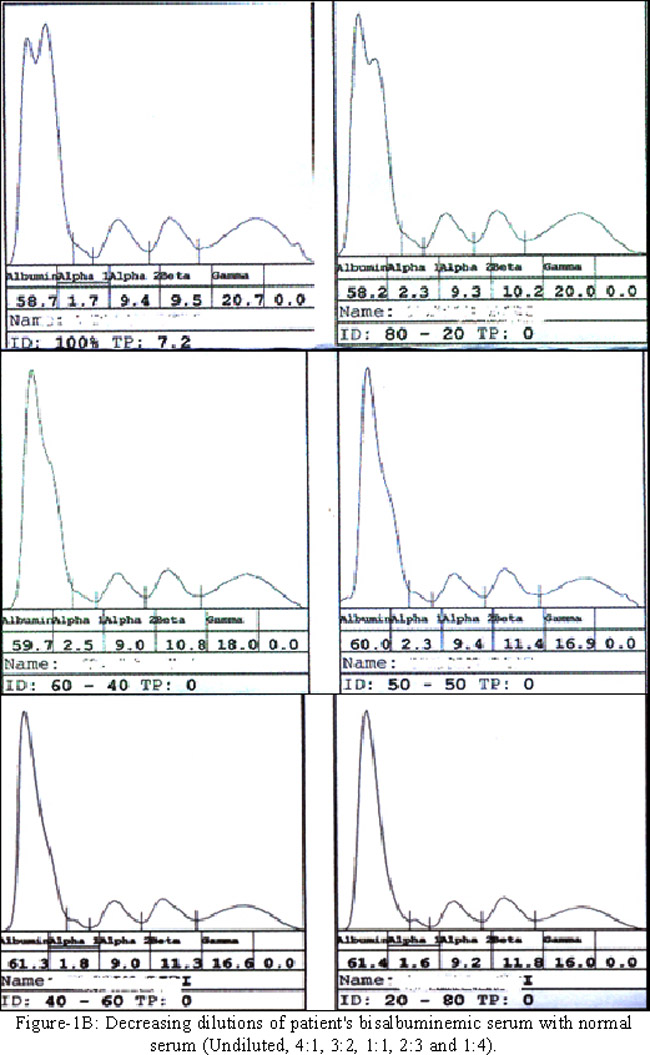 The patient belonged to a Pathan tribe of Zila Bunair in Pakistan. She had been previously diagnosed to have hepatitis C, and received interferon therapy. Her last PCR, performed 9 months back did not detect any residual viral RNA. Patient was currently not on any medication, and did not have any complaints of abdominal pain, fever or jaundice. She however did have complaints of heat intolerance, tremors, palpitations and increased appetite and bowel frequency.
Family history revealed that she was a widow. Her husband had also suffered from hepatitis C infection. She had 9 children, one of whom had past history of hepatitis C and had been successfully treated with interferon, with last PCR negative for viral RNA. He, along with one sibling, reported symptoms of hyperthyroidism, while one daughter had history of toxic multinodular goiter.
Investigations done on the patient showed her serum creatinine, alananine aminotransferase and amylase levels to be within normal limits. Random blood glucose was 91 mg/dl. Her thyroid work-up including free triiodothyronine and free thyroxine levels were also within normal limits.
Results of the preliminary history and work-up did not point towards an acquired cause and rather, suggested a case of hereditary Bisalbuminaemia. To confirm, we repeated electrophoresis on fresh sample taken from the patient, and, after due consent, also performed serum protein electrophoresis on 5 out of the 6 off springs residing in the city. Electrophoresis pattern of two of them (one son with past history of hepatitis C and symptoms of hyperthyroidism, and one asymptomatic daughter) also revealed Bisalbuminaemia (Figure-2A,B) while rest of the children had normal electrophoresis patterns. 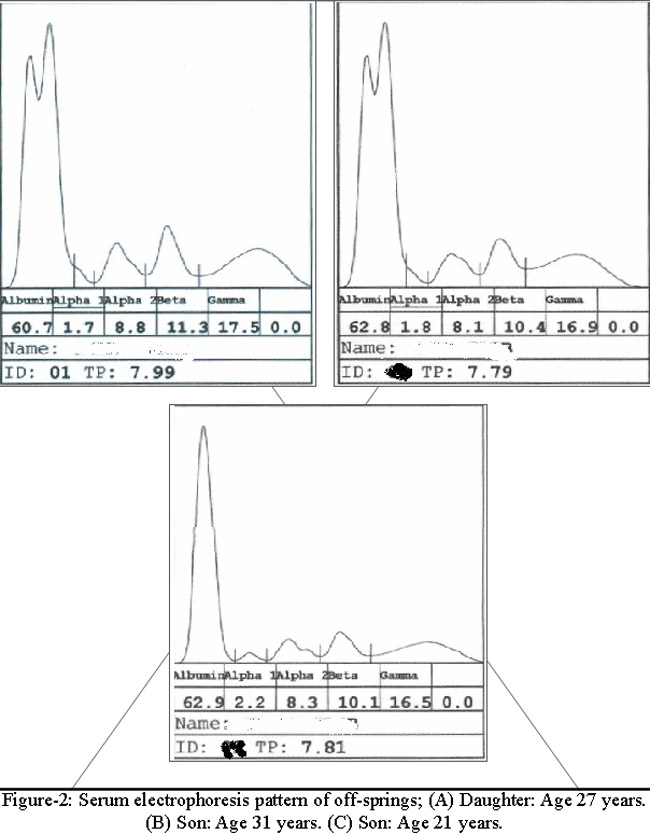 This is a case of hereditary Bisalbuminaemia, with at least three members of the family showing the anomaly, and relevant history and investigations not pointing towards any systemic cause.
Bisalbuminaemia is a rare chemical entity which can either be inherited genetically or acquired. The inherited form is a permanent anomaly, with an autosomal codominant inheritance, while the acquired form is transient. The overall frequency of Bisalbuminaemia is between 1:1000 and 10,000,1,2 though the incidence noted in Indian Punjab is somewhat higher, 0.2%.3
Inherited forms of Bisalbuminaemia are extremely rare and so far have been shown to be only related to hypertriiodothyronaemia or hyperthyroxinaemia. Point mutations are responsible for both of these conditions; familial dysalbuminaemic hyperthyroxinaemia with Arg218AEHis and Arg218AE Pro and hypertriiodothyronaemia with Leu66AEPro.4 The two albumin peaks observed on electrophoresis could be due to the binding abnormalities of the variant albumin fraction. In our case the patient did not have any biochemical indication of thyroid disorder.
The acquired form of Bisalbuminaemia has been shown to be associated with various conditions. Excess of beta lactam antibiotics, resulting in binding of the lactam antibiotics with albumin is one such condition. A case report of a 68 year old male patient with staphylococcal endocarditis and treated with dicloxacillin, showed Bisalbuminaemia on cellulose acetate electrophoresis, which normalized on repeated analysis.5
Delayed lipolysis of albumin by pancreatic lipases in severe pancreatitis or pancreatic cyst can also result in Bisalbuminaemia.6 High amylase levels in Bisalbuminaemia could be due to amylase to albumin binding, an enzymatic change of albumin by amylase, or the presence in serum of other substances that alter the electric charge of albumin.
Monoclonal gammapathy7 and renal diseases2 are reported to be co existent with Bisalbuminaemia and Bellomo et al report diabetes with Bisalbuminaemia.8
Capillary electrophoresis (CEP) has been advocated as the ideal method for detecting this condition and has shown better results than agaroze gel electrophoresis.9,10 Groisman et al reported five cases of Bisalbuminaemia detected on CEP which were missed on agarose gel electrophoresis.10 We detected all of our three cases on cellulose acetate medium, which has also been reportedly used in the detection of this condition.5

Bisalbuminaemia is a rare biochemical entity which can either be inherited or acquired. To the best of our knowledge this is the first reported case of Bisalbuminaemia in Pakistan, which turned out to be hereditary in nature, as it was demonstrated in three members of one family. Further studies are required to determine the prevalence of this condition in Pakistan.