Objectives: To review the clinical experience, complications and outcome of Cardiac Electrophysiology Studies and Catheter Radiofrequency Ablation in treatment of supraventricular tachycardias in Karachi.
Methods: A retrospective review of records of all patients who underwent an electrophysiological study and radiofrequency ablation at National Institute of Cardiovascular Diseases and Aga Khan University Hospital from 2005 to 2007 was performed. Patient\'s demographics, disease and procedural data were collected and analyzed using SPSS.V.II.
Results: We enrolled 168 patients, 150 (89%) from National Institute of Cardiovascular Diseases and 18 (11%) from Aga Khan University Hospital. Sample had 86 (51%) male participants. The mean age was 43 ± 15 years. Indications for procedure were recurrent supraventricular tachycardias (89.9%), Wolff Parkinson White Syndrome with atrial fibrillation (5.9%), syncope (2.4%), and wide QRS tachycardia (1.8%). Final diagnosis was Wolff Parkinson White Syndrome in 80(48%) and Atriovetricular Nodal Reentrant Tachycardia in 88 (52%). The accessory pathway in Wolff Parkinson White Syndrome was located on left side in 61 % of cases and on right side in 39 % of cases. Overall acute success rate for Radio Frequency ablation was 90%. Success rate for ablation of accessory pathway in Wolff Parkinson White Syndrome was 85 % while that for ablation of slow pathway in AV node re-entrant tachycardia was 95%. Complications occurred in one case.
Conclusion: Electro Physiology Studies and Radiofrequency ablation proved to be a safe and effective method for diagnosis and treatment of supraventricular tachycardias in our patients.
Keywords: Supraventricular tachycardia, cardiac electrophysiology study, Radio Frequency ablation, Nodal Reentrant Tachycardia (JPMA 61:173; 2011).

Electrophysiology study (EPS) with Radiofrequency (RF) ablation is a well recognized method for managing cardiac arrhythmias.1 The procedure consists of diagnostic EP study and therapeutic radiofrequency ablation followed for patients with appropriate arrhythmias substate.1 Supraventricular tachycardias (SVT) are principally due to presence of accessory pathways resulting in (WPW) syndrome or dual Atrioventricular Nodal pathways (AVNRT). The safety and efficacy of the procedure in these conditions has been proven in multiple studies.2,3 The success rates for ablation are variable with success rates of 98-100% in some series for AVNRT 50% in tachycardia due to right free wall accessory pathway.1,4
These procedures are usually performed in a cardiac catheterization laboratory using intracardiac electrogram recording equipment. Usually an initial diagnostic EPS is followed by RF ablation in the same session. EP study is performed by introducing multi-electrode catheters in the chambers of the heart. Each pair of electrodes is capable of recording an intracardiac electrogram from its specific chamber. Conventionally catheters are placed in the right atrium, right ventricle, at the Bundle of His and in the Coronary Sinus. The index arrhythmia is induced using different pacing protocols and arrhythmia substrate identified based on electrogram timing. The tip of RF ablation catheter is capable of focally heating and ablating cardiac tissue, hence, modifying the arrhythmias substrate by heating myocardial tissue. Successful ablation results in cure of the arrhythmia.5 On a surface ECG this may be best appreciated by loss of delta wave in those patients with WPW syndrome and ventricular preexcitation (Figure-1).

This is a complex procedure and requires a specialized team approach. One of the major determinants of success in these procedures is operator experience with better results being achieved after the first 250 cases as there is a learning curve.6 This field is relatively new in Pakistan. To the best of our knowledge no prior data has been published on ablation of supraventricular tachycardias from our country. Hence, we aimed to study the clinical experience, complications and outcome of EPS and RF ablation during this learning curve.

This was a retrospective observational study. Data was extracted through a chart review of patients who underwent electrophysiological study and radiofrequency ablation from May 2005 to November 2007 at National Institute of Cardiovascular Disease (NICVD) 360 bed public sector hospital with approximately 50 cardiac admissions daily and AKUH a 459 bed private university hospital with approximately 5 acute cardiac admissions daily. The data collection was done in 2008. All patients who had an EPS and ablation were included. Patients who had an EPS but in whom ablation was not attempted were excluded. Formal approval from institutional review committee and consent were exempted as data was collected from secondary source that is existing records only. All data was kept confidential, protecting patients identification.
Final diagnosis was defined as the tachycardia induced at EPS responsible for clinical arrhythmias.7 Successful RF ablation procedure was defined as index arrhythmias no longer being inducible at the end of the procedure and no evidence of accessory pathway being present.4
A conventional four catheter EPS was performed with catheters in the right atrium, right ventricle, bundle of His and at the coronary sinus. In majority of patients resterilized catheters were used. Tachycardia was induced using standard pacing protocols.7 If tachycardia could not be induced using conventional protocols then these were repeated with patient on dobutamine infusion to raise the heart rate 10% to 20% above baseline. All cases were recorded on an EP Med workstation. Ablation was performed using Medtronic Attakr or Cordis Stockert RF generators using temperature between 50 to 60 degrees centigrade at catheter tissue interface. Left sided accessory pathways were ablated using a trans-septal or retrograde approach depending on operator\'s preference. An EPS was repeated 30 minutes after the last ablation with and without dobutamine to ensure that clinical tachycardia was no longer inducible. Slow pathway ablation in AVNRT was considered, successful even if there was a jump and a single echo beat but no inducible tachycardia.
A 13 item data collection tool was used to collect demographics, disease and procedural data. (SPSS version 11.0 was used, for data entry and descriptive analysis). Categorical data is reported as proportions and continuous data as percentages.

Patient\'s demographics and indications for procedure for 168 patients is presented in Table. 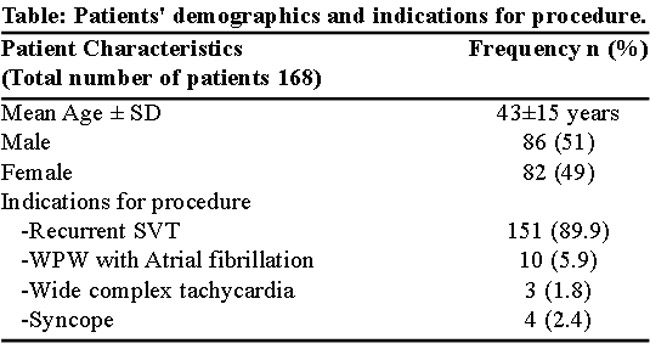 Final diagnosis was WPW Syndrome, both preexcited atrial fibrillation and Atrioventricular Reentrant Tachycardia (AVRT), type of SVT in 80 (48%) and AVNRT in 88 (52%). These included the 4 syncope patients of whom 3 had ablations for WPW and 1 for AVNRT.
Overall acute success for RF ablation was seen in 136/151 (90%) 2/17 (10%) did not responsd to treatment. Complications occurred in one case, that is AV block in one patient with AVNRT. 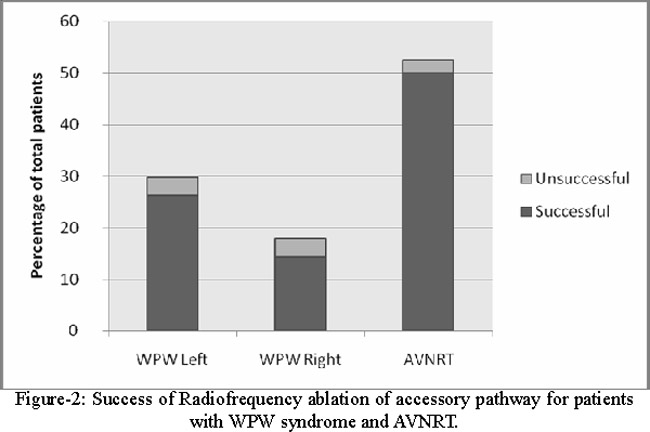 Figure-2 summarizes the results for success of RF ablation.
Among AVNRT patients, acute success rate for RF ablation was observed in 84/88 (95%). The four unsuccessful patients had problems involving atypical AVNRT, corrected Tetrology of Fallot, dextrocardia or left sided slow pathway.
Among WPW syndrome patients the accessory pathway (AP) was located on right side of the heart in 31 (39%) cases while it was on the left side in the remaining 59 (61%). Sixty eight of 80 (85%) patients with WPW were successfully ablated. Success was higher for left sided pathway with 51 of 59 (86%) being ablated as opposed to the right sided pathways where only 25 of 31 (80%) could be ablated successfully. These right sided pathways included 3 patients with Ebstein\'s anomaly and 2 patients with Mahaim type accessory pathways. Each had a single patient with successful ablation.

Overall outcome and clinical experience of EPS and RF in treatment of SVTs patients is encouraging in our centers. Although paroxysmal SVT carry a low mortality risk they can cause significant disability and immediate hospital care. Chronic medical therapy with its side effects and compliance issues is not an attractive alternative.8 RF ablation therapy offers a better cure to such patients. It is a safe and effective procedure for the treatment of cardiac arrhythmias.1 Its safety and efficacy has been proven in many studies.3,8,9 An added value to RF ablation is its cost effective compared to pharmacological or surgical treatment in symptomatic WPW syndrome patients.8 Keeping these benefits in view current American and European guidelines recommend ablation as Class I indication for haemodynamically unstable or for recurrent SVT.9 It is also advocated the first line treatment for all patients with symptomatic WPW syndrome.2 These are strong reasons for patients to have EP studies and curative ablation procedures including in Pakistan. However, physicians refer patients to institutions practicing these procedures for longer times as they tend to have better results and lower complications. Internationally, the reported initial success rate for RF ablation of accessory pathway is 90 to 95% in patients with WPW syndrome1,2,9 and 98 to 100% in AVNRT.1,3,10
Indeed literature supports the notions that new procedure sites have a learning curve and results of ablation procedures improve with experience.10 In a US study unsuccessful cases decreased from 24% in the first 50 cases to 4% after the first 250 cases.6 However despite including patients from early in the learning curve our success rates are only slightly lower than those of established centers. Well documented complication rates of 2.4% including cases of cardiac tamponade, and AV block are known. Mortality rates of 0.8% have also been observed till now.1 We had complication in one patient with no mortality. These success rates and low complications indicate that ablation procedures are equally viable and safe options for SVT in Karachi as they are internationally.
Our major limitation is that the study is retrospective and descriptive in nature. It is also difficult to generalize our results as there were only two operators performing the procedures. Since this was not an analytical study we are not in a position to demonstrate why both our success rate (90%) and complication rate (0.6%) are on the lower side in comparison to other international studies as described above. There are several possibilities for this including that this was early in the learning curve. Another possible reason may be that a more conservative approach towards ablation may have been utilized by the operators as this was a new type of procedure being introduced in this region. Lastly in the resource poor environment of our public hospitals we have only limited varieties of catheters available and these too are reused multiple times to keep costs low albeit possibly compromising success.

Our review of records of patients having EPS and RF ablation show it to be an effective modality for treatment of supraventricular tachycardias (90% success rate) with low complication rates (0.6%). Our results are comparable with international data.