Objective: The relationship between maternal age, duration of infertility, pre-ovulatory follicles, endometrial thickness and motile sperms with intra uterine insemination (IUI) success in women with infertility over 10 years was surveyed.
Methods: We performed a descriptive - cross sectional study among couples (n=26) with a history of infertility for more than 10 years who were treated with IUI. The data was collected between 2000 and 2007 in the fertility ward of Amiralmomenin Hospital of Semnan University of Medical Sciences. Patients underwent a basic fertility workup and the ovarian hyperstimulation was done with clomiphene citrate (CC) and human chorionic gonadotrophin (hMG ) alone or in combination .
A volume of 0.3-0.4 ml suspension of processed spermatozoa (after swim-up procedure) was introduced into the uterine cavity 36h after human chorionic gonadotrophin (hCG) administration. The comparison between variables was performed by chi-square and student\'s test on SPSS (Version 10.0).
Results: The total number of women with infertility over 10 years referring to fertility ward was 26. Seven of them became pregnant after treatment (27%). Majority of these pregnancies (87.5%) were achieved in the first cycle. Pregnant cases were 30-37 years of age with a history of infertility for up to ten years. The comparison of data between two groups showed that maternal age (P<0.03) and number of motile sperms (P<0.05) had a significant relationship with the results of treatment.
Conclusion: Number of motile spermatozoa and women age are factors with the highest impact on pregnancy after IUI treatment in women with infertility for over 10 years.
Keywords: Fertilization, IUI, maternal age, sperm, infertility over 10 years (JPMA 61:165; 2011).

Intrauterine insemination (IUI) is a treatment modality for infertile couples. It can be performed with or without controlled ovarian hyper-stimulation (COH).1 Indications of IUI include unexplained infertility, cervical hostility, mild endometriosis, antisperm antibodies and male sexual dysfunctions like impotency, hypospadias, and retrograde ejaculation.2 The effectiveness of IUI is widely accepted for couples in whom infertility is caused by a male factor or whom infertility is unexplained.3
Several studies have been performed to identify predictors of pregnancy rates in IUI such as maternal age,4,5 number of preovulatory follicles,5 endometrial thickness6 and motile sperms count.4,5
There are conflicting results about the association between woman\'s age and pregnancy rates, where several studies suggested a relationship between woman\'s age and receptivity,7 others have failed to show such a relationship.5,6,8
In addition, the numbers of preovulatory follicles,5 endometrial thicknesses6,7 and the absolute motile sperms that are inseminated4,5 have also been reported as possible predictors for pregnancy rates,5 however, the agreement is fading upon most of them.8,9
Our objective was to investigate the predictive factors affecting the possibility of pregnancy after IUI in our patient population.

We performed a descriptive - cross sectional study among couples with a history of infertility for more than 10 years who were treated with IUI. The data was collected between 2000 and 2007 in the fertility ward of Amiralmomenin Hospital of Semnan University of Medical Science.
Patients underwent a basic fertility workup that consisted of medical history, Confirmation of an ovulatory cycle by ultrasound, basal body temperature and /or mid luteal progesterone. Indications for IUI were male infertility, cervical-factor infertility and unexplained infertility. For each couple, we registered maternal age, duration of infertility, diagnosis, tubal patency, primary or secondary infertility, the number of preovulatory follicles, type of controlled ovarian hyperstimulation, endometrial thickness, cycle number and semen parameters. Women were treated by clomiphene citrate (CC) and human chorionic gonadotrophin (hMG) alone or in combination.
For semen preparation, couples were requested to avoid intercourse for 3-5days before the day of semen collection. Semen samples were collected into a sterile container. After liquefaction for 30 minutes at room temperature; the morphology, sperms count and motility were assessed using WHO\'s Kruger guidelines. For swim-up procedure, each of sperm samples was divided into several separated 0.5 ml volumes and were over-layered with a double volume of medium (Ham\'s F-10, supplemented with human serum albumin) and incubated for 45min at 37ºC in tubes inclined at an angle of 45 degrees. The upper layer containing actively motile sperms was carefully removed and suspended in medium and centrifuged at 600g for 5 min. After discharging the supernatant, the cell pellet was mixed and washed in the medium. After centrifuging at 600g for 5 min and discharging the supernatant, the bottom part was re-suspended in medium (200-250µl) and incubated until the time of insemination. A drop of it was also examined under the light microscope and concentration, motility, and total numbers of motile sperms were redetermined after processing.
Ovarian hyperstimulation was carried out with CC and hMG alone or incombination to achieve a slight increase in number of follicles for fertilization. CC and hMG were given in a dose of 50-100 mg from 3rd to 7th day and 75- 150 units on alternate days of the menstrual cycle, respectively. Transvagianl sonographies were performed to evaluate follicular growth and endometrial thickness on cycle days 10-11.
Ultrasound monitoring was followed by 10000 IU of hCG injection in the stimulated cycles when at least one follicle was > 16 mm in mean diameter. The time of insemination was 36h after hCG administration.
A volume of 0.3-0.4 ml suspension of processed spermatozoa was introduced into the uterine cavity, approximately 0.5 cm below the fundus with a 18mm catheter [Wallace™ artificial insemination catheter (Smiths Medical) AIC18]. After insemination, the women remained supine for 20 min. Progesterone was daily prescribed to support pregnancy.
To confirm initial pregnancy, serum samples were examined 14 days after IUI for progesterone and bhCG levels. When the b hCG was positive, the Clinical pregnancy was defined as the presence of an embryonic or foetal heart by means of ultrasound at 6-8 weeks of gestational age. Live birth rate was also defined as those pregnancies proceeding to deliver a live neonate.
Comparison between variables (maternal age, duration of infertility, preovulatory follicles, endometrial thickness and motile sperms) was performed by Yates corrected chi-square and student\'s t-test using SPSS software, version 10,0for windows. The mean values among groups were compared using a standard analysis of variance. Statistical significance was set at p <0.05.

Our analysis considered 26 patients who had undergone 41 treatment cycles. Baseline characteristics of the patients are summarized in Table-1. 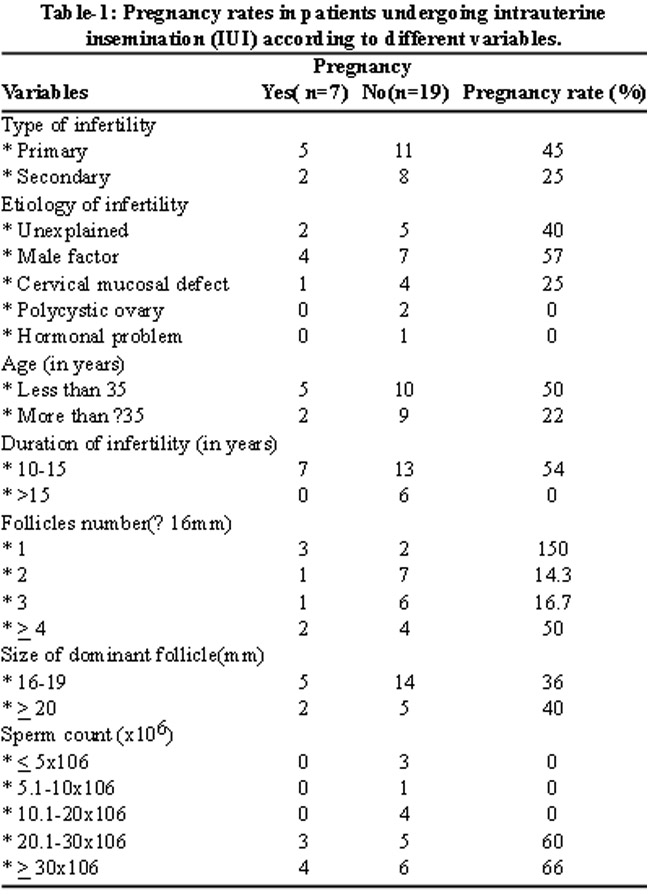 The overall pregnancy rate was 27%; 15% for male factor, 8% for unexplained infertility and 4% for cervical factor. Out of the 7 pregnancies that occurred during the study, six resulted in live births and one in spontaneous abortion. The majority of pregnancies (n=6) were achieved in the first cycle.
The youngest woman in this study was 30 years old and the oldest was 40.

Table-2 gives the age distribution of all the patients. Majority of the women were in age group of< 35 years. The overall pregnancy rate in this group was higher (19.2%) than the rate in age group of > 35 (7.7%). So that, for patients < 35 years old, 5 pregnancies out of 5 cycles occurred, declining to 2 pregnancy out of 3 cycles in 35 and 37 years of age, however no pregnancy occurred in women with age of 38 years and more. There was a statistically significant difference (p<0.03) between the mean (±SD) age of the patients who became pregnant and those who did not.
Our results showed that infertility duration of over 10 years does not significantly affect pregnancy rate between pregnant and non-pregnant women (12.43±0.752 vs.14.32 ± 0.834).
The pregnancy rate did not have any significant relationship with numbers and size of follicles (> 16mm) among pregnant and non-pregnant women. Overall pregnancy rates were 11.5% for one preovulatory follicle, 3.8% for two and three follicles and 7.7% for ? four.
Mean (±SD) endometrial thickness in the day of hCG administration was 8.257±0.840 in the pregnant women and 7.695±1.679in non-pregnant women. There was no significant difference between the two groups with respect to endometrial thickness.
An analysis of the sperms count, morphology and motility as variables showed that in all semen specimens, the variables were obviously improved after the swim-up procedure. The association between conception and sperms characteristics was examined. The mean number (±SD) of motile sperms inseminated was higher in pregnant women than in non-pregnant (p=0.05).

In this study a count of inseminated high motile spermatozoa and age of women were the variables that affected pregnancy rates of infertile women with infertility of more than 10 years.
The overall pregnancy rate in our investigation was 27%, while the reported pregnancy rates for infertile women with infertility less than 10 years achieved by IUI have widely varied between 2.7%-66%.10 These variances may be due to different methods of insemination and differences in affective factors11 between our study and others .
We found that the majority of pregnancies happened among the patients< 35 years of age and in the first treatment cycle. The success of IUI also declined with increase of patient age, which is in congruity with other reports.7,9 Although, in this regard some studies have not reported relationship.5,6 The age-related decline in female fertility has been well documented in every aspect of natural and artificial reproduction techniques and predominantly in women undergoing IUI.12 This decline in success in probably due to a combination of progressive follicular depletion, decline in granulose function poor occyte quality,13 reduced endometrial receptivity,14 higher rate of chromosomal abnormalities,15 increase in frequency of anovulatory cycles after age 40, aging of the reproductive tract and diseases of the reproductive tract. 16 In addition, the success of 30-34 years old women is rather high.17
Although, there are reports indicating that duration of infertility is an independent factor to predict clinical pregnancy18 and a decreased pregnancy rate is associated with longer infertility,5 we determined, as in other studies,19 that the infertility duration had no effect on the pregnancy rate. Indeed most of studies compared the pregnancy rates with infertility duration of 5 years or less.20
In our study the number and diameter of follicles were not significantly associated with IUI outcome. This is in contrast with results of Gilberto lberico et al,5 and Erdem et al,18 who reported that the preovulatory follicles are predictors of pregnancy and dominant follicles before hCG are significant independent factors to predict live birth. Similarly, cycles with a single pre-ovulatory follicle have also shown poor results.21
A lack of agreement exists among trained fertility specialists with regards to the endometrial thickness to be as a predictor of IUI treatment success.6,7,22,23 Similar to previous reports22,23 this variable was not a significant factor and it was below a threshold thickness in non-pregnant women. Although a recent study documented some significant differences in pregnancy rates above and below a threshold thickness of 8-10mm.24
In concord with the results published by Khalil et al,25 the number of inseminated motile sperms was a significant variable on the outcome of IUI treatment, although other studies failed to find such as a relationship.9 Many of these controversies may stem from differences in a lack of standard criteria for semen analysis, like variations in the method of semen preparation for insemination, non-uniform reporting of semen characteristics,23 presence of other favorable factors such as a multifollicular response, duration of infertility,5 thereby making it difficult to compare IUI results in detail.
In conclusion, the results of this study show that the number of motile spermatozoa and women age are factors with the highest impact on the chance of pregnancy after IUI treatment among women with infertility of over 10 years duration.