Objective: To determine the health risk factors associated with Afghan refugee mothers compared to Pakistani mothers.
Method: A total of 1039 records of newborn and their mothers collected prospectively from the four public-hospitals in Peshawar during August-November 2003 were analysed, using crude and adjusted odds ratios for the comparison.
Results: The data revealed that low birthweight was 2.6 times higher in Afghan refugees compared to Pakistani mothers adjusting for all other important covariates. The univariate analysis highlighted a number of factors, however, the multivariate method established significant association of Afghan refugees with Tribal areas, older age and an un-registered pregnancy compared to Pakistani mothers.
Conclusions: High geo-demographic risk factors were seen in Afghan refugee mothers; for which an appropriate strategy is required to provide reasonable healthcare facilities in the Tribal areas, and disseminate information regarding the risks involved in non-registration and old age pregnancies.
Keywords: Afghan refugees, Ethnicity, Maternal health, New born health (JPMA 61:161; 2011).

Ethnicity is a risk factor which is associated with maternal and newborn health even in developed countries where adequate health facilities are available for all. However, the difference in health is more visible in the developing countries, especially in the refugee camps.1
Studies in the developed countries have associated ethnicity with poor neonatal and newborn health through factors such as maternal physical health, health awareness and maternal social status/education.2-4 Research has also shown "ethnic differences in foetal growth, which to a large extent may be attributed to differences in maternal weight, height, age and parity".5
It has also been observed that the weight of the newborn of the immigrants from the Indian-subcontinent in the UK is declining from generation to generation.3 Similarly, in a community-based study in England and Wales, postneonatal mortality was reported to be significantly higher for Pakistani mothers against mothers belonging to Caribbean, United Kingdom and Republic of Ireland.6
In a large study of refugee camps Hynes et al reported that majority of the refugee camps had lower percentages of LBWs than in the country of their origin, but higher than those in the host country.7 However, evidence regarding LBW in the camps compared to the host country is not consistent and may vary from country to country depending upon the availability of health care, food and nutrition.7
Bartlett et al1 reported a high ratio of maternal deaths and a life time risk of death in Afghan-refugee camps as compared to Pakistani mothers\' of which nearly 70% were preventable. The limited mobility of the refugee mothers was found to be one of the leading causes of inadequate access to health care resources and adverse maternal health (e.g. haemorrhage, sepsis and induced hypertension and anaemia).
Maternal health of refugee mothers living in camps,8,9 conflict areas10 or settled in developed countries11 is one of the issues needing special attention and intervention.
In a situation, where sufficient health care facilities are not available, maternal and newborn health of the poor refugees is expected to be at higher risk compared to the host population.1,7,12 A previous study8 found that Afghan refugee mothers are at higher risk of low birthweight; however, little is known about the various risk factors associated with the Afghan refugee mothers.12 The present study investigated the nature and range of risk factors associated with maternal health in the Afghan refugee compared to Pakistani mothers in order to inform the healthcare policy makers.

The data used in this study was collected in a cross-sectional prospective survey by a structured questionnaire and information recorded included maternal geo-demographic, maternal physical health and pregnancy history factors including pregnancy outcomes from the four public-hospitals in Peshawar (Hayatabad Medical Complex, Khyber Teaching Hospital, Lady Reading Hospital and Government Maternity Hospital, Peshawar) with the help of clinicians on duty.
A total of 1039 mothers were recruited during August to November 2003 with the help of clinicians on duty, and the data were analysed using univariate and multivariate methods through SPSS (version 15). The detailed methodology and ethical approval of the study has been elaborated in another publication.12

The results were from 1039 mothers\' record collected prospectively from the four public-hospitals in Peshawar. The proportions of mothers in the two groups were found to be nearly 12% and 88%, respectively in Afghan refugees and Pakistani mothers. The univariate analysis showed the majority of Afghan refugee mothers were based in Tribal areas (OR= 2.5, p<0.01), non-fresh water localities (OR= 1.7, p<0.01), belonged to low income families (OR= 1.9, p<0.01), old age mothers (OR=3.66, p<0.01) and highly associated with illiterate husbands (OR=1.71, p<0.01) compared to Pakistani mothers (Table). Similarly, the odds of abortion/miscarriages and short inter-pregnancy interval was also significantly higher in Afghan refugee mothers compared to Pakistani mothers (OR=1.56, 1.73, p<0.05), respectively.
In contrast, the proportion of diabetic and hypertensive mothers, and mothers with short stature were significantly low in Afghan refugees mothers (OR=0.278, 0.548, p<0.05; and 0.485, p<0.01) respectively, compared to Pakistani mothers.
However, the practice of consanguinity, proportion of maternal education, short gestation, anaemic-status of the mothers, other health risk factors, maternal weight at the time of delivery and body mass index were not significantly different in the two groups of mothers (Table). 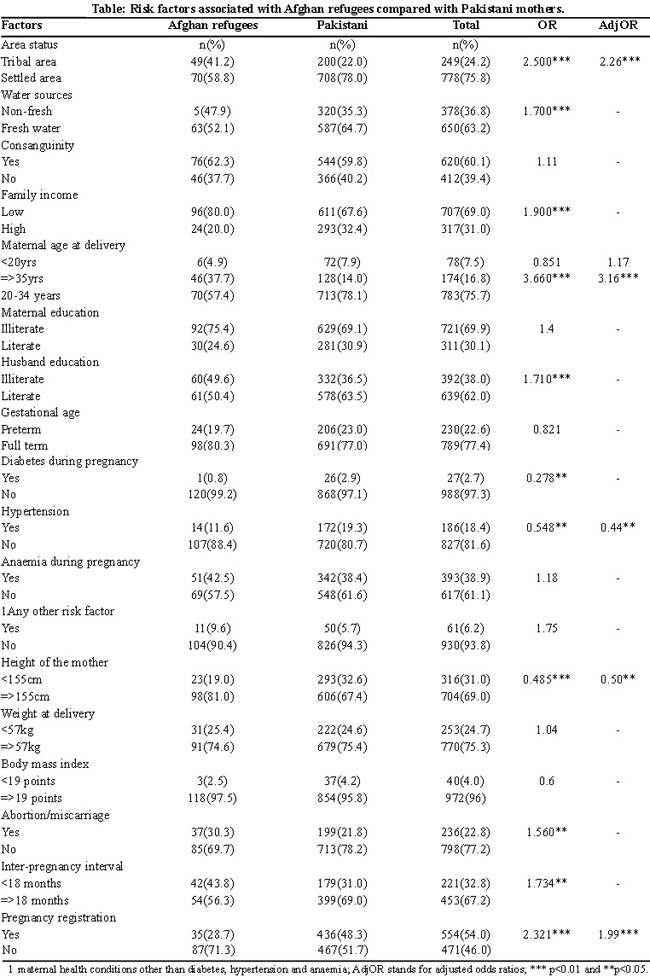 This study was conducted in public hospitals, where only 9-10% of the total deliveries take place.9,13 Owing to time, resource and socio-cultural constraints, this study recruited patients prospectively from the four main public hospitals in Peshawar. Hence, the findings of this study may not be applicable to mothers other than public hospitals. Furthermore, 80% of the Afghan refugee mothers were from low income group, hence the findings of this study may be used only in the context of relevant situations.
The exact information regarding induced and spontaneous abortions including prenatal care was difficult to ascertain, due to socio-cultural reasons. Therefore, abortion/miscarriage was used for any pregnancy loss (induced and spontaneous abortion), and pregnancy registration in the hospital as a proxy for prenatal care,12 in this study. Although, pregnancy loss and registration might not be perfect indicators, yet they give meaningful clues towards understanding the problems under investigation. Further studies are however required to carryout detailed investigation on these issues.
The sample used in this study, confirms the findings of earlier studies in Pakistan regarding the proportion of non-fresh water areas, low family income, maternal and husband education, consanguinity and, diabetes, hypertension, anaemia and abortions.12
An earlier study on this data set demonstrated that Afghan refugee mothers were at increased risk of low birthweight babies adjusted for other important factors compared to Pakistani mothers in Peshawar.12 The present study further found that, the variation in outcomes might be due to a number of dissimilarities in the two groups of mothers studied. The main discrepancy between Afghan refugee and Pakistani mothers were area of residence, maternal age and pregnancy registration.
The proportion of Afghan refugee mothers were more than twice in Tribal areas compared to the settled areas (Table). Therefore, the residential status might be one of the main factors associated with Afghan refugees and hence the adverse pregnancy outcome due to health condition, i.e. anaemia.12 These findings are consistent with a number of studies done in India, Bangladesh and Pakistan,14,15 where the effect of residential areas on pregnancy outcomes has been documented.
In line with studies on maternal health and outcomes on refugees in Hong Kong,16 Bosnia, Herzegovina and Serbia,17 where area of residence was one of the main causes of adverse pregnancy outcomes, our study also finds the same association.
However, it is also possible that the adverse outcomes in Afghan refugee mothers compared to local Pakistani mothers could be due to mental health problems.18 The proportion of mental health problems is reported to be highest in the Tribal areas of Pakistan,19 which is believed to be associated with adverse pregnancy outcomes.18 Further, studies are recommended for in-depth investigation to explore the relationship between the locus of refugee\'s residence and maternal and newborn health.
Studies have associated old age mothers with low birthweight in Dhaka-Bangladesh,20 stillbirth, hypertension and diabetes in Paris,21 low birthweight, macrosomic-babies and caesarean section in Austria22 adjusted for other important covariates. Similarly, many studies have also shown that, older mothers are at increased risk of intra-uterine growth retardation (IUGR), after controlling for other associated factors.21-23 In Pakistan Labour Force and Migration Survey of 1979 confirmed that children of the youngest and oldest mothers experienced the highest rates of infant mortality.24 In our sample, the higher proportion of old age mothers in the case of Afghan refugees might be one of the main causes of adverse pregnancy outcomes compared to Pakistani mothers. Further, studies should focus on old age mothers and especially why Afghan mothers continue conception in the old age compared to Pakistani mothers.
"Better care for mothers and babies before and after birth would address the challenge of one third of these deaths that occur in the first day of life".25 Our data set shows that pregnancy registration is significantly low for Afghan refugees, which might be one of the main reasons of maternal health and adverse pregnancy outcomes. The finding is consistent with that of another study on Afghan refugee mothers in the camps at Tribal areas.1 Health awareness programmes regarding pregnancy registration and providing adequate healthcare facilities for Afghan refugee mothers are recommended to increase pregnancy registration and minimize maternal health conditions and hence adverse pregnancy outcomes.

The study finds significant variation among the two groups of mothers with specific combinations of geo-demographic factors, maternal physical health and health condition. It highlights that Afghan refugee mothers are at a disadvantage regarding their accommodation in Tribal areas, more likely to continue conception after the age of 34 years and less likely to register pregnancies compared to Pakistani mothers. Further studies are recommended to explore specific maternal health risk factors in Tribal areas, causes of old age pregnancies and reasons for non-registering pregnancies for Afghan refugees compared to Pakistani mothers in this region.