Objectives: To study the safety and short and intermediate term efficacy of drug-eluting balloon (DEB) in the treatment of de-novo and in-stent restenotic coronary artery disease (CAD).
Methods: Of the total 100 patients so far enrolled in a prospective DEB registry using a Paclitaxel-coated balloon at our hospital, 36 patients were studied for short and intermediate term i.e. 12 months outcomes. All patients with symptomatic coronary artery disease (CAD) including de-novo lesions or in-stent restenosis (ISR) requiring percutaneous intervention (PCI) with a DEB were included. Clinical follow-up was conducted at 3, 6 and 12 months. Primary outcome was a composite of major adverse cardiac events (MACE).
Results: Procedural success was achieved in all (100%) patients. Mean age was 53.2 ± 12 years, 61.1% presented with acute coronary syndrome (ACS) and 47.2% had triple vessel CAD. Sixty six percent were classified as having ACC/AHA B-2 or C type coronary arteries including 22.2% with bifurcation lesions. DEB intervention for de-novo CAD was done in 77.7% patients and 22.2% for ISR. All de-novo lesions required a bare- metal stent (BMS) after DEB dilatation. Mean DEB diameter was 2.73 ± 0.06 mm and mean length was 19.58 ± 0.81 mm. Coronary dissections occurred in 5 patients which were successfully treated with additional stents. At 3 (n=36), 6 (n=31)and 12(n=31) months follow-up, no MACE was observed in any patient.
Conclusion: The short and intermediate term outcomes from this prospective DEB registry showed excellent results with 0% target lesion revascularization (TLR) for both de-novo and ISR lesions.
Keywords: Drug-eluting balloon, in-stent retenosis, paclitaxel, coronary artery disease (JPMA 61:157; 2011).

Coronary stents have significantly improved the outcome in percutaneous coronary interventions (PCI) by virtually eliminating the immediate recoil and significantly reducing the restenosis after balloon angioplasty (BA).1,2 However the long term efficacy of bare metal stents (BMS) is limited due to in-stent restenosis (ISR) ranging from 5-35%.3 Drug eluting stents (DES) have dramatically reduced the short term i.e. 6 months rates of ISR.4 The long term i.e. 2-3 years rates of ISR and target lesion revascularization (TLR) range from 4-7%.5,6
PCI for ISR poses significant challenges. The options are balloon angioplasty (BA) or restenting with either BMS or DES. BA or stenting with BMS in this challenging group has shown significant restenosis rates (39 % and 38 % respectively).7 While using DES for BMS ISR has been associated with less restenosis rates i.e.13-20% for Sirolimus eluting stent (Cypher, Cordis J& J) and 15-22% for Paclitaxel eluting stent (Taxus, Boston Scientific).8-10 PCI using another DES for initial DES ISR has been shown to significantly increase restenosis and major adverse cardiac events (MACE).11-14
An important limitation of DES is the fact that the drug is only concentrated at the stent struts, thereby reducing the ability to suppress neointimal hyperplasia between the stent struts and at the stent margins. The long term biological effects of the polymers used to bind the drug are also of significant concern.
In order to overcome these structural limitations of DES, a recent innovation has been the drug eluting balloon (DEB) which distributes the drug more evenly on the vessel surface than that coated on a DES. In addition, using a DEB obviates the need for another layer of metal in ISR cases. A few small scale studies have reported excellent immediate and short term results of DEB use compared to non-coated balloon for denovo and ISR lesions.15,16 The largest study comparing DEB to DES for DES ISR is the PEPCAD II-ISR study which reported one year results showing 6.3% TLR in the DEB group vs. 16.7 % in the DES group.17 No published data exists on using DEB in real-life scenario for all comers.
We present the first short and intermediate term results for DEB use in Pakistan.

We prospectively enrolled all patients undergoing PCI using DEB in our ongoing DEB registry. A total of 100 patients have so far been enrolled in this registery. Only those pateints who had twelve month post procedure clinical follow-up available were included in the current study. The present study sample consists of 36 patients who underwent a DEB procedure for either denovo coronary artery disease (CAD) defined as 70% or more lumen diameter stenosis of native coronary artery or ISR defined as 50% or more lumen diameter stenosis. Baseline clinical characteristics were recorded for all patients. Standard definitions (ACC/AHA) for acute coronary syndrome (ACS) were used. All PCI procedures were performed via the femoral approach using 6-french sheaths and guiding catheters. All patients received a 600 mg oral loading dose of Clopidogrel and 75 mg of Aspirin before the procedure and then placed on Aspirin 75 mg/day indefinitely and Clopidogrel 75 mg twice a day for one month and then daily for an additional one year.. Unfractionated heparin was given at 70-100U/kg IV bolus. Glycoprotein IIb/IIIa receptor blockers were used at the operators discretion. Detailed description of PCI procedures was recorded on prespecified proformas. Paclitaxel coated balloons (SeQuent Please, B-Braun, Malsungen AG Germany) ranging in diameter from 2.5-3.0 mm and 15 mm to 30 mm in length utilizing a 1:1 balloon to artery ratio were used. The balloon is coated with 3 micrograms/mm2 Paclitaxel in a rapidly bioabsorbable matrix which adheres to the vessel wall and facilitates drug release. The balloon was left inflated for a minimum of 30 seconds as recommended by the manufacturer. Coronary arteries were classified according to standard ACC/AHA classification using quantitative coronary angiography (QCA). We defined coronary bifurcation categories according to the Medina classification.18 Both immediate and short term results and complications including minor (not requiring transfusion) or major (requiring transfusion) bleeding, dissections, abrupt closures, requirement for additional stents etc. were recorded. Patients were followed clinically at 3, 6 and 12 months. Five patients were lost to follow-up after their 6 month follow-up. Primary outcome was defined as a composite of major adverse cardiovascular events (MACE) defined as myocardial infarction (MI), target-lesion revascularization (TLR) and death. Statistical analysis was carried out using SPSS v.12 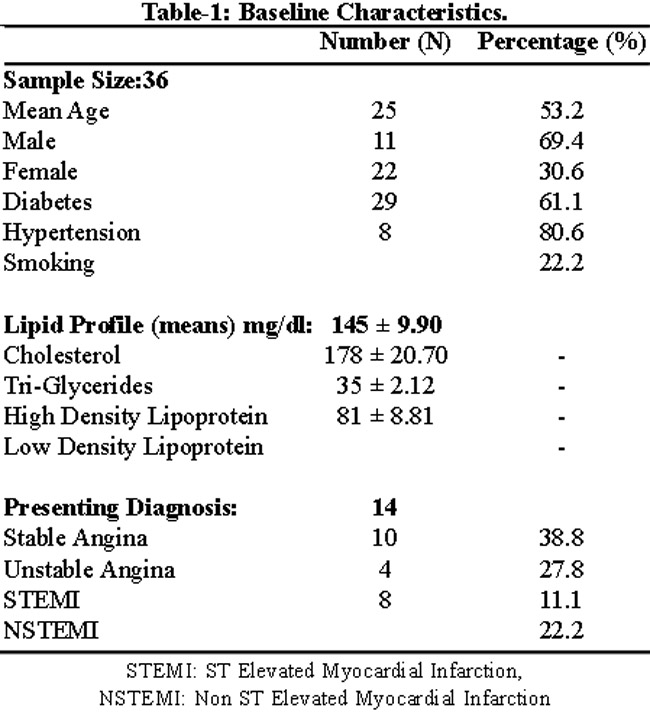 Table-1 shows the baseline clinical characteristics of the study sample. The mean age was 53.8 ± 12 years with majority (69.4%) being males. This was a high risk cohort with a significant percentage i.e. 61.1% and 80.6% being diabetic and hypertensive respectively. More than a third (44.1%) had two risk factors. Interestingly, as compared to males, 90% of the females were diabetics and 100% were hypertensive. Elevated LDL was not seen to be a problem in this cohort.
More than half (61.1%) of the patients presented with acute coronary syndromes (ACS) including unstable angina (UA), non-ST-elevation myocardial infarction (NSTEMI), and ST-elevation myocardial infarction (STEMI).
The angiographic characteristics are shown in Table-2.

Nearly half (47.2%) of the patients had triple vessel CAD with an additional third having double vessel CAD. Of the diabetic and hypertensive patients, 65% and 55.6% respectively had triple vessel CAD. Left anterior descending artery (LAD) and right coronary artery (RCA) were the most frequently involved vessels (31.7% and 41.4% respectively). The stenosis of the Left Circumflex artery (LCX) was 77.54%, 71.86% for RCA and the LAD had the highest mean stenosis of 80.38%. More than half (58.3%) of the intervened locations involved the ostial and/or proximal segment of the artery. Twenty eight (77.8%) patients had DEB intervention of a de-novo coronary artery stenosis and 8 (22.2%) for in-stent restenosis. More than two thirds of the patients (66.6%) were classified as having B-2 and C type vessels. Of the intervened vessels, 8 (22.2%) were bifurcating lesions which were treated with DEB with 50% of them having complex configuration. Pre-dilatation with a non-drug-eluting balloon was performed in 21 (58.3%) patients. All patients with a de-novo stenosis treated with a DEB also received a BMS. One patient required an additional stent for dissection. Of the 8 ISR cases, 4 patients were treated with only DEB and the other 4 required additional stents to treat proximal or distal edge dissections.
No patient developed any minor or major bleeding and complications like abrupt closure or perforation requiring emergent bypass surgery. On 3 month clinical follow-up, none of the patients (N=36) had developed any of the prespecified MACE, while 6 and 12 month clinical follow up of 31 patients revealed similar results(N= 36).

The last two decades have seen major innovations in the treatment of coronary artery stenosis in the shape of coronary stents. But with this technological advantage came the problem of ISR. When drug-eluting stents (DES) were introduced a few years ago, they dramatically reduced the incidence of ISR for de-novo CAD, but did not eliminate the problem of ISR. ISR of DES posed the most challenging clinical entity for interventional cardiology. The initial results with balloon angioplasty (BA) and rotational atherectomy were very poor with high rates of 6 month restenosis (51% to 65% respectively).19,20 Then came intracoronary brachytherapy, which despite favourable initial results, proved too cumbersome and with new complication like \'edge effect\' of the procedure itself.21 The late 1990\'s witnessed the gradual fading away of brachytherapy as a viable option for ISR. While ISR of BMS was treated with favourable results using DES, ISR of DES, even if treated with another DES of a different type, has been associated with restenosis rates in double digits.12 The presence of an additional layer of metal likely plays a significant role in this phenomenon. In addition, the long term risks of permanent polymers, which are used for controlled release of the anti-proliferative drugs, are also of significant concern as is the need for prolonged dual anti-platelet therapy (APT).
These concerns have lead to the development of a novel drug-eluting balloon (DEB) for ISR cases. DEB technology offers a significant advantage of a uniform coating of anti-proliferative drug as compared to DES where the drug is present only over the stent struts leaving the intervening spaces without the drug and thereby leading to restenosis. In addition, by eliminating the presence of an additional layer of metal as well as the permanent polymers, drug-eluting balloons present additional benefits. After promising initial animal studies, DEB\'s have been used in several trials with excellent six months results showing restenosis rates of 5.5% in de-novo small vessels and 6.3% in ISR lesions.17,22 These studies have also shown 0 % incidence of late thrombosis, which remains a serious concern with using a DES for initial BMS or DES ISR. Using DEB has also eliminated the need for prolonged i.e. one year or more dual APT with its inherent increased bleeding risk.
We are presenting, for the first time in Pakistan, the immediate and short term results of a prospective DEB registry. As shown in the results section, this was clearly a very high risk cohort, both from clinical and anatomic perspective. Yet these outcomes show the positive potential for using DEB both for de-novo lesions as well as ISR cases, though the number of ISR cases was small in this study. Since drug-eluting stents have been in use in Pakistan since 2002, it is likely that we will see an increasing number of ISR cases in the years to come. DEB technology offers another viable PCI option as compared to coronary bypass surgery (CABG) for this complex patient subgroup. Some technical details need to be considered by the operators using DEB. The most important one is to appropriately match the length of the DEB to that of the lesion in de-novo cases, and to use a BMS of equal or smaller length if BA is not considered adequate. Using longer bare-metal stents than the preceding DEB will leave coronary segments which have not been treated with a DEB and in turn will limit the advantage of using a DEB. The second issue is to be diligent about edge dissections which must be adequately covered with the subsequent BMS, again limiting the non-DEB treated segment to as minimum as possible. We plan to follow all patients in this ongoing registry to evaluate the long term results of using DEB for de-novo lesions and ISR cases. Further larger scale studies are needed before drug-eluting balloons can be recommended for routine initial use in all cases, as an alternate approach to using drug-eluting stents.