Objective: To determine the safety of insulin tolerance test (ITT) for assessing growth hormone (GH) deficiency in children.
Methods: This hospital based study was conducted at the National Institute of Child Health, Karachi from 1st November 2008 till 30th October 2009. All children suspected of growth hormone deficiency, were included after excluding all other causes of short stature. Verbal informed consent was taken from the parents. Children less than 2 years of age, weighing less than 10 kg, untreated/ inadequately treated hypothyroidism or Addison\'s disease, epilepsy, having history of hypoglycaemic fits or cardiac disease were excluded. All children were subjected to the international standard protocol of ITT and their samples of growth hormone and blood sugars were drawn. Complications during the procedure like hypoglycaemia, hypothermia, loss of consciousness, fits, vomiting and failure to achieve hypoglycaemia were recorded. Insulin tolerance test was performed on a total of 168 subjects. The data was entered in SPSS version 17 for analysis.
Results: A total of 168 children were subjected to the ITT. Four of them were abandoned as they could not achieve hypoglycaemia despite repeating the dose of insulin. Results were analyzed on 164 children whose mean age was 10 ± 3.5 years. There were 96 (58%) males and 68(41%) females. Over all 79.8% children achieved hypoglycaemia. None of the subjects developed any complication (fits, loss of consciousness,) or required intravenous glucose during the test and it was completed in all children with close monitoring. The results showed that there was a significant effect of time after insulin administration on both the blood glucose level (BG) and growth hormone (GH) levels. The blood glucose level decreased rapidly after administration of insulin and was lowest 30 minutes after injection and showed an increasing trend in subsequent readings, becoming almost equal to the baseline value 120 min after injection. From the study group 111 (66%) children were diagnosed as having growth hormone deficiency, 52 (31.3%) were normal and 1(0.6%) had growth hormone insensitivity.
Conclusion: ITT in children was found to be a safe and reliable test but can be potentially dangerous and requires very close monitoring and supervision and should be performed in a center with experienced staff.
Keywords: Insulin tolerance test, hypoglycaemia, growth hormone deficiency (JPMA 61:153; 2011).

A total of 168 children were subjected to the ITT. Four of them were abandoned as they could not achieve hypoglycaemia despite repeating the dose of insulin. In 26 (15.8%) children the dose of insulin had to be repeated. Results were analyzed on 164 children, five (3%) of them had blood sugar level of <45 at baseline and they were not given insulin. Blood glucose and GH levels in these children were monitored at regular intervals without insulin administration. In the remaining 159 children, blood glucose and GH levels were monitored every 30 minutes after insulin injection.
Mean age of the subjects was 10 ± 3.5 years. There were 96 (58%) males and 68(41%) females. Overall 131 (79.8%) children developed hypoglycaemia (<45 mg/dl). Maximum number of children (35%) developed hypoglycaemia at 30 min and the percentage of children developing hypoglycaemia decreased in subsequent readings at 60, 90 and 120 minutes (Table).

Seven (4.2%) children developed clinical hypoglycaemia and had sweating and malaise although their blood glucose reading on glucometer was above 45mg/dL.
Children were closely monitored for complications. None developed significant complications of hypoglycaemia such as seizures, loss of consciousness/drowsiness or hypothermia <35ºC and the test was completed in all subjects with close monitoring. None of the children required intravenous glucose after developing hypoglycaemia or had tremors/tachycardia during the test. The test was successfully completed in all children with no serious side effect and after 4 hours of observation they were sent home.
Using repeated measures ANOVA, for the growth hormone levels and blood sugar, showed that there was a significant effect of time after insulin administration on both the blood glucose and growth hormone levels. There was a significant difference between blood glucose at baseline and the subsequent three values of blood glucose (BG) at 30, 60 and 90 minutes (BG2, BG3 and BG4) recorded. There was no significant difference between baseline blood glucose and BG 5 (at 120 min) (Figure-1). 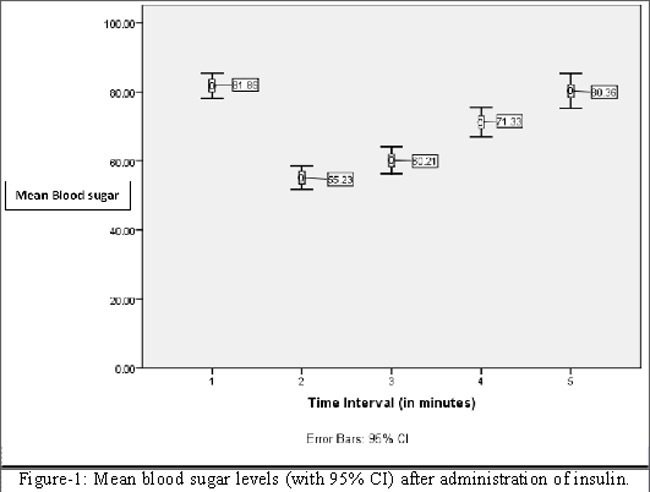 The blood glucose level decreased rapidly after administration of insulin and was lowest 30 minutes after injection and showed an increasing trend in subsequent readings, becoming equal to the baseline value 120 min after injection. The values of growth hormone were maximum 30 and 60 min after administration of insulin, coinciding with the peak of hypoglycaemia. The value of growth hormone almost reached its baseline value 120 minutes after insulin injection (Figure-2). 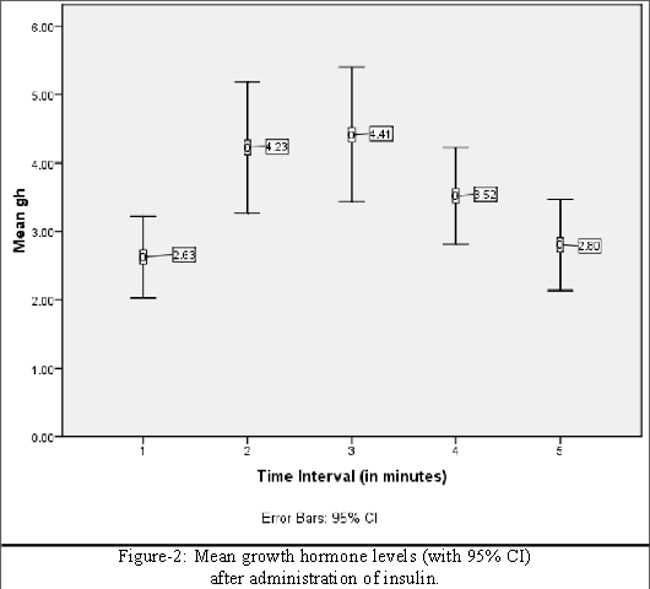 The insulin tolerance test is a very specialized test which can only be performed in centers with trained personal and fully equipped to deal with any untoward incident. In our country arginine and clonidine are not available for diagnosing growth hormone deficiency and L Dopa is not commonly performed; ITT is an important and valuable test for diagnosing growth hormone deficiency but is not frequently performed and very few centers are performing it currently. Studies have shown ITT to have good diagnostic yield when compared with other studies but can lead to complications if not performed by trained staff. Our study has also shown it to have good diagnostic value as almost all children achieved hypoglycaemia and no side effects were encountered.
Growth hormone is a prolonged and quite expensive treatment with the distress of a daily injection; therefore definitive diagnosis of growth hormone deficiency is very important.10 Studies regarding safety or documenting any adverse effects of the ITT are limited in children; but a better precision of ITT for diagnosing growth hormone deficiency has been reported. It is still being used as a definitive test in many centers over the world but some centers perform at least two different tests before confirming growth hormone deficiency. In this study we tried to document carefully any serious complications occurring during the test due to low blood glucose and except sweating and hunger none of the children experienced any other symptoms. Side effects with ITT are very rare, not even documented in the elderly also. There had been some reports related to fatalities of ITT but this was due to high concentrations of glucose given to correct glucose.11 However, inducing hypoglycaemia with intravenous insulin must always be seen as potentially dangerous and so very cautious patient selection by excluding those with seizure disorders or those with significant cardiac disease is mandatory.12,13
Very limited studies regarding the safety of ITT are available and fortunately in our study, no complications were observed. A similar conclusion has also been made by Galloway who reviewed his data of ITT in a large sample of 550 children over a ten year period and documented no serious adverse effects.5
A recent local study reviewing cost effectiveness of the samples of growth hormone during the ITT reported a cost effectiveness of 29 % if the 120 minute sample was not considered and they concluded that the 0 till 90 minute samples were sufficient to diagnose GH deficiency.[9] In our study group we found that almost 8% children achieved hypoglycaemia at 120 minutes and they would have been missed had the 120 minute sample been abandoned. Probably larger studies from different centers on this aspect would help to prove this and reach to a conclusion as it is very difficult to subject a child to ITT and then also not reach a definitive diagnosis.
ITT is therefore a safe test if performed in a center fully equipped and with experienced staff.

ITT was found to be a safe and reliable test if performed appropriately following a standard protocol with strict monitoring for side effects. It needs to be conducted in a center with expertise, staff and equipment to treat any serious problem encountered.