Outcome of dual infusion through irrigating chopper in conventional phacoemulsification

Objective: To determine the operative advantage in terms of minimizing the complications following conventional phaco surgery with dual infusion through irrigating chopper.
Methods: A Randomized Controlled Clinical Trial (RCCT) was conducted in the Ophthalmology Unit-III, Sindh Government Lyari General Hospital and DUHS and Al-Noor Eye Hospital Karachi, from March 2008 to February 2009.
A total of 200 eyes with nuclear/cortico-nuclear cataract on Lens Opacity Classification System III underwent phacoemulsification. In all 100 eyes in group A were randomized to have conventional phacoemulsification with dual infusion technique through irrigating chopper and another 100 eyes in group B by conventional phaco surgery. Outcomes in two groups were judged by amount of Ringer\'s Lactate used, stability of anterior chamber and number of complications observed.
Results: Rate of intra-operative complications was lower in group A as compared to group B (p=0.002). Anterior chamber depth was maintained in all cases of group A while it collapsed in 9 cases of group B which was highly significant (p=0.003). Mean amount of Ringer\'s Lactate used in group A was 260.2 ± 55.07 ml and 195.8 ± 35.0 ml in group B, which was significantly high (p<0.001).
Conclusion: Dual infusion through irrigating chopper serves triple function of irrigation, chopping and additional separate distant infusion. It improves anterior chamber stability and compensates surge and operative advantage to surgeon.
Keywords: Dual infusion, irrigating chopper, stability of anterior chamber and amount of Ringer\'s Lactate (JPMA 61:145; 2011).

Successful cataract surgery is determined in terms of quicker and safer visual and functional recovery, which is closely related to the size of the wound.1 Visual outcome continues to improve as small incision surgery evolves, with phacoemulsification emerging as the most popular technique.2 Towards this end, micro incision cataract surgery (MICS) is now becoming popular,3 which requires "naked" phaco needle without irrigating sleeve. This leads to increased wound burn, which is addressed by "cold" phacoemulsification.4 Alternate small incision techniques introduced from time to time which include constricting wire loop technique by Keener,5 phacosandwitch technique of Fry, 6 and phacosection technique proposed by Peter Kansas,7 could not draw more attention from cataract surgeons. Kratz8 has revolutionized the non-phaco manual small incision cataract surgery (MSICS) by introducing sclerocorneal pocket tunnel incision.
Phaco surgery is done in "closed" chamber. In traditional phacoemulsification, sometimes there is a shallow anterior chamber and wound burn. If wound leaks either from main incision or from side ports, anterior chamber collapses, while in a tight wound there is a danger of corneal burn. In hard nucleus, sometimes the surgeon keeps the wound leaking to avoid incision burn but this leads to a shallow chamber.
Various methods were employed to maintain adequate anterior chamber depth and still few are under trial. Ophthalmic viscosurgical devices (OVDs) are frequently used to maintain anterior chamber depth as well as coating of corneal endothelial surface thus protecting endothelium during cataract surgery.9 Conversely, some OVDs increase thermal damage causing endothelial cell loss.10 OVDs may also cause increase in intraocular pressure (IOP) and inflammation in the immediate postoperative period, which may cause further endothelial cell loss.11
Attempts were made to maintain anterior chamber depth by adjusting height of irrigating bottle. Using Benchimol\'s high infusion technique with different bottle heights, the surgeon can control the infusion and ultimately very deep stable anterior chamber is maintained. Due to high pressure, good viscoelastic is required to avoid endothelial damage and iris prolapse. In 1987, the novel innovation of anterior chamber maintainer (ACM) by Blumenthal12 has permitted a high pressure and high flow system, providing a physiological environment throughout the surgery. The ACM is a hollow steel tube with a 0.9 mm outer diameter and 0.65mm inner diameter.13
Using irrigating chopper in traditional phaco has added a very good tool to overcome the collapse of anterior chamber without insulting ocular tissues by extra ports. Here the additional infusion flows through irrigating chopper. In this dual infusion phaco technique, distant irrigation flow directs the nuclear fragments to phaco tip. This infusion also pushes the posterior capsule away and creates a space for maneuverability. Dual infusion by irrigating chopper prevents anterior chamber collapse and thereby prevents endothelial damage.
To the best of our knowledge, there is no such clinical trial of conventional phaco with dual infusion available in Pakistan. The purpose of this study is to determine the effects in terms of minimizing the complications following conventional phaco surgery with dual infusion through irrigating chopper.

This prospective randomized clinical control trial included 200 eyes of 190 patients, which were subjected to phacoemulsification surgery for cataract between March 2008 and February 2009, at Ophthalmology unit III, Sindh Government Lyari General Hospital, Dow University of Health Sciences and Al-Noor Eye Hospital Karachi.
Comprehensive data of each patient was recorded and written consent obtained after explaining surgical procedure and possible results and consequences. Patients were selected from either gender of age between 40 to 75 years having nuclear/cortico-nuclear cataract of grade II to IV according to Lens Opacity Classification System (LOCS) III.14 Patients were randomly divided into two groups comprising 100 eyes in each group. Patients in group A underwent conventional phaco with dual infusion technique while group B patients underwent conventional phaco technique. Patients with myopia up to -6.0 D and hypermetropia up to +5.0 D were also included in the study. Patients having corneal and vitreo-retinal pathology, glaucoma, traumatic cataract, cataract with posterior synechiae and eyes with previous intraocular surgery were excluded from the study.
The principal author performed all cataract extractions by conventional phacoemulsification with 3.2 mm sclero-corneal incision between 11\'O clock position and side port with 150 knives at 2\'O clock position. The anterior chamber was filled with visco elastic methylcellulose and continuous curvilinear capsulorrhexis was followed by hydro-dissection and hydro-delineation. Only amendment made in conventional phaco in group A was an irrigating chopper connected with extra infusion of Ringer\'s lactate through side port. Continuous phaco mode were set in all cases with bottle height of 60 cm, vacuum at phaco stage I was between 30 to 50 mmHg and between 300 to 350 mmHg at phaco stage II. Effective phaco time (EPT) was maintained between 30 to 200 seconds.
All surgical events were noted carefully and subsequent amendments made to meet efficient results. Follow up examination was strictly monitored.
Data were analyzed by SPSS version 15.0. All continuous response variables like quantity of Ringer\'s lactate were presented by mean ± SD and student\'s t-test was applied. Qualitative response variables like age groups, cataract grading, and intra-operative and post-operative complications were presented by frequencies and compared through chi-square test between two groups. If p-value was ? 0.05, then the difference was considered significant. 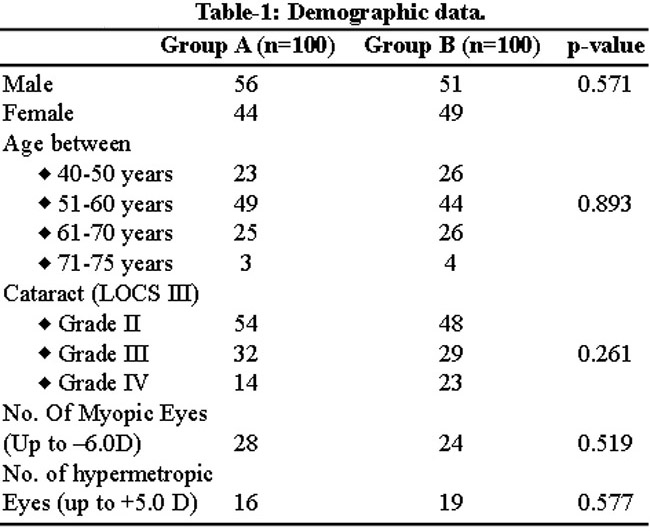 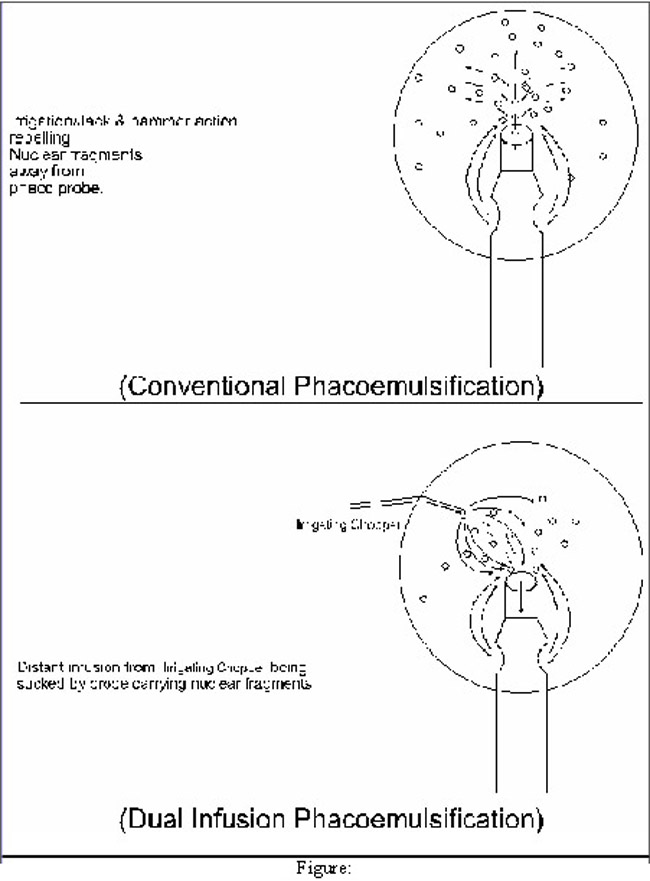 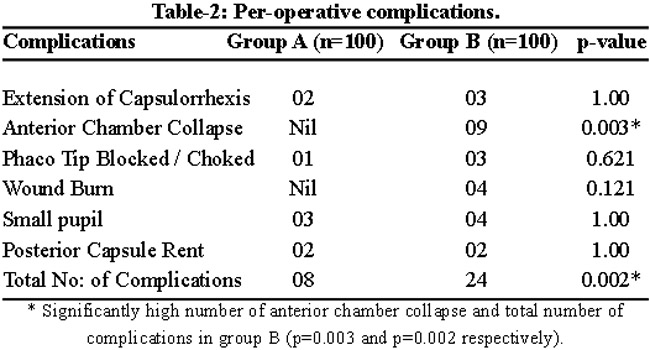 Anterior chamber maintainer has been tried before. They are useful but cumbersome. Dual infusion through irrigating chopper serves triple functions of irrigation, chopping and additional separate distant infusion. It improves anterior chamber stability and compensates surge and provides operative advantage to the surgeon.

We are thankful to Mr. Intisar Ahmad Siddiqui, Senior instructor-HCSM Program Coordinator, for his guidance in statistical data analysis.