Frequency and causes of hearing impairment in tertiary care center

Hearing and speech are mainstay of communication. Speech is intimately related to hearing as patients with impaired hearing or deafness develop speech problems and the result is poor communication between patient and environment.
Hearing is the function of the ear which receives the sound by external ear and transmits it to the cochlea in the inner ear via middle ear acoustic impedence matching system.
The task of Cochlea is to analyze the environmental sounds and transmit the result of that analysis to the brain.1 Any pathology in this system will cause deafness or hearing impairment, which may be conductive, sensorineural or mixed.
Sensorineural hearing loss includes: Congenital disorder, which may be Genetic and non-genetic, Perinatal and Acquired disorder.2
Childhood deafness is the hidden disability and leads to poor education and employments prospects.3 So, Scientific Epidemiological data is the key for preventive strategic planning. General information is given on Paedoaudiology for both parents and professionals.4 It evaluates the size and extent of the problem, which helps in planning for prevention. Profound hearing impairment is more prevalent in countries where consanguineous marriages are common such as Pakistan.3No definite epidemiological figures are available in Pakistan. However, it is estimated that prevalence of the disease is near about 10% of the population in our country. Incidence of the disease is nearly 3.5 per thousand.5 Which means about 0.5 million new cases are being sustained per year in Pakistan.
The aim of this study was to identify the frequency and causative factors of hearing impairment and deafness in a tertiary care hospital, a major problem affecting the population resulting in communication and psychiatric problems in society. This study will highlight this problem so the measure may be taken for prevention and rehabilitation.

Six hundred patients of all age groups were randomly selected in the tertiary care teaching hospital i.e. Department of ENT, Civil Hospital, Karachi from January 1998 to October 2000. Both genders were included. The criteria of patient selection was hearing loss for 01 month duration or more, in one or both ears, to exclude the psychogenic and malingerer. After, taking detail history, thorough clinical examination was done. Pure tone audiometry was performed in all cases above 05 years of age. Impedance Audiometry and Speech Discrimination was performed in selected cases. Brain Stem Auditory Evoked Potential (B.E.R.A) was conducted in profound deaf and in patients below 5 years who do not understand and execute Pure Tone Audiometery (P.T.A). Patients who complained of hearing impairment and did not have any positive clnical or audiological sign were excluded from the study.
As at the time of the study there was no Ethical Review Board in Dow University, an approval could not be obtained. All the patients included were asked for an informed consent. 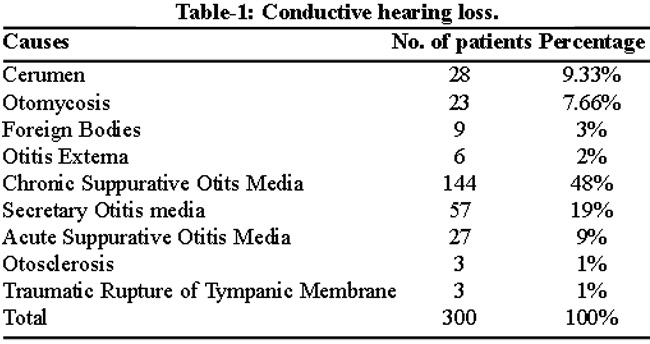 In majority of cases of sensorineural hearing loss i.e. 50% pre natal and peri natal factors predominate. Consanguinity was commonest in this study and other causes are shown in Table-2. 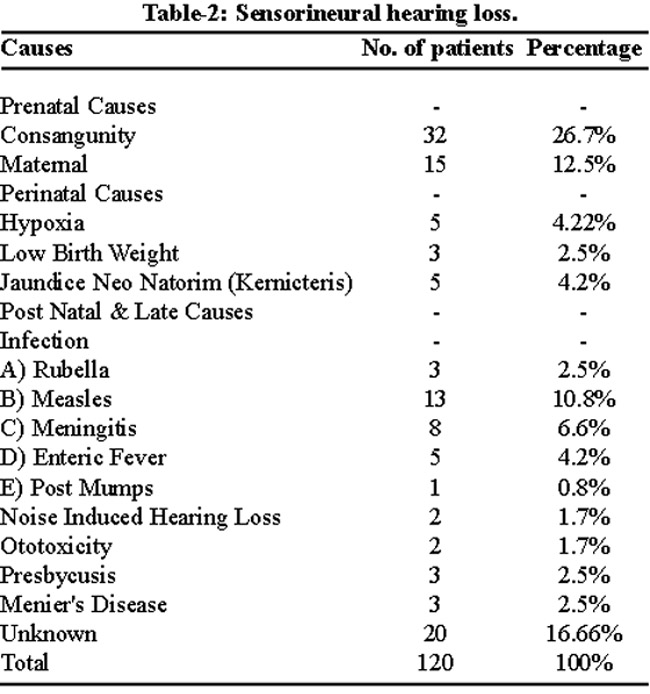 Man\'s desire to communicate his fellow beings is as old as mankind itself. Before the dawn of civilization, the primitive man used such tools of communication as drawing pictures, patterns, a shriek, a yell, a shout etc to draw attention or convey a message. The prevalence of hearing impairment is estimated to about 440 million people world wide, While Griffith K. H estimated that more than 200 million people or approximately 4% of world\'s population have a degree of hearing impairment sufficient to interfere with normal routine life, out of which million or more are thought to be profoundly deaf.6
Under developed countries share the burden of two third of hearing impaired population. Hearing impairment and deafness are a common problem in our country because 52% of our population lives below the poverty line and only 38% have access to clean water and proper sanitation. According to United Nation Development Programme (UNDP) data our literacy rate is roughly 37%, average age 54 years and par capita income U.S $ 480 p.a. currently only 2% of Gross National Product (GNP) is available for education and roughly 2% for health.7
Hearing impairment is a multi factorial disease and it is very difficult to find out the exact cause. However, etiology of hearing loss was estimated as genetic, congenital non-genetic, delayed onset non-genetic and unknown.8 Identification of causative factors, timely eradication of disease and rehabilitation of the effected persons are the milestones of prevention.
One can only educate the masses about the various causes / factors causing hearing impairment and methods of their prevention for example maternal infection is preventable by immunization and the advent in use of ototoxic drugs should be discourged. Genetic causes can be prevented by genetic counselling. Infection like rubella and syphilis can be avoided. Hypoxia, low birth weight and kernicterus can be prevented by good obstetric services while infection like mumps, measles, and meningitis can be prevented by immunization.
In conductive type of hearing loss Chronic Suppurative Otitis Media (CSOM) is the commonest cause in this study. i.e. 48%. According to study of Laisis AO, conductive hearing loss in 50% of cases was CSOM,9 while according to Griffith S et al incidence of otitis media in children may be as high as 61-83%.10 According to Potsic WP recurrent otitis media may occur in as many as 65% of patients.11 In a study by Alam J et al 47.50% of the subjects had a discharging ear.12 The reason being poverty, and lack of awareness.
In this study, the second common cause of conductive hearing loss was secretary otitis media in 57 cases (19%). Otitis media with effusion is also one of the causes of conductive hearing loss. The cardinal symptoms of secretory otitis media are middle ear effusions and conductive hearing loss.13
In sensorineural hearing loss of consanguinity is the commonest cause in this study i.e 27.6%. A study by Shamsi SA, et al showed a higher prevalence of consanguineous marriages i.e 42.12%.14 According to his study there were 21.18/1000 births of malformed babies in consanguinous marriages while 16.20/1000 births in non consanguineous marriages. One study showed that 70% of deaf children were siblings of the consanguineous and 30% at non-consanguineous.15 In a study by Razi MS, et al the hearing impaired group showed 61% consanguinity as compared to 36% in general population.16 The prevalence of sensorineural deafness in Bangladeshi children in UK population, was at least 2.3 times the national average, because they were more consanguineous marriages.17
In perinatal cause, sensorineural hearing loss due to Hypoxia was 5 (4.22%). According to Tantany AC, Hypoxia is the most common cause of sensorineural hearing loss in the perinatal stage.18 Noise is the commonest cause of preventable hearing loss. Noise induced hearing loss was noted in 2 cases (1.7%). According to Alberti PW more than 10% of population of the United States is at risk from hazardous work place noise and it is likely that Pakistan with heavy industrialization especially in urban areas, the risk is even greater.19 According to Zaidi SH in developed countries exposure to exessive noise is at least partially the cause in more than one third of hearing impaired persons.20 In a study Wahab U etal diagnosed 50 workers in a metal sheet factory{8%} out of total 600 workers in the survey.21 In a study conducted by Sheikh et al at 9 centers in the metropolis, average noise level ranged between 80-86 dB (A) minimum and 88-95 dB (A) as maximum.22 According to Itrat et al, noise exposure is hazardous to human health because it has direct effect on personnel life of humans and hearing loss increases with high noise levels and exposure to time.23 The occupation safety act (OSHA) has set permissible occupational noise exposure limit of either 85 or 90 db (A) for 8 hours and 5 days/week i.e. 40 hours/week.24 One study showed that incidence of sensorineural hearing is significantly high among the noise exposed workers v\\s non exposed individuals.25
Limitation:
This study was conducted till the year 2000. The compilation of the data and final writing of the manuscript was delayed.