Helicobacter pylori (H. pylori) infection is chronic and common throughout the world, with a higher prevalence in developing than in developed countries.1 H. pylori infection causes gastritis and is the most important risk factor for peptic ulcer disease (gastric and duodenal)2 and it also contributes to the onset of gastric cancer and primary gastric B-cell lymphoma.3
H. pylori is present in a significant number of dyspeptic patients with endoscopically normal stomach.4 A strong relationship is also documented between H. pylori and peptic ulcer disease. However, it is more common in duodenal ulcer than gastric ulcer and its frequency increases with the increasing age.5 The incidence of H. pylori infection in the patients with gastroesophageal reflux disease varies widely in literature from 3% to 90% and with approximately a consensus of 35% in most series.6 The normal gastric mucosa contains very few lymphocytes in the lamina propria. Lymphoid follicles and aggregates are characteristic of H. pylori associated gastritis. Lymphoid follicle prevalence between 27.4% and 100% have been reported in gastric mucosa from patients with H pylori associated gastritis,7 but this association becomes weaker in adults with chronic non-active, particularly atrophic gastritis.8 In the light of existing literature it is seen that H. pylori infection is associated with the severity of gastritis followed by gastric malignancies and primary gastric B cell lymphoma.7
There is a dearth of literature regarding the association of H. pylori gastritis with lymphoid follicle formation, in studies done at a National level. Therefore this study aimed to determine the frequency of H. pylori in gastritis and its association with lymphoid follicle formation.

During the period of January 2008 and December 2009, 200 consecutive gastric antral biopsy samples were included because it provides useful information regarding the H. pylori status.10 The study was approved by the ethical review board of Dow University of Health Sciences. After reviewing all the slides, 15 cases were excluded from the study, of which nine cases had inadequate material, three were diagnosed as antral polyps and three were those of adnenocarcinoma. Finally 185 cases were included in this prospective study at the Department of Histopathology, Dow Diagnostic Reference and Research Laboratory (DDRRL). The clinical data was analyzed for patient\'s age and gender. All gastric biopsy specimens for histological examination were fixed in 10% formalin, embedded in paraffin wax and cut into 4 mm thick sequential sections. All tissue sections were stained with haematoxylin and eosin to document histological examination for severity of gastritis in terms of inflammation, according to Sydney system11 and lymphoid follicle formation. Giemsa stain was used for further H. pylori assessment.12 All gastric specimens were evaluated independently by three histopathologists and finally a consensus was made on the multihead microscope for the equivocal cases.
The data was analyzed by using SPSS version16. Frequencies and percentages were computed for the categorical variables like age, gender, H. pylori, severity of gastritis and lymphoid follicle formation. c2 test was applied to determine the association of lymphoid follicle formation with H. pylori gastritis. 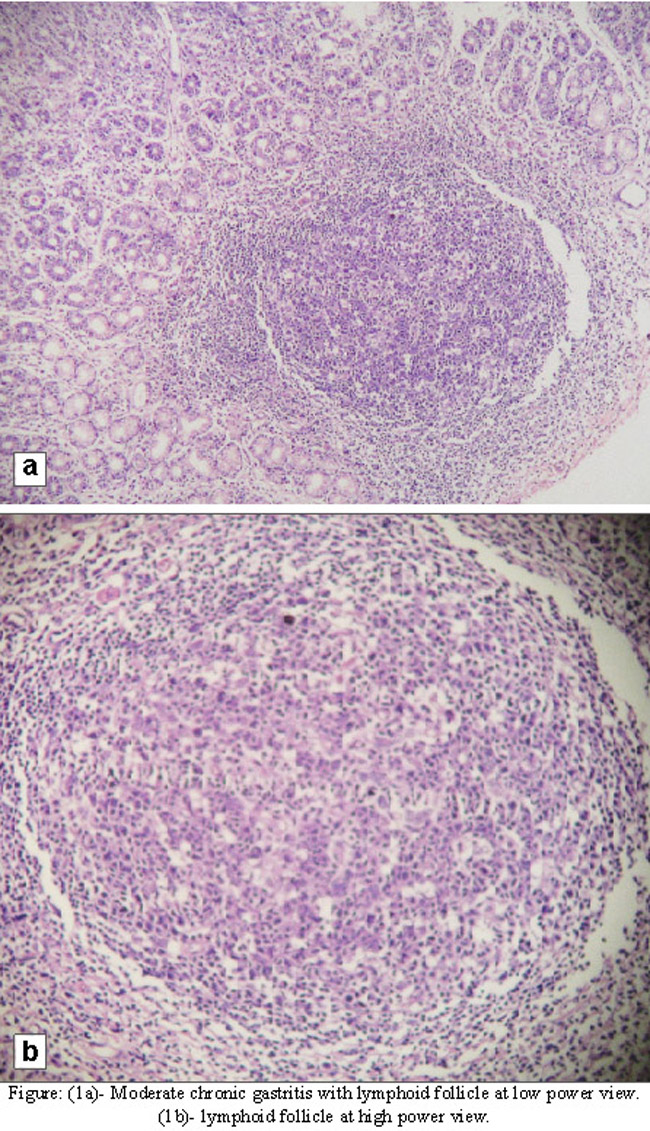 which was statistically significant (p value <0.0005), whereas 70(61.4%) had no lymphoid follicle formation, as shown by Table. 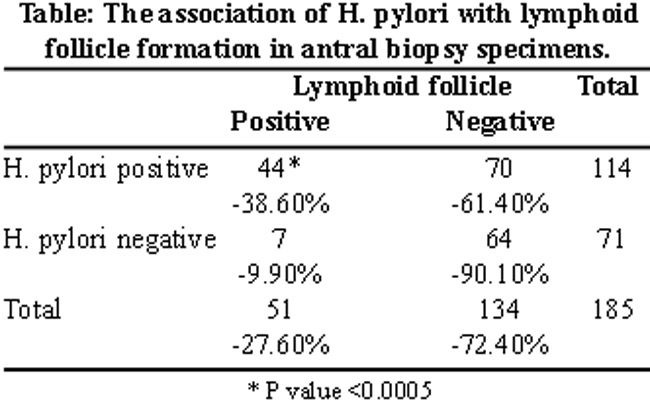 The authors are thankful to the laboratory staff of Histopathology section of DDRRL for participating in good histopathology processing. Moreover all the consultants are appreciated for their contribution and devotion in the reporting individually and in the committee. We are especially thankful to Prof. Nazeer for his advice and cooperation in the statistical calculations of the manuscript.