The association between religious beliefs and mental health amongst medical students

Objective: To determine the association between religious beliefs (RB) and mental health (MH) among medical students alongwith assessment of correlations of RB and MH with age, gender, marital status and academic success.
Methods: This cross-sectional study was carried on 200 randomly selected Muslim medical students of Islamic Azad University-Tehran Medical Branch between June and July 2006. MH and RB were assessed through General Health Questionnaire (GHQ-28) and the modified validated questionnaire, respectively. Data were analyzed by statistical methods such as Independent Sample T-test, Chi-square and one-way ANOVA methods. P-value< 0.05 was considered to be statistically significant.
Results: Of a total of 200 students, 75 (37.5%) were male and 125 (62.5%) were female with mean age of 18.98 ± 0.956 years. A statistically significant association was found between RB and MH (P=0.0001). The stronger the RB, the higher the academic success (P=0.017). Similarly a significant association of academic success was also detected with MH (P=0.000). However, there was no association of age, gender and marital status either with RB or MH.
Conclusion: Stronger RB results in good mental health and academic progress. However, further investigations are required to achieve more reliable results.
Keywords: Mental health, Religious beliefs, Medical students (JPMA 61:135; 2011).

According to the 4th edition of Diagnostic and Statistical Manual of Mental Disorders (DSM-IV-TR), mental health is defined as the absence of a mental disorder, which is a psychological or behavioural manifestation accompanied with a great suffering or with an increased risk of pain, death or impairment that is not a consequence of a particular event.
Based on Mental Health: A Report of the Surgeon General, mental health is described as successful mental functions including thought, mood and behaviour that leads to gratifying relationships, innovative activities, and the ability to deal with difficulties.
According to Campbell\'s Psychiatric Dictionary, a mentally normal person is the one who is in agreement with himself and his environment; and he does not rebel against his cultural and social requirements, as well.1
In recent decades, there has been an increase in the number of studies on the association between religion and mental health. However, most of these studies were done on a Christian sample and few studies were carried out in Islamic countries, especially on youngsters.2
In previous studies the association between RB and MH,2 fasting in Ramadan and self-respect on one hand,3and improvement in MH on the other hand4 have been demonstrated. Being faithful to religious essentials,5 doing religious activities6 and even listening to Qur\'an have been reported to be effective in lessening the anxiety before and after treatment.7 Moreover, doing religious activities has been effective in decreasing mental disorders.8
This study, evaluated the association between RB and MH in medical students. The associations between MH and RB with underlying variables such as age, gender, marital status and educational success have also been studied. Although several studies have demonstrated the effect of RB on MH improvement, doing an analytical study for recognizing the direct or indirect effect of RB and practices on MH seems to be necessary. Therefore, this study attempted at studying the statistical association between the two aforementioned variables.

This cross-sectional study was carried out on a cluster of Muslim medical students in Azad University-Medical branch in Tehran during a summer course in July 2006. This group was representative of various ethnicities and socio-economic conditions of Iranian medical students. This study was approved by the Ethical Committee of Islamic Azad University, Tehran Medical Branch.
Shiite medical students studying in the first two years of medicine were randomly selected and included in this study and they were asked not to write their names on the questionnaires for confidentiality and ethical reasons.
The data was collected using a questionnaire which comprised of three parts:
1- Demographic questions including age, gender, marital status, academic success and religious status.
2- Questions regarding MH designed according to the 28-item version of General Health Questionnaire (GHQ-28). (Appendix-1).
GHQ-28 is a self-report means that has been designed and applied for evaluating and screening minor psychological disorders, mostly depression and anxiety.9-16
It includes 4 parts evaluating A) somatic symptoms B) anxiety and insomnia symptoms C) social impairment symptoms D) depression and unhappiness.
The main questionnaire has 60 items. It was developed during 1960s and 1970s. In 1998, Goldberg and Hillier presented it as a report which was translated into 38 languages and published in more than 50 valid studies. In a study done by Noorbala et al in 1999 about MH status in adults, the GHQ-28 questionnaire was used.17
The scoring method used in this questionnaire is based on Goldberg and Hillier traditional scoring method. First two items were scored at 0 and for the next two items a score of 1 was considered. The total score was obtained by adding up scores of individual questions. The minimum and maximum score ranged between 0 and 28, respectively. A score of 5 was the cut-off point. Thus, score less than or equal to 5 represented good MH and a score greater than or equal to 6 was reported as poor MH. However, GHQ-28 is more effectively used to detect individuals who are at risk of a psychiatric disorder and not as an instrument for a specific diagnosis. Therefore, at the end of the study, those with poor MH according to GHQ-28 were advised to consult a psychiatrist for a specific diagnosis and further protocols.
3- Questions regarding religious beliefs were selected from a modified religion questionnaire (MRQ) by Serajzadeh in 1998 which was compatible with the Stark and Glock religion questionnaire.14 There were 26 items assessing four religious dimensions including RB, attitudes, behaviour and devotion. But the questionnaire employed in this study focused on RB. Each question had 5 options (absolutely disagree, disagree, neutral, agree and absolutely agree) and each person could sore between 0 to 4 on each question based upon the answer. Thus, each person\'s score could be in the range of 0 to 104 and be categorized as weak (score less than or equal to 60), average (61-84) or strong (>84) (Appendix-2).
Of the 223 questionnaires that were gathered, incomplete forms, and responses from the non — Shiite students were excluded and finally, 200 cases were entered to the analysis phase. Data was analyzed through statistical methods including Independent Sample T-test, Chi-square and one-way ANOVA methods. P-value < 0.05 was considered significant. 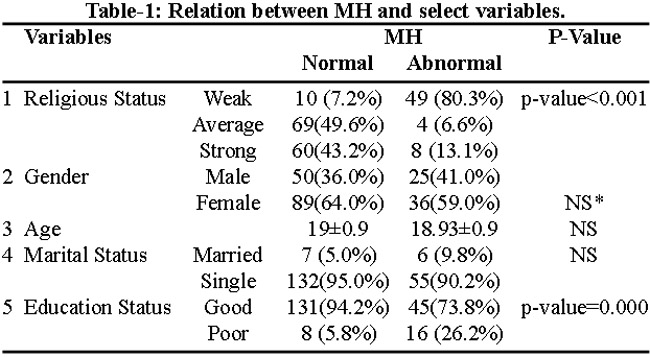 Medical students are reported to be under a lot of pressure compared to other students which in turn may lead to poor mental health such as anxiety and depression.15
Findings from this study show that a significant association exists between RB and MH which is compatible with other studies.2,5,7,8,15-25 Since this study was done in Tehran, it provides a cultural comparison with other cities in Iran. Neither are there differences in the results4-6 nor are the results incompatible with international findings.3,8,16
In a study done by Dr Vasegh and Mohammadi2 on 285 medical students in Tehran, Iran in 2004, religion was known as a protective factor against mental disorders and highly religious groups had lower anxiety and depression scores.
The frequency of poor MH reported in this study was 30.5% which seems to be more than the 21% reported in the study done by Noorbala et al in 1999.13 This difference may be due to difference in studied population. The sample population in the study done by Noorbala et al included adults older than 15 years of age while the participants of our study were only the medical students of Azad University in Tehran. It may also be due to deterioration of mental health in recent years.
No significant association was found between age and poor MH in this study which is in contrast with the study done by Noorbala et al in 1999.13
Although no significant association was detected between MH and gender, this study demonstrated that the frequency of poor MH in female subjects was more than males (59% vs. 41%) which confirms the results of other surveys conducted in Iran.13 Burden of housework, limitation in social activities, biological causes, environmental stress and marriage may be considered as causative factors putting women more at risk of poor MH. However, in a study done on 811 students, males had poorer mental health.23
No significant association was found on marital status, however, the frequency of poor MH was seen more in married subjects. It confirms the other studies13 and may be due to social and economical stress factors such as financial problems, family matters and taking care of children.
There was a significant association between MH and academic prowess that is compatible with the study done in Iran.13 Also, it was shown that there was a significant association between religious practices and academic success.

The authors would like to thank Dr Ali Reza Khoshdel, Professor of Clinical Epidemiology, for providing expert advice in statistical analyses.