Rheumatoid arthritis is the most common form of polyarticular inflammatory arthritis characterized by persistent synovial inflammation, bony erosions and progressive articular destruction leading to varying degree of physical disability. It affects 0.5-1% of population all over the world.1 The estimated prevalence of RA in developing countries is variable. Studies from Nigeria,2 Indonesia3 and Africa4 showed lower prevalence than that reported from the western countries, while the prevalence of RA in India5 (0.75%) is similar to that reported in white population from Manchester6 (0.8%). In the urban population of southern Pakistan, Karachi, the prevalence of RA is reported to be 0.142%,7 whereas in northern Pakistan the estimated prevalence is 0.55%.8
RA is a multisystem autoimmune disease which shows heterogeneity in presentation, clinical course, extra-articular systemic manifestations and associated co-morbidities. An increased mortality in RA patients has been evident over the last few decades. Male gender, rheumatoid factor, extra-articular manifestations and co-morbidity have been implicated as baseline predictors for increased mortality.9 Present study was designed to provide information regarding frequency, demography and associated co-morbidities of patients with RA who visited the rheumatology clinic at the tertiary care hospital. Another objective of this study was to determine the frequency of extra-articular manifestations which have not been yet established in RA patients of our population.

This is a retrospective study, conducted at the rheumatology clinic in a tertiary care unit (Liaquat National Hospital) Karachi, from January 2005 to June 2007. A total of 4900 medical records were reviewed and diagnosed cases of RA, of both gender and ages 16 years and above, were included .All charts were reviewed by authors. All patients fulfilled the 1987 modified ACR classification criteria for RA10 and were examined by two experienced rheumatologists.
Co-morbidities were identified by rheumatology case records and by documented nature of the medications being given by physicians for that co-morbidity. For example patients were only considered to have hypertension if anti hypertensive medications were also mentioned in the treatment record. Similarly only those patients with extra-articular manifestations were included in this study in whom other confounding factors were excluded by respective consultants. Data was analyzed by SPSS version 10. Relevant descriptive statistics like, frequency, mean and percentages were calculated for presentation of data. 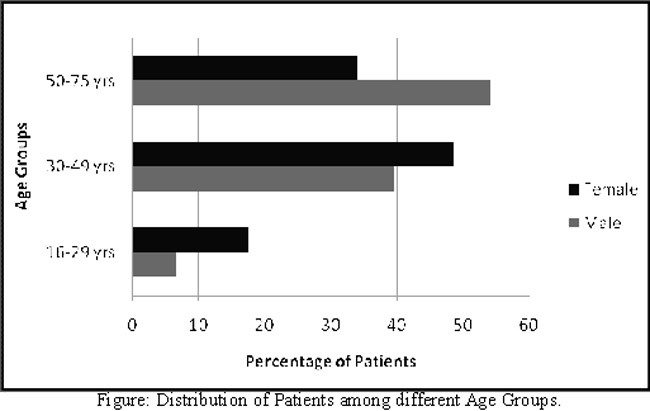 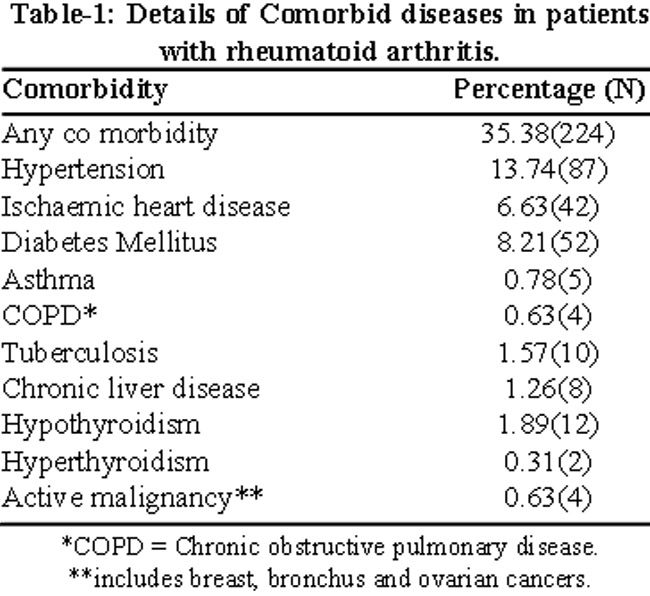 In thirteen RA patients (nine with DM and four with hypothyroidism) distal polyneuropathy and mononeuropathy were not included in extra-articular manifestations because of presence of confounding factors.
Among non biological disease-modifying antirheumatic drugs (DMARDs), leflunamide was the most common single prescribed drug in 206 (32.5%) patients. In combination with other DMARDs (plaquanil, salazopyrine, methotrexate) leflunamide was given to 79 (12.4%) patients. Methotrexate as a single drug and in combination with other DMARDs was prescribed to 72 (11.31%) and 193 (30.4%) patients respectively, whereas 42 (6.63%) patients received combination of salazopyrine and plaquanil. Biologic agents etanercept and adalimumab were given to 3 (0.47%) patients.

Rheumatoid arthritis was the reason for attending the rheumatology clinic in 12.91% of the patients among all patients with rheumatic symptoms. As rheumatology clinic at Liaquat National Hospital is one of the three centers in Karachi where rheumatology services are being provided, patients who visit our rheumatology clinic belong to both poor and affluent communities of Karachi. The authenticity of our data is enhanced by the fact that all patients were examined and diagnosed by a consultant rheumatologist.
RA is one of the many chronic inflammatory diseases that predominate in females. The prevalence is about 2.5 times higher in females than males.11 A study conducted in two districts of Karachi (Gulshan-e-Iqbal town and Orangi town) reported equal male to female ratio.7 Present hospital based study shows a considerable female predominance of RA from all communities of Karachi. A large population based study should be conducted to establish the prevalence of RA in females in our community.
The age of onset of RA is most frequent during fourth and sixth decade of life.11 The mean age of onset in our study group of patients with RA was found to be 38.5 years in females and 44.8 years in males and greater numbers of males presented in age group between 50-75 years. The paucity of male RA cases under 50 years of age observed in the present study is consistent with the study conducted by Symmons et al.12
Rheumatoid factor is found in up to 5% of healthy population.13 According to the 1987 ARA criteria any method for the detection of rheumatoid factor for which results have been positive in less than 5% of normal control subjects can be employed as a definitive criterion for the diagnosis of RA. Although the latest method (Nafelometry) which has been used in our standard laboratories has not tested healthy controls in our population, but as mentioned earlier, all cases were diagnosed by consultant rheumatologists and rheumatoid factor was not the major criterion in majority of the patients. Diagnosis of RA can be established in RA negative patients if they fulfill 1987 modified criteria and all patients in our study met those criteria. In our study greater proportion of males were factor positive as compared to females.
In RA the median life expectancy has been reported to be less than in control population14 which may attribute to the systemic inflammatory nature of RA itself, associated co- morbidities, excess infections and adverse effects of anti rheumatic drugs. Few studies15,16 have shown increased frequency of associated co-morbidities in rheumatoid cohort compared with age and gender matched non rheumatoid control. Local studies reporting the frequency of co-morbidities in rheumatoid population are not available. We observed associated co-morbidities in 35.38% of rheumatoid patients. The most common co-morbid condition identified was cardiovascular disease (CVD) including hypertension and ischaemic heart disease followed by anaemia, diabetes mellitus and peptic ulcer disease.
Many studies have established that CVD and mortality are increased in RA cohort compared to the general population after adjusting for traditional cardiovascular risk factors.17-19 Markers of systemic inflammation that is high ESR, rheumatoid factor and vasculitis have been reported as additional risk factors for increased cardiovascular mortality.16 Gabrial et al reported increased CVD events in seropositive RA.20 We also observed that significant percentage of patients with CVD were factor positive.
In the light of growing evidence of accelerated progression of atherosclerosis among active RA cohort leading to increased cardiovascular events, identification of rheumatoid patients at high risk of CVD must be an important consideration for rheumatologists. Also deranged arthrogenic index (the ratio between total cholesterol and HDL cholesterol) tends to normalize with anti rheumatic treatment. Current therapeutic strategies advocate aggressive regimens from an early stage to prevent joint destruction and the accompanying morbidities. In the recent years, there has been a major shift in the management of RA with the advent of biologic agents such as etanercept, adalimumab and infliximab, anakinra and rutoximab etc. Keeping in view the socioeconomic status of our patients, traditional DMARDs, in particular leflunamide and methotrexate have been the corner stone of most RA regimens in our tertiary care unit.
Presence of extra-articular manifestations in rheumatoid patients carries high mortality. In the present study a detailed systemic review and relevant investigations for the identification of extra-articular manifestations had been performed by consultant rheumatologists. More over all patients with extra-articular manifestations were reviewed by respective consultants to exclude other confounding factors. Prevalence of extra-articular manifestations in our population has not been established. We observed small percentage of such manifestations (3.47%) among all patients with RA. The predominant extra-articular manifestation was interstitial lung disease. It is estimated that as many as 40% of RA patients may have extra-articular manifestations.13 Turesson et al reported 49.61% incidence of extra-articular manifestations in western population.21 A study conducted in Indian population showed similar incidence of extra-articular feature to that of western population.22 Factors that generally correlate with the development of extra-articular manifestations include severe articular disease, positive factor and probably the MHC class II HLA DRB1 0401 allele.11 The small percentage of extra-articular RA observed in the present study might be due to genetic heterogeneity of our population. However prospective studies are required to identify the milder presentations of the extra-articular manifestations.

In conclusion present study signifies the substantial burden of RA at rheumatology clinic with considerable female predominance. The reported increased frequency of CVD comorbidity in seropositive RA patients could be a manifestation of systemic inflammatory nature of RA. The reported lower frequency of extra-articular manifestations could be a reflection of genetic heterogeneity in one population.