Objective: To see the levels of fractional exhaled nitric oxide (FENO) in young adult smokers and its relationship with duration and dose of smoking.
Methods: This study was conducted at the department of Physiology of College of Medicine and King Khalid University Hospital, Riyadh, Saudi Arabia from January 2009 to June 2009. A total of 60 medical students were initially recruited and 48 were finally selected for the study after fulfilling our selection criteria. FENO measurements were performed online according to the recent American Thoracic Society (ATS) guidelines and ventilatory functions were recorded.
Results: The difference in age, Body mass index (BMI), Systolic blood pressure (SBP) and Diastolic blood pressure (DBP) between the two groups was non significant. Lung function parameters included FEV1, FVC and FEV1/ FVC ratio and the difference was non significant between the two groups. It was observed that FENO was significantly lower in smokers than non smokers (16.62±5.13 verses 24.35±6.17, p=0.0001). No relationship of FENO was observed with duration and dose of smoking.
Conclusion: Young adult smokers exhibit lower levels of fractional exhaled nitric oxide compared to non smokers. This could be an early indicator of effects of smoking on lungs.
Keywords: Smoking, Fractional exhaled nitric oxide, FEV1, FVC, FEVI / FVC (JPMA 61:120; 2011).

According to the World Health Organization (WHO) statistics approximately one third of world\'s male population is smoker and similar results are reported for population in Saudi Arabia.1,2 Ischaemic heart disease, cerebrovascular disease, lower respiratory infections, chronic obstructive pulmonary disease, HIV/AIDS, diarrhoeal diseases and tuberculosis are the eight leading causes of death in the world out of which six diseases have tobacco as one of the major causative risk factor.3 Tobacco damages the human body systems slowly and so its effects do not appear until decades after its onset of use. Hence, despite the rise in tobacco smoking worldwide, the tobacco related diseases have just started to escalate.4 Spirometric evaluation is a very important tool in diagnosis follow up and management of respiratory illnesses and lung health in smokers and those exposed to occupational pollutants.5,6 Increased risk of respiratory tract infection, chronic airway disease and cardiovascular diseases in cigarette smokers may be modulated by endogenous nitric oxide(NO).7 Studies in the last few years have shown that non-invasive techniques such as measurement of fractional exhaled nitric oxide (FENO) could be used as a valuable biomarker of airway inflammation and oxidative stress, and its role in the pathogenesis of several pulmonary diseases.8 It is observed that the FENO levels decreases with smoking and appears to rise after stopping the smoking and hence monitoring of FENO levels could be used to check the improvement in lung health.9 There is no report available on the effects of smoking on FENO levels in Saudi population. Moreover there is little data on the dose-response relationship and the effect of past and passive smoking on exhaled NO levels. This study was aimed to see the levels of FENO in young adult smokers and its relationship with duration and dose of smoking.

This study was conducted at the department of Physiology of College of Medicine and King Khalid University Hospital, Riyadh, Saudi Arabia from January 2009 to June 2009. A total of 60 subjects were initially recruited. Of these, a total of 48 individuals were finally selected for the study after fulfilling our selection criteria. The subjects were divided into control and smokers group. All those subjects in both groups who had a history of asthma, allergic rhinitis or atopy, thoracic cage or spinal deformities and any other respiratory diseases which could affect FENO levels were excluded.10 Control group included 26 healthy non smoking individuals. They were matched for height, weight, BMI, and occupation with smokers group. This is important because these parameters are known to affect ventilatory function parameters and also FENO levels.11,12 Smokers group included 22 subjects. Information on smoking history was collected by administering a questionnaire. For those who answered \'\'yes\'\' to the leading question (\'\'Have you ever smoked for as long as a year?\'\'), additional questions were asked about age on starting, amount smoked currently, whether they had stopped or cut down and the amount smoked previously. The mean number of cigarettes smoked per day was used to quantify exposure in smokers. Those subjects who smoked occasionally or had duration of smoking less than 1 year were excluded from the study. To avoid the acute effect of smoking on FENO, recordings were made at least two hours after smoking the last cigarette.
FENO measurements were performed according to the present American Thoracic Society guidelines.13 We used NOX EVA 4000 chemiluminescence analyzer (SERES-FRANCE) with a sensitivity of 1 ppb by single breath technique. Using online visual monitoring the subjects were asked to inhale from residual volume to total lung capacity (TLC) and then, subjects performed a slow expiratory vital capacity manoeuvre with a constant standardized expiratory flow rate of 0.05 L/sec (± 10%) resulting in an expiration time of about 20 s, into a Teflon cylinder without the nose clipped. The expiratory flow rate was measured by a pneumotachograph of data acquisition system BIOPAC MP-100 (biopac systems inc, USA). Plateau levels of FENO against time were determined and expressed as parts per billion (ppb). Mean exhaled NO concentrations were determined between 5 and 15 s after start of the expiration. Three successive recordings were taken and the best record was used in analysis. Ventilatory function parameters were recorded after FENO measurements. Forced expiratory volume in 1 s (FEV1), forced vital capacity (FVC) and FEV1/ FVC ratio, were measured by the Vitallograph (ALPHA, Ireland). All recordings were made in sitting position. At least three readings were obtained and the best of three was taken as the final result.
The data was analyzed by computer software programme Statistical Package for Social Sciences (SPSS Version11). Data was expressed as mean ± SD for continuous variables and as percentages for categorical variables. The test applied for statistical analysis was Student\'s t-test and Pearson\'s correlation coefficient. A p value of < 0.05 was taken as statistically significant and all tests were two tailed. 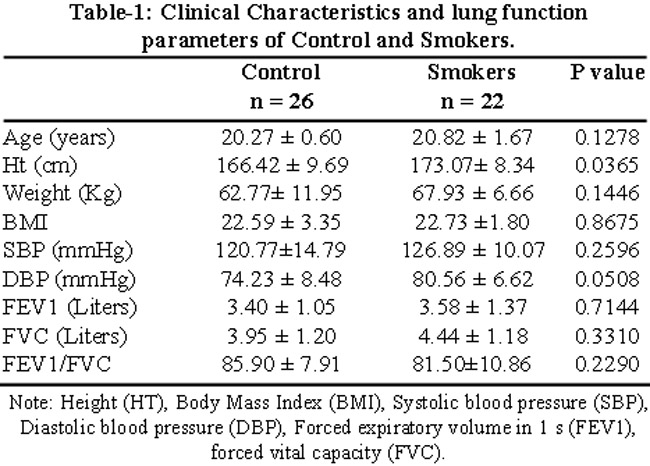 Table-1 shows clinical characteristics and ventilatory function parameters of control and smokers. There were non significant differences in age, BMI, SBP and DBP between the two groups. 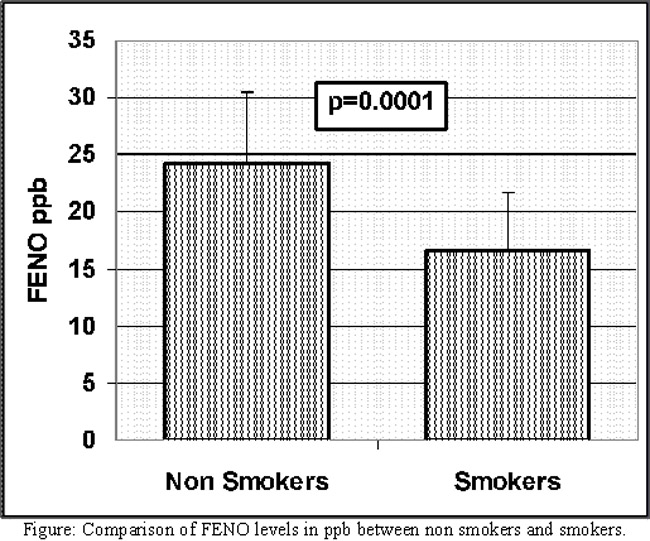 Lung function parameters included FEV1, FVC and FEV1/ FVC ratio and the difference was non significant between the two groups. Average duration of smoking was 38 ± 16.22 months and average number of cigarettes smoked per day was 13.83 ± 6.63 cigarettes per day. It was observed that FENO was significantly lower in smokers than non smokers (16.62 ± 5.13 verses 24.35 ± 6.17, p=0.0001). No significant relationship of FENO was observed with age, height, weight, BMI, duration of smoking and dose of smoking (Table-2).

Our study demonstrated that FENO levels are decreased in young adult cigarette smokers. Although no relationship of FENO is observed with duration and number of cigarettes smoked per day. This is the first report from Saudi Arabia of FENO levels in smokers. These results support the observation of Balint et al14 who reported lower levels of FENO in smokers. However, the mean age of non smokers and smokers in their study was higher than that in the present study. Previous studies have also reported similar findings15-17 although their subject population was much older than ours. Our study didn\'t find any relationship between number of cigarette smoked per day and levels of FENO. Although one study indicated that the levels of FENO varied inversely with the dose and duration of smoking.18 Our results did not indicate such findings, probably because the participants were much younger and came from a different environment. Nitric oxide is produced in the lung epithelial cells by nitric oxide synthases (NOSs) of which three distinct isoforms exist.19 It is also reported that cigarette smoke decreases expression of inducible nitric oxide synthase (iNOS) and thus NO production in lung epithelial cells.20
It has been reported that FENO levels can be reversed by cessation of smoking.21 Not only active but passive smoking is also associated with decrease in FENO levels.22 More sustained decrease in FENO could be due to down regulation of NOS.23 We have reported previously that FENO levels were significantly high in chronic stable chronic obstructive pulmonary disease patients. This could be due to accumulation of inflammatory exudates in the lumen and infiltration of small airways by inflammatory cells releasing cytokines which lead to increased expression of iNOS.24
Alteration in FENO levels with smoking in young smokers may make them more susceptible to develop COPD earlier than those who start smoking in later ages. With further progression of pulmonary pathology, inducble NOS is stimulated and results in abnormally very high levels of FENO. Further studies are needed to expedite the effects of smoking on NOS isoforms and pulmonary tissues.

The authors would like to thank Mr Timhar for technical assistance.