Objective: To assess the possibility of detecting ovulation through observing changes in composition of milk and using this as a simple and non-invasive method.
Method: Twenty five normal lactating women (menstruating and non-menstruating), varying in age from 18-35 years and taking no hormonal contraceptives were included in this study. Hormonal estimation was done by radio -immunoassy and changes in milk composition were observed by measuring the concentration of Na+, Cl, K+ and lactose.
Results: Changes were observed in milk composition of four menstruating women (ovulatory), characterized by significant increase in concentration of Na+ and Cl and decrease in concentration of lactose and K+. However, in one non-menstruating woman who was found to have ovulation, these findings could not be observed.
Conclusion: Results show that the determination of Na+, K+, Cl- and lactose in milk of lactating women have a high value for detection of ovulation (JPMA 51:112;2001).

To monitor ovarian function, scientists and clinicians have explored the possibilities of using various biological fluids. Two fluids that have received attention are saliva and breast milk1-4. Hartmann and Prosser5,6 have described important and significant changes of Na+ and glucose in the milk of ovulatory women. They reported an increased Na+ and C1- concentration from (mean±sern) 4.6±0.2 m.mol/L and 11.1±0.2 m mol/L to 10.1±0.09m.mol/L and 22.0±0.9 m.mol/L respectively. During the first change both sodium and chloride increased 2.4 and 2.24 fold respectively. During the second change both increased 2.2 folds. However, lactose and K+ concentration decreased from 7.8±0.2 g/100ml and 13.6±0.5 m.mol/L to 6.0±0.2 g/100 ml and 10.2±0.2 m mol/L, respectively. This was almost a 1.5 fold decrease. ln the second changes there was a decrease of 1.3 to 1.4 folds. The authors opined that the first change in milk composition corresponded to time of initiation of the final stages of follicular maturation (1st 6 days before ovulation). The second change was ascribed to decline in corpus leutium function (6 to 7 days after ovulation)5,6
The present study was conducted to assess the possibility of detecting ovulation through changes in composition of milk and using this as a simple and non-invasive method for detection of ovulation.

Lactating mothers were divided into menstruating and non-menstruating groups. Samples of breast milk, urine and blood were collected according to the following protocol.
Menstruating
Milk: Once a week starting from 1st week of menstruation on 1st or 2nd day of each week (four samples), each woman collected her own samples (0 1-05 ml) by manual expression directly in the sterile, deionized vials, between 10 a.m. to 12.00 noon and immediately stored at - 15 Co until analysed.
Urine: Once a week starting from 1st week of menstruation on 1st or 2nd day each women collected her own urine sample (early morning) in sterile bottles and stored at - 150 C until analysed.
Blood Mid Menstrual: At mid-menstrual stage 2-5 ml blood was collected in a sterile disposable syringe. The blood was centrifuged for separation of serum within one hour after collection. Serum was kept in sterile screw capped bottle at -15°+ C until analysed.
Non-Menstruating
Four samples of milk and urine once a week were collected starting from any week. Other procedure was the same. Blood samples were collected from each woman once and analysed as described earlier.
Detection of Ovulation
Hormonal estimation for determination of ovulation was done by measuring progesterone in serum and milk and estradiol in urine. Ovulation was presumed to have occurred if serum and milk progesterone values were 4.5 ng/ml; mid menstrual and urinary estradiol values (in early morning specimen) at 300 m mol/L or more.
Previously many workers have employed morning urine for estimating steroid glucuronoids in order to determine ovulation7,8 and progresterone in milk5,6.
Analytical Methods
Lactose: 1:200 Dilution volume/volume of milk in water by Folin Wu method cited by Hawk9. Sodium and Potassium: 1:100 dilution of milk volume/volume in deionized water by flame photometer. Chloride: by Mercuric Nitrate, Titration method of Scheles and Scheles.
Radio Immunoassay of Hormones
Hormonal estimation i.e. progesterone in serum and milk and urinary estradiol was carried out by radio im rn unoassay (World Health Organisation) procedure.

The data on milk sodium, potassium and chloride is given in Tables 1,2 and 3. 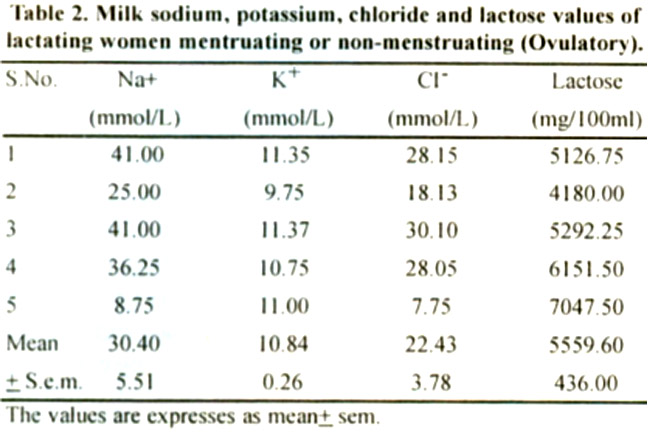 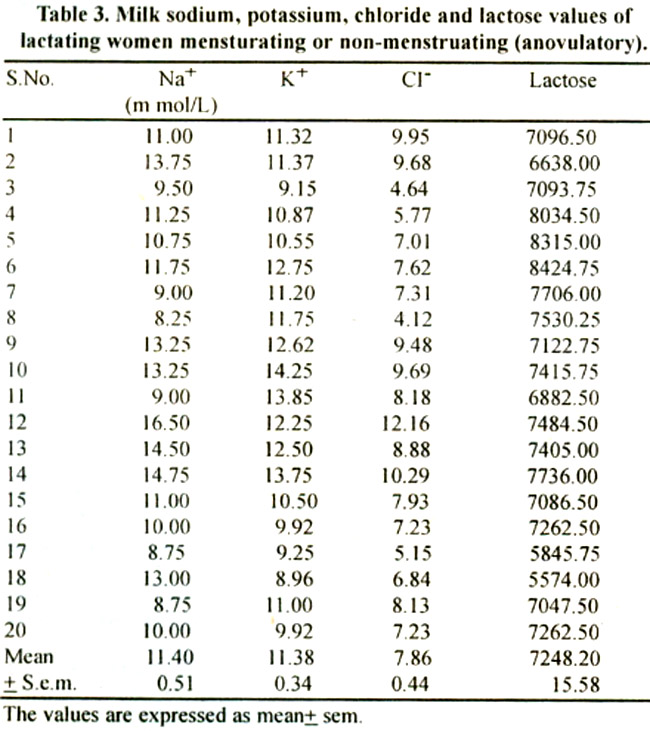 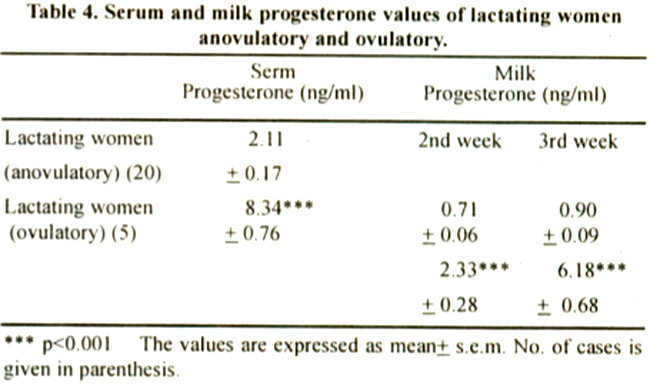 These values showed significantly (p<0.01) higher level of progesterone in ovulatory as compared to an ovulatory women. Urinary estrodial values have been presented in Table 5. 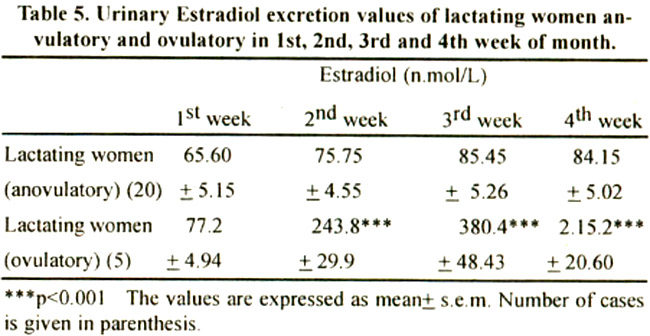 Data shows that the secretary level of estrodial increased in the urine between 2nd . 3rd and 4th week and this difference was statistically significant (p. 0.001). 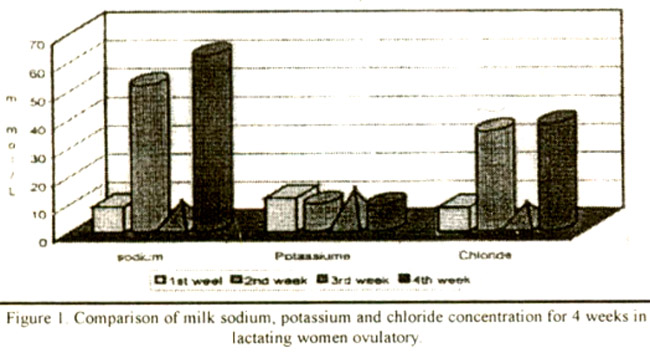 While lactose and potassium decrease by 1 .8 and 0.8 in the first change while in the second change lactose decreased by I .2 and potassium by 0.8 fold (Figure 2). 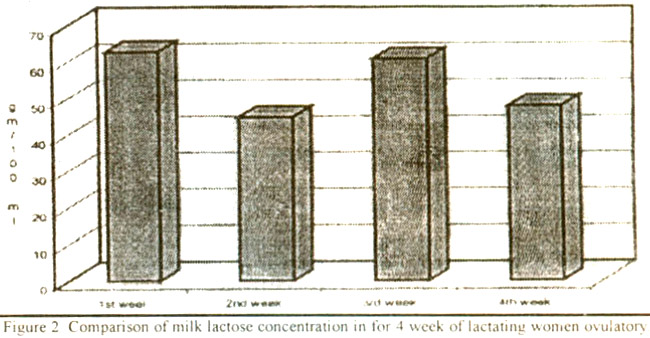 These results are in agreement with the earlier worker5. In present study the ovulatory group showed negative correlation of sodium and chloride with lactose (r =-0.48 and 4 =0.4 1 respectively). While sodium has positive correlation with chloride (p<0.001) (r= -0.99) potassium and lactose have positive correlation (r=0.62) and there is a negative correlation between sodium and potassium (r = - 0.59). These results substantiate that of Hartmann and Prosser5.
Among the anovulatory women sodium and chloride showed positive but non-significant correlation with lactose. The most plausible explanation for this observation could be an increased permeability of mammary epithelium by the formation of paracelluar pathway there by allowing the partial equilibration of milk with extra cellular fluid resulting in lactose and potassium passing out of the secreted milk into the extra cellular fluid through leaky, tight junctions. Conversely, Na+ and Cl would move from the extra cellular fluid into the secreted milk. Thus it may be inferred from the study that the determination of Nat, K+, Cl and lactose have fairly high value for detection of ovulation in lactating women.

The authors wish to thank National Institute for Fertility Control, Karachi for providing funds and technical support during these studies. Thanks are due to Dr. Sadaqat H. Hanjra and Mr. B. George (tJNDP). Quetta for reviewing and typing of this manuscript.