Objective: The maternal deaths occurring over a twelve-year period (1988-1999) in a tertiary referral center were reviewed. The purpose of the study was to assess the causes of these maternal deaths.
Setting: The Aga Khan University Hospital (AKUH) Karachi, Pakistan.
Methods: The medical records of maternal deaths were reviewed. These were women who had either registered for delivery at the hospital; or were referred from another hospital or from home, when an emergency developed. They were either admitted to the Medicine, Surgery and the Obstetrics and Gynaecology Departments at the hospital.
Results: A total of 81 maternal deaths were identified, of which five were the registered patients. Causes of deaths were eclampsia, puerperal sepsis and pulmonary embolism. The maternal mortality ratio in the registered patients was 20 per 100,000 live births. Ninety percent of the women were between the age group of 15-35 years. Of these forty two percent were primigravidas, forty four percen’ of the women died due to direct causes, of which sepsis was the most common cause and accounted for twenty five percent of the total deaths. Indirect causes were responsible for 55.6% of the deaths, including hepatic failure in 21%, other infectious disease in 17% and malignancy in 5% of the cases.
Conclusion: In developing countries other than obstetrical causes, infectious diseases contribute to the death of women during childbearing years. Comprehensive medical services and adequate obstetrical emergency services can lower maternal mortality rates at all levels (JPMA 51:109;2001).

Pakistan like other developing countries of South Asia has high maternal mortality rates1. In a country where the total population is 130 million the estimated maternal mortality rate is 340 per 100,000 live births2. The magnitude and causes of the problem are difficult to measure as many estimates are based on hospital statistics. Seventy percent of the women (83% in the rural area and 40% in urban areas) do not receive any antenatal care. Majority (85%) deliver at home and in only 35% of the cases trained personnel are available. These deliveries and deaths may never be registered3,4 and not many women who develop obstetric complications, may reach a hospital facility for treatment. Amongst those who go to hospital for prenatal care, majoritiy go to private hospitals rather than Government hospitals5.
In developing countries other than obstetrical causes, infectious diseases contribute to the death of women during childbearing years. The response to infections in pregnancy is altered, such as in malaria and hepatitis E, which are prevalent in Pakistan6.
This report is based on analysis of the maternal deaths that occurred over a twelve-year period in the Surgical, Medical and Ob-Gyn Departments of a tertiary referral private University hospital in Karachi. Most of these women had no prior contact with any trained health personnel3.

The Aga Khan University Hospital (AKUH) is a private referral hospital with comprehensive services at tertiary level. The Hospital is located in Karachi, which has a population of over 13 million. The Obstetrics and Gynaecology department was commissioned in 1987 and the number of deliveries has increased to approximately 3000 per year. Ninety eight percenrof these deliveries are registered patients who have attended the antenatal clinics at least once.
Maternal deaths reviewed were those that had occurred in women who were either pregnant, or recently delivered and had died after being admitted to either the Surgical, Medical or Obstetrics and Gynaecology departments in AKUH from 1988 to 1999. These included registered patients and those who had only presented as emergencies. In all cases the attending physician had documented the diagnosis in the patients’ files. The Medical Records Department at AKUH uses the WHO lCD 9 CM Coding for identifying diagnosis and lCD Codes 630-677 were selected for this review. All the files registered as maternal deaths were retrieved and the relevant information regarding booking status, age, and information of previous and current pregnancies and cause of death were obtained.

A total of 81 maternal deaths were identified during the eleven-year period (1988 to 1999) in the entire hospital.
Five deaths occurred amongst registered patients from a total of 24,739 live births, which occurred in the Obstetrics and Gynaecology department. Two of these women had died of eclampsia, two of puerperal sepsis and one from pulmonary embolism. The maternal mortality rate calculated for our registered patients was 20 per 100,000 live births. Seventy-six patients were self referred or referred from other hospitals, as an emergency to the different admitting departments at AKUH. The maternal mortality rate of registered and the emergency referrals who died in the hospital was calculated as 327 per 100,000 live births.
Parity and age: Out of these 8 1 deaths, forty two percent had occurred in primigravida, forty four percent in multiparous and 14% in grandmu!tiparous women. Ninety percent of the deaths were in the age group of 15-35 years. Forty percent had live born babies, 15% had stillbirths, 1 5% abortion and 30% died undelivered.
Causes of death: Forty four percent deaths were due to direct causes. Sepsis was the commonest cause and accounted for 25% of all deaths. The other direct causes were hemorrhage and hypertension, 12% and 7.4% respectively. Indirect causes were attributed to 55.6% of the cases and included hepatic failure in 21%, infectious disease in 17% and malignancy in 5%. (Table). 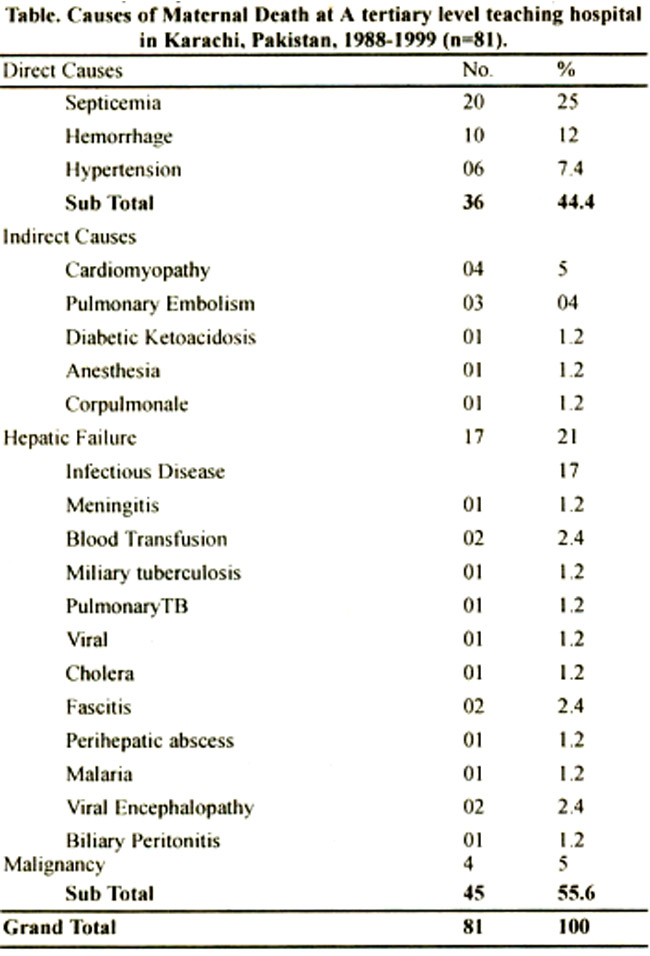 Pakistan, India and Bangladesh account for about 28% of the world’s births and 46% of its maternal deaths7. It has been estimated that the lifetime risk of a woman dying of pregnancy related causes in these countries are 1 in 40 as compared to 1 in 3600 in the developed world. There are approximately 25,000 maternal deaths in Pakistan every year and another 375,000 suffer complications, according to estimates that for each of the women who die, about 15 others are left with disability, which may be permanent2,6.
This data comes from a tertiary level teaching hospital in the private sector. The maternal mortality rate of the registered patients compares favorably with those from other private hospitals in Pakistan7,8. This may be due to availability of emergency services in most private hospitals around the clock as compared to the public sector, where infrastructure is not adequate both in quantity and quality of services provided, especially in rural areas where more than two thirds of the population reside. The availability of trained personnel, operating facilities, laboratory services, and blood bank services are essential for dealing with emergencies in obstetrics services.
Studies show that services for simple laboratory procedures is available around the clock in only 44-50 percent of hospitals in the Sindh province. Blood bank services are available in 35% and trained obstetric staff in 39% of the hospitals9.
Hospital based review of maternal deaths continue to show a high incidence of deaths associated with sepsis. This may be because these women survive long enough to reach a hospital and be included in the statistics while those with hemorrhage do not10-12.
Population and hospital-based studies from Pakistan continue to demonstrate hepatic failure as an important indirect cause of maternal deaths8,11-13 Infectious diseases are responsible for 34.5% of all deaths in women age 15-49 years11,2,12,15. Hepatic infections constitute 20% of these deaths. While reviewing indirect causes of death hepatitis is a common cause of mortality in pregnant women11.
The findings regarding the causes of maternal deaths however have implications for planning at all levels of obstetric services in Pakistan. It also shows that, with comprehensive medical and adequate obstetrical emergency services, maternal mortality rates can be reduced.