Increasing number of benign causes of portal venous gas are being identified as technology advances. Therefore every patient needs to be considered in the clinical scenario of presentation and treated accordingly.

Portal venous gas was initially reported as signifying bowel wall ischaemia which requires emergency surgery. Due to technological advancements more cases of portal vein gas have been diagnosed, and the significance of this finding in an emergency situation has been decreased. However, the most common cause of portal venous gas remains bowel ischaemia and mesenteric vascular pathology (61.44%), followed by inflammation of GIT (16.26%), obstruction and dilatation (9.03%), sepsis (6.6%), iatrogenic injury and trauma (3.01%), cancer (1.8%), and idiopathic causes (1.8%).1 Even in cases of bowel infarction, trans-mural bowel necrosis is associated with a poorer outcome5 than partial thickness bowel wall ischaemia. The mortality of this condition is reduced from 75% in previous studies to 39% in recent literature due to earlier diagnosis and better management of the underlying disease process.4 The clinical condition of the patient and the extent of portal venous gas are prognostic indicators meaning, that the less the amount of portal venous gas, the better the prognosis.6 In a case of mesenteric ischaemia, portal venous gas is present in the mesenteric veins, and depending on the site of ischaemia, it may be present in the superior or the inferior mesenteric veins, from there on the gas tracks to the portal vein. On plain radiographs, portal venous gas can be detected as branching linear opacities towards periphery of the liver usually within 2 cm of the liver capsule.2 Detection on plain films requires a substantial amount of gas to be present .
Ultrasound shows air as multiple echogenic dots located towards the liver periphery, and doppler ultrasound shows these shadows as moving echoes within the portal venous radicales. This has been described as the "flaming portal vein" appearance as though the portal vein is on fire.7 CT scan shows air densities within the radicales of the portal vein, predominantly in the left lobe. Gas in the portal vein needs to be differentiated from biliary ductal gas, which is distributed centrally and does not show extensive branching as is seen in portal venous gas.8
In the presented patient, portal venous gas could not be detected on plain abdominal radiograph. X-ray plain abdomen showed normal bowel loops, Ultrasound and CT scan showed gas in the peripheral radicales of the portal vein. No gas was seen in the main portal vein, or in the superior or inferior mesenteric veins. The patient\'s clinical condition was fairly stable, and she had no complaints referable to gastro intestinal system, so a laparotomy was not indicated. Conservative management with appropriate antibiotics assisted in resolution of the clinical and radiological findings.
The postulated mechanisms of gas in the portal vein are three, Mesenteric ischaemia, abdominal distension, and sepsis, which accounts for the majority of cases. Mesenteric ischaemia was ruled out in the patient as she had no significant abdominal complaints. X-ray, ultrasound, and CT abdomen did not show any intestinal abnormality. Patient had a history of gastrectomy 03 weeks prior to the onset of symptoms. Gas has also been reported in the portal venous system after solid organ transplantation,2 this gas usually resolves over a period of 02 weeks. In this patient the gas was detected 04 weeks after surgery. Without any history of endoscopy or other signs or symptoms of abdominal distension. The septic causes which may result in development of portal vein gas include intra abdominal sepsis, appendicitis, cholangitis, diverticulitis, pyelophlebitis, and abdominal wall gangrene. Ultrasound and CT examination of the patient were negative for intra-abdominal sepsis. Blood culture report showed growth of Enterobacter aerogenes, which is a gram negative bacillus. An infection by this organism may follow any abdominal surgical procedure. Immunosuppressed patients i.e. patients on chemotherapy are more prone to infection by this organism. The patient was diabetic and at risk for developing unusual infections. As Enterobacter aerogenes ferments glucose, it is postulated that bacterial intraluminal fermentation of carbohydrates may cause portal vein gas9 or septicaemia in branches of Porto mesenteric veins, which may cause development of Portal venous gas.10 The first mechanism may be operative in our patient. As a sub population of this organism produces extended spectrum beta lactamase (ESBL) it may become resistant to many antibiotics including third generation cephalosporins. The patient responded to second generation cephalosporin and Metronidazole. Follow up with ultrasound and CT scan one week thereafter showed complete resolution of portal vein gas. Clinical knowledge and literature search has yet to reveal this organism as a cause of portal venous gas collection, in any patient without intra-abdominal sepsis at presentation.

A 43 year old female was referred for ultrasound examination. She complained of fever with rigors on and off with temperature rising to 104ºF for the last one week. She had loss of appetite with intermittent vomiting. She had a history of gastric surgery with sleeve gastrectomy 04 weeks ago for morbid obesity and uncontrolled diabetes, following which she remained alright for 03 weeks. The ultrasound examination showed portal vein gas in the periphery of portal venous radicals in the liver (Figure-1). 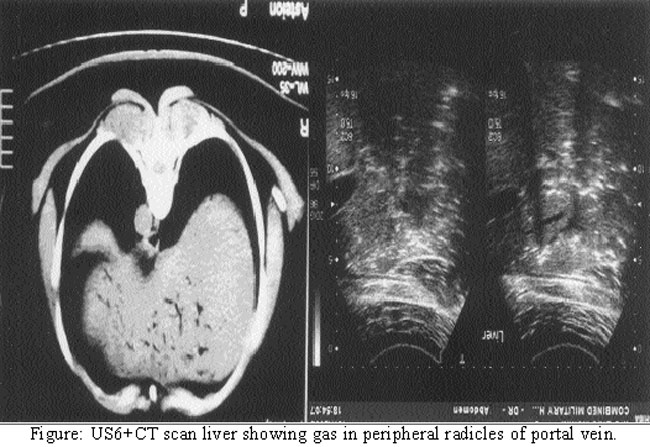 Main portal vein was unremarkable. Doppler examination of the coeliac artery and mesenteric vessels was normal. Patient was advised plain X Ray abdomen in lying and standing positions to look for bowel ischaemia. These were normal with no X-Ray evidence of bowel ischaemia. Patient was subsequently taken for a CT scan of the abdomen, and CT scan confirmed the findings of ultrasound (Figure). Portal venous gas was found in the periphery of portal venous radicals with no abnormality of the main portal vein. The treating physician was informed about the radiological findings, and the patient\'s blood cultures were taken. Antibiotic cover with Inj. Cefuroxime, Inj. Nelbuphine and Inj Metronidazole was started. Her TLC count was raised at 12.1x109 /uL, with glycosylated haemoglobin of 7.61. Urine routine examination showed proteinuria, and Serum albumin was 20g/l, liver function tests were unremarkable. Blood culture report received after 03 days showed growth of Enterobacter aerogenes, since the patient showed good response to antibiotic therapy, treatment was not changed. During her admission, the patient remained afebrile. She was sent for reevaluation of portal venous gas after one week of treatment. Her ultrasound and CT scan did not show any gas in the portal vein. She was subsequently discharged with advice to continue Tab Metronidazole for another 05 days with follow up in the outpatient department. On follow up, the patient is well, she has lost 15 kilograms weight post surgery and her blood glucose is stabilized with oral hypoglycaemics.

Portal vein gas was once thought of as an invariably fatal condition. Now, with the availability of better equipment and expertise, the condition is more frequently diagnosed. A case of fever with rigors is presented and on ultrasound and CT examination was found to have portal venous gas which resolved with adequate antibiotic treatment. Blood culture revealed growth of gram negative bacillus; Enterobacter aerogenes. Patient was investigated further for portal vein gas, and although no other cause for the development of portal vein gas was found, she was treated with antibiotics and showed an immediate response. The aim of this case report is to highlight the benign causes of portal vein gas as well as to discuss the causes which warrant immediate surgery. Portal vein gas may herald a more ominous condition, which if intercepted in its course may result in complete cure.
Keywords: Portal vein gas, pyelephlebitis, ultrasound, CT scan, biliary tract gas, Enterobacter aerogenes.

Portal vein gas has traditionally been thought to represent serious abdominal pathology with the most common cause of portal vein gas in published literature being bowel ischaemia and mesenteric vascular pathology, which accounted for 61.44% of cases.1 Apart from this cause, portal vein gas may be seen in cases of portal pyelophlebitis, ulcerative colitis, Crohn\'s colitis, diverticulitis, cholangitis, cholecystitis and abdominal abscesses. Advanced technology has found benign causes of portal vein gas which have been identified; these include gastroscopy, colonoscopy, organ transplantation2 and following radiofrequency ablation of hepatomas.3 Kinoshita et al. review of 182 cases of portal venous gas indicated a much lower mortality rate (39%) owing to earlier detection by means of more sensitive diagnostic techniques, including computed tomography (CT), ultrasonography (US), and better management of the underlying disease process.4 Once a patient is diagnosed with portal venous gas, decision for therapy depends to a great extent on the clinical condition of the patient.1 Patients with signs and symptoms of acute ischaemia require emergency surgery while in patients without any signs of abdominal pathology, a conservative approach should be adopted. The patient was treated as a case of acute infection and showed a favourable response in her clinical presentation with subsequent resolution of portal vein gas, 05 days after initiation of treatment.