Knowledge attitude and perception of dispensing doctors regarding generic medicines in Karachi, Pakistan: A qualitative study

High expenditure and increasing health care costs are prime concerning factors in the health care system globally. In some of the developing countries WHO reported out-of-pocket payments as high as 80% of health care spending.1 At present Pakistan is spending only 1.2% of GDP on pharmaceuticals and despite more than 40000 registered brands in the country2 essential and life-saving drugs are missing from the market. Due to inaccessibility of drugs in the public hospitals, 77% of medicine expenditures are out of pocket and thus, access and affordability of medicines is a vital issue to tackle in Pakistan.3 In an attempt to struggle with the escalating drug cost in Pakistan generic prescribing and dispensing could be a solution to approximately one third of the population living below the poverty line. Although there is no ordinance or authoritative rule for generic prescribing or substitution in the public and private sector in Pakistan, recently the Government of Pakistan highlighted the use of generic medicines in order to check the prices of medicines. In Pakistan there is a need to sensitize patients, prescribers and pharmacists to improve the quality use of generic medicines.3 However, to gain a wider health professionals\' support, it is vital to understand the issues surrounding generic medicines.4 Current study is aimed to explore the knowledge, perception and attitude of dispensing doctors towards generic medicines as well as to document the factors hindering and favouring generic medicine use by dispensing doctors of Karachi, Pakistan.

This exploratory study aimed to generate new dimensions for further studies on larger scale and therefore, rather than quantifying, understanding the issue was the target and for this purpose a qualitative methodology was adopted.5 A semi-structured interview guide developed after extensive literature search was used as an instrument to interview a purposively selected sample of eleven dispensing doctors. In the current study respondents were identified by snowball technique and the interviews were carried on till the point of saturation.5 Snowball sampling is considered the best way to locate respondents with certain attributes or characteristics as well as instrumental in difficult to reach population.5 All the interviews were conducted at the respective practice settings of the respondents from March 2008-May 2008. The interviews were audio-taped and transcribed verbatim. After verification from the respondents the principal author evaluated the transcripts using thematic content analysis which was further subjected to verification by other authors\' analyses. Out of eleven dispensing doctors eight of them were males and three were females practicing in the peri-urban and slum areas of Karachi, Pakistan. The major themes identified were knowledge of generic medicines, perceptions regarding generic medicines, attitude towards generic medicines, and perception towards marketing strategies of pharmaceutical industry for brands and generics as well as recommendations to further enhance generic utilization. The selected quotations from the interviews and pictorial representation of emergent themes are shown in Table-1 and Figure-1 respectively. 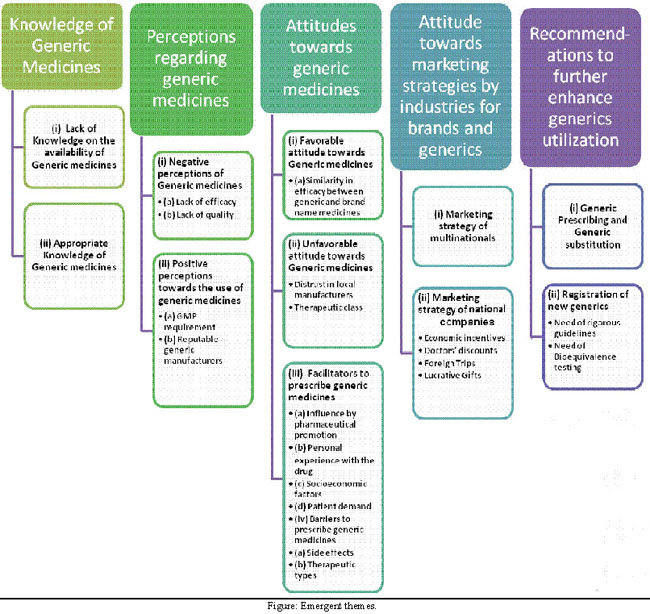 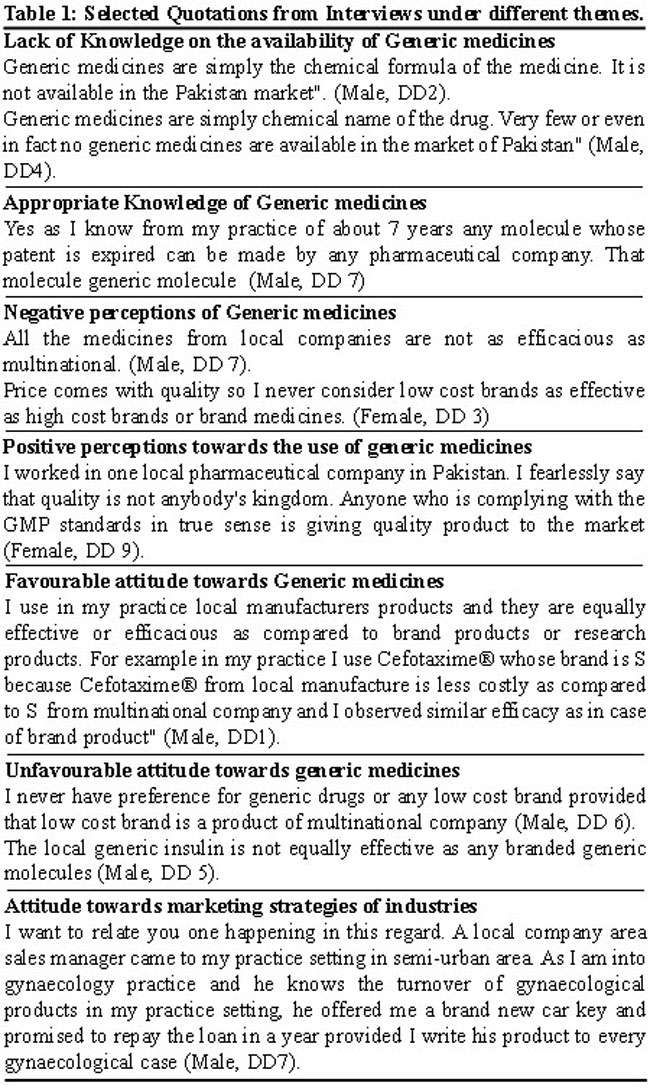 Prescribing and dispensing, although knitted well, are two different domains harnessed by doctor and pharmacist respectively. In developing countries generally no consultation fee is paid to the doctor without getting medicine and thus doctors generate income by dispensing.6 In Pakistan there is no law regarding dispensing by doctors. Thus being taken as general presumption of permissibility to dispense, 80% of the doctors dispense in Pakistan.6 In a nutshell doctors in Pakistan exercised strong grip on both prescribing and dispensing.
This study demonstrated gaps in understanding of the availability of generic medicines in Karachi, Pakistan. The current study also identified mixed views and attitudes of dispensing doctors towards generic medicines. The knowledge of dispensing doctors about generic medicines was sparse. On probing it was revealed that they miscorrelate the term \'generics\' with International Nonproprietary Name (INN), which made them unaware of the presence of generic medicines in Pakistan.
Although studies done in Slovene and West Indies showed respondents\' confidence in knowledge about generic medicines and generic bioequivalence,7,8 however, this study failed to highlight any understanding of bioequivalence criteria for generic medicines. In this study low cost of generics and negative feedback from the patient made few doctors unsure of the quality and efficacy of generic medicines.
This showed concordance with a Malaysian study in which generic drugs are viewed as cheap, lacking and questionable.9 In Pakistan the failure of Generic Medicine Act, due to logistical constraints in demonstrating drug quality, contributed to negative perception about generic medicines.10
In this study some of the respondents considered generic medicines, if being derived from high quality national companies, as safe and effective as any multinational product.
Dispensing doctors admitted to be influenced by pharmaceutical industry and commercial sources of information. Interestingly, this qualitative study failed to highlight any incentives and gifts offered by multinational pharmaceutical companies to dispensing doctors. On the contrary mammoth incentives in the form of extra discounts to doctors, international trips to attend conferences and seminars, and compensable gifts such as cars and promotional gifts like penholder were admitted by the prescribers as \'driving forces\' to write their products. This is in accordance with the work done by Hassali and his associates11 which highlighted the use of promotional gifts as factors influencing prescribing patterns. Quality assurance is questionable in Pakistan as effective bioequivalence studies are not required for generics at the time of registration of new molecules.2
Doctors who favoured generic medicine proposed some measures like generic prescribing and generic substitution with financial incentives both to the prescriber (doctor) and the dispenser (pharmacist). Registration of new generic entities with stringent guidelines and submission of bioequivalence testing for some therapeutic categories were other recommended measures by study participants.

The reintroduction of Generic Medicine Act could be a positive development to promote utilization of generic alternatives provided the doctor is well-informed about the quality and efficacy of generics during their academic and professional career.

The authors would like to thank Universiti Sains Malaysia for funding this project. The principal author would also like to thank Hafiz Aziz ur Rehman PhD candidate, College of Law, Australian National Univeristy, for his invaluable intellectual suggestions throughout this project. The authors would also like to thank all the dispensing doctors who agreed to participate in this study. The principal author is grateful to Dr Saman Nadeem, a final year medical student, Dow Medical College, Dow University of Health Sciences, for helping in the execution of this project.