Total 43 patients with T2b-T4N0M0 muscle invasive bladder cancer were accrued to receive neoadjuvant chemotherapy following maximal TURBT prior to concurrent chemoradiation during July 2006 to January 2007. These patients were followed till January 2010.
Inclusion criteria were defined as; (1) histological proven muscle invasive transitional cell carcinoma of bladder, (2) European Cooperative Oncology Group (ECOG) performance status 0-2, (3) American Joint Committee on Cancer (AJCC) stage T2b-T4aN0M0, (4) Full capacity functioning bladder (5) maximum transurethral resection of bladder tumour (TURBT) at time of neoadjuvant chemotherapy and CCRT(small residual after second sitting of TURBT were eligible), (6) normal haematology; haemoglobin > 10 gm/dl, white blood cells(WBC) > 4000/mm3, platelets > 100,000/mm3 and (7) normal renal functions (serum creatinine < 2.0 mg/dl or creatinine clearance > 60ml/min) and normal electrolyte values. Patients excluded were, (1) any lymphadenopathy or distant metastasis, (2) ECOG status 3-4, (3) no prior chemotherapy, radiotherapy or prior history of malignancy. Hydronephrosis was not an exclusion criteria. Attempts were made to correct renal functions by percutneous nephrostomy (PCN) or urinary diversion.
Neoadjuvant chemotherapy was started within one week of complete TURBT. Patients received cisplatin 75 mg/m2 on day 1 plus gemcitabine 1,000 mg/m2 on days 1, 8 and 15, according to dose regimen by Von der Maase H et al.15 Chemotherapy was repeated every 28 days for three cycles. As antiemetic regimen, all patients received dexamethasone 20 mg in 50 ml saline given as an intravenous infusion over 15 min, 45 min before cisplatin and ondansetron 16 mg as an intravenous infusion over 15 min. The dose modifications of gemcitabine and cisplatin were also calculated.
Concurrent chemoradiation and dose modifications:
Patients underwent CCRT within 6 weeks after completion of neoadjuvant chemotherapy. All patients were simulated on virtual simulator and three dimensional (3D) conformal planning was performed. Radiotherapy was given with shrinking field technique, (1) first phase included whole pelvis, covered by four fields (anteroposterior (AP), posteroanterior (PA), two opposing lateral fields ( right and left lateral) to encompass the entire bladder, prostate, and pelvic lymph nodes. The field borders were at the L5-S1 interspace cephaled, at laterally 1 cm beyond bony pelvis, and the inferior margin of obturator foramen caudally. The dose given was 45 Gy with fraction size 1.8 Gy in 25 fractions, five days/a week, (2) in second phase; field was reduced to cover the bladder tumour volume with 1 cm margin around with multiple fields. The dose was given 20 Gy with fraction size 2 Gy in ten fractions to complete 65 Gy. The maximum dose to the posterior rectal wall and to the femoral heads were kept <55 Gy and <45 Gy, respectively. All radiation was delivered by 6 to 15 MV photons from multileaf collimator (MLC) based linear accelerator.
Patients underwent concurrent chemotherapy with weekly cisplatinum 40mg/m2 or gemcitabine 100 mg/m2 IV prior to radiotherapy for six doses.
During CCRT, dose modifications were also calculated.
Toxicity and assessment evaluation:
During neoadjuvant chemotherapy, records were evaluated for weight, performance status, haematology/chemistry and other related symptoms. During CCRT, for grading the acute side effects (persisting for < 90 days) The National Cancer Institute Common Toxicity Criteria (NCI-CTC) version 2.0, were used.16 The Radiation Therapy Oncology Group (RTOG) Late Radiation Morbidity Scoring Criteria were used to score radiation toxicity that persisted beyond 90 days from the completion of radiotherapy.17
Check cystoscopy was performed when radiotherapy was completed. Patients were considered to have achieved a complete response (CR) if there was no evidence of visible tumour on cystoscopy or if biopsy showed no malignancy. Patients with CR or only superficial tumour (Ta, Tis, or T1) at a new site were followed as bladder preservation. Patients with any residual tumour at the original tumour site or muscle-invasive tumour (T2 or greater) at a new site were considered candidates for salvage cystectomy. During the follow up period, patients underwent check cystoscopy 6 weeks after completion of concurrent chemoradiation, and then every 3 months for first year and every 6 months for following years.
The primary endpoints were the overall survival, disease free survival and the secondary points were the effectiveness of the neoadjuvant chemotherapy, complete response rates, local recurrence and distant metastasis. The times to last follow up evaluation, appearance of local and distant relapse and death were calculated from date of starting treatment. Disease free survival (DFS) was defined as the duration between the entry date and the date of documented disease reappearance, death from cancer and/or last follow-up (censored). Overall survival (OS) was defined as the duration between the entry date and the date of patient death or last follow-up (censored). Probabilities of local and distant control, disease free and the overall survival were determined with the Kaplan-Meier method. The comparisons for various endpoints were performed using log rank test and Cox regression analysis was used to detect any prognostic factors. Statistical analyses were performed using the computer program SPSS (Statistical Package for the Social Sciences, version 17.0, SPSS Inc, Chicago,III, USA).

Patient characteristics are shown in Table-1. 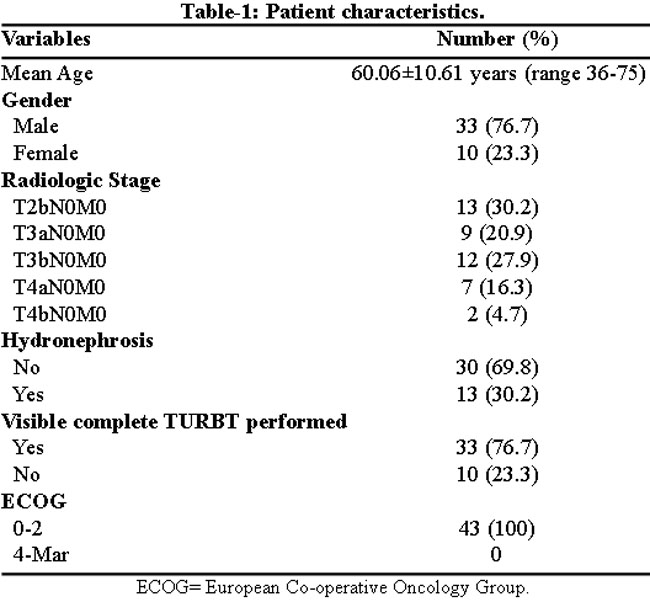 A total of 33 males and 10 females with mean age 60.06 ± 10.61 years (range 36-75) with muscle invasive bladder cancer were treated. Thirty (69.8%) patients were with radiological stage > T3aN0M0. 30.2% patients had hydronephrosis at time of enrollment, for which they underwent percutaneous nephrostomy (PCN) prior to neoadjuvant chemotherapy. Complete TURBT was performed in 33 patients (76.7%) in one or more attempts. All patients had good performance status.
Of 43 patients, 41 completed three cycles of neoadjuvant chemotherapy. Almost all the planned doses of neoadjuvant chemotherapy were administrated. Two patients received only two courses of the chemotherapy owing to grade 4 neutropenia and thrombocytopenia and prolonged recovery. Subsequently these patients were withdrawn from the study protocol. There were two episodes of delay for cisplatinum in two patients because of grade 3 renal toxicity. The neutropenia attributable to neoadjuvant chemotherapy were grade 3 in 6 (14.6%) patients and febrile neutropenia in 2 (4.9%) patients. The frequency of grade 3 toxicity profile was as, thrombocytopenia 4.9%, nausea and vomiting 17.1%, anorexia 7.1% and renal toxicity in 4.8% cases.
Acute grade 3 side effects of concurrent chemoradiation were nausea and vomiting, diarrhoea and cystitis in 15.6%, 18.7% and 18.7% cases respectively. The G4 side effects were only cystitis in 3.7% cases. The weekly cisplatin and gemcitabine was omitted for one course in six patients; however no dose reduction was seen during the course of radiation.
The complete response on check cystoscopy/tumour site biopsy following neoadjuvant chemotherapy and concurrent chemoradiation was seen in 32 patients (78.04%, 95% confidence interval {CI} 62-94). Of 9 patients, who did not achieve CR, 6 underwent salvage cystectomy and 3 were found still inoperable and were treated with salvage chemotherapy.
Late side affects were seen in 6 patients and were mild irritative bladder symptoms. No delayed gastrointestinal or haematological toxicity were reported.
At the median follow-up period of 36 months (24-38months), local recurrences were seen in 3 patients (10%) out of 30 initial complete responders. Two had superficial bladder cancers (pT1, G2) and were treated with complete TURBT followed by intravesical bacillus Calmette-Guerin (BCG). One had muscle invasive cancer, for which salvage cystectomy was performed.
The distant metastases in bones were seen in 2 patients (6.6%); and were treated with salvage chemotherapy, palliative radiotherapy for pain relief and bisphosphonates.
At the time of analysis, 27/41 were alive. Of whom 23(56.1%) were retaining their original bladder and are free of disease. Using the Kaplan-Meier method, the 3 year actuarial survival was 54% (Figure). 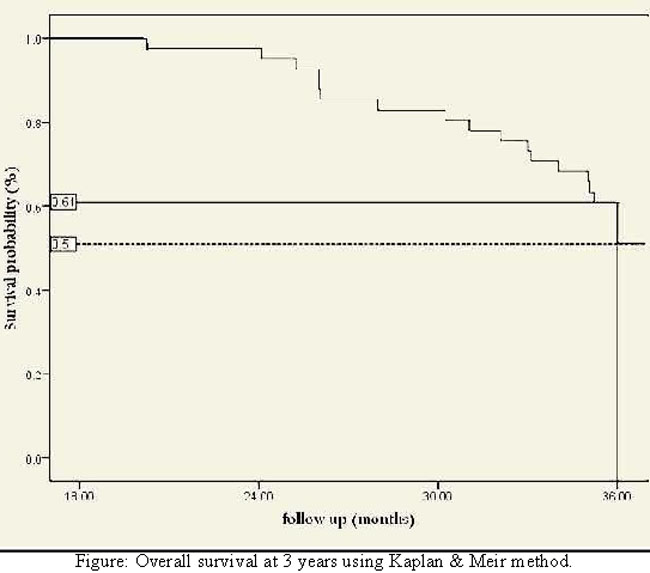 This multimodality regimen of neoadjuvant cisplatinum and gemcitabine based chemotherapy followed concurrent chemoradiation resulted in 3 year survival rate of 61% and intact bladder survival rate 56.1%. The complete response rates, local control and bladder preservation rates were as good as or better than previously published similar trials shown in Table-2.

In the present study, majority of patients were with radiological stage >T3a 70%, hydronephrosis 30.2% and with post TURBT residuals in 23.3% cases, which are generally considered poor candidates for bladder preservation protocols.22,23 Radiological stage >T3a with hydronephrosis is common presentation in our part of the world and constitute major referral for radiation.24 Institutional urologists performed aggressive resections in one or more attempts to accomplish the visible complete TURBTs. We found hydronephrosis, incomplete TURBT and tumour stage as important prognostic factors. However our study did not evaluate the DNA ploidy, tumour grade and HER 2 over expression which are recently considered additional poor prognostic factors.25-27
The improved CR rates (78.04%, 95% CI62-94) in this study could be attributed to better tolerance and completion rates of the protocol as compared to traditionally used CMV regimen by RTOG trials which failed to demonstrate the benefit of neoadjuvant chemotherapy. Contrary Lin CC, et al reported better CR rates, lower local recurrences, distant metastasis and better bladder preservation with newer cisplatinum and 5-flourouracil ± paclitaxel based neoadjuvant chemotherapy.17
However our study had few limitations. (a) Interval cystoscopy immediate after neoadjuvant chemotherapy was not carried in our patients (b) complete response rates were not separated after neoadjuvant chemotherapy and CCRT (c) salvage cystectomies were carried out in few patients, justification could be the religious and socioeconomic factors.
Though not powered enough and with short follow up period, this trial of cisplatinum and gemcitabine based neoadjuvant chemotherapy followed by concurrent chemoradiation has shown encouraging results in bladder preserving approach, however a large randomized, multi-institutional prospective trial is warranted.

We are thankful to Dr. Adibul Hasan Rizvi for providing us state of art radiation oncology department offering its services to poor patients free of cost with dignity.