Objective: To elaborate in detail the technique of intracoronary administration of autologous bone marrow stem cell transplantation in patients with acute myocardial infarction.
Methods: This procedure was carried out during a pilot study which was conducted in the department of interventional cardiology of Armed Forces Institute of Cardiology/National Institute of Heart Diseases Rawalpindi from June 2004 to November 2006. The inclusion criteria\'s were recent anterior myocardial infarction with anteroapical hypokinesia and single vessel disease in left anterior descending artery. The informed consent was obtained. After giving local anaesthesia and light sedation, both posterior superior iliac crests were accessed by multiple punctures to get stem cell harvest. The harvest was analyzed to document total and mean mononuclear cell count. An over the wire balloon catheter was parked in mid left anterior descending artery. The stem cells were injected intermittently into the infarcted myocardium during transient balloon inflation over 45-60 minutes.
The clinical, left ventricle cineangiographic and nuclear scintigraphic parameters were analyzed and compared at week 0 and 12 to objectively document the effects of stem cell.
Results: The procedure was successfully carried out and well tolerated by all the patients. The minor complications were managed accordingly. Post autologous stem cell therapy, there was amelioration in clinical symptoms, left ventricle ejection fraction and myocardial perfusion.
Conclusion: Intracoronary artery infusion of stem cells in acute myocardial infarction is simple, reasonably safe and effective mode of cell delivery in our set up.
Keywords: Bone Marrow Stem Cell, Intracoronary Artery Infusion, Myocardial Infarction.(JPMA 61:3; 2011).

Cardiac stem cell therapy is currently investigated as an adjunctive therapy to promote regeneration of infarcted myocardium.1 Different types and routes of stem cell delivery have been used in clinical practice to repair infarcted or ischaemic myocardium.2 Of these, percutaneous administration of bone-marrow-derived progenitors represents the most optimal method to date, as it allows the evaluation of the cell\'s effects, independent of revascularization and the application of multiple administrations over time.3
The aim of this article is to describe in depth the technique of intracoronary administration of autologous stem cell into the infarcted myocardium, an intracoronary transplantation of stem cells is a simple, safe, effective and potentially adaptable technique in experienced hands in our set up.

Twenty six male patients underwent this procedure. An informed written consent was obtained. The patients were laid down in left lateral position and were given light sedation. Local anaesthetic agent was infiltrated in both posterior superior iliac crests. A clinical haematologist performed multiple aspirations to both iliac crests to get sufficient amount of bone marrow stem cell harvest (Figure-1). 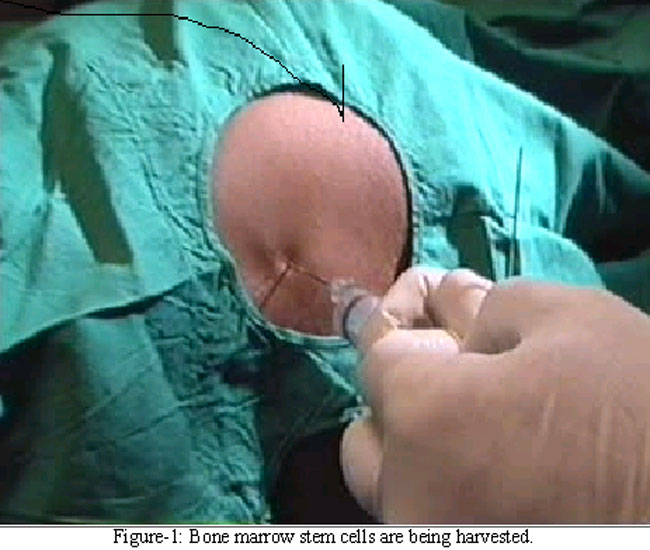 The harvest was passed twice through micro filters and then kept in a bag containing CPD-A (Citrate Phosphate Dextrose-Adenine) as an anticoagulant and preservative. The total leukocyte [(mean ± SD) x 103/µ L - 23.54±7.47], total mononuclear cells [(mean ± SD) percentage - 45.69±6.12] and mean mononuclear cell counts [(mean ± SD) x10 /kg - 14.75±14.56] were determined in the harvest after centrifugation and analysis.
Left heart catheterization via femoral arterial access was performed in all the patients. Baseline left ventricle cineangiogram was performed in Right Anterior Oblique (RAO 30º) and Left Anterior Oblique (LAO 50º) projections using same amount of dye 30/15 millilitres with help of power injector to document LV function. A guide wire was parked in the distal part of the left anterior descending artery through a standard 6 French guiding catheter. Unfractionated heparin was used according to same protocol as in any other coronary intervention.
A stop flow technique (Figure-2) 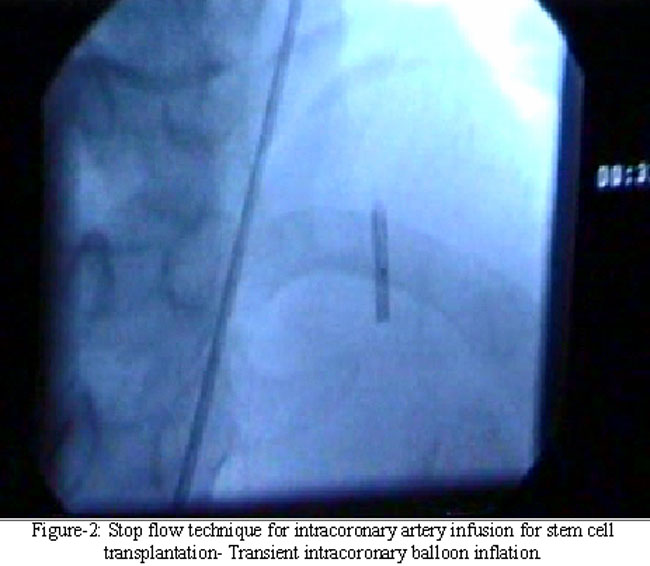 was used to deliver stem cell harvest into the damaged myocardium. During this technique the balloon was inflated intermittently (Up to six times, lasting for three minutes) at low pressure. About 40-50 milliliters of stem cell harvest was slowly injected during low pressure balloon inflations of the short over-the-wire balloon catheter (2 ×10 mm with central lumen, Sprinter- Medtronics) which was placed in mid left anterior descending artery above the border zone of the infarction. To maximize contact time of bone marrow cells with the microcirculation of the infarct-related artery, the balloon remained inflated for 3 minutes. It takes about 45-60 minutes to complete the procedure.
Finally check injections were given to demonstrate unchanged coronary anatomy of the intervened vessel. The patients were monitored for occurrence of chest pain and disturbance in haemodynamic parameters and rhythm pattern during the procedure (Figure-3). 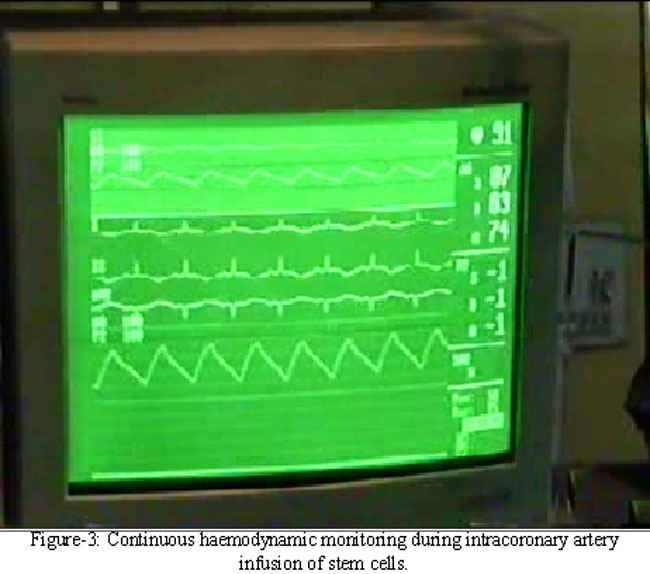 For next twenty four hours, the patients underwent continuous cardiac monitoring and laboratory testing for serial cardiac enzymes. The patients were discharged home with advice to continue standard conventional medical therapy and have fortnightly follow up.
The status of clinical symptoms, left ventricle ejection fraction by LV cineangiogram and myocardial perfusion by nuclear scan (Adenosine Technetium MIBI (Methoxy Iso Butyl Isonitrile) were analyzed and compared at week 0 and week 12 to document the effects of stem cell transplantation. The standard software\'s provided by Siemens Hi cor Top and Gated Spect were used to compare the baseline and final parameters respectively. A total of 16 patients in LV cineangiogram and 10 patients in nuclear MIBI scan arm have been studied. The SPSS version 10 was used for statistical analysis of the data.

The procedure was generally well tolerated by all the patients, except for a few minor complications like LAD spasm (2 cases), Transient chest pain and ST/T depression during balloon inflation/stem cell infusion (5 cases), Chest pain with transient distal LAD occlusion (1 case), Cardiac arrest (1 case), LV thrombus (2 cases), Bradycardia (2 cases), Atrial and ventricular ectopic (2 cases) Ventricular tachycardia (2 cases). All of these incidents were managed aggressively by the experienced operators according to the standard protocol.
The symptoms improved from score of 2 to 8 on visual analog scale. Left ventricle ejection fraction augmented from 40 to 46% in RAO 30º projection (p 0.01) and from 57 to 60% in LAO 50º view (p-ns). As per follow up Myocardial MIBI scan, there was significant improvement in myocardial perfusion in six cases, moderate in two and no improvement in two cases.

There are many modes of stem cell delivery for myocardial regeneration, as transvascular approach (intracoronary artery infusion, intravenous infusion), direct injection in the ventricular wall, transendocardial injection, transepicardial injection and transcoronary vein injection.
The goal of any cell delivery is to transplant sufficient number of cells into the myocardial region of interest and to achieve maximum retention of cells within that area. Retention may be defined as the fraction of transplanted cells retained in the myocardium for a short period of time (hours). The local milieu is an important determinant of cell retention, as it will influence short-term cell survival. Transvascular strategies are especially suited for the treatment of recently infarcted and reperfused myocardium when chemo attractants and cell adhesion molecules are highly expressed.
During intracoronary artery infusion, cells are delivered to the heart via an over-the-wire balloon catheter.4 Selective intracoronary application delivers a maximum concentration of cells homogeneously to the site of injury during first passage. It also allows for a more even distribution of cells throughout the infarct region,5 potentially explaining lack of arrhythmia generation after transplantation. This is in contrast to direct myocardial injection, which may lead to "islands" of cells in the infarcted myocardium, providing a substrate for electrical instability and ventricular tachyarrhythmia.6 Because coronary flow impairment and myocardial cell necrosis are possible, the quantity of cells and duration of infusion must be carefully determined.7 Strauer et al4 administered bone marrow cells in the clinical setting via intracoronary injection and found that infarct size, coupled with an increase in stroke volume, was reduced after 3 months. Other groups have also shown that the intracoronary injection of stem cells is beneficial to heart function as it adequately delivers the cells to the desired area.8,9
Intravenous administration of stem cells is an attractive and practical mode of delivery because it does not require cardiac surgery or catheterization.10 IV administration of cells is the easiest mode of delivery; however, the main disadvantages are the length of time that it takes for the cells to migrate to the site of the injury and the ability of the cells to survive and come to the site of injury during this time frame.
The transendocardial and transepicardial modes of delivery of stem cells have been used in large animal experiments11 as well as in the clinical settings.12 The main advantages to these types of delivery are the direct visualization of injection to the affected area and an even distribution of the cells. Direct intramyocardial injection may require fewer cells to achieve engraftment compared with intracoronary or intravenous administration. Currently, the clinical use of catheter-based transendocardial injection is limited to one injection system, using electromechanical mapping to generate a three-dimensional LV reconstruction before the injection; however, this technique may induce arrhythmias including ventricular premature beats and ventricular tachycardia.13