Health equity, quality of care and community based approaches are key to maternal and child survival in Pakistan

Pakistan experiencing 30,000 maternal deaths per year and 420,000 under 5 child deaths per year is among the six countries in the world which contribute to 50% of maternal deaths (India, Nigeria, Afghanistan, Ethiopia, and the Democratic Republic of the Congo are the other five).1
Maternal mortality ratio of 276 per 100,000 live births in Pakistan [PDHS 07] has wide rural urban difference (319 for rural and 175 for urban areas).2 In addition to the well known rural-urban divide, differences in terms of wealth quintile are quite striking. Adjusted probabilities of deliveries by skilled provider are 25% for poorest quintile and 63% for richest quintile.3 Under 5 child mortality rate in Pakistan is 94 per 1000 live births,2 infant mortality rate 69 per 1000 live births4 and neonatal mortality rate 54 per 1000 live births,2 but what is striking is the wide difference in mortality in terms of wealth quintile (Figure-1). 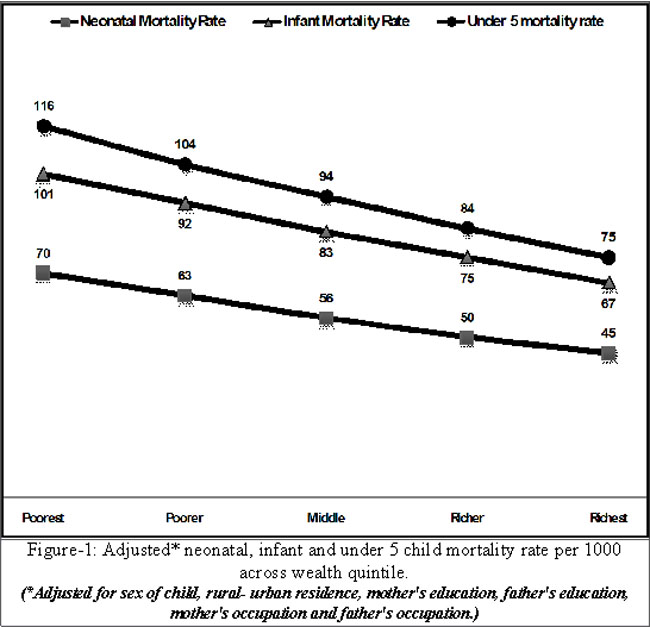 Millennium development goal (MDG) 4, targets child health and goal 5 targets maternal health. By the year 2015 Pakistan targets to bring maternal mortality ratio to 140 per 100,000 live births, proportion of births attended by skilled health personnel to greater than 90% (39% reported in PDHS 2006-07)Error! Bookmark not defined., contraceptive prevalence rate to 55% (30% reported in PDHS 2006-07), proportion of fully vaccinated children 12-23 months of age to 90% (47% reported in PDHS 2006-07), infant mortality rate to 40 per 1000 live births and under five child mortality rate to 45 per 1000 live births.
The concept of horizontal equity is: "Equity in health services implies that there are no differences in health services where health needs are equal," while the concept of vertical equity is, "that enhanced health services are provided where greater health needs are present."5 Women and children in the lowest quintile of wealth index need greater attention in terms of health care services as the evidence provided above speak of their greater health needs.
A number of programmes are underway to tackle the problem of maternal and child ill- health in Pakistan. National programme for family planning and primary health care (LHW programme), National Maternal Newborn and child health programme (MNCH) and Punjab Millennium development programme are some of the programmes at the government level. UN agencies, donors and partners are assisting Pakistan with funds and technical expertise to address maternal and child health issues. The National MNCH programme is endeavoring to fill the gaps in maternal and child health domain by training and deploying 12000 community midwives, particularly in rural areas, to raise skilled birth attendance rate. This programme is training health care providers across the country in IMNCI, EmONC, ENC, IMPAC, Family planning counseling and Family planning surgical methods. In addition it is upgrading 112 DHQ, 122 THQ hospitals in the country to provide Emergency Obstetric and neonatal care services, 15 DHQ, 48 THQ hospitals and 599 RHCs and civil hospitals to provide Basic Emergency obstetric and neonatal care services.6
The vital question is would all these efforts lead to greater utilization of public health facilities in the country and whether we would be able reach the un-reached, that is the poor and the disadvantaged (poorest quintile). According to PDHS 2006-07, only 34% of births in Pakistan take place in a health facility; 11% in public sector health facility and 23% in private sector health facility.2 The issue of increasing the utilization of public sector health facilities and taking the private sector on board through regulation introduced by health policy are the need of the hour. Having said that greater utilization of both the public and private sector health facilities is possible by raising the confidence of the people through introduction of quality of care measures. Quality of care needs to be regulated through accreditation of health facilties. This is again a policy decision and once this policy decision is made, benchmarking quality of care in public and private health facilities and developing a sound system of monitoring quality of care through regular supervisory visits would have to be mandated. Discontinuation of health facilities with below standard services would go a long way in improving quality of health care services in the country.
Isn\'t there a great possibility that having done all this good work, the poor and marginalized would still not be able to access these services due to a variety of reasons, some of them being lack of access to health facilities, lack of awareness about available facilities and above all lack of finances. As documented in the statistics above and Figure-1, the greatest burden of ill-health is among the poorest quintile. It makes perfect sense that reductions in disease burden in this group of people would have relatively larger impact on national disease burden scenario. This has been documented in the case of Srilanka,7 where a third of the population are estimated to live below the national poverty line, maternal morality ratios (44 per 100,000 births in the year 2005) and under-five mortality rate (13 per 1000 in the year 2000) are amongst the lowest in the developing world. All of this was possible due to pro-poor approaches such as free provision of health services to all and provision of maternal and child health care services at the community level resulting in 96% skilled birth attendance rate.7 Policy decisions such as provision of free maternal and child health care services in Pakistan, demand side financing schemes such as voucher schemes and other measures to support the poor and vulnerable are urgently needed.
Pakistan with a predominantly rural set-up, community empowerment would go a long way in health services utilization through village committees. Identification of deserving and the needy families, village fund generation and maintenance, establishing community transport system for emergency transport to health care facilities are the actions which the district/union council authorities should pursue without further delay. All these community actions would strengthen the actions being taken by the government in improving maternal and child health care services in the country.
Whatever the case may be the poor/disadvantaged have to be reached and fully supported to avail maternal and child health care services at public and private sector health facilities. Developing and implementing a sound monitoring system to ensure that the un-reached are continuously being reached and that they are being provided quality services at no cost, is needed. Only then we could be confident about attaining Millennium development goals for Pakistan.