Cholestasis with Hepatic Fibrosis secondary to Sarcoidosis - A Case Report

Sarcoidosis is a chronic granulomatous disease of unknown etiology occurring world wide1. The problem of diagnosis of sarcoidosis in a country like Pakistan is two fold: lack of awareness of its existence and difficulty in differentiating it from the highly prevalent tuberculosis with which it shares many clinical and pathological features. It can affect almost any organ. We present a case with one of the rarer manifestations - cholestasis with hepatic fibrosis. To our knowledge this is the first such case being reported from Pakistan.

A 64 year old male, retired banker presented in our clinic in May 1999 for evaluation of a 5 year history of weight loss and abnormal laboratory results. He was a known hypertensive. He started noticing weight loss in 1994; over a period of a few months his weight decreased from 55-60 kg to 40 kg. He denied persistent fever, night sweats, cough, shortness of breath, change in appetite, diarrhea, lack of energy, joint pains or skin changes. He spontaneously regained some weight in 1995 and had an extensive work up over.the years as shown in Table 1. 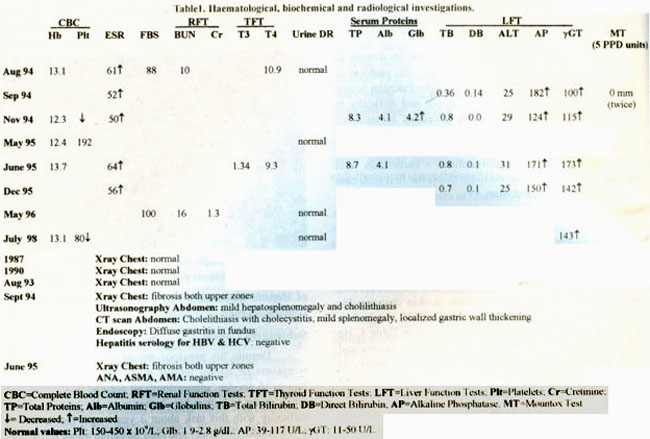 He had persistently elevated ESR, Alkaline Phosphatase and yGT with negative MT. He denied any previous history of jaundice, blood product transfusion or contact with active TB. He was a non-smoker and was not taking any medicines currently: he had used Beta Blockers and ACE­I in the past for his hypertension.
On examination he did not look sick, was anicteric and weighed 45 kg. He had finger clubbing but no evidence of chronic liver disease: the examination of his chest, heart, skin and lymphatic system was normal. He had non-tender hepatosplenoniegaly without ascites or pedal edema. His work up at this stage again showed elevated ESR. Alkaline Phosphatase and yGT with negative MT (Table 2).

An HRCT of the chest confirmed diffuse interstitial disease (Figure 1). 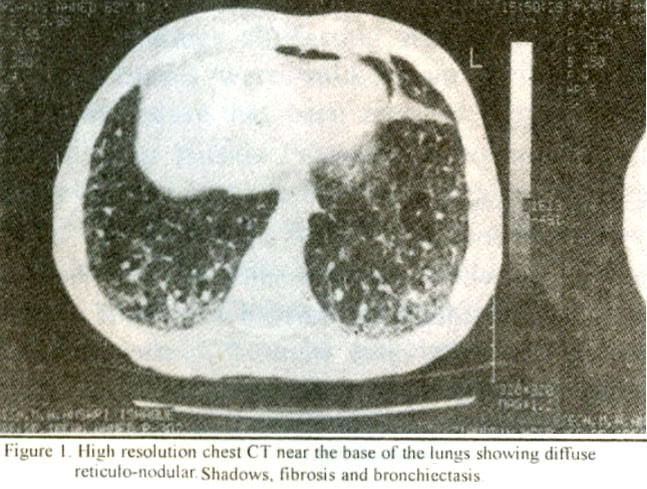 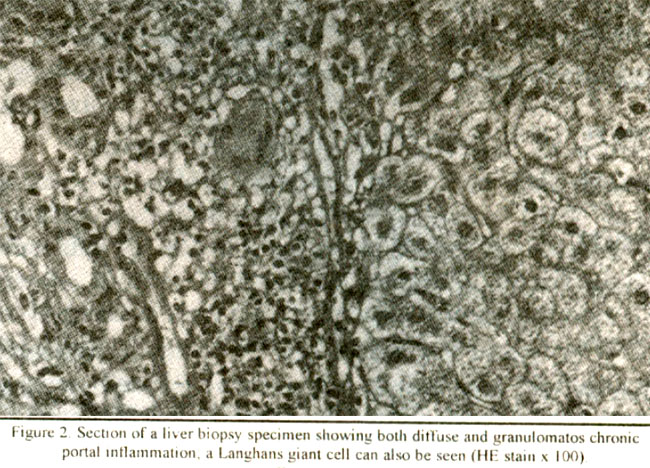 A diagnosis of Hepatic Sarcoidosis was made and he was started on systemic steroids.
Subsequent Course
Despite his previous denial of any constitutional symptoms lie started feeling much better and his weight increased to 50.5 kg. His ESR (9mm) and Alkaline Phosphatase (104 IU) - though not his yGT - declined rapidly to normal. Interestingly he noticed that lie found it much easier to button his clothes now. He had developed difficulty with this task about 3 years ago, had a normal nerve conduction study and then forgotten about it. He only recalled it now when he noticed a sudden improvement. The possibility of sarcoid peripheral neuropathy can not be ruled out.

Diagnosis of sarcoidosis (of any organ) is essentially a diagnosis of exclusion1 there are no pathognomomic tests. Elevation of serum ACE (SACE) level (normal value 8-52 U/L) is only useful when either it is normal (high negative predictive value) or markedly elevated i.e. > 100 U/L (high positive predictive value)2. Kviem-Siltzbach test has a sensitivity greater than 60%3 and specificity approaching 95%4 hut the material is not easily available and the test is not recommended1.
Asymptomatic, clinically insignificant hepatic granulornas are very common in sarcoidosis with an incidence of 40-70%1,5. When clinically significant liver involvement occurs, there are usually three well recognized patterns: chronic intrahepatic cholestasis, portal hypertension and Budd-Chiari Syndrome5. Ilepatic granulomas have a broad differential diagnosis (Table 3). 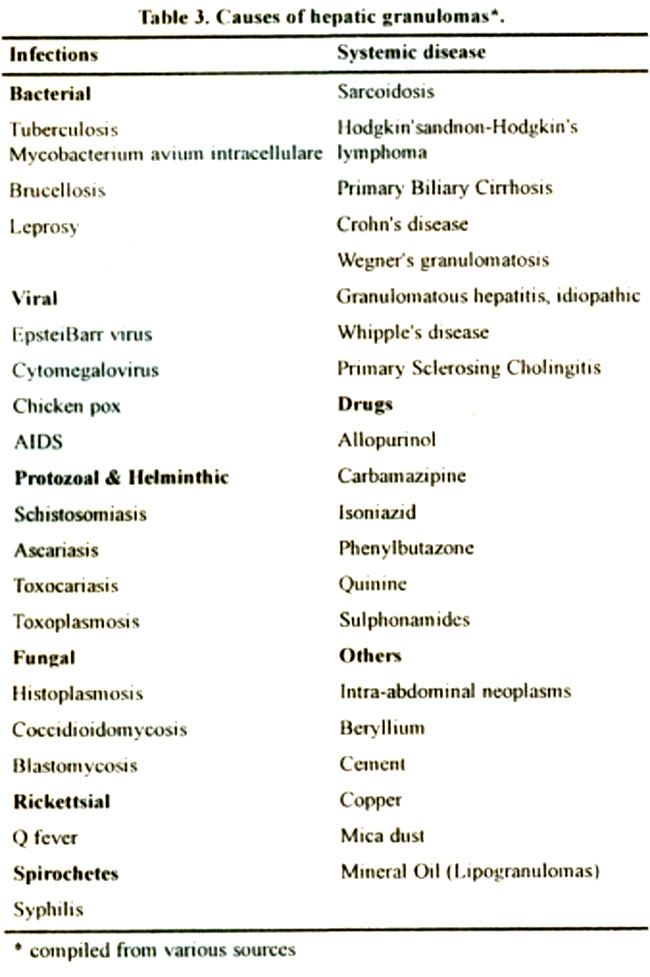 In a small series of’ hepatic granulomas reported from Pakistan, the incidence of sarcoidosis was 7,4%6. in a similar series of 88 cases from USA. the incidence of sarcoidosis was 22%7.
Although no bacterioIogical cultures were done in our patient. we made the diagnosis of sarcoidosis on the basis of the features of a systemic disease with weight loss, diffuse lung involvement with persistently negative PPD reaction and repeatedly negative AF’B smears, an elevated SACE level with cholestatic granulomatous liver disease in the absence of an alternative diagnosis (negative ANA, AMA, SMA, HBV and HCV serology and absence of evidence of hemochromatosis). We did not perform AFB culture (a test with low sensitivity) and ANCA-P to rule out Primary Sclerosing Cholangitis (in view of lack of Magnetic Resonance Cholangiopancratography or pathology findings suggesting this diagnosis). Other infectious causes were unlikely on clinical grounds. Sarcoid cholestasis has been reported frequently in the literature from outside Pakistan8-10. Necroinflammatory changes (as seen in our patient) have been reported in up to 41% of the patients9. Hepatic fibrosis has also been described9,11. The other common cholestatic diseases -Primary Biliary Cirrhosis and Primary Sclerosing Cholangitis - may both be associated with granuloma formation; the differentiation from sarcoidosis may be difficult and is based on other clinical features, serology and Kviem Test3,12 ; in fact an overlap syndrome of Primary Biliary Cirrhosis and Sarcoidosis has been suggested,3. Although involvement of the lung and hilar nodes has been the most common presentation of sarcoidosis in Western patients, a number of studies have indicated ethnic variations in the severity and pattern of organ involvemen14-18. The pattern of organ involvement in sarcoidosis and especially the prevalence of clinically significant hepatic disease in Pakistani population remains unknown.
Systemic steroids are the mainstay of active, systemic sarcoidosis especially in patients with clinical variables associated with poorer prognosis: Black race, onset after age 40 years, symptoms present for more than 6 months, absence of Erythema Nodosum, splenomegaly, involvement of more than three organ systems and stage Ill pulmonary disease19,20. Our patient had several of these features. Steroids improve the clinical and biochemical features without evidence of benefit for the long term outcome21; they do not reverse the fibrosis22. Several other drugs have been anecdotally reported as useful including Methotrexate and Cyclosporine’ .Chloroquin has been used as steroid sparing drug in Hepatic Sarcoidosis with some success23.
Our patient was symptomatic with cholestatic sarcoidosis for five years before the diagnosis. This highlights the importance of considering sarcoidosis in the differential diagnosis of chronic cholestasis with systemic features.