The fibromatoses are a heterogeneous group of soft tissue lesions sharing common histological features. They are non-metastasizing fibroblastic tumors, which tend to invade locally and may recur after surgical excision. They have been classilied as infantile fibromatoses and adult fibromatoses. Infantile fibrornatoses exclusively occurs in infants and young children under 2 years of age. They usually present as a palpable mass beneath the skin and are most common in the region of axilla, upper arm and shoulders. Scalp and neck are other favored sites. We are presenting a case of infantile fibromatosis in a newborn baby.

A 10 days old male baby presented with a firm swelling in the left side of neck. The swelling was present since birth and was progressively increasing in size. The size was 4x5 cm and it was fixed to the deeper structures. CT scan showed a 4.8x5crn soft tissue mass with intracranial extension. Fine needle aspiration cytology of the mass was performed which suggested it to be fibromatoses. kxploration was performed under general anesthesia. 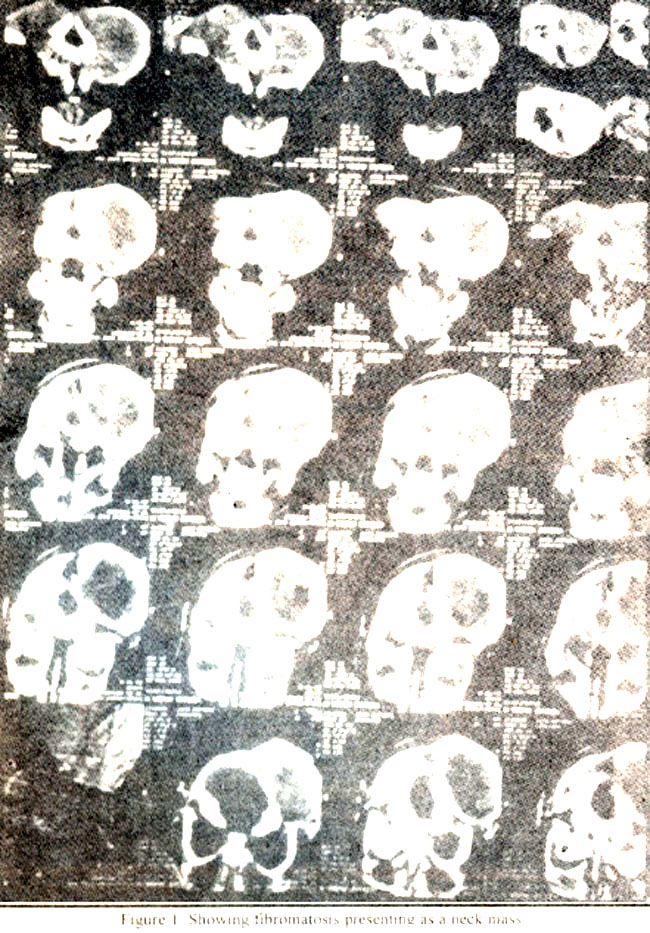 Per-operative findings were a firm mass in the left side of neck invading the left occipital and parietal bones. Dura was luckily spared. 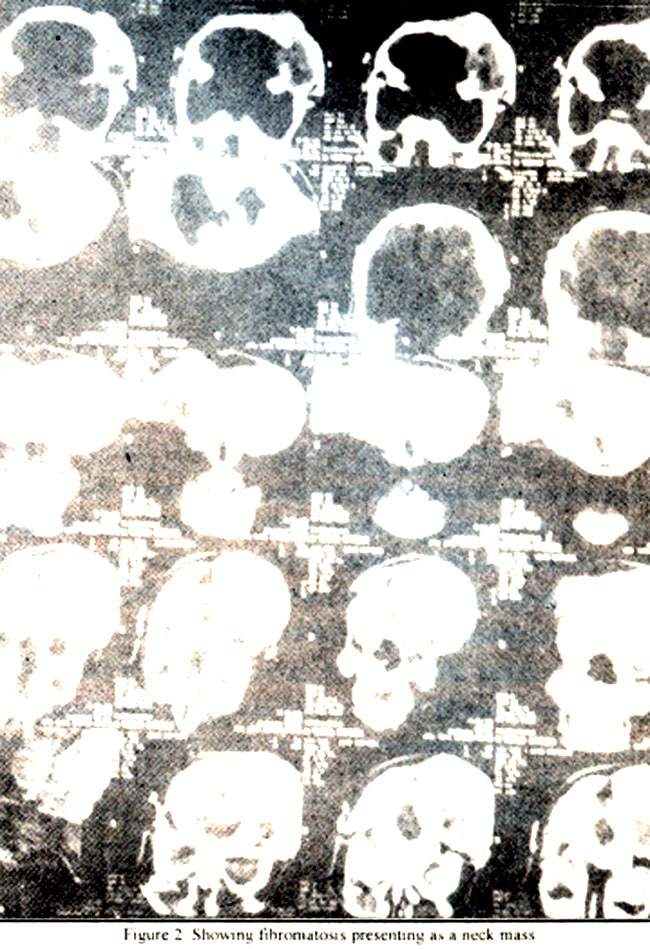 Excision of the mass was performed along with about one centimeter rim of normal bone. 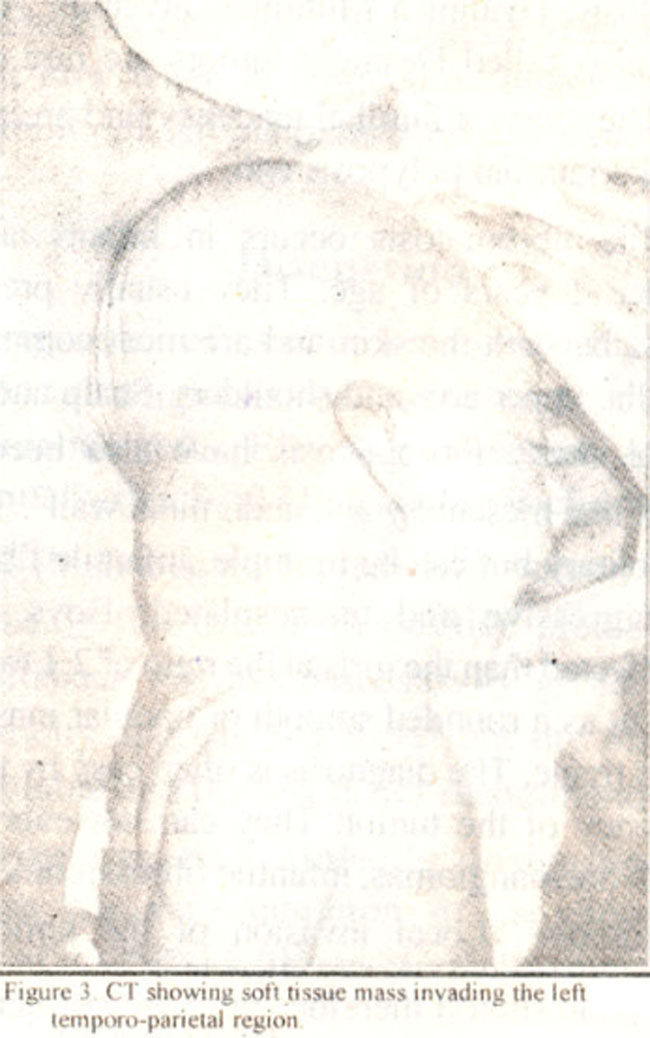 Dura was intact and the bony defect was left as such. Facial nerve was identified by the nerve stimulator and was saved. Postoperative recovery was uneventful and the baby was discharged home in satisfactory condition. Histology of the mass reconfirmed it to be infantile fibromatosis. After nearly three months follow-up there was no evidence of recurrence, as these tumors are notorious for local recurrences.

The tibromatoses are a heterogeneous group of soft tissue tumors sharing common histological1. They are fibro-myotibroblastic in origin haying abundance of fibrous and smooth muscle stoma. They are also called myofibromatoses due to the same reason. They are non-metastasizing tumors, which tend to invade locally and have a tendency to recur after surgical excision1,2. They have been c lassi tied as infantile ti brom atoses and adult fihromatoses3. There is lot of controversy about the nomenclature and classification of libromatoses. Infantile fibromatoses includes fibrous hamartoma of infancy. Fibromatosis Coli, Diffuse in fantile Fibromatosis, Juvenile aponeurotic tibroma, digital fibrous tumor of childhood, Congenital Generalized Fibromatosis, Congenital Solitary Fibromatosis, Hereditary gingi va I tibromatosis, Juvenile Nasopharyngeal Angiofibroma and Fibromatosis. Hyalinica Multiplex Juvenilis. Aggressive tibromatosis also called Desmoid tumors are rare childhood tumors1,4,5. They have a familial tendency and are associated with lesion like familial polyposis coli.
Infantile tibromatosis occurs in infants and young children under 2 years of age. They usually present as a palpable mass beneath the skin and are most common in the region of axilla. upper arm and shoulders. Scalp and neck are other favored sites6. Fibromatosis have also been seen in unusual areas like mesentery and abdominal wall7. The lesion are usually solitary but can be multiple. Infantile fibromatosis is locally aggressive and uncapsulated. Boys are more commonly affected than the girls in the ratio of 2:1 to 3: 1. They usually present as a rounded smooth or nodular masses in the subcutaneous tissue. The diagnosis is often easy by the firm to hard consistency of the tumor. They can however easily be confused with haemangiomas. infantile fibrosarcoma and other soft tissue tumors2. Local invasion of the tumors to the adjacent structure occurs early in the course of events. Fixation to the tissue and bone should therefore raise the suspicion of fibromatoses4. Diagnosis can easily be confirmed by tine needle aspiration cytology of the tumors. Invest igations like CT scan and MRI can help in assessing the degree of local invasion. Surgical resection is curative in most cases if an adequate margin of resection of normal tissue is taken4,9. However 10 to 30% cases will have a local recurrence. In one series nearly 75% patients had a recurrence if margin of resections were positive for residual tumor4,10. Therefore a close follow-up is necessary in the these patients. Sponataneous regression of the tumor can occur in few cases2. Some resistant tumors with recurrences may need local radiotherapy or chemotherapy9,11.
Malignant tumors of fibroblastic niyofibroblastic tissue also occur but are much less common1,3.They have also been classified as infantile and adult type of fibrosarcornas. They are recognized histologically by the abundant mitoses and anaplasia. The infantile fibrosarcomas have a less aggressive behavior. Even then the local invasion is early and complete resection is often not possible causing recurrence in nearly 40% of cases. Distant metastasis occurs only in 5% patients. Five years survival of fibrosarcomas is more than 80% however often it is difficult to predict the outcome in these patients.
In summary fibromatoses are rare but interesting tumors in children. They may present at any age. They have an unpredictable behavior and have a tendency of local recurrence. The incidence of local recurrence can however be reduced to minimal if tumor free margins of resection be achieved. Prognosis is very good and even difficult local recurrences can be treated with either wider excision, radiotherapy and chemotherapy.

Cholestasis with Hepatic Fibrosis secondary to Sarcoidosis - A Case Report