Objective: To audit the prescribing practices of consultants.
Design: A randomized sample survey of 354 consultants prescription for analysis of some basic parameters as recommended by World Health Organization (WHO)2.
Main Outcome Measures: To provide feedback to the prescribers for promoting rational drug therapy.
Results: The average number of drugs for prescription were found to be 4.51 and the average daily cost of prescribed drugs was Rs: 133.41. The antimicrobials, vitamins/minerals and injections were over-prescribed. About half of the prescribed drugs were from the National Essential Drugs List of Pakistan (NEDLP)2 and only a little over 12% were prescribed by their generic names.
Conclusions: The prescribing practices of the consultants in Karachi are rather liberal and not rational. Overuse of antimicrobials and injections have been observed and there is general tendency of indulging in polypharmacy requiring continued medical education (JPMA 51:74; 2001).

Drug therapy is a highly specialized field; even an educated consumer is unable to prescribe medication for himself/ herself and is dependent on the advice of a physician3. The most frequent medical intervention performed by a doctor is the writing of a prescription4 and he/she has the freedom to prescribe whatever drugs are necessary. All the drugs are chemical poisons and they must be used with utmost caution, The irrational use of drugs by both prescriber and consumer is in fact a global problem which can be assessed by a standardized method of prescription analysis. For this purpose World Health Organization (WHO) have recommended minimum five core indicators which can give an idea about the quality of a prescription and provide uniform parameters for comparative analysis of prescriptions collected from various health facilities/countries. These parameters include the number of drugs per prescription and percentage of generic drugs, antibiotics, injections and drugs from National Essential Drug List (NEDL) in the total analyzed prescriptions1.
The healthcare cost in general and drugs cost in particular, are rising every where and most of the increased cost of drugs throughout the world is due to the use of new medicines5 and Pakistan is no exception. Although new is not necessarily better but many clinicians continue to prescribe the new and the more expensive drugs as first line therapy6. Scarce financial resources are spent on un­necessary nutritional supplements mostly by prescribing vitamin preparations and nearly half of prescribed medicines are tonics and antacids which according to prescribers act as placebo7. Thus routine addition of multivitamins in the prescriptions contribute to polypharmacy8 as well as to raising the cost of prescribed drugs.
There may be striking variations in the patterns of drug use from country to country and in different areas of individual country9. The consultant doctors play the role of trainers of future prescribers10. In our region private practitioners are often preferred to the government-funded health centers where free medical supplies are limited and prescribers are transferable resulting in patients encounter with different prescribers on the subsequent follow up visit11.
We have carried out a prescription audit of consultants who practice at their private chambers in Karachi on the basis of five core indicators recommended by WHO1 along with two more areas of prescriptions, that is the percentage of vitamins and minerals and daily drug cost per prescription, with the aim to examine the extent of irrational prescribing, if any and to provide feed back to the prescriber for the promotion of rational drug therapy.

The study was conducted in Karachi from February 1998 to April 1998. Karachi, which is located in the southwest, is the largest seaport and most populous city of Pakistan, having five administrative districts and population of more than 12 millions. It has an average standard of living that allows reasonable access to medical care.
The consultants, whose 354 prescriptions were analyzed in this study, were from different surgical and medical disciplines, having postgraduate qualifications of diplomas and or degrees in their respective specialty. Most of them are attached with undergraduate and postgraduate teaching hospitals where they work during the morning and provide consultation during evening hours on charging their consultation fee at their private consultation chambers. Their patients are mostly residents of Karachi but some patients from other parts of country also visit Karachi’s consultants for their ailments/treatment.
It is reported that prescribers may change their prescribing practices when they are aware that these are being observed12. Therefore, we randomly collected the photocopies of’ the prescriptions without the knowledge of the consultants with the consent of bearer of prescription when they visited pharmacy shop for purchasing prescribed medicine. Thus the prescriber at the time of prescribing was unaware that hisher prescriptions are being analyzed and in this way their usual prescribing pattern could be monitored.
Each prescription was analyzed for following parameters:
Total number of drugs in the prescription, number of drugs prescribed by generic names, number of antim icrobials prescribed, number of injections prescribed, number of drugs prescribed from National Essential Drugs List of Pakistan (NEDLP)2, number of vitamins/minerals prescribed and approximate daily drug cost.
The analysis of antibiotics in the prescription is one of the five basic core indicators recommended by WHOI. In our study the term antimicrobial is being used to refer to the broader category of antibiotics, sulfonamide drugs and antiprotozoal drugs. However antibiotics used for tuberculosis and leprosy or for cancer chemotherapy were not included in this category because these are the specific areas and are not likely to be over prescribed.
The combination preparation of drugs were considered as single drug and grouped according to their main constituents. If all the constituents of the combination drug were found enlisted separately in •NEDLP, it was considered as a drug from NEDLP. For calculating the cost per day, the prices were obtained from “Drug Index”13 and the prices whose cost was not mentioned in drug index, were obtained from pharmacy shops. In the few prescriptions dosage schedule of drugs was not mentioned. The cost of such drug was calculated on average usual daily dosage, while for drugs prescribed on SOS basis the cost of single dose per day was considered.

A total of 196 drugs were prescribed by their generic names accounting for 12.26 % of the total prescribed drugs (TPD) as shown in Table 2. 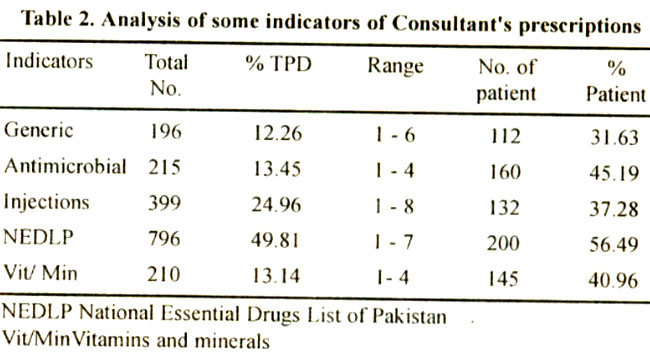 Prescribing drugs, should not be taken lightly, because even the so-called innocent drugs have inbuilt risks, which may not even be foreseeable14. In our study of consultant’s prescriptions, the average number of drugs per prescription was found to be 4.51(Table 1) which is higher than of Nawabshah (3.97/prescription)15 and compared to that reported from Nepal (3.4)16. It is much higher than reported for Rawalpindi/ Islamabad (2.97)17, South Africa (2.6 )18 and Bangladesh(l.44)19. Thus our study reflects a greater trend of polypharmacy.
The generic drugs are usually cheaper than equipotent branded drugs18. In our present study the consultants of Karachi prescribed 12.26 % of the TPD by their generic names (Table 2) which is almost in the same range as reported in earlier studies of Hyderabad (12.06%)20 and Nawabshah (12.9%)15 but lesser than reported from Rawalpindi/Islamabad (23.61%)17. In Bangladesh 78%19 of the drugs are prescribed by their generic names while only 7% are prescribed in Nepal16. These figures indicate that prescribing of drugs by their generic names is widely variable and is still not popular among consultants of our country. The reason for prescribing drugs mostly by brand names may be the availability of some brand name drugs at the same price as those by generic name21, nonavailability of generic equivalents for some newly introduced drugs18 and also the doctors perception that brand name drugs are more reliable.
Overuse of antimicrobials is wide spread across geographical areas throughout the world. However, in developing countries antibiotics are the most common drugs sold and frequently misused22 resulting in increased rate of emergence of drug resistant organisms. In our present study the prescribed antimicrobials constitute 13.45% of TPD. A total of 45.19% of the prescriptions contained atleast one antimicrobial and the range was found to be 1-4 (Table 2) while from Kenya it was reported to be 84%23. Because of the fear of losing the patient’s confidence in their prescription, doctors look for a remedy, which can offer a quick solution to the problem24 and provides broader empiric antimicrobial coverage without laboratory identification of micro-organism25.
The injections are very often given even when the same drug can be administered orally with greater safety, effectiveness and at a lower cost. In our present audit 37.28% of patients received atleast one injection which constituted 24.96% of TPD (Table 2). It is reported from India that nearly half of the patients received at least one injection19 but fewer injections were prescribed in Nepal (l5%)16. The patients have misconception in the favor of injections, because of which they insist that the doctors should prescribe injections26. These non medical factors can be overcome by reminding the prescriber and the public that faulty and un-sterilized instruments used for injections can produce abscess, transmit diseases such as Hepatitis. transmit malarial parasite. can precipitate poliomyelitis and possibly AIDS besides increasing the cost.
The WHO introduced the model list of Essential drugs for the first time in 1977 containing about 250 drugs. Pakistan introduced its first list of essential drugs in 1981 which has been revised many times. The latest revised list was issued in 19962 and contains 470 drugs. However the number of drugs registered with the drug control authority is at present about 24000, which makes it extremely difficult for the prescriber to know them all and to identify the better amongst them which should be prescribed. The drugs prescribed from NEDLP was nearly 50% TPD iii our present study (Table 2) it was the same reported from Nepal16 while from Nawabshah it was reported to be 56.9% TPD15. These values are very low when we compare with other developing countries like Bangladesh (85%)19 Tanzania (88%)1 and Ghana (93.2%)12. The drugs prescribed from NEDLP was reported to be over 80% to the prescriptions of Rawalpindi/Islamabad’s teaching hospitals17.
There is a widespread prevalence of the erroneous belief that the daily consumption of tonics. vitamins and mineral supplements are essential for health10. In our study vitamins and minerals were prescribed to 40.96% patients constituting 13.14% of TPD (Table 2). In an earlier study we found that consultants in Hyderabad prescribed vitamins/minerals to 50% of the patients20. However in Nigeria 69% of the prescriptions are reported to contain vitamins/minerals7. The present study indicates that the minerals/vitamins are prescribed very liberally to the patients many of whom may not be requiring these.
The general tendency amongst many consultants is to prescribe latest, the more expensive and heavily promoted agents as first line of therapy6 rather than older, less expensive and equally effective drugs. The daily drug cost incurred by patients in present study is found to be Pak Rupees 133.41 (USS = Pak Rs.54), while earlier reported from Nawabshah was Pak Rs. 97.2715. This daily drug cost of Pak Rs. 133.41 looks very high as the average GNP per capita income of Pakistan is U$$ 480 per annum and 60% of the population earns even less than average per capita income29 and 30% population of Pakistan is living below poverty line30. The medical institution does not teach students that they should also consider cost as a factor when choosing a medicine. There is a need to educate both the prescribers and the consumers about the cost-benefit concepts.
We have observed in our present study that use of polypharmacy, overuse of antimicrobials and injections are common while fewer drugs are prescribed by generic names and from NEDLP. Our present study, when compared with similar studies previously conducted by others confirms that variation in prescribing practices exists in different areas of Pakistan. Measures should be taken to make prescriber cost conscious and rational through continued unbiased educational programs as the educational intervention have been shown to be effective in favorable changing the patterns of drug prescriptions31.