Occupational injuries are under-reported all over the world and have been referred to as a “silent” epidemic1. According to the World Health Organization, there are about 250 million cases of injuries per year at work world­wide2. Occupational injuries are a neglected area of health policy in Pakistan. The National Health Policy3, approved by the Federal Cabinet on December 17th, 1997, does not even mention the term “Occupational Injuries”.
The non-industrial welding workers are predominantly involved in the automobile or real-estate sectors. The welders involved in the automobile sector, generally undertake jobs like welding of mufflers and other jobs on motor vehicles involved in accidents or crashes. Often it means lying underneath the vehicle for carrying out repairs.
The gas welding process entails use of acetylene and oxygen gases, which are combined and ignited in a nozzle and produce a flame that reaches temperatures as high as 3100°C, which is then used for welding and cutting. While the method entailing the use of electricity, uses 220 volts of electric current and with the help of iron welding electrodes, cutting and welding is carried out. Both methods produce ultraviolet and infrared radiation at damaging levels4. The welding process can result in hazards such as bodily injuries on the face and limbs, fire and explosion4,5.
Lathe machines in the metal working shops are principally used for modifying/grinding and manufacturing with iron, steel and occasionally even wood, small mechanical components of automobile engines, printing presses, generators and other mechanical components used in various factories. Injuries, while working on lathes result from missing guards and flying chips6.
The welders and lathe machine operators are part of the informal occupational sector and like other informal occupational sectors in Pakistan, very little information is available on occupational injuries and perceptions of hazards in these groups.
This study was undertaken to determine the perception of hazards, prevalence and type of occupational injuries in the past three months and one year in a group of welders working in the automobile sector and lathe machine operators of metal working shops, in the twin cities of Rawalpindi and Islamabad.

Between September 1st and 10th, 1999, a cross-sectional survey was conducted of the automobile welders and between January 24th and 31st, 2000, a cross-sectional survey was conducted of the lathe machine operators inthe twin cities of Rawalpindi and Islamabad. Only those welders and lathe machine operators were interviewed who were allowed to work independently or with minimal supervision by their employers. This was done to exclude apprentices/helpers in the welding and metal working shops.
Two trained health interviewers using a uniform questionnaire, with both open and close-ended questions, interviewed all the subjects and recorded responses on the individual questionnaire. The interviewers visited the known markets where welding and lathe machine shops exist in the twimcities of Rawalpmdi and Islamabad. Two hundred and eight welders and 104 lathe machine operators were interviewed and nobody declined to be interviewed when approached. Various open and close-ended questions were asked regarding knowledge and use of occupational safety measures, work related injuries in the past three months and one year, as well as attitudes about hazards in their occupation. An injury was defined as one necessitating the use of medication/topical ointment, either self or physician prescribed.
In addition, an attempt was made to avoid the “healthy worker effect”7, by tapping those workers who have left their occupation due to serious work related injuries or even death. This was done by asking all the respondents in a close-ended question, i.e., if they knew someone in their occupation who had quit their job as a result of sustaining serious work related injuries, or had died as a result of them. As the healthy workers tend to under-estimate the overall prevalence of severe injuries7.

Two hundred and eight welders working in the automobile sector and 104 lathe machine operators participated in this study. The average age of welders was 30.3 years (range 15-63) and of lathe machine operators 29.7 years (range 16-65). None had any formal vocational training and all learned the skills while on the job.
One hundred and three welders (49.5%) and 31 (29.8%) lathe machine operators believed that their occupation was hazardous for health. The reasons cited in an open-ended question were: adverse effects on eyesight, presence of smoke and the tendency to get wounds on the body. Surprisingly, 15 welders also believed that they could get tuberculosis.
Thirty nine (18.7%) and 63 (30.3%) welders reported sustaining an injury in the past three months and one year, respectively. Types of injuries were elucidated in an open-ended question, for the past three months only. 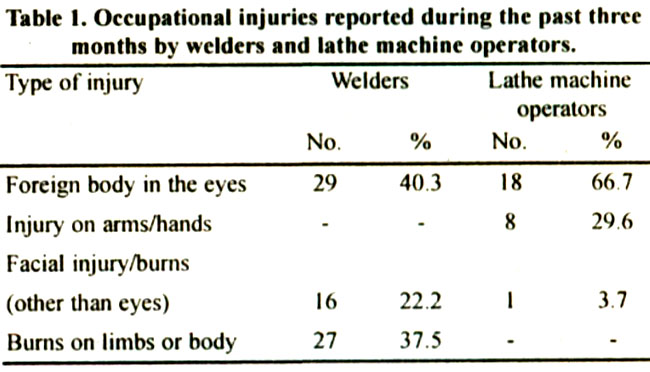 Table 1 shows the profile of injuries. Cumulatively 27 injuries were reported by the welders and the most common type was foreign body in the eyes, reported by 29 (40.3%), the rest were burns either on the face, limbs or the body. Most welders reported multiple injuries involving the same incident. Six welders reported permanent disfigurement or some loss of function as a result of the injuries.
Cumulatively 93 days were taken off from work by the welders who sustained these injuries. Twenty two welders took 1 to 3 days off, while one took 30 days off as a result of severe multiple injuries. Twenty three welders also reported knowing someone who had quit this occupation as a result of sustaining severe injuries including one death.
Regarding lathe machine operators, 72 (26%) reported sustaining an injury in the past three months, while a staggering 76 (73.8%) reported sustaining an injury in the last twelve months. Table 1 shows the profile of injuries in the past three months in this occupational group. Cumulatively 27 injuries were reported with no permanent disfigurement or loss of function in the past three months. The most common type of injury was foreign body in the eyes, reported by 18 (66.7%) and cumulatively, 26 days were taken off-work by the eleven respondents who sustained these injuries.

Table 2 shows the use of protective devices by the welders at work. The most common device was goggles, used by 112 (53.8%), while 45 (21.6%) never used any protective device ever. Some welders reported use of multiple protective devices.
Lathe machine operators’ use of protective devices at work were gloves and safety spectacles, in 21 (20.2%) and 74 (71.5%) respectively. Some respondents reported the use of both devices.
Regarding the use of general safety measures, 48 (23%) welders and 48 (46.2%) lathe machine operators had access to First-Aid box at work, while only 10 (4.8%) welders and 13 (12.6%) lathe machine operators had fire extinguisher in the work place. One hundred and six (5 1%) welders used gas welding process, out of which 81(76.4%) regularly cleaned the acetylene gas cylinders.
Almost all the respondents, both welders and lathe machine operators, believed in the need for safety regulation’s enforcement, as well as information/education for preventing occupational injuries. While in response to an open-ended question as to why work related accidents occur, the only culprit identified universally, was lack of proper concentration on the job at hand. A belief was also expressed that concentration and focus on the job alone would obviate the need for any preventive measures at work.

All of the welders and lathe machine operators learned their occupation by working in welding and metal working shops as either apprentices or helpers and had little formal education.
Despite 30.3% and 73.8% prevalence rate of injuries in the past twelve months in welders and lathe machine operators respectively, almost half of the welders and 70.2% of lathe machine operators did not perceive their occupation to be potentially hazardous for health and the use of protective devices at work in both the groups was far from universal. Yet almost all the respondents believed in the need for preventive education and enforcement of safety regulations at work. This rather conflicting perspective could be explained by the lack of education and the erroneous belief that occupational injuries are an unavoidable and integral part of the job.
Protective devices like goggles and screens are very effective and simple means of preventing injuries in the welders4,7-10. During the interviewing of the lathe machine operators, it was observed that no lathe machine in any metal working shop had hinged or sliding cover, which protects workers from flying chips11 and most of the business establishments had these machines cramped in a small area. It was learned that lathes manufactured in Pakistan do not have hinged or sliding covers because of high cost. It is recommended that lathes “should” be guarded by protective hinged covers12 and that there should be mandatory wearing of safety spectacles at work13. Furthermore access to first aid and fire extinguisher was dismally low, although there are simple and effective ways of limiting accidents and injuries at work site14.
A previous study in Pakistan15, reported 340 occupational injuries in a sample of 36 welders, in the past three months. A substantially higher number in this study, could perhaps be accounted for by the fact that in their study minor injuries not requiring any treatment were also included.
This study has some limitations in that it is based on self-reports and a cross sectional design was used. Hence, epidemiology of injuries and their sequel could not be ascertained reliably, including maculopathy and permanent visual impairment in the welders16,17. This study underscores the need for comprehensive occupational injury prevention strategy in these occupational groups, entailing formulation and enforcement of safety regulations, as well as preventive education. A longitudinal study is required to reliably estimate the prevalence and type of occupational injuries in a representative sample.