Objective: Granulocyte-colony stimulating factor (G-CSF) and granulocyte macrophage-colony stimulating factor (GM-CSF) are frequently used in cancer patients to overcome the granulocytopenic effects of chemotherapy, and also to mobilize the stem cells. The mobilized stem cells are collected from the peripheral blood and used for transplantation following high doses of chemotherapy. However, the molecular mechanism by which these colony stimulating factors (CSFs) bring about proliferation of myeloid precursor cells is not clearly known. Dihydrofolate reductase (DHFR), which has an established role in DNA synthesis, could be a link between administration of CSF and stem cell proliferation. The purpose of this study was to investigate whether CSFs induce white cell proliferation by producing multiple forms of DHFR.
Methods: Twelve patients with non-haematological malignancies were treated with either G-CSF or GM-CSF to mobilize stem cells. Nine healthy subjects were treated with placebo as controls. Blood samples were obtained before and after stimulation with CSFs or placebo. White blood cells were separated and concentrations of both active DHFR and immunoreactive nonfunctional form of DHFR were determined in their cytoplasm using methotrexate-binding assay and enzyme-linked immunosorbent assay, respectively. Total leucocytes count (TLC) was also monitored before and after stimulation with CSFs or placebo.
Results: There was a significant (P<0.05) increase in concentration of immunoreactive nonfunctional form of DHFR and TLC following stimulation with CSFs. There was an increase in concentration of active DHFR as well, however, this did not reach statistical significance. In the placebo-treated subjects, no significant increase in active DHFR, immunoreactive nonfunctional form of enzyme or TLC was observed. However, it was noticed that the base-line values of active DHFR and immunoreactive nonfunctional form of enzyme in leucocytes of cancer patients were higher than the base-line values in leukocytes of normal healthy subjects .
Conclusion:  Our data suggest that colony stimulating factors induce white cell proliferation by increasing levels of multiple forms of DHFR (JPMA 51:68; 2001).

Colony stimulating factors (CSFs) are haematopoietic growth factors, which stimulate bone marrow precursor cells to proliferate and differentiate. Because of this property, CSFs have been increasingly used as therapeutic agents for quick regeneration of white blood cells in patients who are myelosuppressed following standard or high doses of chemotherapy1. CSFs, such as granulocyte-macrophage colony stimulating factor (GM­CSF) and granulocyte-colony stimulating factor (G-CSF) have also been used for mobilization of peripheral blood stem cells in a variety of clinical situations2-5. The mechanism by which these CSFs induce proliferation of stem cells is not well understood.
Dihydrofolate reductase (DHFR), because of its central role in the pathway of de novo DNA synthesis is involved in cell proliferation6. Forms of the enzyme, which are structurally similar to DHFR but are functionally inactive, have been reported to be present in human leukemic cells and leucocytes of patients with non­hematological malignancies7-10. The levels of this immunoreactive nonfunctional form of DHFR (IRE) have been found to be several fold higher in mid log phase cells
than cells in their stationary growth phase11, suggesting that this form of enzyme may also have a role in cell proliferation. The objective of this study was to investigate whether or not G-CSF and GM-CSF induce white cell proliferation through the production of multiple forms of DHFR.

Twelve cancer patients (11 males and I female) who were admitted to The Aga Khan University Hospital from June 1997 to October 1999 were included in this study. All these patients had non-haematological malignancies and underwent stem cell mobilization to be treated subsequently with high doses of chemotherapy. The study was approved by the Human Subject Protection Committee of the University. Clinical characteristics of these patients are listed in Table 1. 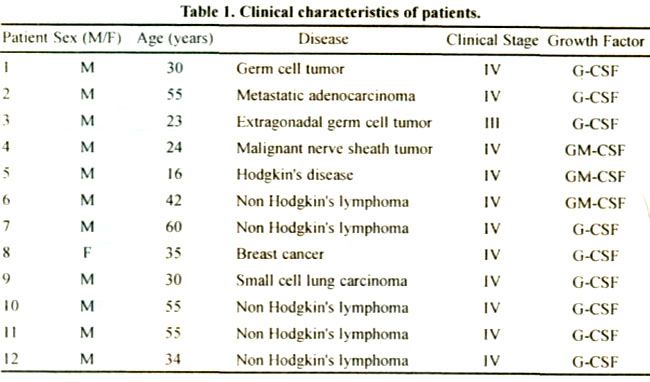 Mean ± SD age was 37.6 ± 14 years. They were treated with either GM-CSF (Molgrastim, Novartis, Basel, Switzerland) at a dose of 250 mg/m2/day or G-CSF (Filgrastim, Roche, Basel. Switzerland) at a dose of 5 mg/kg/day subcutaneously for a period of 5-7 days for stem cells mobilization. Ten ml of blood was removed in a heparinized tube before treatment with CSF and another sample of 10 ml blood was obtained one day after the last injection of haematopoietic growth factor. Total leucocytes count (TI.C) was checked on a Coulter Counter in both the samples. From these samples white blood cells were removed using 3% dextran. Cytoplasms of white blood cells were prepared as described previously8. These cytoplasmic samples were analyzed for active DHFR by using methotrexate-binding assay12 and for total immunoreactive DH FR by enzyme-linked immuno­sorbent assay13 using antiserum that had previously been defined8. The concentration of IRE in these cytoplasmic samples was obtained by subtracting the concentration value of active DHFR from the value of total immunoreactive DHFR. The protein concentration was determined by the method of Lowry et al14.
Nine normal healthy subjects who were matched for age were also included as placebo controls. Two samples of blood (10 ml each) were obtained (one sample on day I before placebo treatment and another one on day 8) from these controls. Both the samples were analyzed for TLC. White blood cells were removed, cytoplasrns were prepared and analyzed for active DHFR and IRE as mentioned above. The values for TLC, DHFR and IRE are expressed as means ± SD. Statistical analysis of the data was carried out by using Student’s t-test. The level of statistical significance was P<0.05.

Figure 1 is a representative diagram, which shows the effect of GM-CSF on concentration values of IRE and active DI-IFR in leucocyte cytoplasm and on TLC in peripheral blood of a patient with germ cell tumor. It should be noted that this patient had neutropenia due to prior chemotherapy, which resolved after two doses of GM-CSF. As shown in the left side of the Figure, there was an increase in TLC, active DHFR and IRE, while the GM­CSF was being administered. However, the increase was not pronounced (especially in the concentration of active DHFR) when the treatment was discontinued upon resolution of neutropenia. When GM-CSF was administered again for 6 days (as indicated in the right side of Figure 1) 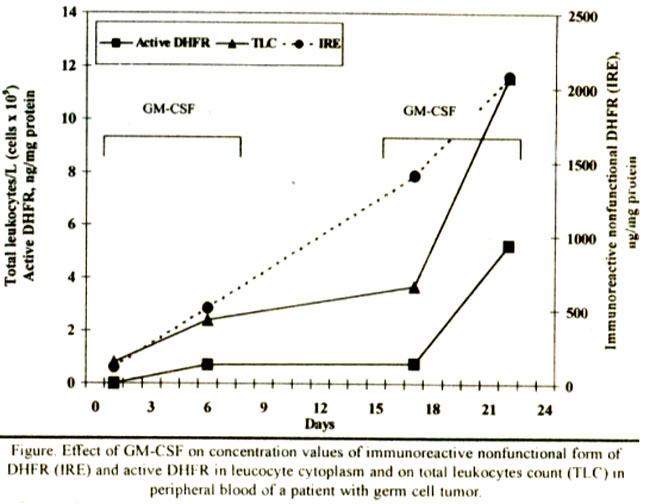 to mobilize the stem cells, there was a sharp increase in concentration values of both DHFR and IRE. The graph as a whole shows a close correlation between the increase in the levels of multiple forms of DHFR and TLC.

Table 2 shows TLC and concentration values of both active DHFR and IRE in leucocyte cytoplasm samples of nonneutropenic cancer patients before and after stimulation with CSF and of normal healthy subjects receiving placebo. There was nearly two fold rise in concentration of active DHFR, three fold rise in concentration of IRE and nearly five fold increase in TLC following stimulation with CSF. This increase in both IRE and TLC was found to be statistically significant (P < 0.005). In placebo control group, no significant change was observed in any of these three parameters.
The base-line values of both active DHFR and IRE in cancer patients were significantly higher (P <0.025) as compared to the base-line values in normal healthy subjects (active DHFR; 1.05 ± 0.96 ng!mg vs 0.11 ± 0.03 ng/mg: IRE: 593 ± 461 ng/mg vs 251 ± 182 ng/mg; Table 2).This observation is consistent with our previously published results8,9. This may be due to the fact that in cancer patients there is an increased production of cytokines including GM-CSF and GCSF, which in turn might be responsible for increased levels of DHFR and IRE.

Traditionally, stem cells for bone marrow transplantation have been obtained by bone marrow aspiration from iliac crest. This process requires general anesthesia. However, recent reports indicate that the number of circulating stem cells in the peripheral blood can be dramatically increased by mobilizing them using CSFs, chemotherapeutic agents or both1-5. This greatly facilitates the collection of stern cells from peripheral blood in numbers sufficient for transplantation and high dose chemotherapy1,3.
The molecular mechanism by which these haematopoietic growth factors bring about proliferation and mobilization of stem cells is still obscure, Our findings in this study regarding the effect ofCSFs on multiple forms of DHFR in non-neutropenic cancer patients are consistent with our previously published data on effect of CSFs on these forms of enzyme in neutropenic cancer patients15,16. It is not clear at the present moment whether the increase in levels of multiple forms of DHFR is due to induction of this enzyme or through increased stabilization of mRNA of DHFR17.
However, our data does indicate. an association between CSF, multiple forms of DI-IFR and white blood cell proliferation. It also suggests that DHFR might be playing an important role in the CSF signaling pathway leading to increased proliferation of progenitor white blood cells.

We gratefully acknowledge the helpful suggestions of Professor Tariq Siddiqui and Professor M. Anwar Waqar. The work was supported by a grant No. S­AKU/BIO(239) by the Pakistan Science Foundation and a seed-money grant h\\ The Aga Khan University.