Adenomyosis with Tuberculosis of Uterus

Adenomyosis refers to the presence of islands of endometrial glands and stroma within the myometrium. The glands may even reach the serosal surface of the uterus. Benson Smeeden established the criterian for adenomyosis that the endometrial glands should extend at least two low power fields into the myometrium1. It occurs in 8% to 27% of patients and is usually encountered in women over 35 years age. Adenomyosis results in an enlarged and globular uterus because of myometrial hypertrophy. The diagnosis may be suspected on cut sections in the presence of depressed small cystic lesions in obvious but ill defined zones of muscle hypertrophy2.
Microscopically the endometrium of adenomyosis usually has a proliferative appearnce, consistent with its basal aver derivation. When the endometriurn is in the secretory phase. this is true only in one quarter of foci of adenomyosis3. These foci can be involved by any of the diseases affecting the orthotopic endornetrium, including hyperplasia and adenocarcinoma4.
Tuberculosis of female genital tract is common amongst all communities where pulmonary or other forms of extra genital tuberculosis is prevalent. It follows that genital tract tuberculosis is nearly always secondary to a focus elsewhere in the body but the spread takes place at a very early stage of disease.

A 35 years old married female with history of primary infertility presented in the Gynaecology Ward, Jinnah Postgraduate Medical Center, Karachi. The patient was suspected as a case of Fibroid Uterus and hysterectomy was done.
Pathological Findings
Macroscopic Features
The uterus on gross examination revealed a mass measuring 8 x 5 cm in the wall which was obliterating the uterine cavity. 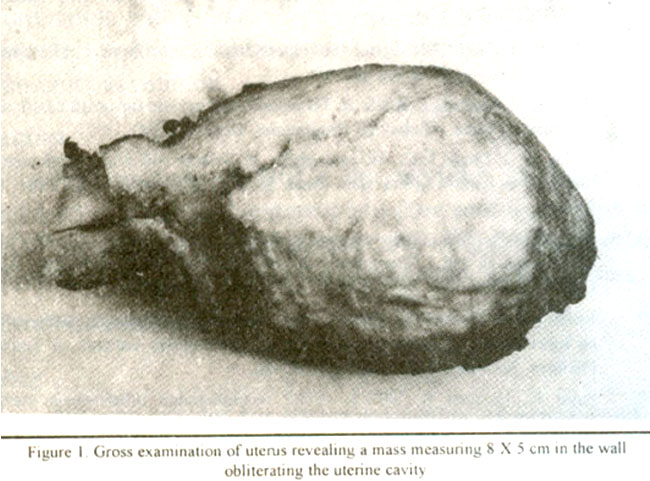 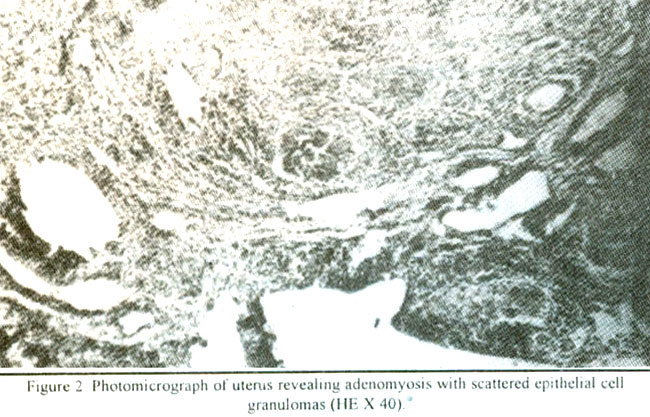 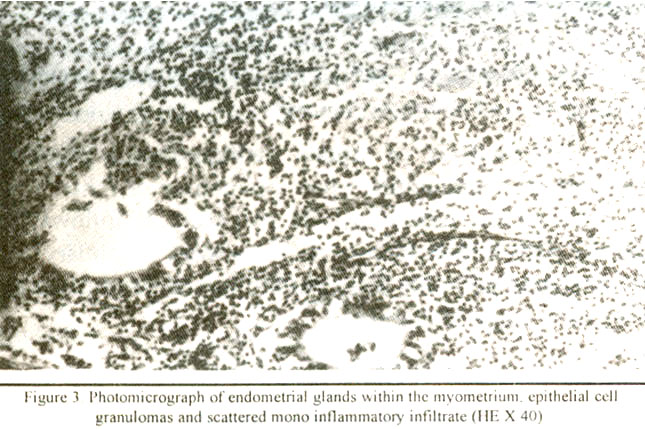 Adenomyosis is frequently found coincidentally during histologic examination of a uterus and can be asymptomatic, the main symptoms of more extensive disease are abnormal bleeding and dysmenorrhoea.
An accurate preoperative diagnosis of adenomyosis often can not be made. However, the presence of abnormal uterine bleeding, progressive dysmenorrhoea and a symmetric enlargement of uterus in women over 35 years age are suggestive. The abnormality is associated with uterine leiomyomas in 46% cases and with endometrial polyps in 12%. The size of the uterus in women in this condition is variable. In one study, it was normal in 20%, weighed 80 to 150 gm in 52% and exceeding 200 gm in 6%5.
Pelvic tuberculosis in majority of cases is caused by mycobacterium tuberculosis (H man type). The bovine bacillus is likely to be involved when the primary focus is in the lymph node or bowel. Incidence is 0.7% in gynaecological admission but is higher (9.3%) in infertility clinics. Any part of genital tract can be affected but the common sites, as observed by Scheafer in descending order of frequency are:-Fallopian tubes 90%. Endometrium Myornetrium 25%, Cervix 5-15%, Vagina 1%.50-60%,
The uterus may look normal to the naked eye and ordinarily tuberculosis endometritis is recognized only by histological and bacteriological examination of the tissues. Occasionally an ulcer may be seen in the endometrium. Extensive involvement can result in collections of caseous material to form a type of pyometra or to cause abscesses in the myonietrium. Adhesions and partial obstruction of uterine cavity are also seen.
The association of adenomyosis and tuberculosis of the uterus appears to be very rare. In our experience this is the first case of adenomyosis associated with tuberculosis of the uterus.