Prevalence of Histological Reflux Oesophagitis in H. Pylon Positive Patients: Effect of density of H. Pylori and Activity of Inflammation

Helicobacter pylon is considered to be a pathogenic factor in gastritis, peptic ulcer, gastric cancer and MALT lymphoma1,2. Recently much interest has been generated to ascertain any relationship of H. pylon with gastroesophageal reflux disease (GORD). H. pylon is known to increase gastrin release and acid output3-5. It may also reflexly affect lower oesophageal sphincter and delay gastric emptying6-10. All these factors are known to play significant role in the pathogenesis of GORD11-15. There are studies to show increased prevalence of reflux oesophagitis in the patients with duodenal ulcer16-18. Contrary to this, recent work From the West shows that eradication of H. pylon from stomach may end up in GORD19,20 and decline in the prevalence of H. pylori has been accompanied by an increase in GORD associated complications e.g. Barretts adenocarcinoma of distal oesophagus.
In low socio-economic strata of Karachi, majority of patients undergoing endoscopy for dyspepsia are positive for H. pylon. Many patients of dyspepsia have an overlap of both ulcer like and reflux like symptoms21. Studies have shed light on the role of acid reflux as well as of H. pylon in causing dyspepsia22,23. How does H. pylon influence the reflux disease in our patients is difficult to ascertain due to low number of H. pylon negative patients. In order to address ütnther the conflicting H. pylon -GORI) interaction, we did a prospective study. Purpose of this study was to determine the effects of colonization of antrum, corpus and cardia by H. pylori on reflux oesophagitis considering the following aspects (1) presence or absence of H. pylori (2) density of H. pylon colonization (3) severity of neutrophil activity and (4) degree of chronic inflammation.

Patient selection
Patients of dyspepsia and heartburn undergoing upper gastrointestinal endoscopy were considered for the study after obtaining informed consent to the study protocol. Background data was collected on age, sex, social class, symptoms and medication. Only patients with upper gastrointestinal symptoms for at least one month were included. Exclusions were recent intake of proton pump inhibitors (PPIs) or non-stetoidal anti-inflammatory drugs (NSAIDs) within last two weeks or antibiotics in the last four weeks. Patients found to have varices or malignancy on endoscopy were also excluded from analysis. Our patients belonged to the low socioeconomic class.
Endoscopy
Endoscopy was performed with Olympus videoscope (GIF130) or fibro-optic scope (GIF2T20, GIFXQ20). Biopsy specimens were obtained with standard biopsy forceps (Olympus FB-24U). Biopsies were taken: three from antrum and two each from the body of stomach, cardia and distal oesophagus. Biopsies form body of stomach were obtained from greater curvature and one each from anterior and posterior wall. Gastric cardia biopsies were obtained with the endoscopy in the retroflexed position about 5mm from squamocolumner junction. In the case of hiatal hernia biopsies were obtained form hernia sac from the proximal edge’ of gastric folds below ‘Z’ line. Oesophageal biopsies were taken about 3cm above the squamocolumner junction. Endoscopic grading of oesophagitis was performed by using the criteria of Hetzel et al 24 Grande I, erythema or hyperaemia of oesophageal mucosa with no macroscopic erosions; grade 2, superficial ulceration or erosions involving <10% of the last 5cm of oesophageal squamous mucosal surface; grade 3, superficial ulceration or erosions involving 10-50% of the last 5cm of oesophageal squamous mucosal surface; and grade 4, deep ulcers anywhere in the oesophagus or confluent erosions involving >50% of the last 5cm of oesophageal squamous mucosal surface.
Histology
An antral biopsy was used for urease test while rest of the biopsy specimens were stained with haematoxylin and eosin and Giemsa stains. Two experienced pathologists blind to the endoscopic findings assessed the specimens. Oesophageal specimens were evaluated for the presence or absence of histological oesophagitis using a four point visual analogue scale (0-3 scale) (Table 1). Grading of gastric specimens was done based on Sydney System modified by Dixon et al25. Following features were assessed (1) presence or absence of H. pylon (2) density of H. pylon colonization (3) severity of neutrophil activity and (4) degree of colonic inflammation (Table 1). 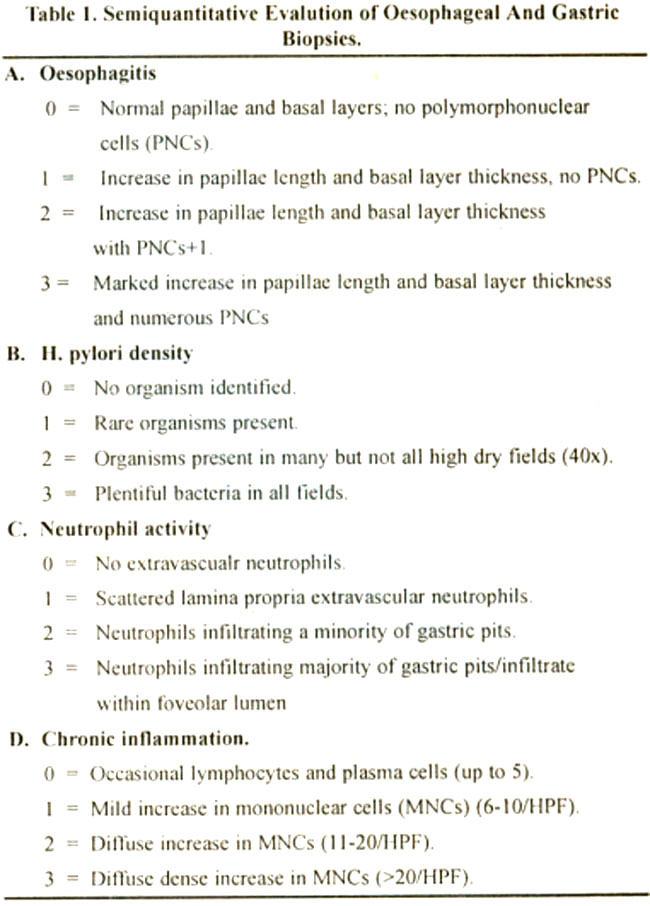 Patient was considered H. pylon positive if histological examination of anyone of the multiple gastric biopsy specimens revealed H. pylori or the rapid urease test was positive.
Statistics
Calculations were performed using SPSS package. Significance was considered at 5% probability level. Effects of presence or absence of H. pylori on presence or absence of oesophagitis were tested with chi square with Yate’s correction. Spearman correlation coefficients were calculated for histological parameters of different biopsy sites in order to assess the correlation of gastritis with the severity of histological oesophagitis. Wilcoxon matched-pair signed-ranks test was used for comparison of paired samples to show differences in H. pylori gastritis in antrurn, corpus and cardia.

During the study period, 140 consecutive patients who met the selection criteria were evaluated. Their demographic characteristics are given in Table 2. 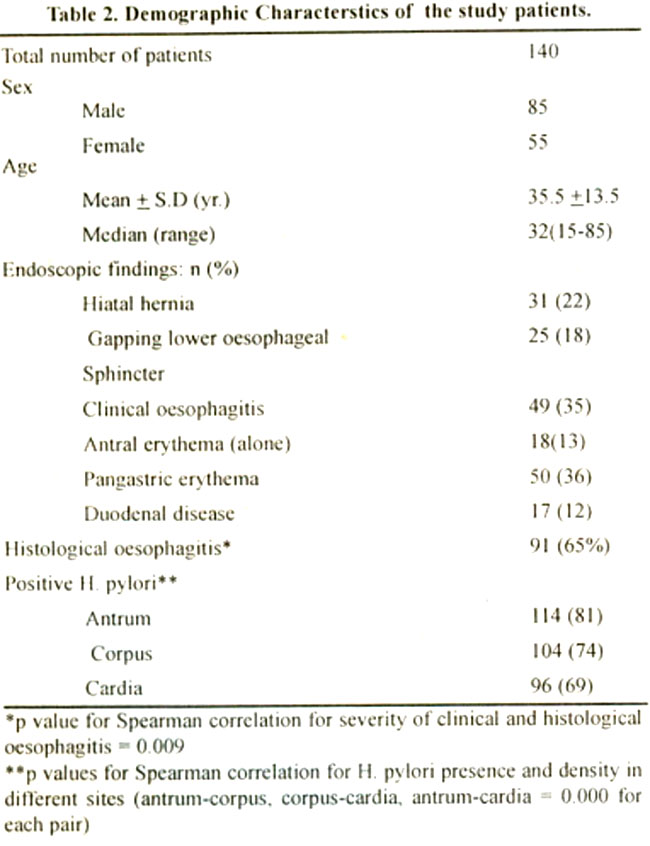 One Hundred and fourteen cases were positive for H. pylon. H. pylori positive antral gastritis was present in all 114 patients. Bacteria were detectable in 1 04 (91%) of corpus biopsies and 96 (84%) of biopsies taken from cardia. Though there was a strong correlation of density of H. pylori (0-3) in antrum with body and of body with cardia by Spearman correlation test, Wilcoxon’s signed rank test for paired samples showed significant differences in the density as we proceeded to the cardia (antrum > body. p=0.0000, body> cardia, p=0.0003). Neutrophil activity in antrum was greater than corpus (p=0000). A trend of decrease in the degree of mononuclear infiltrate was also noticed here (antrum> corpus. p=O.O592). The activity and degree of inflammation was not significantly different in corpus ­cardia pair (p= 0.863 and 0.664 respectively).
H. pylon were present in 114 patients. Out of these 75 had histological oesophagitis. No apparent effects of presence of H. pylori in the stomach on presence or absence of histological oesophagitis could be found by using chi square with Yate’s correction (p=O.855). As hiatal hernia and gapping lower oesophageal sphincter also contribute to the reflux oesophagitis, the analysis was done again after excluding above cases. Total H. pylon positive cases were 73, out of these 50 had evidence of histological oesophagitis (p=0.103). In 11. pylori positive cases with histological oesophagitis, the influence of gastritis of different parts of stomach on severity of histological oesophagitis was evaluated using Spearnian correlation test. In these cases, H. pylon density in the antruin and activity of’ inflammation in antrum and corpus correlate with the severity of oesophagitis with significant p values (Table 3). 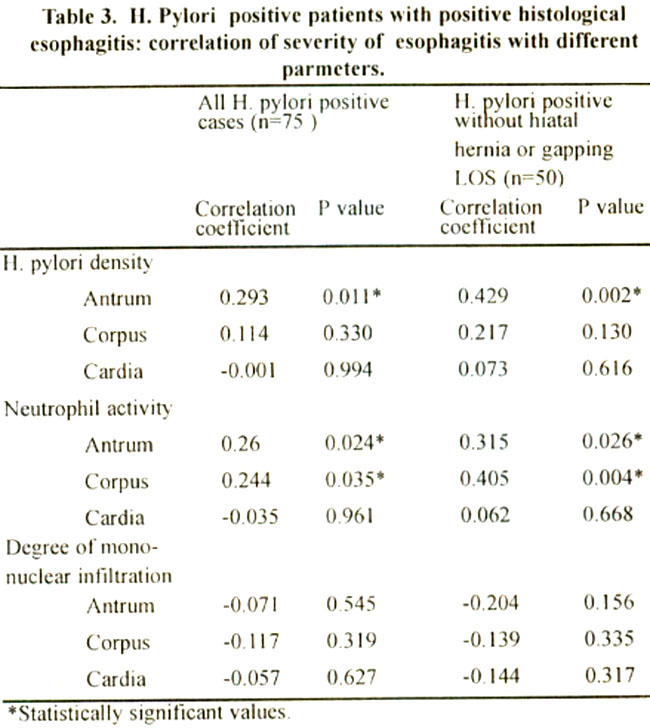