The ob-gene product leptin, a 16 kd protein, is regarded as a postulated feed back regulator of adiposity leading to appetite suppression and catabolic effects1,2. It is now known to act through interaction with receptors in hypothalamus to induce a complex response involving fat mass regulation and energy homeostasis3-4. Leptin is thought to be a communicating link between fatty tissues and the brain; by playing a major role in controlling body fat stores through co-ordinated regulation of feeding behaviour, metabolism, autonomic nervous system and body energy balance in rodents, primates and humans5. Mutation of ob-gene results in hyperphagia and gross obesity in ob/ob mice (mice deficient in leptin) and leptin administration to these mice causes normalization of body weight and decrease in fat stores. In contrast, the development of obesity in another line of mice (db/db) is secondary to a mutation of the leptin receptors. In these mice, leptin levels are markedly increased due to the resistance to the effect of leptin6. This phenomena is observed in most obese hurnans7,8.
Apart from its role in the pathophysiology and physiology of body weight regulation, role of leptin in haematology, puberty, neonatal physiology and reproduction has been addressed in recent years9-13. Rise in leptin at the onset of puberty12-14 and fall in post­menopausal women15,16, suggested that leptin levels may be associated with normal reproductive events. There is evidence that body fat plays a role in sex steroid metabolism17 and relationship of leptin with gestational hormones in pregnancy have been suggested10. Factors other than the fat, for regulation of expression of ob-gene for leptin have been reported18. Pregnancy is associated with increased appetite. fat mass, body weight and metabolism as well as characterised by dramatic rise in levels of reproductive hormones, which decline after delivery. It is noW knwon that low leptin levels disrupt the reproductive system, as ovulation stops in starving women and testosterone levels fall in men19,20, and these changes have been accounted by the drop in the leptin production21,22. Although a ftw studies have documented an increase in circulatory leptin levels during pregnancy23-25, bitt sources and stimuli are unclear. Further, the hypotheses that high eptin levels could represent an important feedback modulator of substrate supply and subsequently adipose tissue status during late gestation25, remain to be confirmed. The mechanism underlying maternal weight and fat mass regulation particularly during the third trimester are poorly understood. Information of leptin in relation to pregnancy or any other variable in Pakistani subjects is completely lacking. Therefore, serum leptin levels were measured in pregnant Pakistani females in order to ascertain its relationship with maternal physical obstetrical parameters at delivery and to determine its co­relation with maternal weight, body mass index, placental 80 weight and parity.

Subjects
One hundred and ten full term normal pregnant females froni Lady Dufferin Hospital and Ziauddin Hospital. Karachi were included. All subjects gave their consent to participate in this study. Pregnancies less than 36 weeks and those with diabetes or any other illness were excluded. Body mass index (BMI)26 was measured by the formula kg/m2. The weight of placenta was taken just after delivery. lnforrnations about each subject were recorded on an standardized structured performa.
Leptin assays
Blood samples were taken from peripheral vein at delivery ‘when the subject was in active labor. After centrifugation serum was obtained and frozen till further analyses. Serum leptin were measured by Active Human
Statistical analyses
SPSS software program (standard version 8.0) was used for statistical analyses of data that entailed student’s test and linear regression. Statistical significance was set at p< 0.05.

The physical parameters are shown in Table. 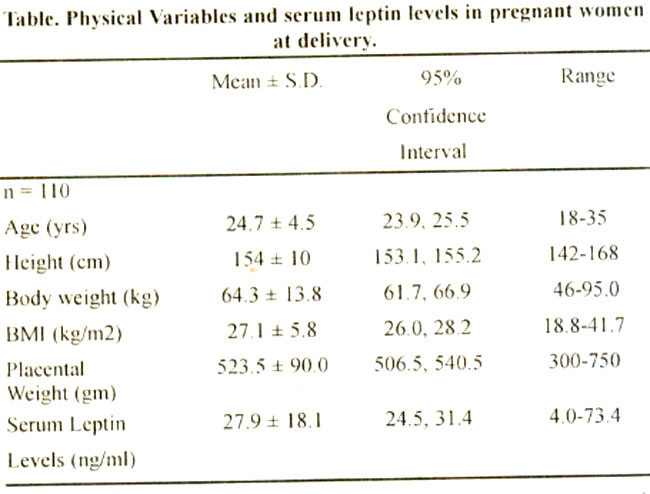 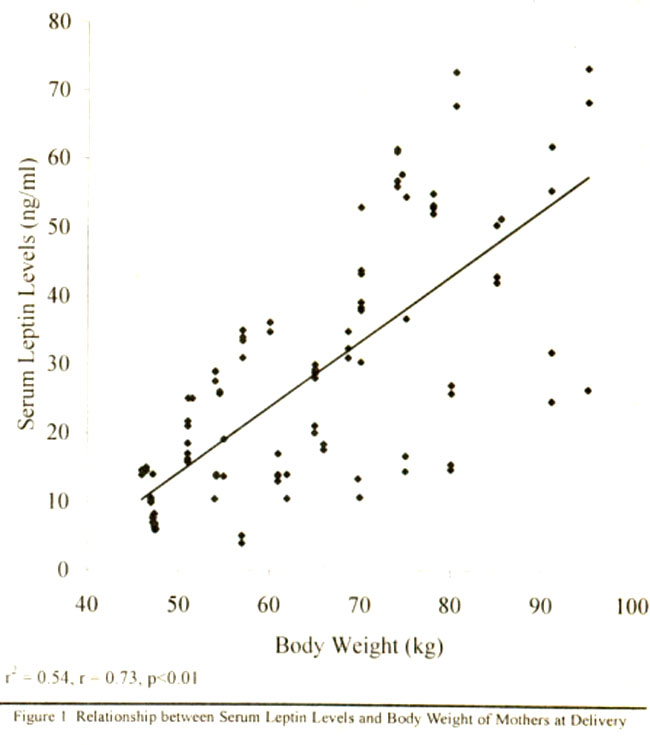 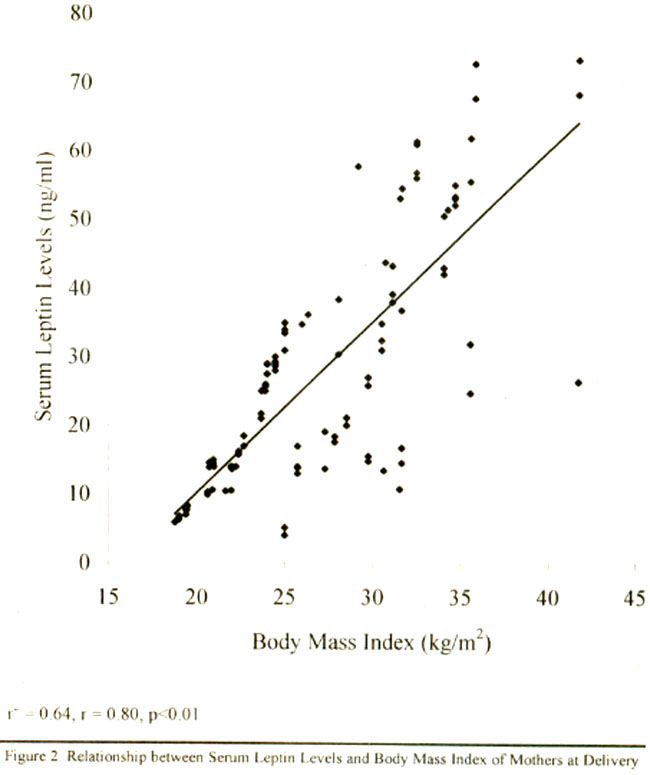 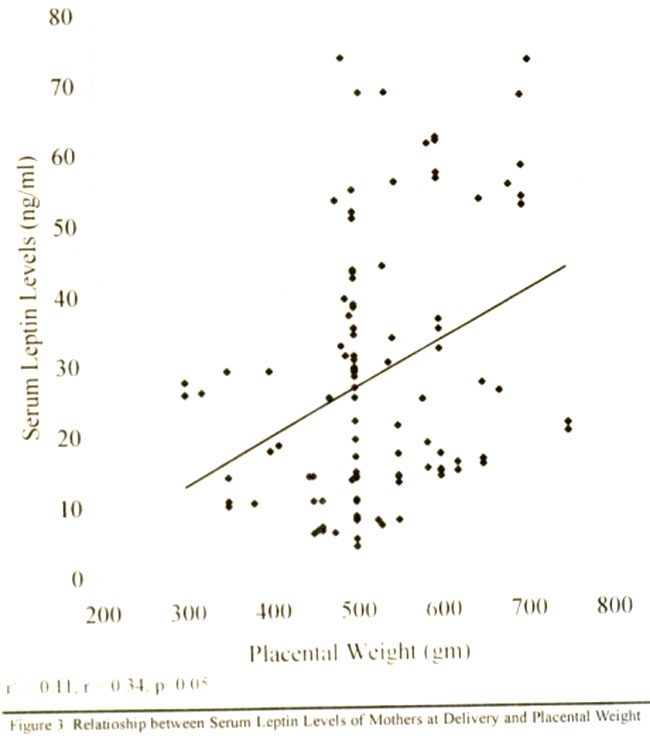 Serum leptin is considered to reflect the state of nutriton, energy reserve and serves as a metabolic gate to the reproduction11 . Its levels and potential role in pregnancy Body Mass Index (kg/m) have been reported11,23,25. but its source and functional significance in maternal physiology remains unclear. The present report describes leptin ‘s relationship with BMI and placental weight. Our data provides evidence that leptin levels are present in maternal serum and correlate positively with maternal BMI. Leptin levels increase with increase in weight and body mass index and that 54% and 66% of increase in leptin can be explained on the basis of increase in the body weight (r 0.54) and BMI (r2 = 0.66), respectively. Similar findings were reported in other populations10,13,14. These results suggest that at delivery the regulation of leptin is not different from that in non-pregnant females in whom leptin levels are also correlated positively with BMI7. In another study, leptin concentration was increased progressively during the first two trimesters with peak at 28 week and levels are correlated significantly with maternal weight and BMI27. As expected energy expenditure increased during pregnancy because of additional maternal and fetal tissues and decreased postpartum in accordance with weight loss. Leptin not only decreased food intake, but also normalised elevated levels of appetite - stimulating hypothalamic peptide, neuropeptide Y (arcuate nucleus) in genetically obese mice and rats28. Leptin’s role in suppressing appetite, as well as, accelerating metabolism and selectively suppressing fat synthesis and most recently elucidated a fascinating role in reproduction has been documented23,29. in the present study, positive correlation between serum leptin and placental weight may suggest placenta as a site for leptin and/or leptin receptors synthesis/secretion. With the increase in adipose tissues during pregnancy, the placental and/or secretion of leptin may be an additional factor, that contributes to the maternal serum leptin concentration, since mRNA encoding leptin has also been documented30-32. In another study10. plasma leptin levels of 18 healthy women immediately before delivery and on day 3 after delivery were measured and significant higher leptin concentration before delivery than at day 3 post-delivery were implicated to support the placental syiithesis and/or secretion of leptin.
Further, chronic elevation of leptin levels throughout pregnancy suggest that maternal resistance to leptin may occur, which possibly counters appetite satiating and metabolic effects and would therefore faciliatate maternal weight gain24. During pregnancy, appetite is increased and low leptin levels would be expected. In fact, the opposite is true and leptin levels in pregnancy are high. It has been argued that pregnancy might represent a leptin-resistance state33. Such resistance to endogenous leptin, as has been attributed to defect in leptin transport system or hypothalamic receptors or in the central leptin signaling cascade in obese sub jects31.
Preliminary findings of raised maternal level at one of the link between the neuroendocrine system and adipose tissue, which expands during pregnancy. Role of neuropeptide Y (NPY), one of the neuroendocrine mediators, has been discussed in the relation of malnutrition, energy expenditure and sexual maturation36,37. The effect of leptin on hypothalamic neuropeptide Y gene expression38 and the presence of leptin receptors in the ovary39 may be the mechanisms by which leptin could influence the hypothalamic-pituitary-ovarian axis and hence reproductive function in the female. Since leptin affect NPY synthesis in hypothalamus and probably its release, role of leptin in the regulation of reproductive functions and sexual maturation has been hypothesised. Thus, a negative feedback system regulation of food intake. leptin secretion and hypothalamic NPY expression has been documented40 To ascertain this and the contribution of leptin in maternal blood, if any, has yet to be determined. Further studies are needed to establish this hypothesis of leptin contribution by placenta.

We are grateful to Drs. Setlina. Director Lady Dufferin Hospital, Mustafa and his staff (incharge Laboratory. Shagufta. Lady Dufferin Hospital, Rubina Idris. Gynaccologist, Ziauddin Hospital). and all the staff of labour room of both hospitals especially staff lrshad, Rani and Perveen for their kind cooperation. We are indeed thankful to Dr. Lubna Baig and Mr. Ejaz Alam for their expert advice in statistical analysis. Also we are indebted to Dr. Aarnir Omair for his advice in developing the study design.