Objectives: Non-Steroidal anti-inflammatory drugs (NSAIDS) have long been used as anti-inflammatory agents, yet their mode of action is not entirely clear. The inhibitory effects of NSAIDS on prostaglandin production can only partly explain their anti-inflammatory actions. This study was aimed at defining the role of cycloxygenase (COX) inhibitors on nitric oxide (NO) production in murine macrophages in vitro.
Methods: Murine macrophages were obtained from the peritoneum and after exposure, in vitro to lipopolysaccharide (LPS) produced nitrite, measured after 24 hours by Griess reaction. The macrophages were pre-incuha ted with aspirin or indomethacin before activation with LPS.
Results: Treatment with aspirin resulted in an increase in nitric oxide production. A similar response was obtained with indomethacin treatment.
Conclusion: This study shows that COX inhibitors significantly increase NO production in murine macrophages in vitro and this may be one of the mechanisms by which they exert their anti-inflammatory effects (JPMA 51:28; 2001).

Nitric oxide (NO), initially identified as the endothelium-derived-relaxing-factor (EDRF) 1,2 is now recognised to be an intra- and extracellular mediator of function3. NO produced by constituitive form of nitric oxide synthase (cNOS) is a key regulator of homeostasis,including blood pressure by causing vasodilation4. whereas NO generated by inducible nitric oxide synthase (iNOS) plays an important role in inflammation and host defense responses3.
Thus, NO is a physiological and a pathological mediator thought to be involved in inflammation5. In this respect the literature is confusing - both pro-inflammatory and anti-inflammatory properties have been assigned to NO.
Since NO is a vasodilator, sites of NO synthesis experience increased blood flow, which is responsible for the heat, redness and edema that characterize inflammation6. But inhibition of nitric oxide synthase (NOS) of vascular endothelium, elicits increased leukocyte adherence (7 to 9 fold), emigration and albumin leakage78. This allows NO to act in an anti-inflammatory manner. NSAIDS such as aspirin and indomethacin are anti-inflammatory drugs whose main mechanism of action, fully categorized, is inhibition of the cycloxygenase (COX) pathway and subsequent prostaglandin synthesis. But it fails to completely explain their anti-inflammatory properties. We wanted to assess whether anti-inflammatory mechanisms of these drugs involved NO as well. Thus we investigated the effect of aspirin and indomethacin on NO production in murine macrophages in vitro.

Drugs preparations
Aspirin ( Acetyl salicylic acid ): 300 mg of aspirin was dissolved in 15 ml of autoclaved distilled water. 250 ul of this solution was made upto a concentration of 1 mg/mi with RPMI 1640, 10 % FCS and 1% Gentamycin.
Indomethacin (p-chlorobenzoyl-5-methoxv-2-methyl­IH-indole acetic acid): 1.0 mM solution was made by dissolving indomethacin in 10 % 0.1 N NaOH and 90 % PBS (by volume). The required concentrations were used by diluting it appropriately with RPMI 1640 , 10 % FCS and 1% Gentamycin.
Cell culture
Murine macrophages were obtained f rorn the peritoneum in saline. The cell suspension was centrifuged at 1200 rpm. for 10mi The supernate was discarded and the cells resuspended in Phenol Red free RPMI 1640 cell culture medium (Sigma) with 10 % FCS and I % Gentamycin. The cells were checked for viability with (0.4%) Trypan blue - cell exclusion test and counted under a microscope using hemacytometer.
The cells in a concentration of lx106/ml were cultured in 24 well plates (Corning). After overnight incubation at 370C the medium was replenished (macrophages remain adhered to glass). Thus all non-adhering cells were removed. Cells were observed under an inverted microscope each time, before and after replenishing the medium, to detect any morphological changes or contamination.
Experimental Design
Macrophages in the controls wells were not treated with NSAIDS; equal volume of the medium was added instead. Macrophages in the principle wells were treated with NSAIDS for 4 hours (unless otherwise stated). All the wells containing cells were thoroughly washed thrice with RPMI 1640 to remove any trace amounts of extracellular NSAIDS. The cells were then replenished with the medium containing 50 ng/ml of Escherichia coli (LPS) Iipopolysaccharide. LPS is necessary for the activation of macrophages to produce NO10. Since NO is unstable nitrites wre assayed 24 hours post-LPS activation.
Assay for Nitric Oxide
NO generated by the macrophages is oxidised to nitrite by atmospheric oxygen. Thus nitrite is the stable end-product of NO. Quantitation ol nitrite was done using Griess reaction and tile colour developed (pink) was read at 550 nm in D\\natech 5000 Elisa Readerit. A 550 was measured and the amount of nitrite was obtained by extrapolation from a standard curve using Sodium Nitrite (Sigma) as standard. Ihe standards were run in triplicates. 96 well plates were used for spectrophotometry (Corning). Griess reagent was prepared with 0.1% Naphthyl (Ethylene diamine dihydrochloride) (Sigma). 1.0 % Suiphanilamide (MERCK) dissolved in 2.5% Phosphoric acid.
Statistical Analysis
Nitric Oxide index was determined as under:
Percent increase over control (LPS-treated macrophages) was considered rather than the actual concentration of nitrite, because several experiments were run and the nitric oxide produced by the macrophages differed greatly in each experiment. An average of the nitrite produced would not truly reflect the upregulation of NO production and effect of different doses of the NSAIDS could not be compared. Statistical analysis was performed using Student’s t-test. A difference with a p value <0.05 was considered statistically significant. 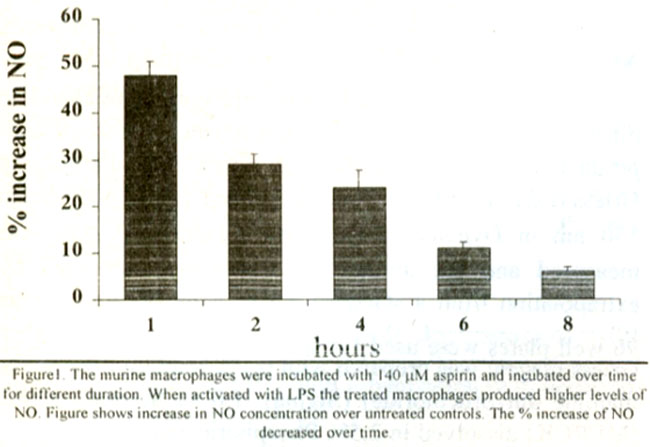 The response was elicited at doses of aspirin ranging from 10 j.tM to 420 pM. After 4 hours of incubation with aspirin. the cells were washed and activated with LPS as before.
The results (Figure 2.) 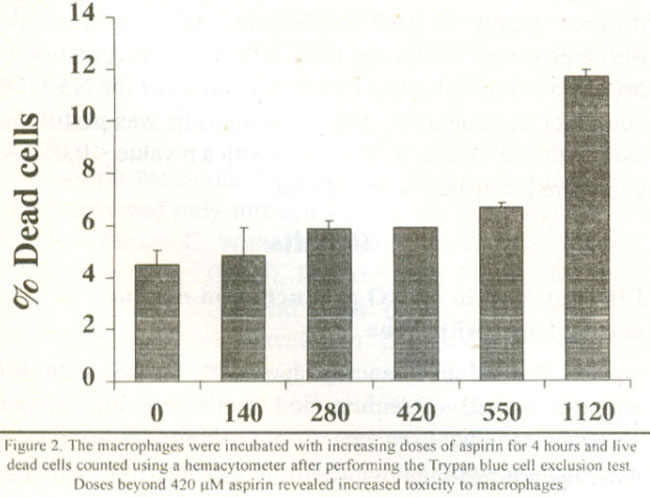 show an increasing trend in NO production with increasing doses of aspirin. The increase was continuous up to 420 uM after which NO concentration decreased. This was correlated with morphological destruction of cells observed under the inverted microscope.
Cell viability
It was microscopically observed that at doses beyond 420 pM of aspirin cellular damage to the macrophages occurred. To assess this cellular damage the Trypan blue exclusion test7 was performed and viable, as well as dead cells were counted under the m icroscope, using a hemocytometer. 4.5 % cells Were non-viable in untreated controls. This percentage increased to 6% by dose 280 uM of aspirin and remained constant till 420 pM. At 550 uM, 6.7% of the cells were dead and 12% at double this dose. This data suggests that high doses of aspirin are toxic to the murine macrophages. This imposed a limit on the concentrations employed in our experiments. 420 pM aspirin was considered as the threshold value, since beyond this dose significantly greater cells died compared to baseline and NO production also decreased. 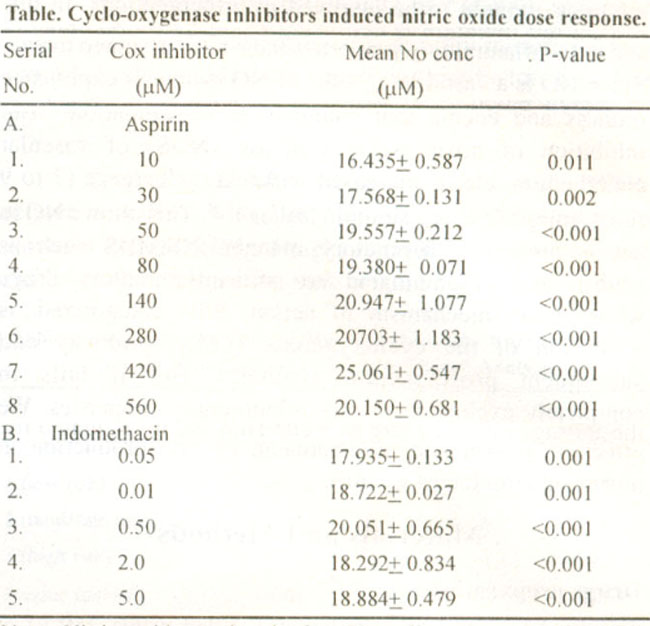 The study demonstrates that cycloxygenase inhibitors, aspirin and indomethacin, increase nitric oxide production by murine macrophages in vitro and this may be one of the mechanisms by which they exert their anti-inflammatory effects. The first step in the pathogenesis of inflammatory conditions is adhesion of circulating leukocytes to activated vascular endothelial cells in the in flamed tissues and subsequent transmigration through the endothelial cells9. Kubes et al. performed intravital video microscopy of individual venules of a cat mesenteric preparation8. Superfusing the prepararion with NO synthase inhibitors, they observed that both inhibitors of NO caused leukocytes to adhere to venular endothelium which was reversed with L-arginine, the substrate for nitric oxide. Thus nitric oxide is an important endogenous modulator of leukocyte adhesion and impairment of NO production results in a pattern of leukocyte adhesion and emigration that is typical of inflammation.
Amin et al. used murine macrophage cell line RAW 264.7 to observe the effect ofNSAIDS on NO production in vitro13. The cells were first incubated with NSAIDS for 2 hours tbllowed by addition of 100 ng!ml LPS in the same medium. After 16-18 hours of incubation, the medium was used to estimate nitrite concentrations. Specific activity of iNOS was determined in cell-free extracts at the given time. They report a concentration dependent inhibition of nitrite accumulation in cells treated with 2-3 mM of aspirin. lndomethacin did not demonstrate any significant activity against nitric oxide. They obtained similar results for iNOS ex tress ion.
The many differences between our experimental design and that of Amin et al. could explain the contrast in the results. Firstly, they used a cell line, whereas ours’ were physiological cells. The doses used in their experiments were almost 7 times greater than the maximum dose we could apply in our experiments. Our cells could not sustain such high concentrations of the drugs, as shown by cell viability results. Most importantly Amin et al. did not pre­treat the cells with aspirin or indornethacin. In fact, nitric oxide was generated by the macrophages in the same medium in which aspirin was abundant. Thus the possibility of a chemical interaction between NO and aspirin could not be excluded.
Aspirin is known to scavenge other free radicals. Our results for time-response for aspirin show a decreasing trend in NO concentrations. Aspirin is taken up by macrophages and is metabolised. As the incubation period is increased, it is possible that the metabolic byproducts of aspirin accumulate. These byproducts may have an inhibitory effect on NO production, as shown for other free radicals12. Amin et al. incubated the macrophages for 16­1 8 hours, which could, not only explain the decreased nitrite concentrations but also the inhibition of iNOS activity.
The results of this study suggest that cyclo­oxygenase and nitric oxide synthase pathways are linked. Inhibition of prostaglandin synthesis results in increased nitric oxide production. The ability of nitric oxide to inhibit the primary step in inflammation - leukocyte adhesion, could be possible for the anti-inflammatory effects of COX inhibitors. The results suggest a novel mechanism of action of cyclo-oxygenase inhibitors via iNOS pathway.