Letter to the Editor

Madam, The term “choristoma” is applied to microscopically normal tissues present in an abnormal location1. Although it is not neoplastic but a “heterotropic” rest of cells, it produces a tumor like mass2. In the upper aerodigestive tract, heterotropic islands of mature hyaline cartilage are mainly seen in the nose and nasopharynx. These ‘cartilaginous choristomas” are however , very rare in the oral cavity and only 25 cases have been reported in the literature3-5. Cartilaginous choristomas must be distinguished from true chondromas as well as from cartilaginous metaplasia occurring underneath ill fitting dentures secondary to chronic inflammation and fibrosis6.
A thirty seven year old woman from Sukkur presented with a papillomatous gowth at the base of the tongue. The growth was first noticed by the patient about three years back and it was slowly increasing in size. A simple excision was performad and the specimen was sent to us for histopathology. Grossly, it was a polypoid tissue, gray in color and firm in consistency and mearured l.6x1 .3x 0.6cm.
Histopathogly revealed overlying stratified squamous epithelium, lobules of mature hyaline cartilage with focal mild nuclear pleomorphism and occasional binucleation. The lobules of hyaline cartilage were surrounded by hyalinised connective tissue (Figure). 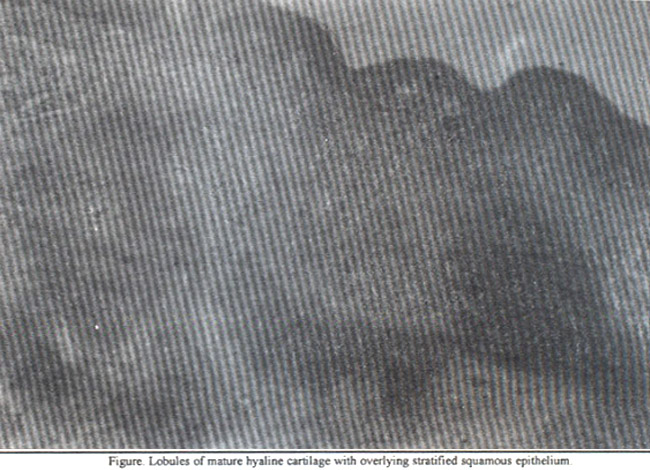 It was seen to extend focally to the margin of excision. The lesion was reported as benign cartilaginous lesion with features favoring cartilaginous choristoma. As mentined earlier, cartilaginous choristomas in the oral cavity are very rare. Within the oral cavity, the tongue is the most common location3,4. The age range of these patients is wide, from 10-80 years with a mean age of 47 years; and are slightly more common in females; size ranges from one to several cms in diameter2.
Histologically, these lesions are composed of a tumor like mass of hyaline cartilage surrounded by dense or loose fibrous connective tissue. The cartilage is usually more mature in the central region and less mature at the periphery5. Although non- neoplastic, the lesion expands in a tumor like fashion due to cartilage formation from multipotential mesenchymal cells2. In the past, these lesions were often reported as chondromas6,7, but it is now recognized that these masses represent non neoplastic developmental lesions of cartilage rather than neoplasms2. Cartilaginous metaplasia in oral cavity which occurs beneath ill fitting dentures is distinct from cartilaginous choristoma and histologically shows chondroid matrix with diffuse calcification and clusters of cartilaginous cells2. Recurrence in cases of cartilaginous choristomas has not been reported. Simple excision of the lesion along with surrounding soft tissue is recommended and is curative2,8.