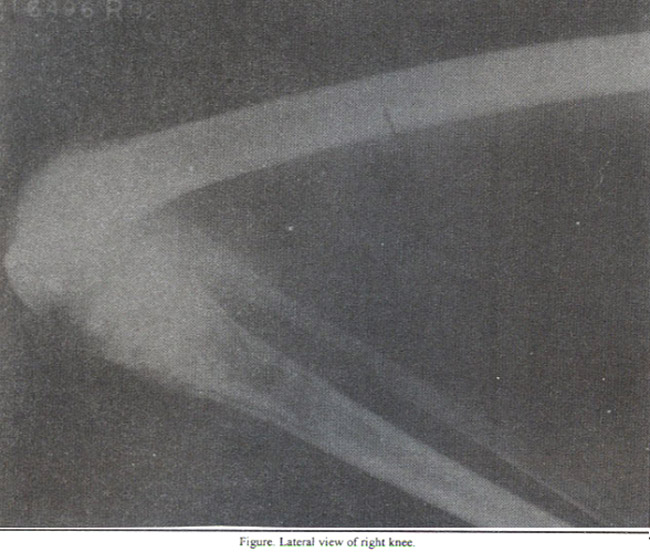 Osteomyelitis continues to present a difficult diagnostic problem because of similarity of clinical, laboratory, and radiographic signs in patients with a variety of traumatic, neoplastic, and inflammatory conditions1. Extensive destructive changes often occur before accurate identification and therapy take place. Importantly, radiographic findings usually are delayed after the onset of clinical signs of infection.
The four major routes by which bony structures can be contaminated include hematogenous spread, contiguous spread, direct implantation and post-operative infection2. In children, the most common mechanism is hematogenous dissemination. Because of differences in the vascular supply of the tubular bones, the radiologic and pathologic appearance of osteomyelitis differs in the child, infant and adult. In children, the open cartilagenous growth plate results in separate vascular supplies for the metaphysis and the epiphysis. As a result, there is a tendency for hematogenously disseminated osteomyelitis to involve the metaphysis in children.
Radiographic appearance is highly variable and may mimic many other pathologic processes1,3. There is a latent period of approximately 10 days between onset of symptoms and the presence of osseous changes in a long bone. Soft tissue swelling may be seen in 3 days. Clear lucent planes between bone, muscle, fat are obliterated. Earliest bony changes include single or multiple areas of demineralization as trabeculae are destroyed. These are often seen in 2 weeks. Periostitis with involucrum formation occurs when infection penetrates cortex and may be seen at 3-6 weeks. Sequestra (dead bone) appear denser due to reactive osteolysis of adjacent bone. Identification of a bony sequestrum narrows the differential diagnosis. A Brodie’s abscess will appear as a lucent region with a sclerotic rim. Chronic infection is characterized by thick involucrum with areas of destruction and sequestrae. 99mTc bone scans are positive early but are nonspecific3.
Jn addition to osteomyelitis differential diagnosis of permeative lesion with cortical destruction in the pediatric population includes Ewing’s sarcoma, eosinophilic granuloma and atypical osteosarcoma.
Treatment necessitates immediate and appropriate antibiotic therapy, and requires either a positive blood culture or open bone biopsy2. If clinical improvement does not occur within 48-72 hours, chronic infection with sequestra or abscess can be assumed, requiring surgical debridement. Antibiotic therapy is extended over 4-6 weeks, and the course is often complicated by pathologic fracture, nonunion, spread of infection to the joint and hematogenous dissemination.