Advanced and neglected disease is a common scenario even now in most developing countries including ours. Here we describe a case of a nineteen-year-old boy who first presented in 1997 with dyspnoea, chest pain and dysphagia for one and a half years. A CT scan done at that time revealed a solid mass-occupying the whole of left side of thorax. A tissue biopsy sent for histopathological examination, was suggestive of benign neural tumour. He was erroneously judged unsuitable for surgery, due to large tumour size and the lesion being adherent to vital structures, instead, he was administered twenty shots of radiotherapy elsewhere. After the completion of radiotherapy course, his chest rcentgenograms including chest X-rays and C.T. scan were repeated which showed received for one year. His third C.T. scan in June 1998 revealed that the tumour instead of shrinking had increased in size and now occupied 9/10th of the thoracic cavity, and after rupturing the diaphragm, had reached up to the umbilicus internally (Figures 1 and 2). 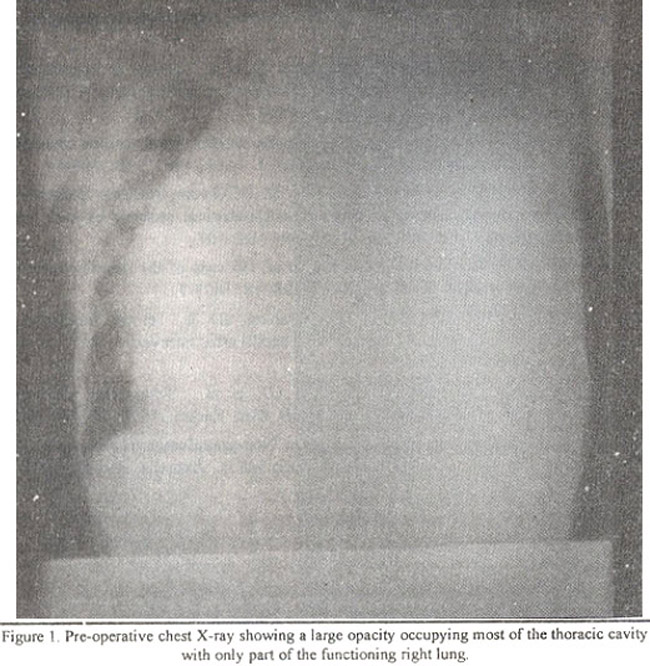 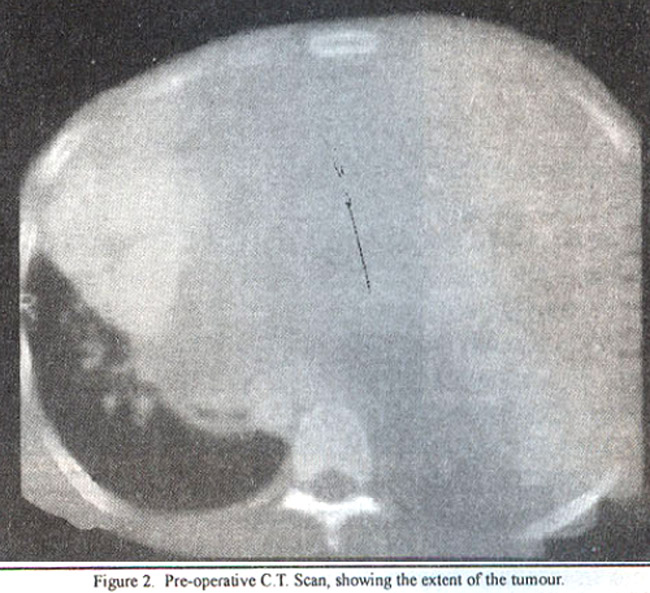 At this time he presented to us In May 1997, he was severely dyspnoeic and was unable to swallow any liquid or solid food and was on oxygen therapy. lie was urgently operated upon within twelve hours after resuscitation and achieving hemodynamic stability.
Operative findings and procedure
Inspite of all possible preoperative support the patients Pa02 could not be improved above 70mmHg. After induction and very difficult intubation, left post anterior thoracotomy was performed, which relieved pressure over the mediastinum and improved the patient’s homodynamic status.
The tumour was resected piecemeal. As the mediastinal surface of the tumour was firmLy adherent with pericardium, adventitia of aorta and mediastinal pleura, these were resected along with the tumour, including the phrenic nerve but the vagus nerve was saved. The blood lost was replaced with 10 units of whole blood during the procedure. The diaphragm was repaired. Removal of visceral pleura resulted in multiple punctures in the lungs, which were repaired. Separation of firm adhesions from abdominal viscera also resulted in multiple bleeding sites.
which were secured with sutures and diathermy. His lungs, which had almost completely collapsed, expanded immediately, and were kept patent by the help of chest tube (Figure 3). 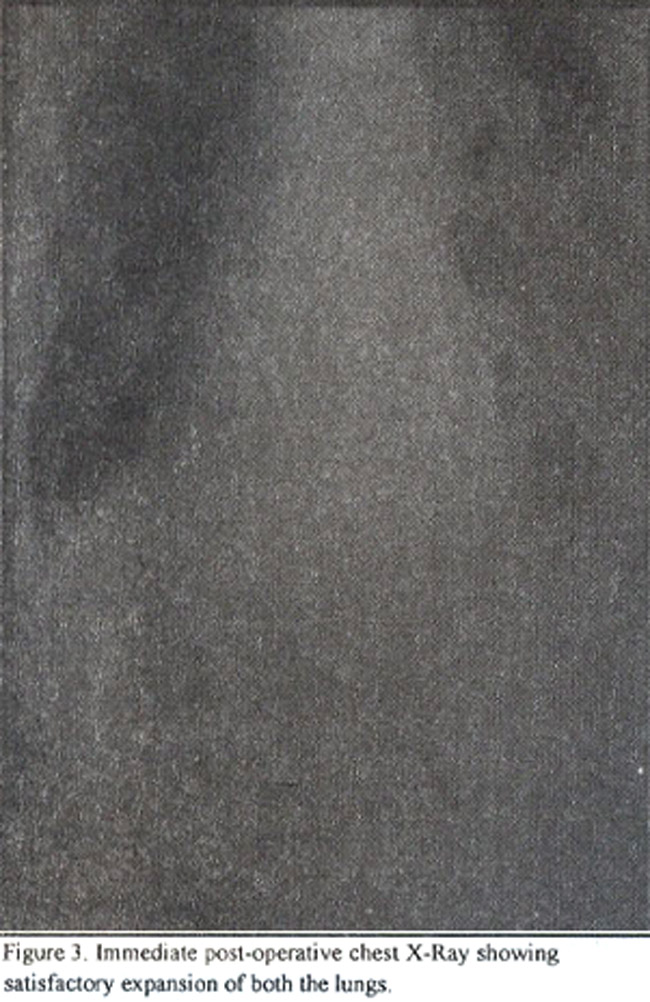 The Patient remained on ventilatory support for 24 hrs and was shifted from intensive care unit on the third post-operative day.
Histopathology workup
The large reddish-brown irregular tumour in toto weighed 19 kg, of which 14 kg was solid tumour and 5 kg the fluid it contained in its cystic spaces (Figure 4). 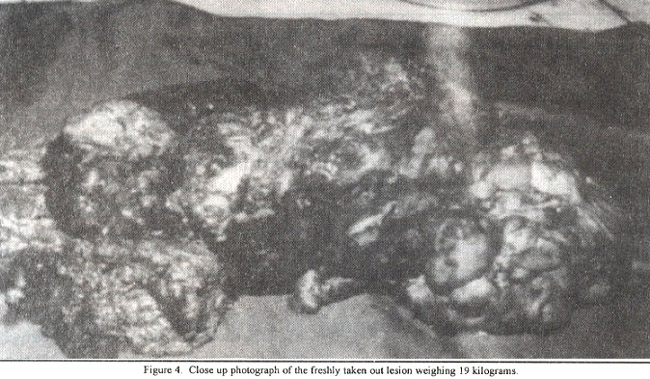 The aggregate dimension of the lesion was 67 x 52 x 40 cms. After examining multiple sections from the lesion, it was diagnosed as a benign mature cystic teratoma with extensive necrosis.
Literature search showed no comparison of this tumour in terms of size and presentation and thus it was labelled as the largest mediastinal tumour ever reported in literature.
Postoperative recovery
The patient had an extremely good recovery and his pressure symptoms recovered completely. To date, he has remained symptom free with no tumour recurrence.

The mediastinum, is arbitrarily divided into four compartments by the position of the heart. This division enables radiologists to localize lesions with accuracy and is valuable in the differential diagnosis of mediastinal lesions. Cystic lesions and neoplasms, as benign teratomas of the mediastinum which are rare and account for 5% to 8% of all tumours in this region. They arise more than 95% of the times from the anterosuperior mediastinum1-3.
The lesions commonly arising in the anterior mediastinum include thymomas, thymic cysts, germinal tumours, thyroid lesions, parathyroid adenomas, malignant neoplasm is mature cystic teratoma. It usually become lymphomas, paragangliomas, lymphangiomas and lipomas4-6. The most common type of mediastinal germ cell clinically apparent in young adults, may grow to a large size and has a distinct, sharply delineated wall that often becomes calcified7. Mature cystic teratoma affects both sexes equally8. The relative frequencies are considerably different in the pediatric population9. Malignant transformation of mature cystic teratoma is very rare10, however, it is often found adherent to surrounding structures11. As a group, non-seminomatous germ cell tumours of mediastinum do not respond so well to chemotherapy as do their microscopically similar testicular counterparts; relapses occur more frequently and patient survival is worse12. As this tumour was mature with no immature areas, therefore response to radio and chemotherapy was poor as expected.
This tumor, which is being reported as the largest mediastinal tumoe, was peculiar due to its extremely large size, so much so that it had rupiuied the phragm up to mid-abdomen and was causing marked pressure symptoms such as dyspnoea, chest pain and dysphagia. It was the extreme pressure symptoms that led to this emergency surgery after previous attempts at therapy in the form of radio therapy and chemotherapy which did not provide any benefit.
The lesion was difficult to resect surgically not only because of its size but also because as it was adherent to the pericardium and aorta and therefore had to be taken out piecemeal.
Extensive literature search revealed no comparison of the lesion in terms of size and presentation. The largest previous cystic benign teratoma previously in a large study weighed 1820 gms3, while in this case the tumour weighed 19 kg with its cystic fluid and without it weighed 14 kg.